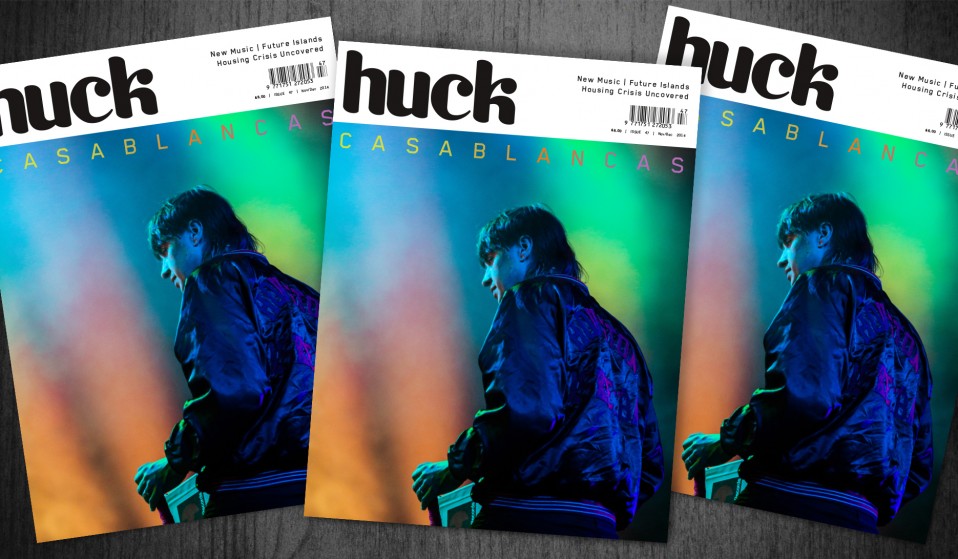 Talking politics, brunch, and post-9/11 NYC with frontman of The Strokes - aka the big JC.

Talking politics, brunch, and post-9/11 NYC with frontman of The Strokes - aka the big JC.

Julian Casablancas, frontman of The Strokes, is ready to speak to power. He’s rallied together a new band – the epicly self-titled Julian Casablancas + The Voidz – and put out his first protest record. He wants to radicalise the mainstream, make edgy the new cool, and expose hypocrisy in politics and music. So, what’s driving this new radical agenda?

In Huck 47, we sit down with the man they call JC, and get an exclusive insight into his vision for social change, his undying respect for under-loved bands, and his newfound (but profound) distaste for brunch.

Elsewhere this issue, we roll back and forth through time to bring you stuff you’ve never heard of (new music, films, photography and books) and untold personal stories behind the headlines you know well.

The Forecast gets ahead of 2015 with cultural tip-offs from the best curators in the game: Norman Records call out the bands you’ll be namedropping come Jan; San Francisco’s City Lights line up your must-read books; LA film freaks Cinefamily bring the popcorn-lowdown for a weird year in film; and Bruno Ceschel of Self Publish, Be Happy gets genuinely overexcited about the revolutionary trends unfolding in photography.

And the new music keeps blaring with our 1990’s Kids special, featuring up-and-comers born in the internet boom: London rapper Little Simz lays down a recipe for success based on the trusty mixtape; Atlanta’s Raury gets busy stealing other people’s fans; Suicideyear lays down minimalist beats from his base in Baton Rouge; Parisian twins Ibeyi pay homage to their Cuban roots; and Brighton-based rapper Ocean Wisdom proves that overnight success stories take years of hard graft.

And the stories keep rolling…

In Rave On we skip back to 1994 – the year John Mayor put the kibosh on free raves with the Criminal Justice Act – and meet the ravin’ stalwarts of a hedonistic scene that’s still fighting for its right to party.

The filmmakers behind new documentary Nas: Time is Illmatic tell us why the rapper’s story is still as relevant as ever.

This is DIY, our ongoing celebration of independence, heads to Brooklyn to meet the artist-activists behind the Interference Archive, who are preserving protest culture history for the masses. And in Rio de Janeiro we spend time with Ballet De Santa Teresa, a non-profit that uses ballet to affect community change in the favelas.

Neck Face lets us hang out in his Hollywood abode, and starts necking vodka at the break of dawn.

And in an exclusive piece of undercover reportage, journalist Heydon Prowse – aka activist-prankster of The Revolution Will be Televised fame – exposes the political machine driving the UK housing crisis, and meets the single mums fighting for their right to an affordable home.

Huck 47 – The Julian Casablancas Issue – is out November 14. Pre-order your copy now in the Huck Shop or Subscribe to make sure you don’t miss another issue.

Linkedin
RELATED ARTICLES
OTHER ARTICLES
Last week, Tower Hamlets council removed its nudity-restricting licensing conditions in a huge win for London’s kink community.
A woman from Texas explains how she was forced to consider the criminal liability she might face for medication abortion over her health.
One year on from the fall of Afghanistan to the Taliban, Tiara Ataii speaks to those who have been forced to make the treacherous journey to Europe for safety, and the barriers and horrors they have faced.
To mark the premiere of his new documentary on surfing giant Gerry Lopez, the filmmaker and former pro skateboarder sits down to share his unique brand of wisdom.
Photographer Bud Glick recounts documenting everyday life in the area, and what it taught him about the Chinese immigrant experience.
Protestors gathered outside Downing Street following the latest atrocities committed by Israel against Palestinians living in the besieged strip.