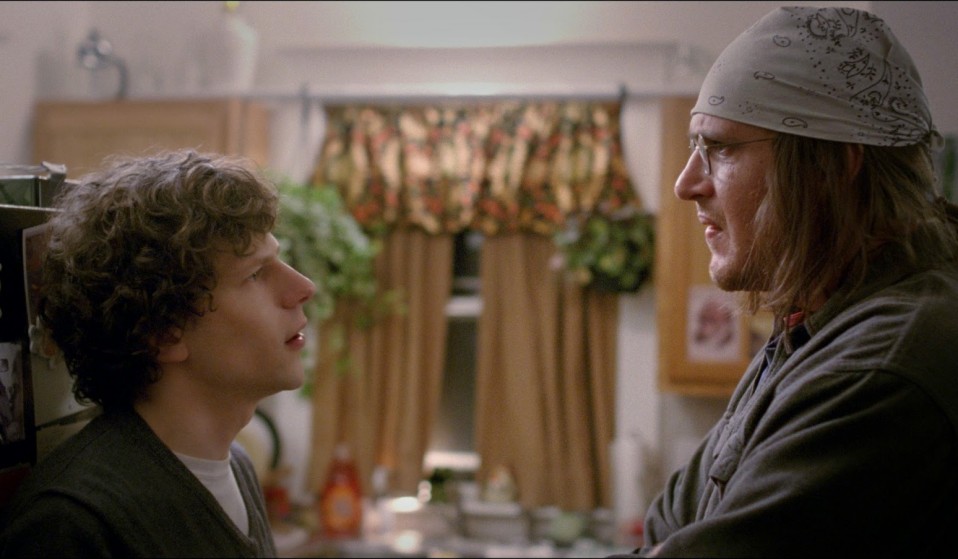 Photography © The End of the Tour

It's time for Sundance's annual serving of exciting, innovative, controversial and divisive indie projects from directors old and new.

An Oscar-winning director takes on Scientology, five days in the company of David Foster Wallace and a prostitution ring run by deaf kids in Ukraine. Provocative films put Sundance on the map and the lineup for its 30th anniversary edition shows that traditions is as strong as ever.

The festival regularly shows some of the most exciting, innovative, controversial and divisive indie projects from directors old and new.

When there are films starring Flight of the Conchords’ Jermaine Clement, a psychosocial study gone wrong and a feminist flipping of the horror dynamic, you’ll be able to completely justify freezing in line in the pursuit of great cinema.

It’s tough to pick 10, but here are the ones that piqued our interest just a little more than the rest…

Ukranian director Myroslav Slaboshyptskiy’s drama tells the story of a boarding school for deaf students. Shot using sign language and without voiceovers or subtitles, it will be fascinating to see how he shows a gang of school kids who specialise in prostitution.

New York, the 80s and the drugs are just some of the reasons Shari Springer Berman and Robert Pulcini’s adaptation of Eleanor Henderson’s 2011 novel looks set to shine this year.

Over-the-top gratuitous violence and a love story across a barren wasteland, this comic book adaptation could be one of the best films involving BMXs you see this year.

Alex Gibney is already bracing for investigation into Scientology to face opposition from the secretive organisation. The Oscar-winning director’s conversations with ex-members of church of Tom Cruise promises to give a look through the keyhole of this peculiar phenomenon.

Keanu Reeves stars in Eli Roth’s thriller about a man whose family leaves him alone for the weekend and two girls knock on his door from out of the blue. Expect tense, psychological drama.

Not your average coming-of-age drama about drugs, gang life and 90s hip-hop. Rick Famuyiwa describes his re-imagining of the average kid finding where he fits in as an homage to the films of his indie director heroes Wes Anderson and Paul Thomas Anderson.

Who doesn’t love Jermaine Clement? The story sounds familiar: a man who’s lost his way. But Clement has proven time and time again that he can take a mundane role and turn it into something bizarre, yet profound.

Flipping the “dude holds woman captive” idea on its head, Reversal, y’know, reverses that notion with the sexual predator guy getting what he deserves when one of his captives escapes.

This drama is based on the the infamous experiment at Stanford University when 24 students assumed the roles of guards or prisoners and, very quickly, lost control. Potentially one of the creepiest and most unnerving films, you’ll see for quite some time.

The End of the Tour

Acclaimed author is shadowed by acclaimed journalist. This biopic is based on David Foster Wallace’s five-day-long interview with Rolling Stone journalist David Lipsky while on a book tour of the United States. Can Jason Segel do justice to Wallace?

For more Sundance coverage, our sibling magazine Little White Lies throughout the festival, which runs to February 1.

Linkedin
RELATED ARTICLES
OTHER ARTICLES
From the chip shops, to the bingo parlors and burlesque dancers, photographer Mike Coles remembers capturing scenes of holidaymakers by the English coast.
Yesterday, rail workers came together to protest poor pay, working conditions and job cuts in their latest round of strikes.
To mark the premiere of his new documentary on surfing giant Gerry Lopez, the filmmaker and former pro skateboarder sits down to share his unique brand of wisdom.
With the Women’s Euros in full swing, last week saw glorious, sweaty celebrations take place in a dedicated, safe space for female and non-binary fans.
As spiralling inflation sees a sharp rise in industrial action, hospitality staff in LGBTQ+ venues are demanding better pay and working conditions.
RaD was inclusive, underground and unapologetically British. Almost three decades after it ceased publication, the people behind its success remember its influence.