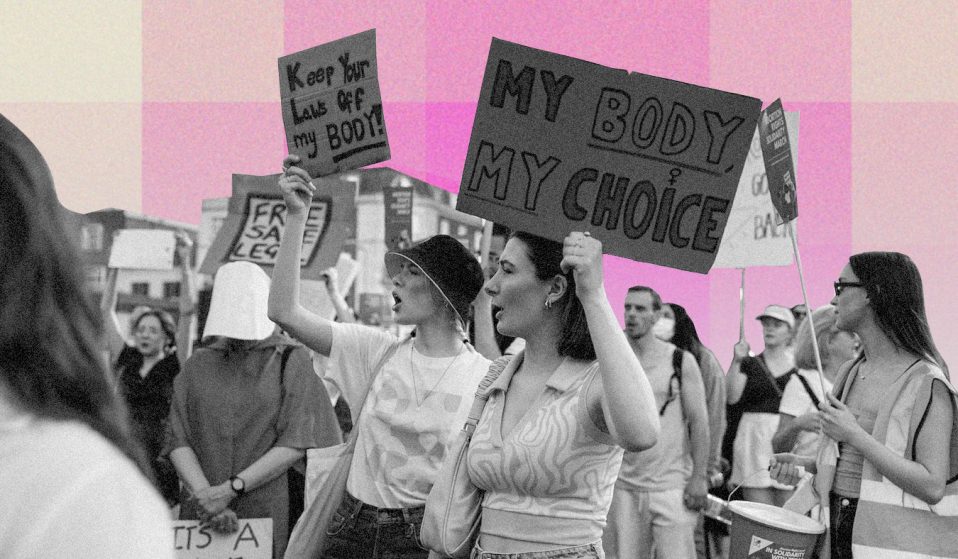 An abortion storyteller talks about the termination of her pregnancy and the harassment she’s received for sharing her story online.

An abortion storyteller talks about the termination of her pregnancy and the harassment she’s received for sharing her story online.

As the fall out from the reversal of Roe v. Wade takes place, states across the United States are fighting their own battles to protect abortion rights.

At least ten states have now banned abortion. In Texas, abortion is illegal under a 1925 law that came into effect after Roe v. Wade was overturned. But another ban – a so-called ‘trigger law’ – is set to go into effect later this month, which will impose civil and criminal penalties for performing banned abortions and prohibits nearly all abortions.

Here, Steph, a 28-year-old Latinx abortion storyteller based in Texas, describes the online harassment she’s faced since Roe was overturned, the importance of destigmatising abortion, and her fears over what could happen next.

I had an abortion when I was in high school; I had just turned 18. I was living in a suburb outside a major city in Texas. I found out while I was in high school that I was pregnant, and everyone knew, so that was really awkward. What’s important to highlight is that regardless of the fact that I’m Catholic, and from Texas, I literally saw that positive test and was like, ‘Oh, I need an abortion’ – there was no doubt in my mind from that moment. But I didn’t know Planned Parenthood was a thing.

The thing that was really difficult was finding a clinic that I could actually physically get to – the closest clinic at that time was about an hour and a half away from where I lived. So I had to figure out how to get there, and I needed someone to drive me there, because you’re not allowed to have the abortion and drive yourself back. I was working at McDonalds and making $7.35 an hour. So the actual cost of what I had to cover for the abortion was about $300, and that was like two of my paychecks.

It was this two week stressful situation, trying to coordinate all these aspects of my life, and skip school. And if you don’t go to class, they call your parents and I was trying to make sure my parents did not find out because even though I wasn’t required to notify them, I was living in their home and they are deeply religious and anti-abortion.

Before the abortion, I was anxious, frustrated – there was a lot of fear. I was still very much a kid. All these years of being shown terrible images of what an abortion procedure involves, and these terrible narratives. And it’s this five minute normal procedure where someone’s holding my hand and I didn’t cry. I wasn’t emotional. It was literally just relief. It was definitely like, ‘Okay, now I can move on with my life’.

When Roe v. Wade was overturned I felt numb. I’ll just never forget it, I woke up and the first thing I saw when I turned off my alarm is The New York Times’s headline: “The constitutional right to abortion has been overturned”, and I was just devastated. I knew it was going to happen, but that didn’t make it hurt any less. I went to bed with certain rights over my body, and I woke up and they were gone. And then the fear instantly is what’s next? I’m a queer person – am I going to be able to get married when I want to? Are my friends going to be able to get married when they want to?

In Texas we’ve been operating with the knowledge that they are going to outlaw abortion and make it completely inaccessible in our state. I think the fear for me is seeing just how far they’re willing to go to restrict people from accessing the right to have their abortion. I don’t feel good about the future of Texas. What I do feel good about is the future of local organising, like with the win in Kansas [the conservative state voted overwhelmingly to keep abortion rights in their constitution] and a lot of the smaller wins that are happening across the country.

I’ve been telling my abortion story for years now and overwhelmingly the response has been positive. But I remember doing a couple of abortion storytelling pieces right after the Roe v. Wade decision and that was some of the worst hate that I’ve ever received (even though I still got a lot more positive feedback). I wrote an article and a Trump-aligned Republican candidate found one of my articles where I described getting an abortion as empowering, and he tweeted about it and they added me and ever since then I’ve been a lot more careful about sharing things on my Twitter. My inbox was full of really scary people threatening to dox me, it was really bad.

It does more good to talk about my abortion, because that’s exactly what anti-abortion activists want; they want me to stop talking about my abortion. They want their narrative to be the one that dominates, which is that people who get abortions are these evil, careless, terrible people. And that’s literally just not true. I’m just a normal person who had a normal procedure with a normal life experience. I’m not going to be silenced.

Overall I’m hopeful. I think that the work that abortion storytellers do is so vital to destigmatising it. I think if people get enraged, they’ll realise the significance of this fight.

This interview has been edited for clarity and brevity.

Linkedin
RELATED ARTICLES
OTHER ARTICLES
Rogue landlords are exploiting young and inexperienced renters and leaving them in mental and financial turmoil, reports Niall Hignett.
Financial turmoil is pushing people who work in the sex industry into more dangerous and desperate situations as a means of survival.
Sean Maung’s photos are a love letter to the Black and brown communities that make up New York.
Rhiannon Adam spent three months capturing an ageing society wracked by division, isolation, and the aftermath of scandal.
The idea that a younger generation is abandoning work has become a popular narrative online, but it doesn’t necessarily reflect reality.
Cindy Campbell recounts how her brother ushered in a new era of musical culture at a party she held in the Bronx in ‘70s.