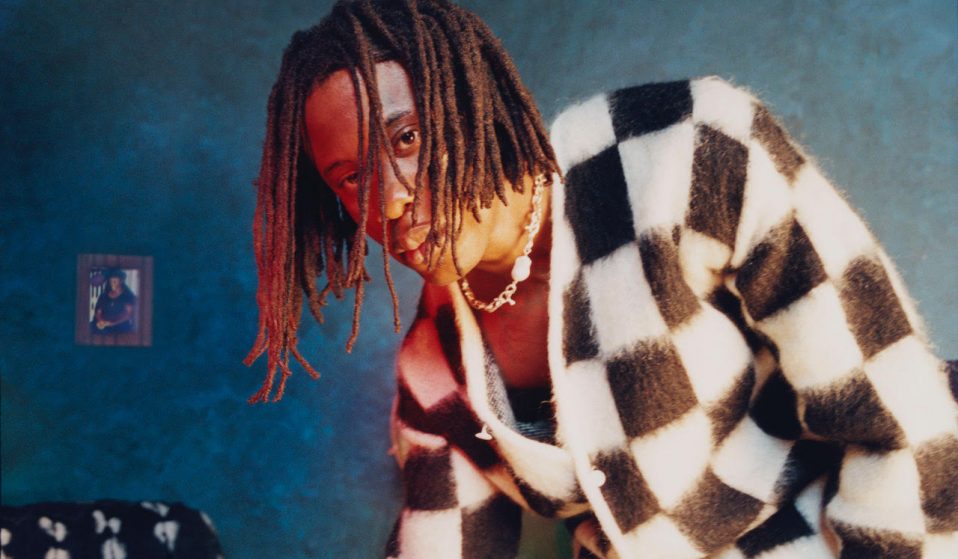 As he gears up to release his debut album, the Nigerian-born, London-based musician talks refusing to be boxed in and tackling politics head on.

As he gears up to release his debut album next year, the Nigerian-born, London-based musician talks refusing to be boxed in and tackling politics head on.

Obongjayar has achieved a lot for an artist only just preparing to release his debut album. The South East London-based producer and vocalist already has an Ivor Novello Award to his name (his track ‘God’s Own Children’ won the 2021 Prize for Best Song Musically or Lyrically), as well as having scored collaborations with luminaries such as Danny Brown, Little Simz, King Krule and Pa Salieu.

His music reflects his life. Born Steven Umoh and raised in Nigeria, he moved to London aged 18 and immersed himself in the capital’s underground hip-hop scene before leaving to study at Norwich University of the Arts, where he learned to embrace his experimental tendencies. The result is an unclassifiable, idiosyncratic sound, borne from afrobeats, hip hop, wonky soul and countless other forms, but amalgamated into a final product that moves beyond the remits of any of its constituent parts. What Obongjayar creates is shockingly new and – just as importantly – defiantly outspoken, reflecting a regenerated, young British voice. Obongjayar’s music makes sense not because of how easily it fits into the present or the past, but because of how well it seems to predict the future.

Huck caught up with Obongjayar to talk about what was on his mind during the making of his upcoming album due to be released in April, the political event from his home country that inspired its lead single and the importance of being yourself.

How do you spend your mornings?

I try to get at least two hours’ walk every day, just to be out in the world and come up with stuff.

Are you writing when you’re doing that?

Yes, for the most part I’m writing, listening to stuff, reshuffling and editing, thinking about my work and thinking of new ideas. There’s always something going on in my head, I’m always doing something and working on something new. I’ve finished this album and I’m already working on the next thing. You know how when you’re in the shower, you come up with your best ideas? Because you’re not actively thinking, you’re doing something else. That’s kind of how it works when I’m walking too. It’s also very stimulating just to be in the world and just to have a new lens on stuff, instead of being stuck inside staring at your screens.

Your album is due out in April. From the outside, it actually feels like it’s been a long time coming.

Obongjayar: It’s felt like a long time coming, but I’m only now actually ready for it. I’ve always been of the belief that you don’t rush an album. You can have projects, EPs out before where you’re testing the waters and finding what your voice is, but an album is such a full thing. My favourite albums are albums that have had something to say sonically, lyrically or visually and are usually very well put together. They give you an insight into where the artist’s head was at. That is why I felt I was finally ready to do [an album] – my ‘Obongjayar’ voice was ready.

Your EP Which Way is Forward came out at the start of 2020. When did your attention fully turn to work on the album?

Obongjayar: The record was already in my head before Which Way is Forward, I already knew what the idea for it was and what I wanted to talk about, but I didn’t know what it felt like yet. Which Way is Forward and the experimentation on that, especially with how I can use my voice, from the high-pitch thing to the gravelly thing – it was a learning experience. And now, with this record it’s like, ‘OK, I get it! I know how to manipulate these things now and bring it all together and it feels cohesive.’

Obongjayar: Absolutely, and just letting go and being honest. It’s like looking in the mirror – when you look in the mirror, you know what you look like, man, you can’t lie to yourself. You can’t say you’ve got blue eyes when your eyes are brown. It’s very easy to talk about other subjects and politics and not check yourself; you have to check yourself. I was talking to somebody about politics and how terrible everything is, and I said, ‘Well what would you do? If it was you in that position, how would you handle it, how well would you deal with it?’

It’s a practical mindset: ‘What can we do pro-actively here to make something better’.

Obongjayar: It starts here. What are you doing in your situation that is better than what said person is doing to the country, or whatever.

The first single from the album, ‘Message in a Hammer’, tackles politics head on. Can you talk a bit about that?

Obongjayar: I wrote that the morning after the Lekki Tollgate Massacre [in October 2020, the Nigerian Army opened fire on protesters at a tollgate outside Lagos, with multiple fatalities]. It ties into opportunity and what that means. We’re in a position where we can see it, we’re fucked. Something needs to happen, there needs to be that pushback from us, because if not and we don’t call these people by their names and there’s no action being taken, then things are just going to stay the same. And it’s about being ready for that, I’m willing to go to prison and be shot, I’m willing to take the repercussions for this pushback. I’m ready for it. Do that to me, you can beat me, you can shoot me, you can throw me in jail, I’m ready to take those so-called consequences. That’s why it’s the first single – it’s a mission statement and sound-wise, it gives an idea of what’s coming next too.

It’s a practical way of expressing real, legitimate anger. It’s asking the listener, what are you going to do about it?

Obongjayar: What are you willing to risk for this thing that you want? Because it’s not going to come easy. They’re not going to just give it to you, it comes at a cost. It’s funny, when the record came out, my mum called me and said, ‘They’re going to blacklist you in Nigeria’, that’s the reality of it. It’s not as black and white as that, but it’s a thing that is a possibility where I come from. I live in the UK on a stay visa but I don’t have a British passport, so I haven’t got an escape plan. So it’s about saying, ‘This is how I feel and I’m not scared to say it. I’m angry, and I’m pointing fingers at the motherfuckers that did that shit.’

A lot of people will have discovered your music via the collaborations you’ve done with Danny Brown, Little Simz, Pa Salieu and so on – but the album is almost entirely you. Did you consciously want to make the album predominantly guest-free?

Obongjayar: The music I make isn’t quick or easy. It doesn’t sound like anything else, it isn’t in competition with anything or anyone because it’s so by itself with its own voice. So the collaborations have been sick, I’m grateful for them, because they allow me to venture out into other spaces that I might not necessarily have existed in. I can do that and that’s cool, there’s nothing wrong with that, but I want to make a new thing. I’m trying to create a new thing here and that’s the focus for me here. You can’t necessarily put me in a genre, I have lots of influences, but my music is specific to what it is that I am, it’s my being and my essence and my perspective. It’s not hip-hop or afrobeat, it’s just me.

Linkedin
OTHER ARTICLES
Over a dozen Stop Deportation activists locked themselves to each other outside a detention centre to prevent coaches taking those due to be on the Rwanda deportation flight from leaving.
A new edition of a seminal book brings together iconic images of the band onstage in their full glory and backstage in moments of unguarded camaraderie.
In her new book, the author explores the country’s housing crisis in human terms and calls for radical action to address a broken system.
In the latest instalment of Photographers in Conversation, the chronicler of raves, protests and beyond explains why he’s drawn to such specifically visceral environments.
Whether it's partygate, the climate crisis or the spiralling cost of living, the fightback begins on the picket lines writes Tommy Vickerstaff
The past five years have seen a staggering increase in foodbank usage across the UK. Now, staff fear things are set to get much worse.