Art & Culture / Inside the complex world of ex-Mormon TikTok 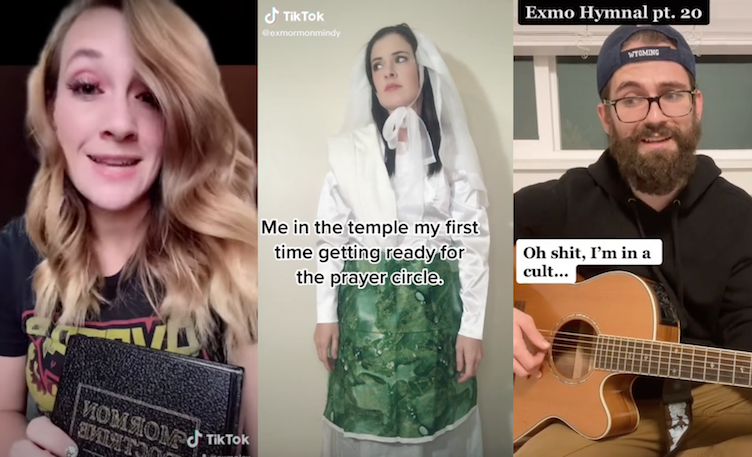 ‘Exmos’ are flocking to TikTok to share their stories of leaving the LDS Church and building supportive communities which are helping them to heal.

‘Exmos’ are flocking to TikTok to share their stories of leaving the LDS Church and building supportive communities which are helping them to heal.

“My goal on TikTok was never to convince people to leave the Mormon Church,” says Mindy, a 31-year-old who lives in Utah, where 14 per cent of the Mormon population live. “I was just hoping for a thousand viewers, then I know I’m not alone and know I’m not crazy.” Mindy left the Mormon Church (also The Church of Jesus Christ of Latter-Day Saints, or LDS)  in November 2019. In less than a year, she has amassed 118k followers on TikTok and over 2.9 million likes. She is one of the biggest voices on #exmormon TikTok.

In her videos, Mindy “pokes fun” at what she now sees to be the more ridiculous aspects of her life as a Mormon. These include not being able to drink coffee, having to wear ‘protective temple garments’ (underwear that covers your shoulders and your knees), and giving 10 per cent of your income to the Church. “I decided I want to do it in a comedic way because I deal with trauma through humour,” explains Mindy.

Beyond what you can eat, drink, and wear, the Mormon Church also represses racial, gender, and sexual equalities. Judy, a 48-year-old in Salt Lake City, Utah, left the Church three years ago at 45. “I was living in a heterosexual marriage, knowing that I was queer, but I was so devoted to Mormonism that I was going to try and deny that queerness and be the best Mormon I could,” she tells Huck. Judy first came to TikTok for the queer community, but, she says, “The algorithm is really smart and started showing me more and more ex-Mormon videos.”

Franklin, aged 25 and living in Orem, Utah, joined TikTok to boost publicity for his new album about his faith crisis. One day he put up a video of a Mormon hymn, but with new lyrics (“hail to the Charleton that hid his polygamy, stole from the masons, and gave us secret names”), which he sings into the camera. “I couldn’t believe the positive reaction from people saying ‘This helped so much, I’ve had these hymns stuck in my head and now I have different lyrics to sing to them,’” Franklin says.

Often what sparks a ‘faith crisis’ is when a member finds problems or inconsistencies in the Church’s scripture. Many ex-Mormons (also known as ‘exmos’) cite moral issues in learning that the founder, Joseph Smith, had dozens of wives; some were married to men that Smith sent on missions, others were as young as 14.

“Stuff like that is really common knowledge to a lot of people that aren’t members, but the Church kept it from the members,” says Lexi, a 27-year-old living in Idaho, whose family goes back seven generations to the original pioneers of Mormonism.

When Mormons do their own research, many of Smith’s teachings – such as the claim that there wasn’t life on earth until 6000 years ago – begin to raise doubts. “If you accept the possibility that Joseph Smith was a con artist, all of a sudden, everything falls into place, and you realise: ‘Oh, my god, I was born and raised in a cult.’ And that blows your mind at the age of 33,” says Mike, a 52-year-old based in Arizona, who left the Church in 2002. When issues like this are raised in videos, there can be pushback from Mormon TikTok, saying that ex-members have been led astray by Satan.

The structure of Mormonism makes the idea of leaving fraught with difficulties and fear. “There’s a quote from the Church which says ‘doubt your doubts’,” explains Franklin.  “I was so scared that if I don’t believe in this Church, what do I believe? What implications does that have on my future and my existence after death, is there anything after death? It was horrifying, the guilt, the fear, the unknown.”

Leaving the Church means having to leave behind a community, cut off family and friends, and sometimes even partners if they remain believers. “With my TikTok, I just wanted to build a community of support for ex-Mormons, the first few months after I left, I literally didn’t know who I was anymore, what am I outside of Mormonism?” Mindy tells Huck.

“The ex-Mormon TikTok community is super supportive. It went from just being a thing to do for laughs to something that I really find joy in, being able to help other people and have them help me,” explains Franklin. He also has no intention to use his platform to tell anyone to leave: “I know how hard it can be, if people are happier in the Church, then just stay.”

But while many exmos are using TikTok to build a community, Mike wants his message to extend outside of this immediate sphere. “I want to educate the world about Mormonism, so I can kind of cut Mormonism off at the knees by taking away their potential converts.” He says that to date, using YouTube and TikTok, he has helped 1300 people leave the Mormon Church, “and that’s just the ones who have contacted me”.

TikTok is providing the ex-Mormon community with something different from other social media platforms in offering the perfect balance of anonymity (“a safe haven because we’re mainly speaking to strangers,” explains Judy), personal connection and creative expression. The subreddit r/exmormon has been a source of information and humour for exmos for years, however, posts are often fleeting and faceless.

On the other end of the spectrum, Facebook offers no anonymity. “Once I was out and vocal, I started posting,” says Lydia, a 43-year-old in the Pacific Northwest. “I definitely stirred up a lot of trouble with friends and family with my Facebook.”

TikTok makes it easier for some exmos to speak out about their experiences without their family finding out, which could inadvertently damage an already strained relationship – if they’re still in contact. But when believing families do find out, the fallout can be colossal. Mike’s partner of seven years left him last month because her family – who are active members of the Church – found out about his TikTok. Ultimately, she was made to choose between Mike and her grandchildren.

The tag #exmormon on TikTok currently has 178 million views and is growing steadily. Although some videos offer comedic value, especially to those who have never been in the Church, this is a space for processing pain and trauma for many. “I don’t want people to have to be quiet like I was because there’s so much indoctrination and pressure not to leave the Church,” says Judy, “I want them to know that they don’t have to struggle silently, there’s support and it’s OK.”

Linkedin
RELATED ARTICLES
OTHER ARTICLES
After news broke last week around an expected reversal of the 1973 landmark law that made abortion legal in the US, protestors gathered in the UK in support of American women.
The answer to improving the well-being of Palestinians rests not with individualised solutions from the Global North, but with ending settler colonialism.
A group of Ukrainians living in Poland are helping Ukraine withstand Russia’s brutal invasion by buying supplies and shipping them directly to the war’s frontlines.
In the last of our dispatches from OFFF Barcelona, Rufus Deuchler and Vincent Gault discuss the future of creative process.
Members of the collective share some of their reasons to run as part of #UnitedBySummits, a campaign that looks to uncover transformative power of the outdoors.
The revered showbiz chronicler recalls his journalistic beginnings, documenting subcultural scraps in the ’80s.