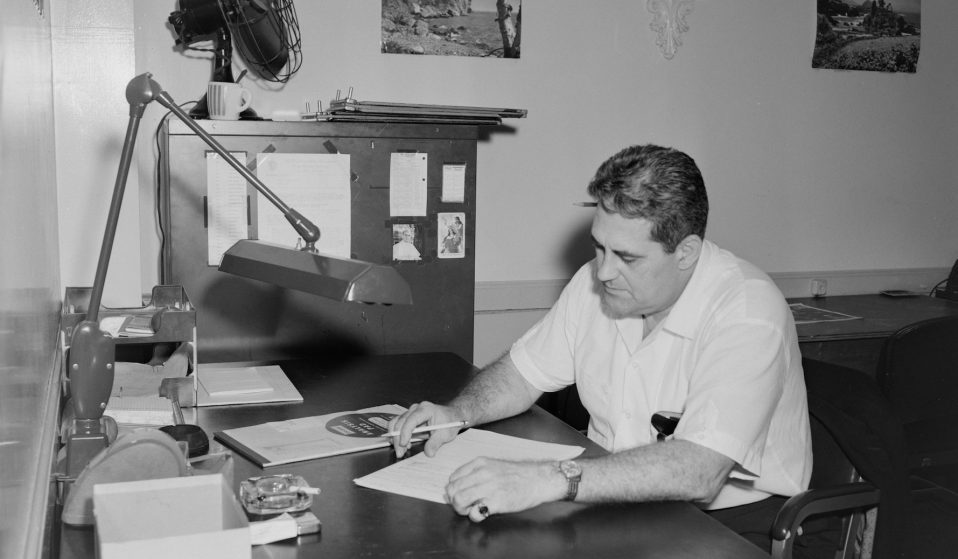 As the Covid crisis exacerbates and exposes the problematic structure of work, the subreddit r/antiwork are asking: what if the issue with work was work itself?

As the Covid crisis exacerbates and exposes the problematic structure of work, the subreddit r/antiwork are asking: what if the issue with work was work itself?

Work as we know it is slowly, but surely, killing our collective spirit and the world we inhabit. Though working hours have decreased since the 19th century, people find themselves overworked and underpaid in even the most affluent countries. In the UK, wages have stagnated disproportionately in the past decade while productivity rates have climbed. Currently, the national living wage only scratches the surface of supporting the livelihood of working families on the poverty line.

Our borderline religious belief in work (known as “workism”) as a source of identity and community operates under a myth of progress – that work can improve the world and our personal lives. Yet work continues to be poorly distributed, wage theft is rampant, debt is normalised and working conditions are increasingly precarious – especially in the context of the Covid crisis. Put simply by Andy Beckett: “Work is not working”.

So, what if the issue with work was work itself? The r/antiwork subreddit is one of the largest online communities attempting to tackle this question, with a following of 235,000 members (or “idlers” as they’re affectionately known in the group – a wink to the term’s Protestant origins). Under the header “Unemployment for all, not just the rich!”, the community, according to its bio, offers room for “those who want to end work, are curious about ending work, want to get the most out of a work-free life, want more information on anti-work ideas and want personal help with their own jobs/work-related struggles”.

The Covid crisis has deepened and exposed the problematic structure of work. Union-busting is on the rise in Europe, people are being made redundant and even “essential” workers have become disposable, working in unsafe labour conditions. Thankfully, it’s also a time of gradual acceptance towards the four-day workweek and mutual aid networks. It should come as little surprise, then, that the anti-work subreddit has more than doubled in size since March 2020.

The group’s header sadly reflects the hidden costs of unemployment. The threat of denying work, which means scrapping benefits prioritised for workers, is severe. Left with fewer options, unemployed people often have to choose between their personal safety and income. It’s a double-bind that members in the anti-work subreddit are aware of. “I don’t believe our only options in life should be to be born into wealth, to work all the time or to die of starvation or exposure,” one member of the subreddit tells me. In this context, George Monbiot’s definition of progress as the “speed at which we destroy the conditions that sustain life” is accurate in describing our own self-destructive employment system.

Do I want to work for other people? NO. Do I want to be an entrepreneur? Also NO. pic.twitter.com/3HCDXLZprE

Psychologically, the piling demands of work breed unhealthy competitiveness with others and estrangement from ourselves. In a New Yorker article titled ‘Improving Ourselves to Death’, writer Alexandra Schwartz satirises the seemingly never-ending list of solutions for our lack of productivity. The rise in self-help, “corporate social responsibility”, the building of open offices and our encouragement of work-life balance reflect only a few attempts to manage work satisfaction. They also reveal our tendency to react with band-aid solutions for structural issues.

Posts in the subreddit reveal that, despite members’ best efforts to find meaning in their work, certain feelings of listlessness and depression can’t be fixed by work-life balance. As a side-effect of “hustle culture”, the pressure for economic security shifts our view of every waking hour, turning each one into a potentially profitable unit of time. Members bemoan that we’re turning even our hobbies into side-businesses.

The anti-work movement is not a new one. It has roots in the utopian writing of Charles Fourier, Thomas More and Marxists such as Paul Lafargue and Franco “Bifo” Berardi. It later manifested itself through the New Left, Labour movements in the ’80s and the work of anarchists such as Bob Black. More recent written contributions have seen the emergence of a parallel movement called “post-work”, which supports full automation of routine and service jobs. Some post-work activists are also Universal Basic Income advocates.

Though complaints of work are commonplace, to the average working person, even the mention of finding an alternative to work is a radical move. The fight for the eight-hour day, coined by socialist Robert Owen, was so arduous that the balance of “eight hours for work, eight hours for sleep and eight hours for what we will” became ingrained. Our gut reaction – like many who direct backlash at the subreddit – tells us that to demand less is laziness.

Dr. Devon Price, social psychologist and author of Laziness Does Not Exist, tells me that this fear is misplaced. “The slothful, evil force that we call laziness is not a real thing we need to fear. Laziness is a lie. No one chooses to fail or disappoint. No one would actively choose to lack the motivation to do the things that matter to them,” they argue. The issue with work, then, must be larger than face-value laziness.

Though views in the anti-work subreddit are split: most agree that what we need is a redefinition of work, as opposed to complete abolition of work. One member tells me that “Being anti-work isn’t about not working, but about questioning and criticising the way work, wages and the job market, in general, are structured.” For others, it’s not anti-work as much as it is anti-meaningless work, aligned with David Graeber’s manifesto in Bullshit Jobs. Many more are opposed to work under capitalism – that is to say coercive work – than the idea of work itself. For Price, this coercion exists as the “hatred of laziness makes it hard to say ‘no’ as ‘yes’ is viewed as morally superior – it fundamentally has eroded our perception of consent”.

Ezra*, 29, an artist based in New York and a member of the anti-work subreddit, chose to pursue their own work by starting their own business. “I was sick of being owned to the point of almost-slavery by bosses who drained all of my time for years. I got out, and I want that freedom for others who seek it,” they explain. 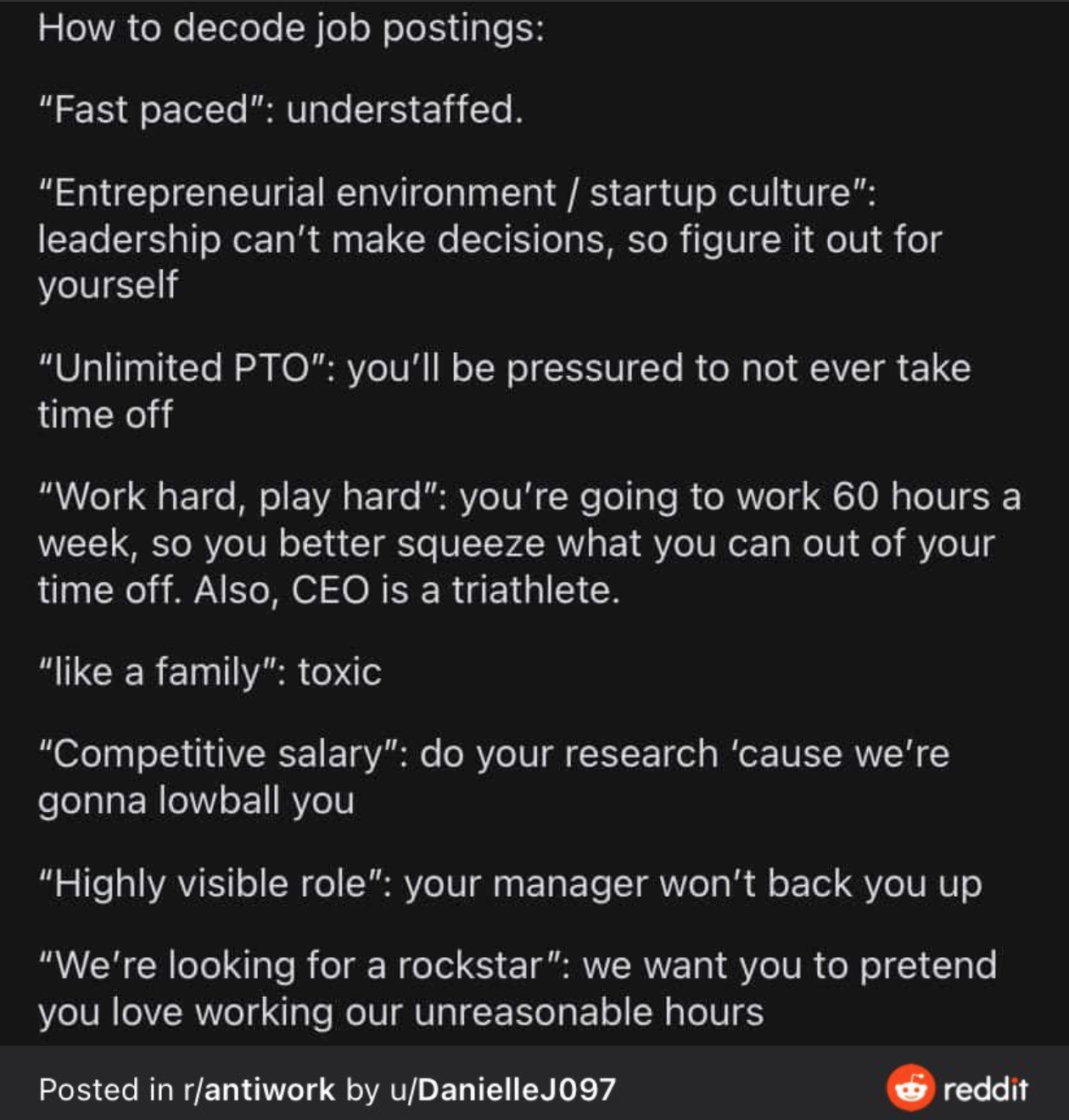 Another fundamental part of the anti-work movement is the demand for the right not to work. Artist and disability rights activist Sunaura “Sunny” Taylor, who was born with arthrogryposis, has written about how disabled people often internalise the guilt of being “non-productive” in a society that demands independence and self-sufficiency. For her, the right not to work is about “cultivating a sceptical attitude regarding the significance of work, which should not be taken at face value as a sign of equality and enfranchisement”.

Tim*, a member of the subreddit from Germany, confirms that these pressures are real. “I can’t count how many times I was personally attacked, questioned, or dismissed when stating that I can’t work for medical reasons,” they say. Though Tim acknowledges that unemployment benefits are better in Germany than in other countries, the social stigma of being unemployed also forces people into risky, underpaid jobs.

What would a world without work look like? r/antiwork member Karma, 41, based in California, tells me about the potential of labour under a gift economy: “My own dishes at home may languish in the sink, but if there are dishes to be done for community service, or if I am at someone’s house and they have made me dinner, I am eager to do the dishes,” she says. “When we are in spaces where our labour is not reduced to tit-for-tat (i.e., income), and people act purely out of a desire to contribute, people become very excited about work.” Karma also explains that being anti-work goes hand in hand with being anti-consumerist. Fundamentally, either the demand for production or the supply of production itself would have to change in order to shift the labour market.

Nonetheless, the advent of automation is inevitable and with it, the status of work will keep changing. In the short-term, it will likely create structural employment. In the long-term, post-work activists believe that we’ll be given more time for self-development and flourishment. This optimism is echoed by another subreddit member Diana, 34, based in Washington: “I believe that, without the pressure to work, people would be capable of so many fantastic, inventive, innovative, and pure genius things.” Even with automation, questions such as income inequality, climate change and power diffusion would still have to be addressed – something which would, ironically, require more work.

Whether the upswing in online radical spaces will lead to any real structural change is unknown, however, it shows that the disillusionment in work is a felt reality for people who aren’t necessarily activists. This, according to researcher David Frayne, is the first step in opening the doors of discussion to change. Importantly, it helps people deal with the dissonance felt between “the mythical sanctity of work and the troubling realities of people’s actual experiences”.

All members I spoke to expressed that they had felt isolated in their anti-work views before finding the subreddit. “I find it helpful to be a part of a community that reminds us that it is OK to slow down, that there is more to life than work,” Karma tells me. Now might be a better time than ever, when asked to take on yet another side-hustle, to answer with the refrain from Bartleby, the Scrivener: “I would prefer not to.”

*Names have been changed to protect the identity of individuals

Linkedin
RELATED ARTICLES
OTHER ARTICLES
The workforce is now gearing up for industrial action after receiving a measly pay rise, reports Ella Glover.
Financial turmoil is pushing people who work in the sex industry into more dangerous and desperate situations as a means of survival.
With skyrocketing rents, packed out viewings, bidding wars and more, renting in London has never been harder.
Ahead of the release of their first collaborative album, the producer and rapper talk psychedelics and the state of UK hip hop.
Yesterday thousands gathered outside Buckingham Palace after news of the Queen’s death broke.
As the Scottish government announces a rent freeze, an activist with Living Rent who fought and won shares how they did it, and what must come next.