Art & Culture / Inside the weird world of Christian tourist attractions 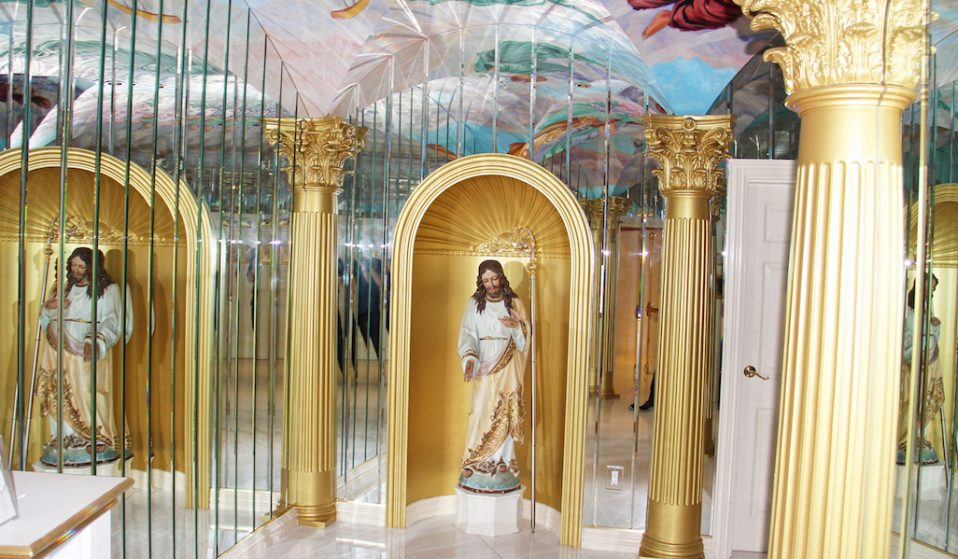 Photographer Jamie Curtis Lee Taete recounts documenting various Christian tourist attractions around the world at a time when these institutions find themselves in decline.

Photographer Jamie Curtis Lee Taete recounts documenting various Christian tourist attractions around the world at a time when these institutions find themselves in decline.

Most of my photos are of people who have broken off from mainstream society and created their own worlds in some way – from LGBTQ+ communes, to Juggalos, to people who refuse to wear masks because they don’t believe Covid exists. And one of my favourite ways to explore these worlds is by looking at the ways they interact with the capitalist system we all live under – merchandise, tourist attractions, themed restaurants – because I think it gives the viewer something to relate to.

The photos from my series documenting Christian tourist attractions were taken mostly in the US, specifically Florida, Arkansas, Kentucky, California, and Missouri. There’s also a photo from the UK, and one from Hong Kong. If I had more money, there are a bunch of Christian attractions in Latin America that I would’ve loved to have visited. 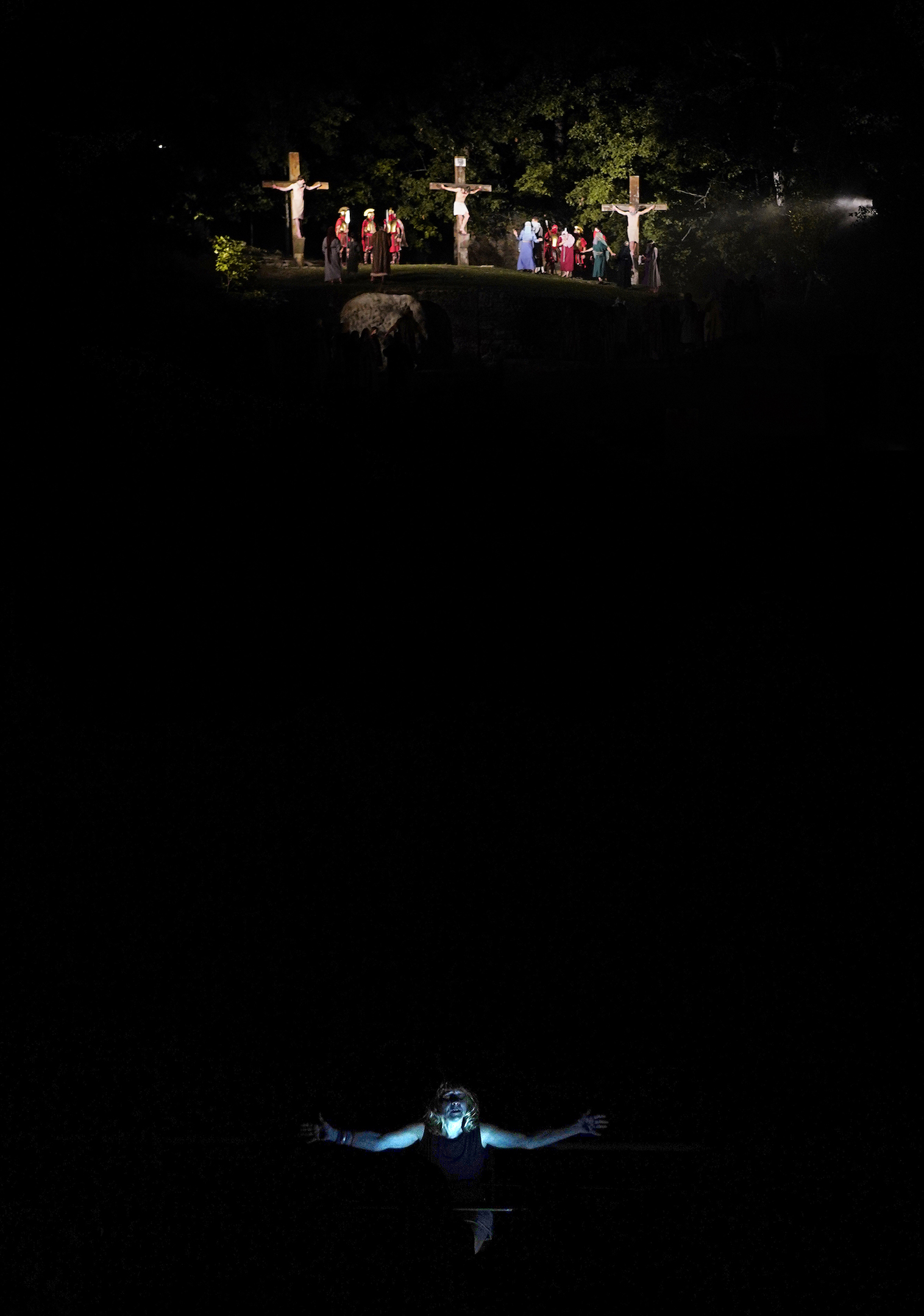 A sign language interpreter narrating the crucifixion of Christ at the Great Passion, Eureka Springs, Arkansas

The most famous attraction was the Holy Land Experience in Florida. It’s been billed as the Christian alternative to Disney World, and is just down the street from the regular Disney World in Orlando. It’s themed after the streets of old Jerusalem, and has biblical mini-golf and – surprisingly gory – daily reenactments of Christ’s crucifixion. Or it did once: they laid off most of their staff just before the pandemic and closed indefinitely. When I went to take the photos, the security people guarding the site told me it was closed for good and would be getting demolished soon to build a hospital or something. There were workers removing all of the religious statues. It had a real ‘Solomon’s Temple’ kind of vibe.

The most strange place I visited was probably the Noah’s Ark theme park in Hong Kong. It was right next to a derelict fishing village, the residents of which had been forcibly evicted to make way for the Ark. The attraction was enormous and I saw maybe five other visitors in the two hours I was there. The emptiness, coupled with the fact that people had been forced out of their homes to build it, made the whole place feel sad and a little creepy. 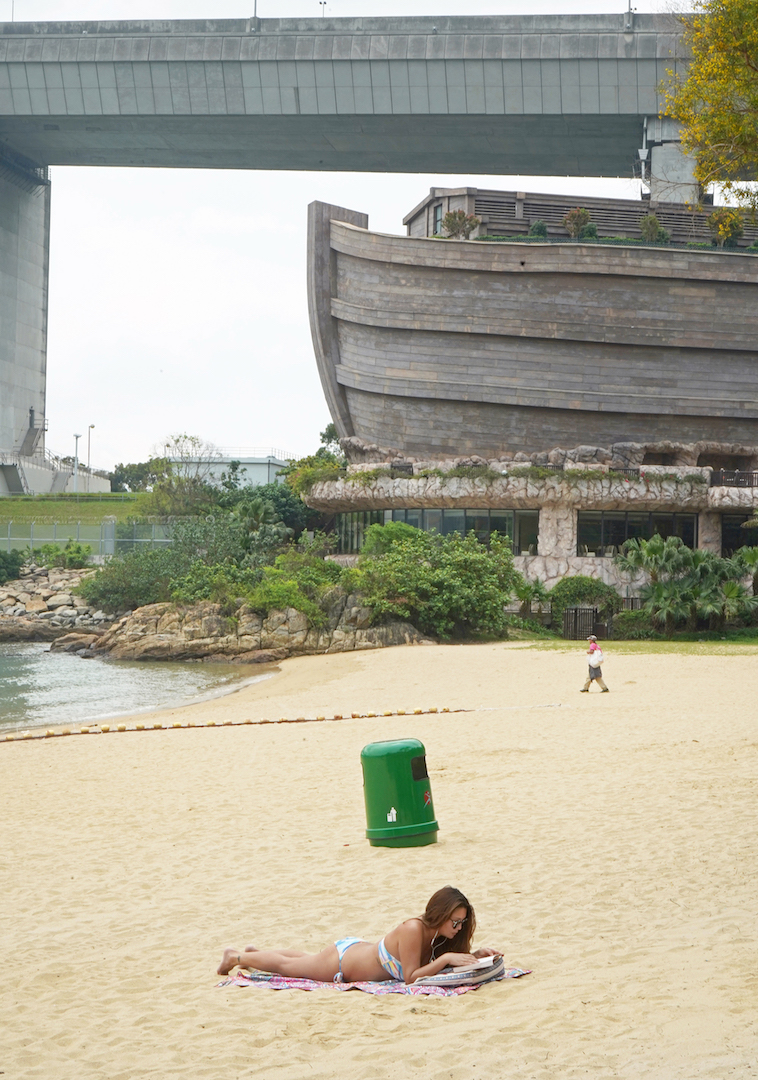 There definitely seems to have been a downward trend overall in the popularity of these things. A couple closed permanently during the pandemic. And people that worked at some of them told me their visitor numbers had been steadily dropping for years before that. I think that’s for a few reasons. The biggest one being that people are becoming less Christian in this country. What was once a supermajority of white Christians – more than 80 per cent of Americans identified as such in 1976, and two-thirds in 1996 — has now plateaued at about 44 per cent.

The other big factor is that, in my experience, these attractions are not interesting enough to compete with secular attractions. They get too bogged down in bombarding their visitors with information. Like the Noah’s Ark theme park in Kentucky. Though it’s frequently referred to as a theme park, there aren’t really any of the rides or big entertaining experiences you’d usually associate with a theme park. It’s mostly just wall after wall of incredibly wordy signs explaining fossils and the layers of the earth’s crust and how that proves evolution could never have happened. And with how expensive some of these are (last week I went to the Creation Museum in Kentucky, and my ticket with parking was $50; definitely the most I have ever paid to visit a museum – it’s about three times as expensive as the Louvre!), it feels like the majority of families are going to opt for something secular that’s more likely to keep their kids entertained for a few hours. 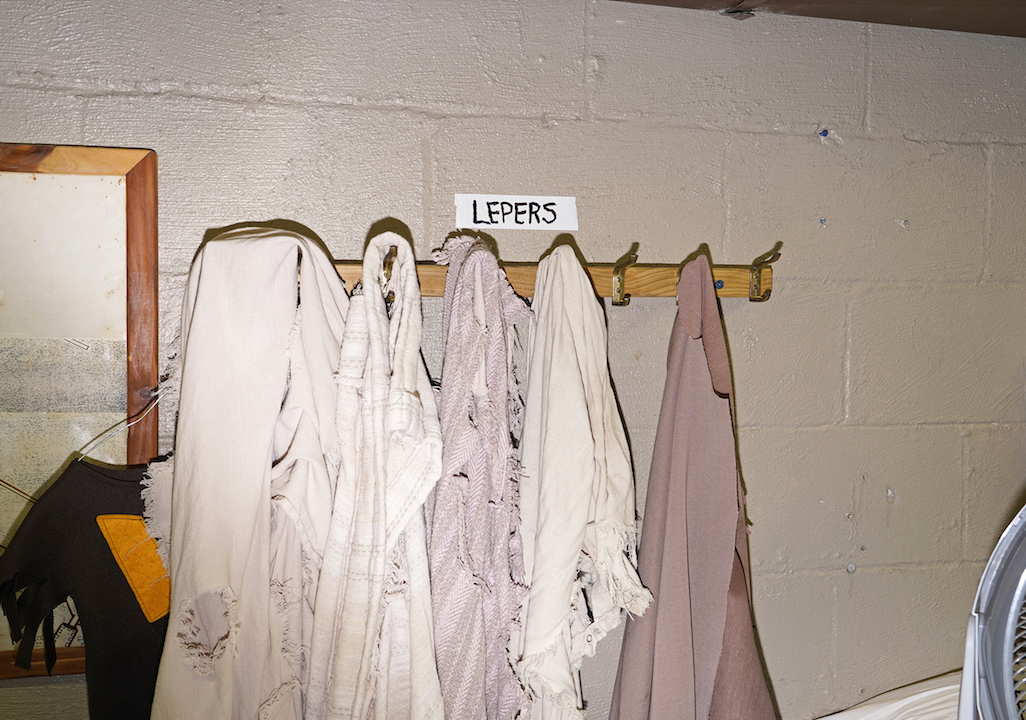 Pretty much everyone I met at these things was incredibly pleasant – or at least they were while speaking to me. I’m queer, and a few of the places I visited quite explicitly promoted anti-queer beliefs. The Creation Museum in Kentucky had a kids’ book in the gift shop about how marriage should only ever be between a man and a woman. So while the staff there were very friendly to me when I interacted with them, I would consider the fact that they’re trying to indoctrinate children into bigotry (that is specifically opposed to my existence) to be a touch unwelcoming!

The only bad interaction I had with a person was at a themed resort in Missouri called Morningside, which was started by the televangelist Jim Bakker. I hadn’t asked for permission to visit, and when the people working there saw my camera, they sent over a very angry man with a gun to yell at me and escort me off the property. The gun wasn’t pointed at me or anything, it was just in a holster on his hip. But, maybe because I’m not American, I find being yelled at by a person with a gun anywhere on their person to be quite a jarring experience.

Another – more pleasant – memory that will stay with me was visiting the recreation of the crucifixion of Christ that I saw at a place called the Great Passion Play in Arkansas. It was staged on this enormous set built into a hillside, with live animals, special effects, and over a hundred actors. My enjoyment of it could have been heightened because it was one of the first things I did after emerging from months of quarantine, but it genuinely blew me away. It was one of the best live theatre experiences I’ve ever had. 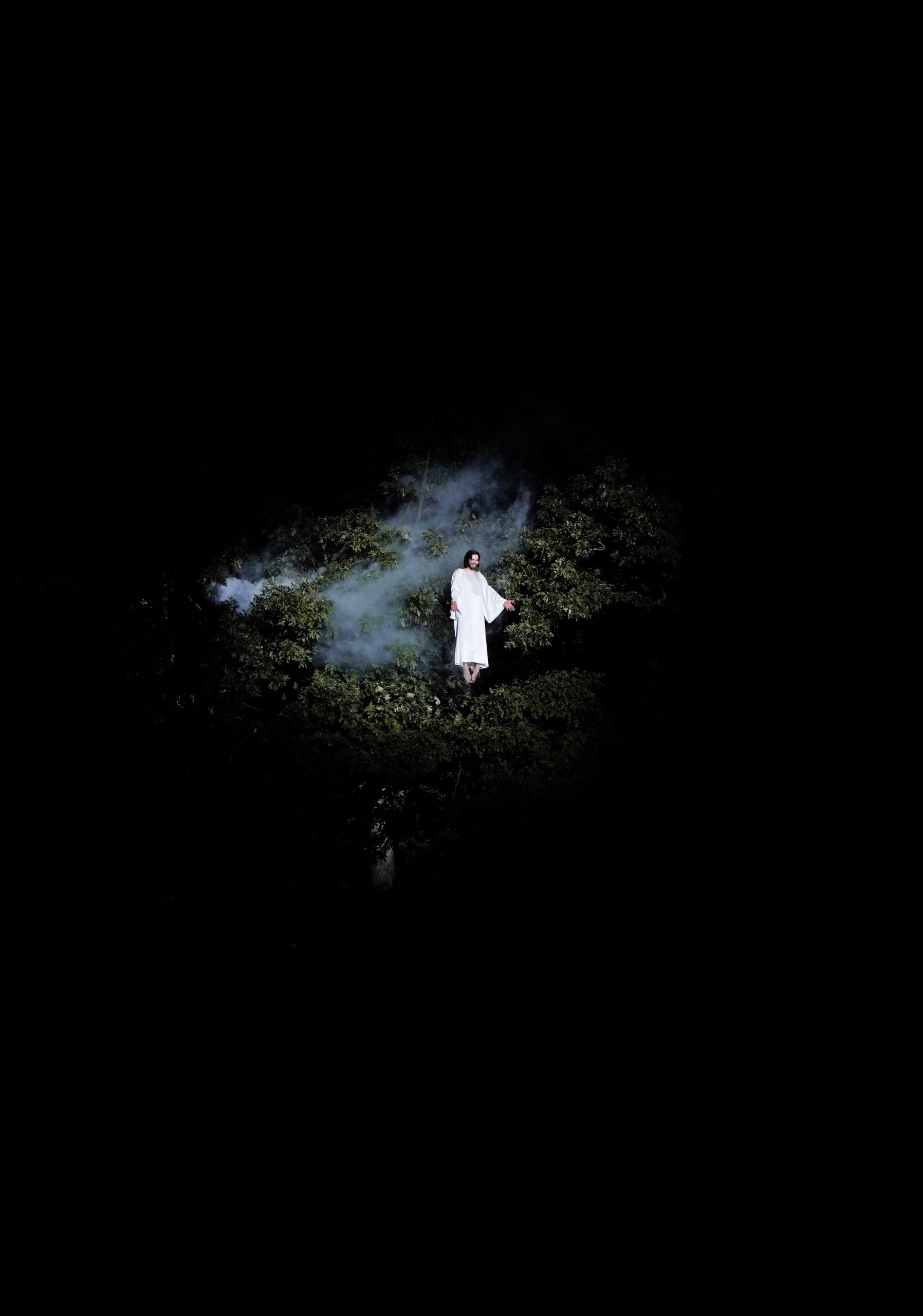 Jesus ascending to the heavens during a performance at the Great Passion Play, Eureka Springs, Arkansas 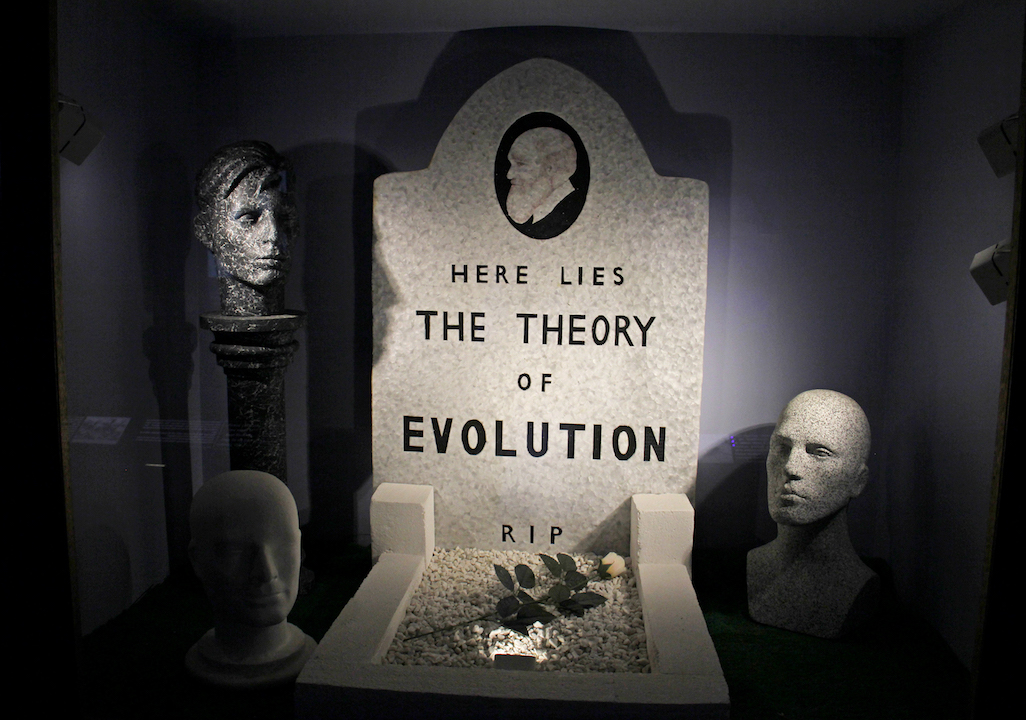 A display at the Genesis Expo Creationist museum in Portsmouth, UK, July 2014 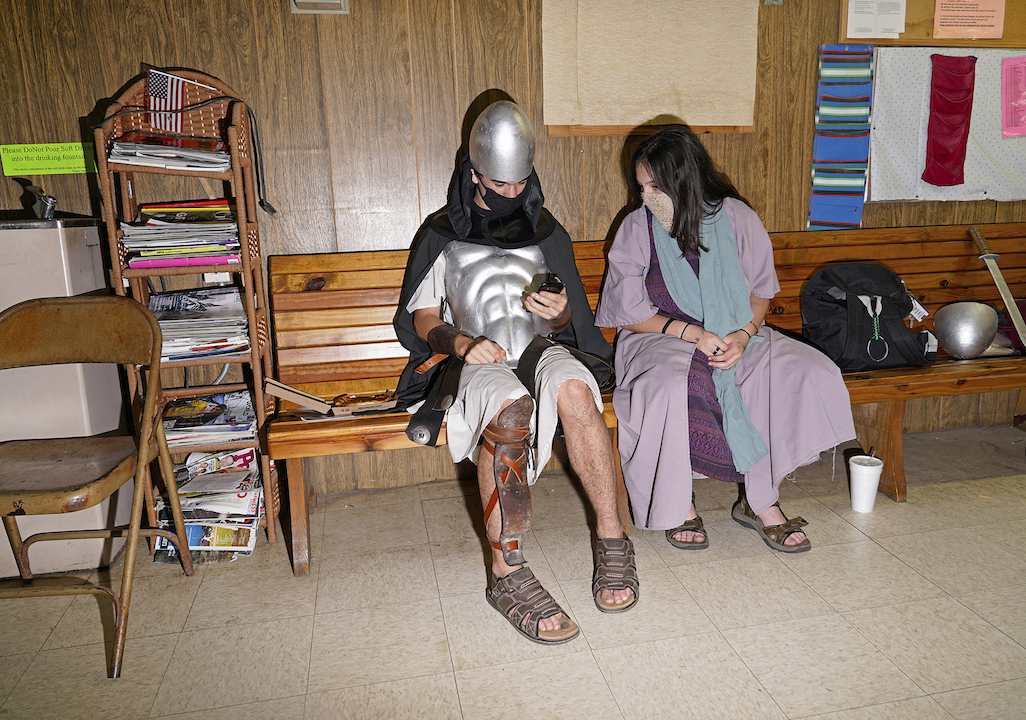 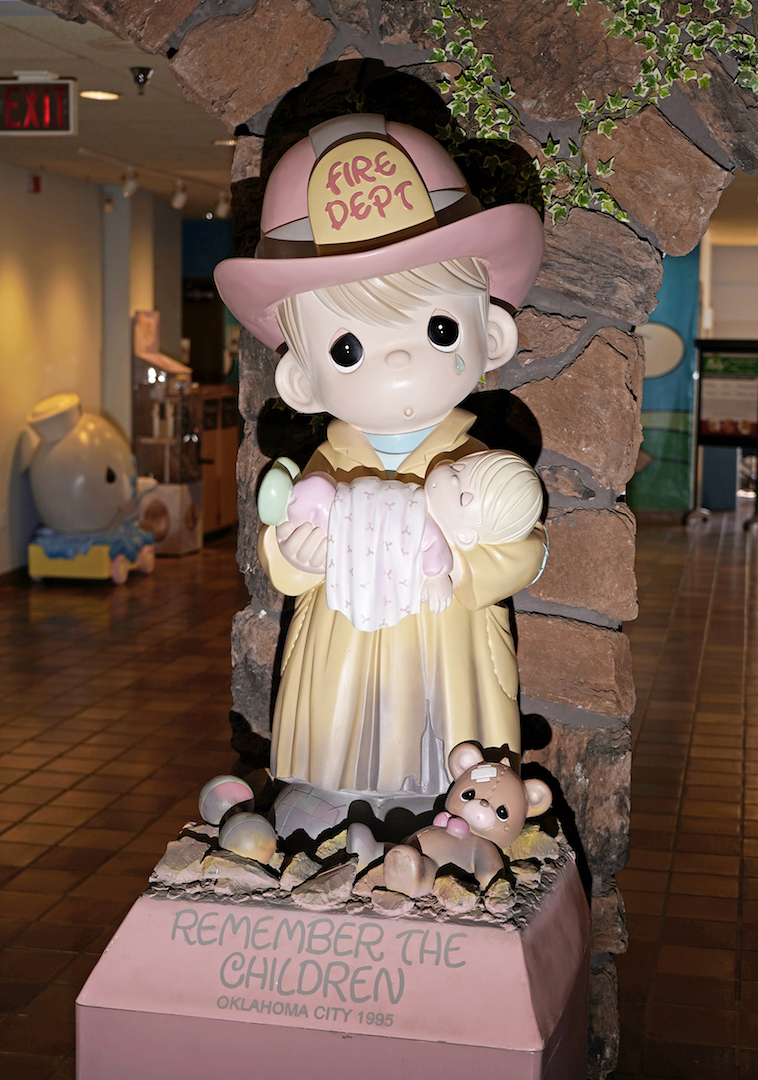 A memorial at the Precious Moments Chapel in Carthage, Missouri 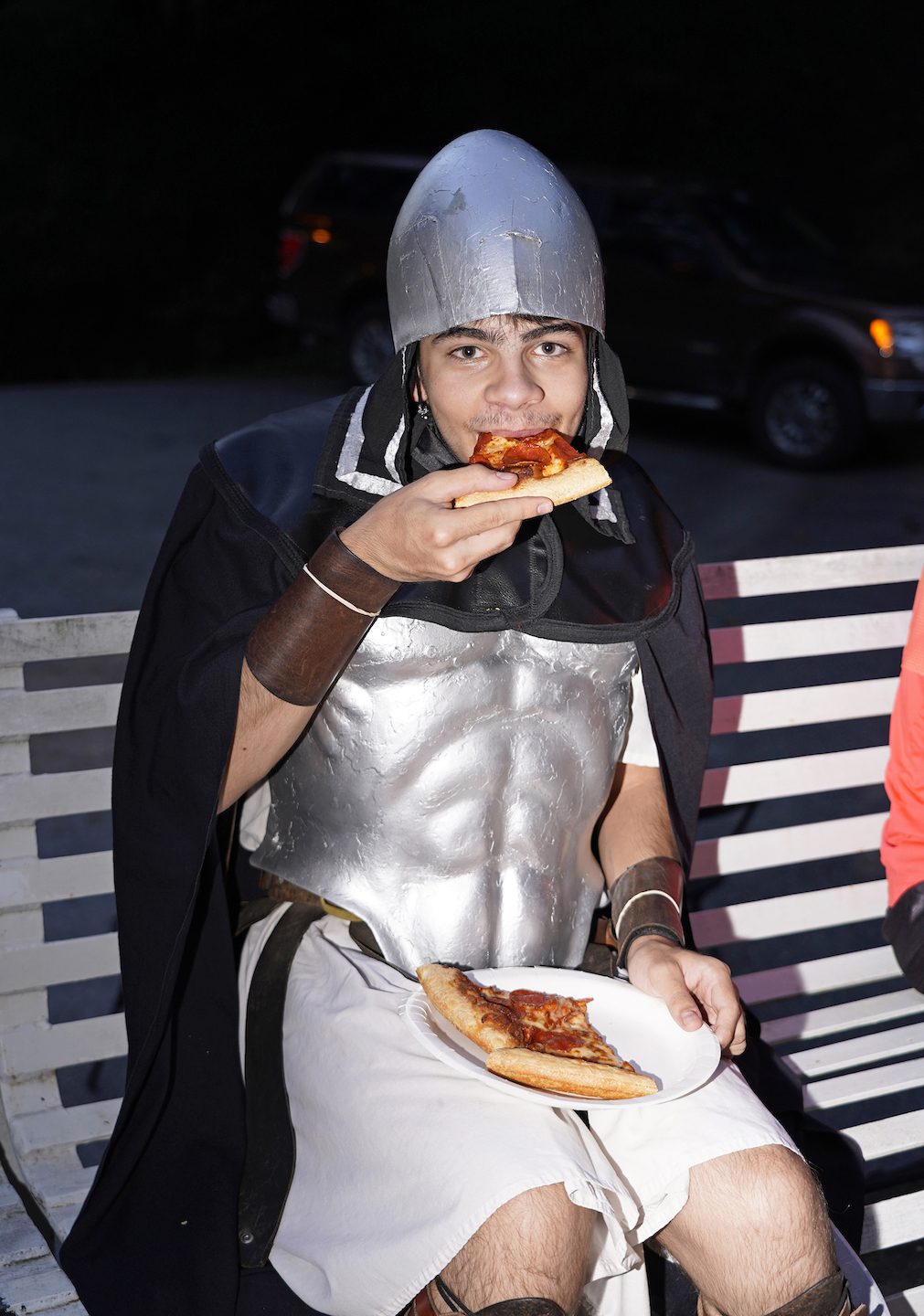 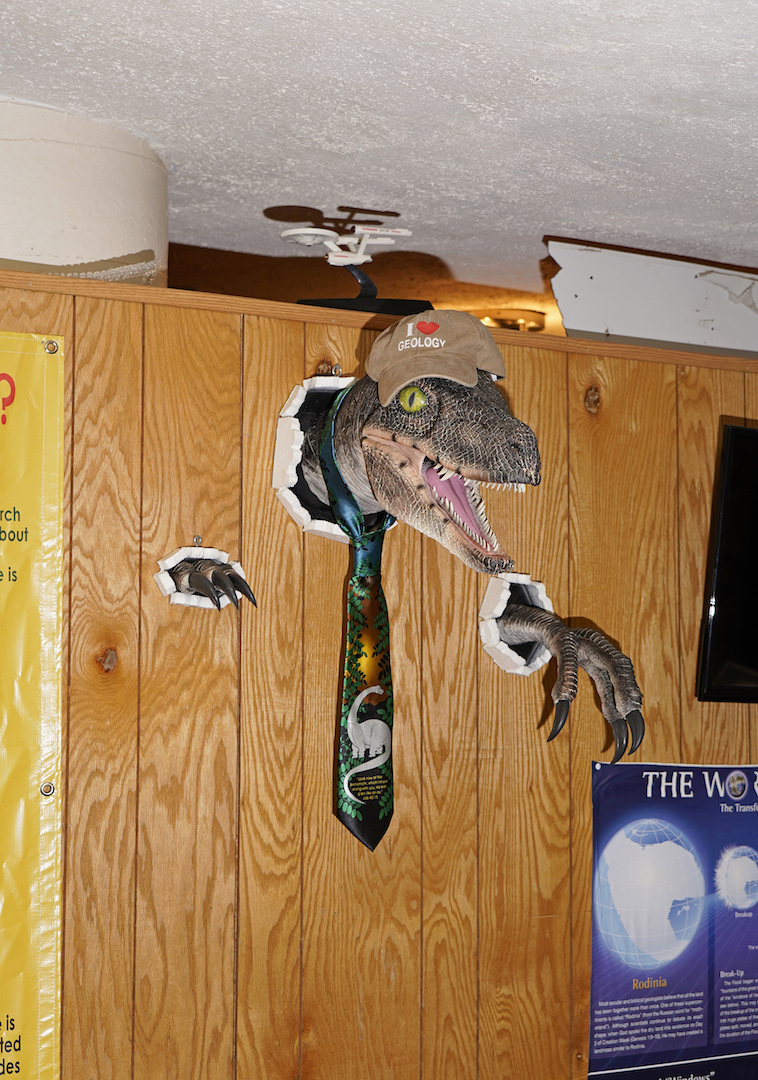 A creationist display in a museum on the grounds of the Great Passion Play, Eureka Springs, Arkansas 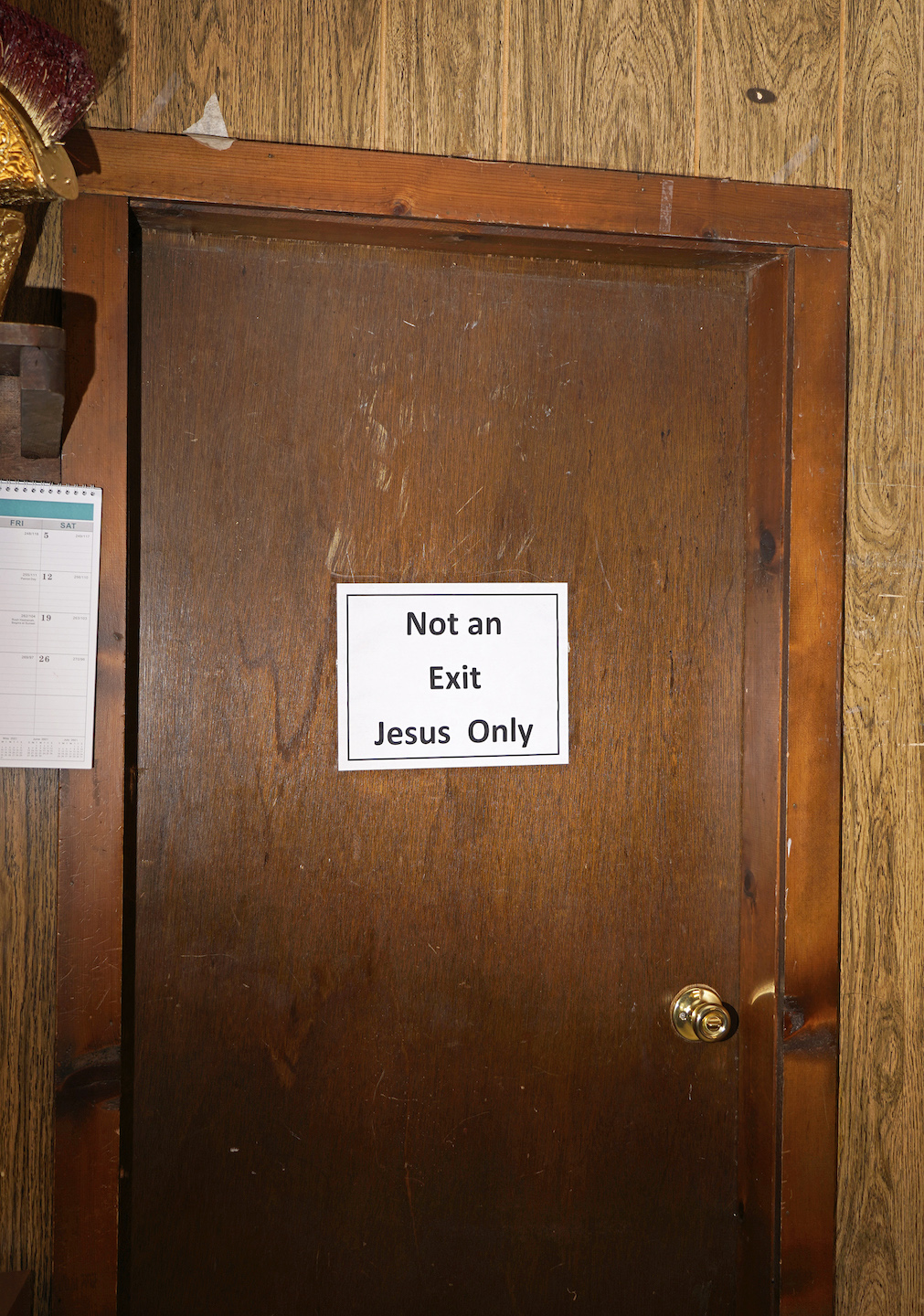 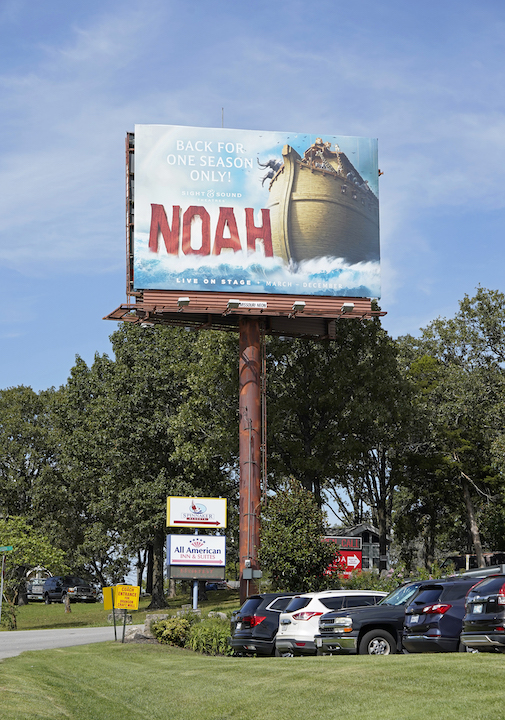 A billboard in Branson, Missouri 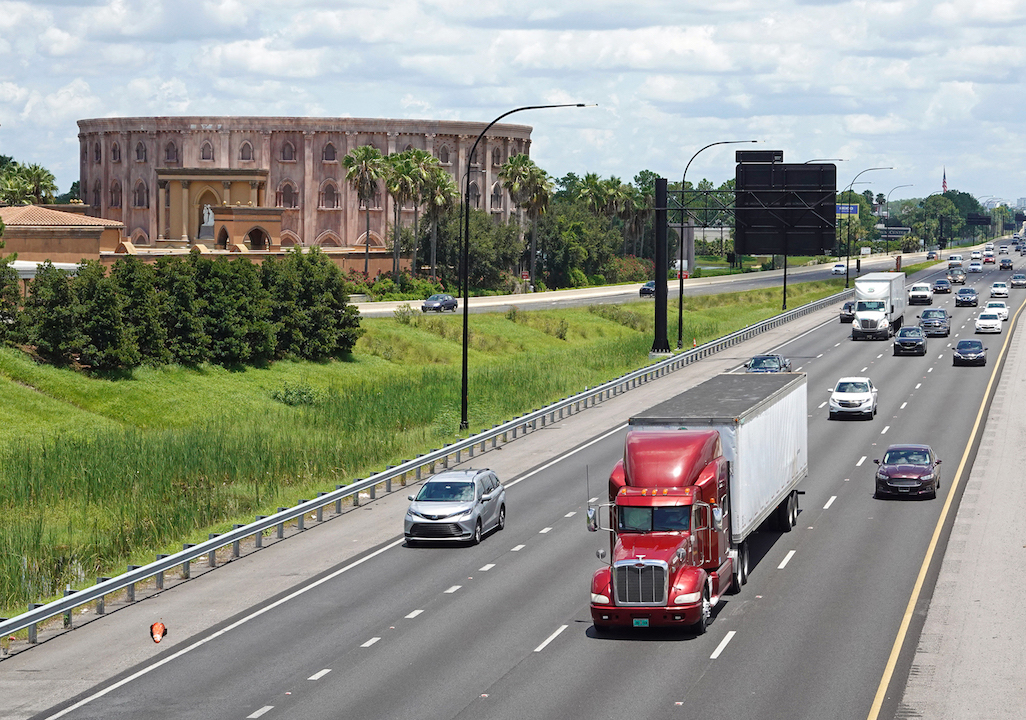 Linkedin
RELATED ARTICLES
OTHER ARTICLES
With their latest capsule collection, SCRT have constructed their own mythology, based on the story of a fictional meteor shower that hit a small Scottish town.
Satirical culture in the UK routinely protects the powerful and punches down. It’s time people stopped laughing along, writes Elia Cugini.
Following the success of her debut novel, the Tottenham native is restating her commitment to the place that made her.
Writers Matt Foot and Morag Livingstone explore how four decades of collusion between the government and the police have slowly eroded our right to protest.
Following the release of his newly republished 1991 book, Redheads, the American photographer reflects on his celebration of ginger people and their magnetic power.
The group’s leader and cofounder Randy Savvy talks nurturing the next generation of riders and keeping Black cowboy culture alive.