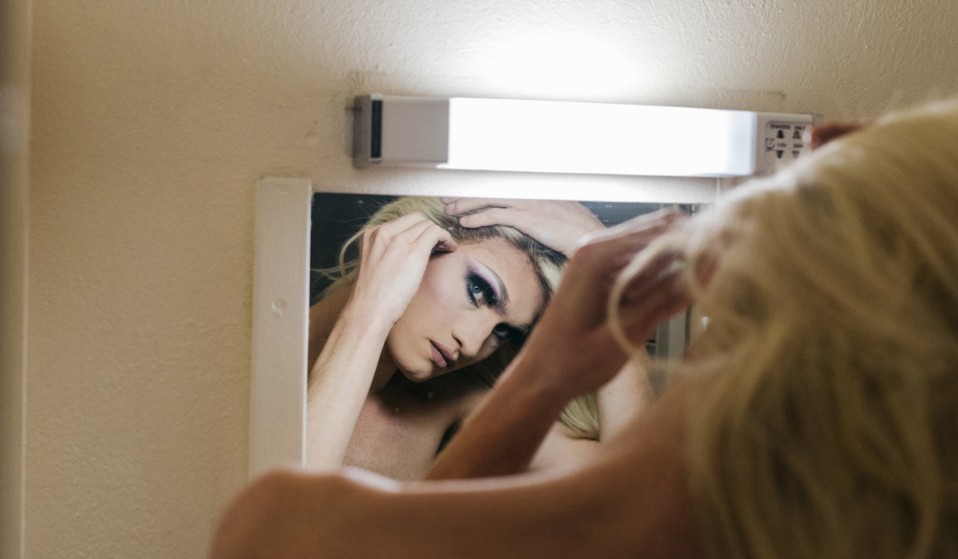 Jacob Mallinson Bird had fallen in love with drag by the time he walked his first season.

But after hearing of gay models being told to carry a skateboard to castings or “butch up a bit” on the runway, he decided to keep Dinah Lux, his alter-ego, a secret.

It was only in Jacob’s second season, following some encouragement from friends, that he decided to let Dinah loose in Paris.

“There’s a photo of me being carried by 40 boys outside the Hotel Printania, where all the models stay,” says the 23-year-old.

“It was the first time these two parts of my life had come together. And while I looked terrible in my cocktail dress and crushed wig, it felt wonderful.” 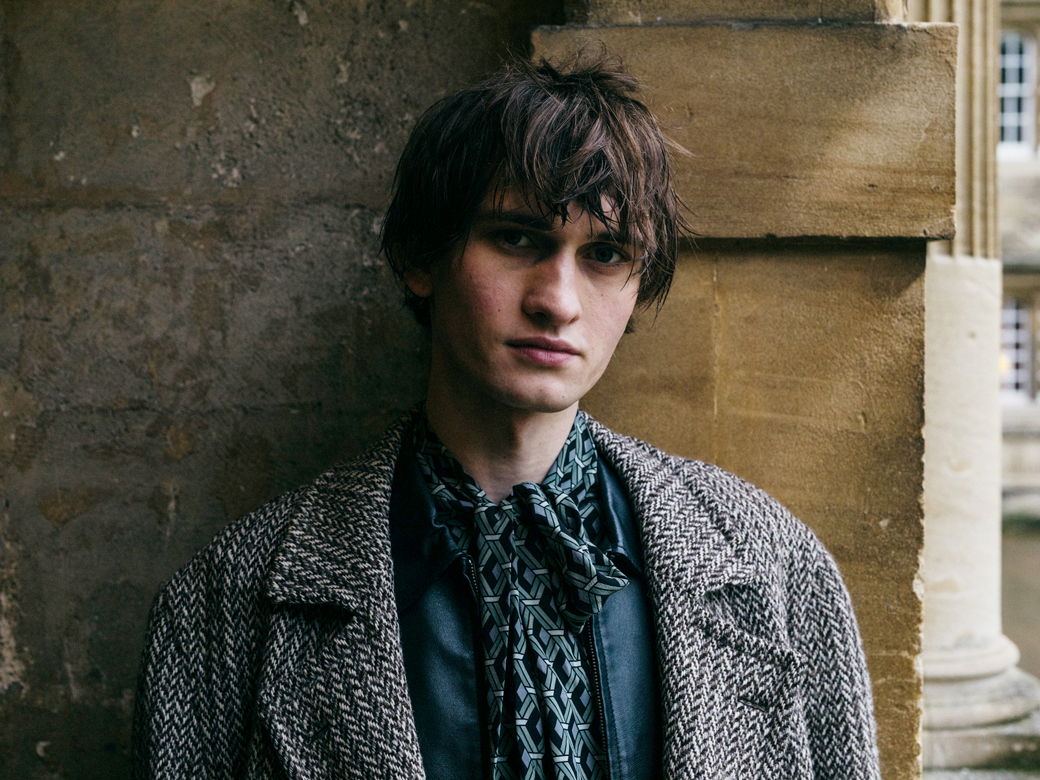 Later that night, as Dinah emerged from a nightclub feeling triumphant, two men lay in wait, ready to attack her.

Paris Fashion Week may have been an easy victory, but being kicked to the ground served as a painful reminder that not everyone is so accepting.

This wasn’t a first for Jacob. As a 19-year-old studying music at Cambridge, he spent a revelatory summer in New York partying with drag queens, transgender people and androgynous club kids.

“My whole notion of what gender was or what it meant to be queer all changed,” he says. “I definitely felt like I had more right, licence and creativity to be whoever I wanted to be. As I embraced that, I began to explore myself a lot more.” 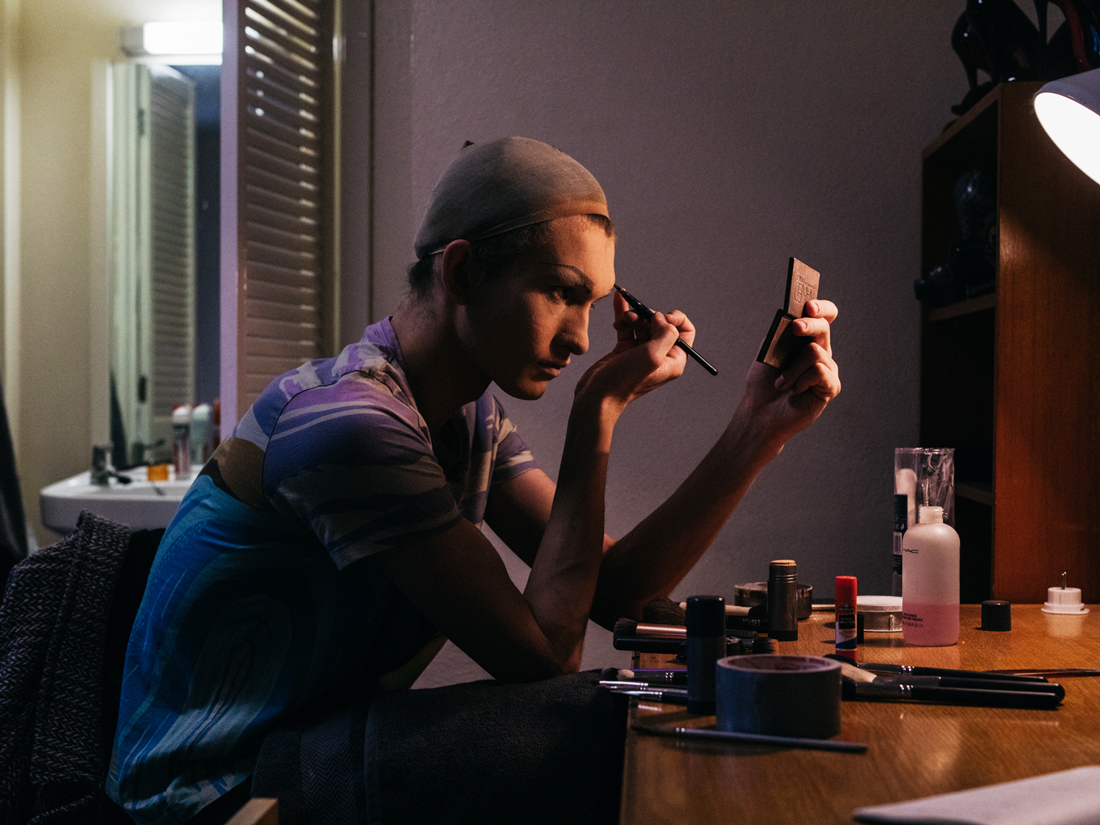 Returning to England, Jacob began wearing fur coats and chandelier necklaces around campus – a stark contrast with the preppy kid from Essex who struggled with confidence at boarding school.

Dinah became an emboldening extension of himself and, eventually, a formal dinner at the university seemed like an opportune moment to wear a dress under his academic robe.

Not wanting it to be perceived as an institutional affront, Jacob cleared it with staff in advance.

With hair slicked back and eyeliner on point, the night felt like a resounding success. The next morning, however, he was summoned to the disciplinarian’s office for “putting a fellow off his food”. 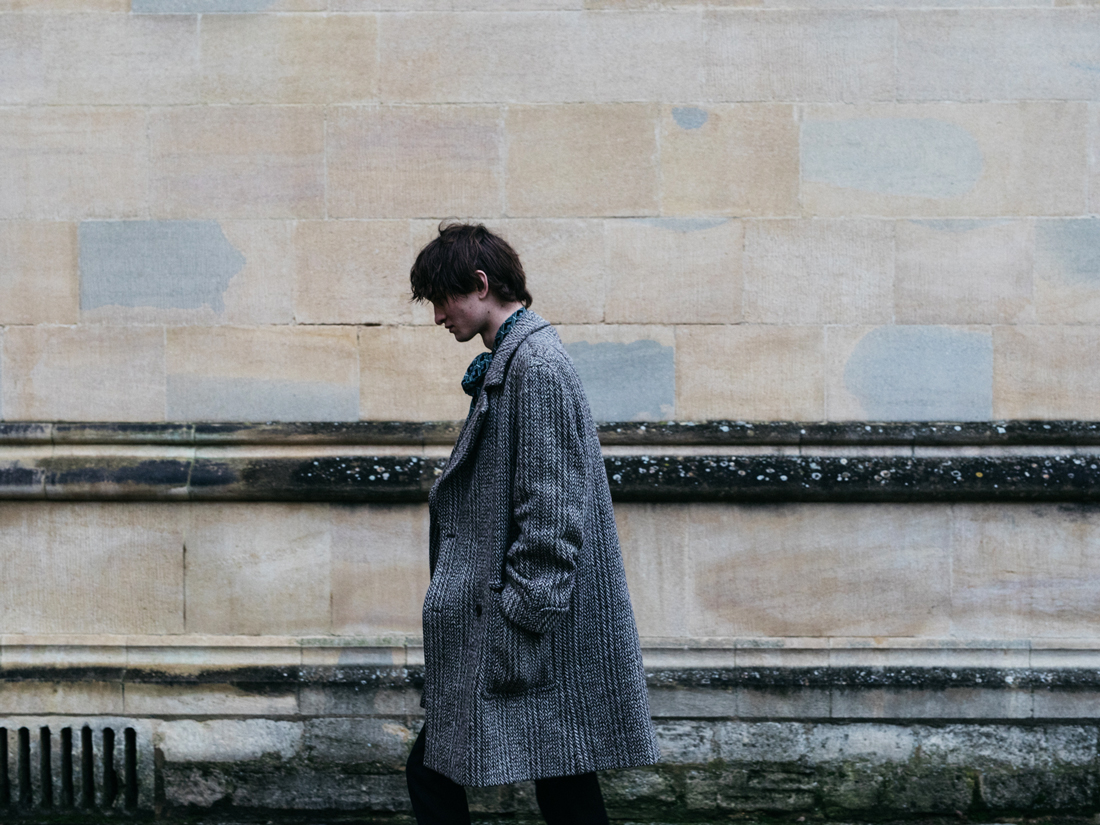 Jacob fought back, forcing the university to acknowledge the absurdity of it all. In the process, he realised that fashion and academia may be more similar than they appear: they are both profoundly heteronormative spaces.

One is steeped in patriarchal history, the other upholds paragons of masculinity and femininity.

In the four years since those incidents in Paris and Cambridge, Jacob has been finding news ways to broaden people’s horizons.

There’s the modelling for the likes of Jean-Paul Gaultier and Raf Simons, the DPhil in music at Oxford (which he hopes to turn into a book), his drag performances, the inspirational talks at schools and universities as well as his journalism on LGBT issues.

Meanwhile, a revolution had been spreading. Trans people are finally being given respect, drag has become mainstream and a new generation is taking terms like ‘gender-queer’ as a given.

Even designers have been gravitating towards a more unisex look, with buff male models phased out by doe-eyed, androgynous boys.

“Fashion is definitely changing – the rigid gender roles that for so long prevailed are finally starting to crack,” says Jacob, speaking from his room at university while packing for a fashion festival in France.

“I was sat in an interview the other day and someone said, ‘Fashion won’t save anyone’s life.’ I disagree. Often the primary way we express our gender, to the world at least, is through clothes… Not being able to do that can be so incredibly imprisoning.”

From the outside, it’s easy to see fashion as a world brimming with egos and aesthetics – a celebration of the superficial. But the industry has an undeniable trickle-down effect. 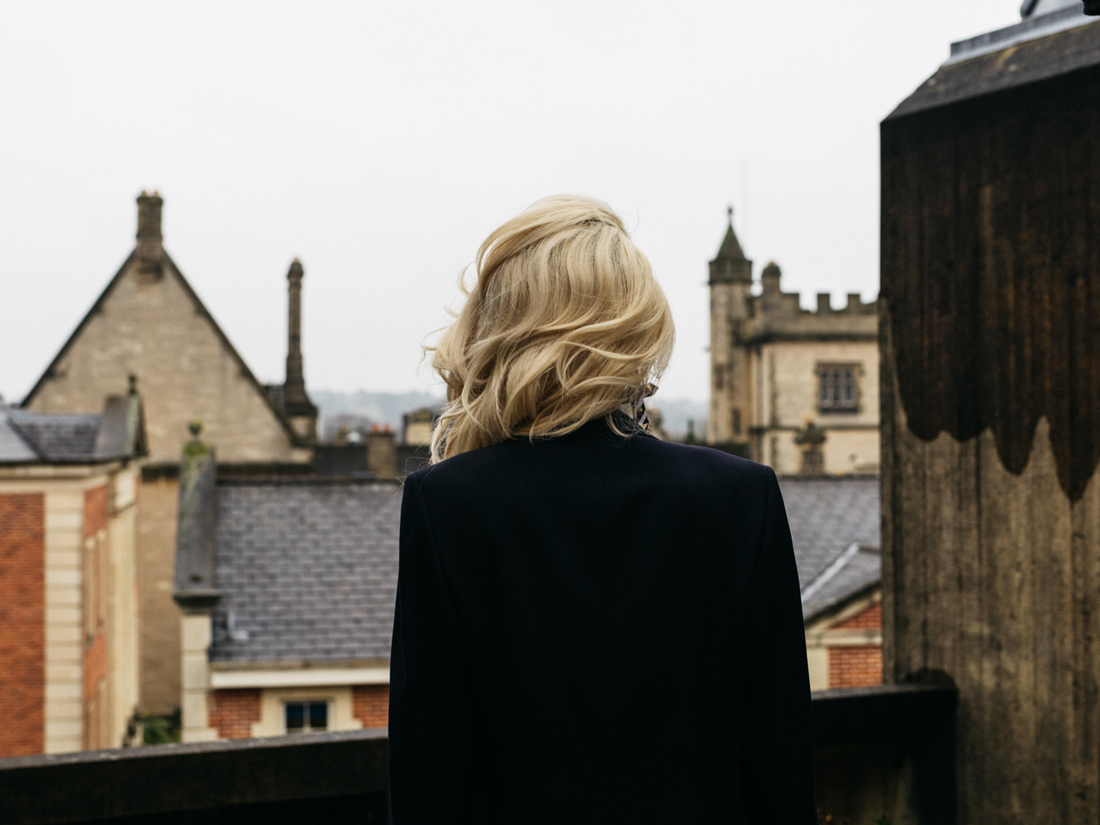 Anyone who has seen The Devil Wears Prada will recall Meryl Streep’s withering speech about how even run-of-the-mill, mainstream clothing items are the result of years of innovation and investment at the highest level.

For Jacob, there’s an upward mobility of influence too – and it’s something we shouldn’t take for granted. One of the simplest and yet most dangerous ways to have an impact, he says, is just by making your identity visible. That’s what makes “pockets of queer utopia”, like club nights, so important.

“Every space, de facto, is a heteronormative space and any queer agency within that disrupts it, so we should strive to be as open and unapologetically ourselves as we can safely do so.

“People will try and hedge you in, assimilate you… but that isn’t quite the same. Assimilation is bowing to the heteronormative, when really there is space for queerness – and we deserve that space.” 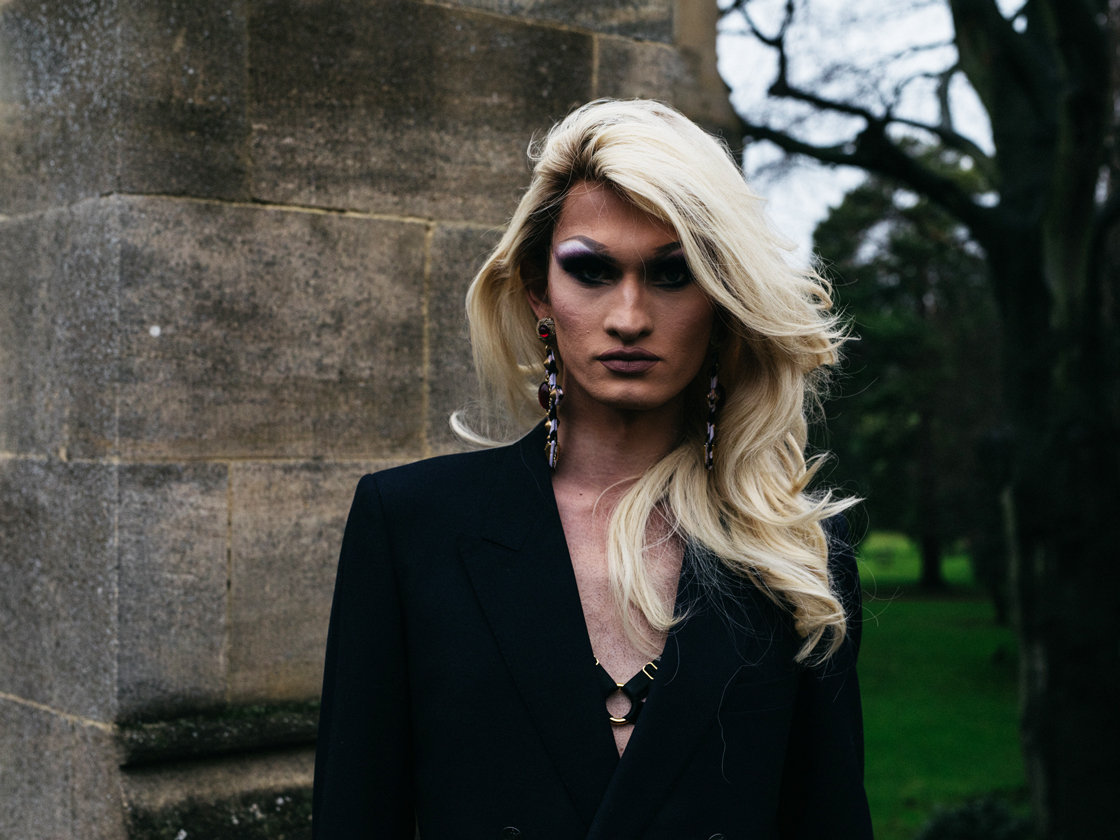 There is still much progress to be made in fashion, he says – less cultural insensitivity, more diversity and a greater sense of responsibility – but it’s headed in the right direction.

Still, given that the industry is driven by trends, doesn’t he worry that this wave of progress he’s been a part of could also pass?

“The industry hasn’t spearheaded this evolution, nor have they issued a call to arms,” he says firmly. “What’s happening with gender is very much of our time. It’s the next frontier on all levels: a big but basic human-rights movement that’s unfolding here and now.”

Linkedin
RELATED ARTICLES
OTHER ARTICLES
Theo McInnes’s photos of the annual event provide an intriguing snapshot of contemporary Britain.
After blocking the Scottish government’s gender recognition reform bill, Westminster is now devising further changes to the law to make it harder for trans people to self-identify.
Following the release of his debut single, Deyaz talks battling addiction, dealing with his struggles through music, and building a budding music career from his living room.
Since 2007, Gideon Mendel has made 20 trips to document floods in 13 countries. The result is an alarming record of what has already been lost to the climate emergency.
AI companies that develop image-generators using copyrighted artwork from the internet are coming under fire from artists who say that it amounts to theft.
A new film from Berghaus traces the story of Adam Raja, who left behind a turbulent upbringing to discover the healing power of climbing.