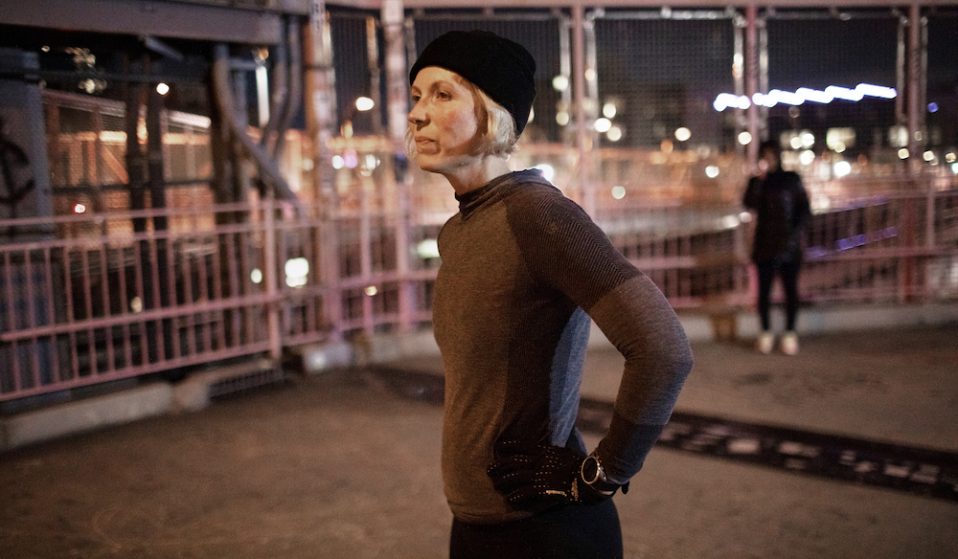 The runner and art therapist tells us why for her creativity and the city are intertwined.

Jesse Zapotechne is one of 200 creative people around the world collaborating with adidas on their [FUTURECRAFT.LOOP] initiative. The runner and art therapist tells us why for her creativity and the city are intertwined.

There is a calmness to Jesse Zapotechne. The runner, art therapist and leader of NYC’s adidas runners project is at the still centre of a city synonymous with relentless dynamics. “When I was fifteen had become very introspective, very closed,” she tells me after a pre-dawn kettlebell class down in Little Italy. “Art as a way of communicating without words helped open me up. Running helped me realise that art and physicality can be intertwined and therapeutic in their own right.”

Jesse was one of the pioneers of the culture of urban running – and through her involvement in the adidas FUTURECRAFT.LOOP project, she is helping to embed the aesthetic of circularity through the intensely popular and ever-growing community of New York runners. From the gym in Lower Manhattan, it’s a quick bike ride over to the immaculately cool space that is Brooklyn’s Public Records. As the sweat evaporates we sit and talk about how the culture she helped create is leading the charge for a more sustainable sporting future.

How did your running life emerge?

I discovered I had a talent for sprinting when I was a kid and I joined the track team. But it was always a solo thing for me. When I moved to New York I landed a bartending gig. I was running in the morning, studying in the day, working till 2AM, then going to a bar, then pushing on to a club. And I would see this one guy a lot – he said he’d started this running group and that I should come.

I was skeptical, I had never run in a group before. We met at a little track down in Chinatown down by the Manhattan Bridge and we ran a loop over the Manhattan Bridge and back over the Brooklyn Bridge. I had never even been on the bridges at that point. The vantage point, particularly at night, was stunning. I’m there in the cityscape just with my own two feet. I’d taken myself to this beautiful place, I could see where I was going and I could see where I had been. It was the coolest thing that I had ever done. 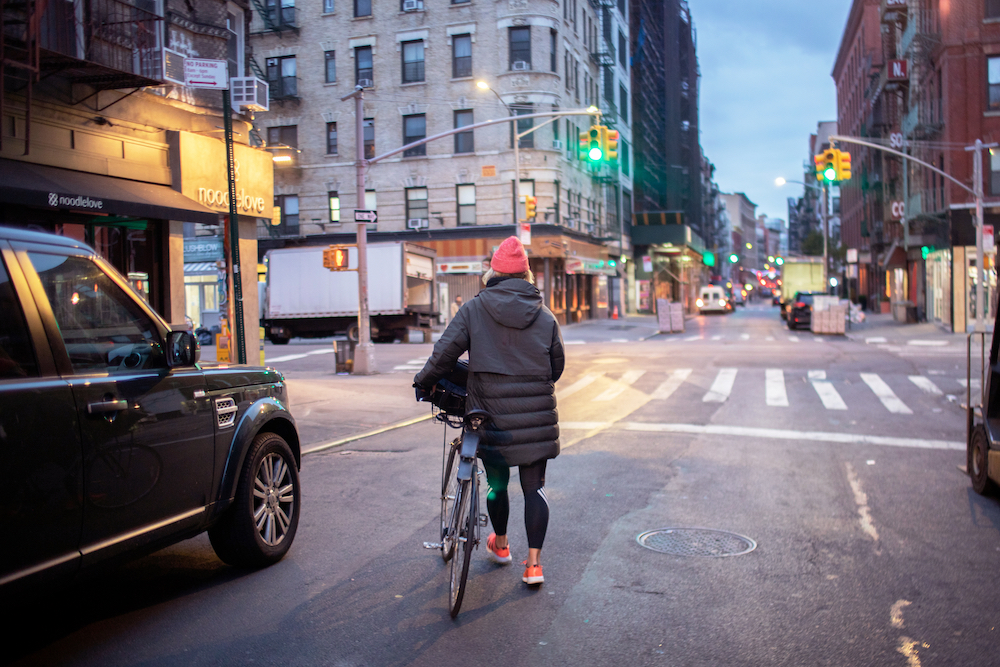 Was that simply to do with the Manhattan skyline?

Partly – but there’s a topographic awareness that happens when you run distance through any city, a sense of the physicality of space that is truly special. You’re tapping into the energy of the place. You’ll notice that the feeling of the streets is different from moment to moment. One day everything seems to be in chaos, and another time everything is flowing. And the rhythms of the day itself change too. Through running, you begin to be intuitive with that. Add the sights, the smells, the sounds, the people – you quickly realise that running not only creates a deep engagement with a sense of place, but it also creates a deep engagement with one’s self. 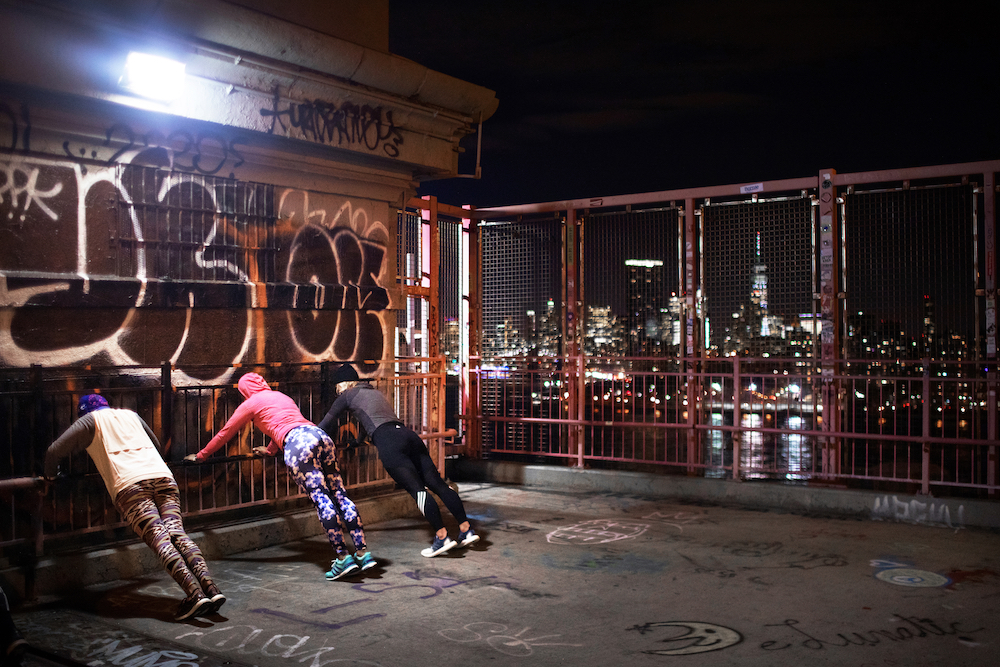 You helped to create a culture in urban running too, right?

Well, yes, with The Breakfast Club and The Bridge Runners I think we inspired a lot of groups that have created this culture around us. There’s a thing with running that strips away the bullshit. There’s nowhere to hide. We talk about the parallels between the running scene here in New York and skateboarding culture. That’s a lot to do with the fact that you really do spend a lot of time in the streets, and even after runs you spend a lot of time with one another.

Running influences my art, I bring my therapist sensibility to the way that I coach, and I always think about group dynamics, which are very important for creating a healthy community. My creative life and my running life are now weaved together. Giving someone the skills through art therapy to be creative is very healthy, and so is facilitating the ability to run through the city. The creativity and the therapeutic side of running is underpinned by a sense of community too. The kind of stimulation the brain gets when running gives you great ideas and stimulates dynamic conversations. You come back from the run, have a cup of coffee together and ideas are emerging all the time.

And in the process, running must build a deep engagement and care for the wider environment, too…

Exactly. And while running can be an act of rebellion, it can also be an act of self-care. And if you care about yourself and your community, it’s a natural extension to care about the world around you. People gravitate toward the sustainability challenges we have set within the adidas running community. There is a sense of urgency right now. We’re going in a really bad direction, especially with plastic and with trash and material waste.

The fact that a big corporation like adidas are taking dynamic steps through the FUTURECRAFT.LOOP project toward facilitating this sort of dynamic engagement with the city and moving toward circularity in their products is huge. But the problem is that the more I know, the harder life becomes. Awareness is the first step, really, and by raising awareness and physically taking steps with this project toward circularity, is so important. Once you’ve seen, you can’t get your old eyes back. 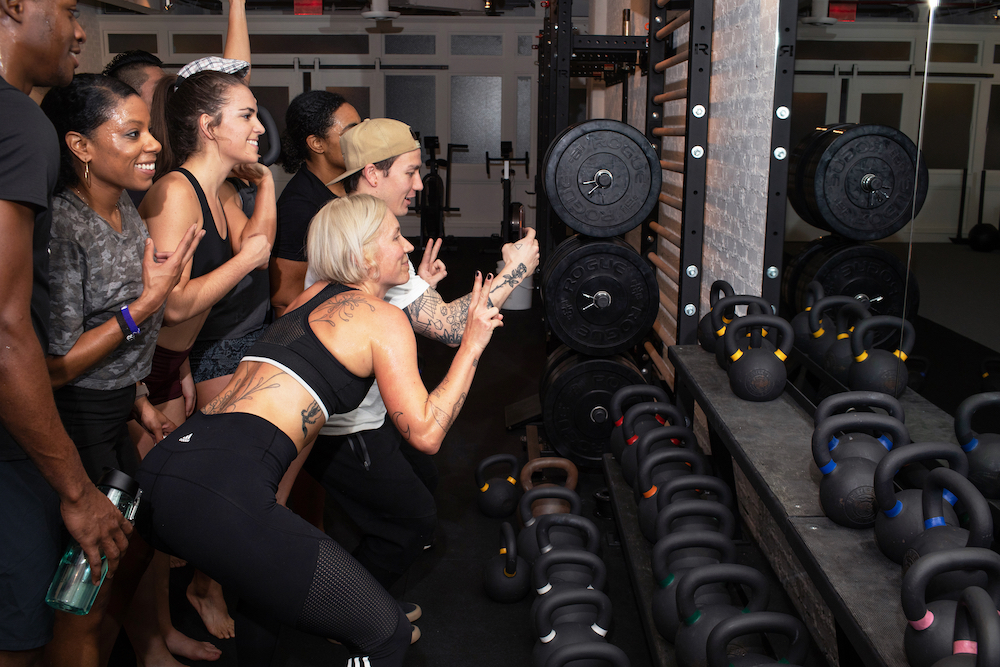 How is the New York running community reacting to these ideas?

Everyone is aware that we need to change and that we have our own kind of responsibility. The moment I walked into the gym today everyone wanted to know about the shoe. They wanted to know how the project works and how it can bring positive change. They realise “oh shit we’re fucked…but what can I do?” That’s the big question, I think. As runners, we need the products. I’m hyper-aware of what I am consuming and that I am in a position to facilitate other people’s consumption, so it’s always been super-important to me to not lead people astray, not give people misinformation, not try to push a shoe on someone when that shoe is no good for them. I respect that there is a desire to create circularity and at the same time I’m skeptical.

I need three different types of shoe because I am training in three different ways for one sport. Am I supposed to have one shoe that fulfils all these things? Does this then evolve into a subscription type service for this one shoe, or do I still have three different types of shoe all made from this material? How do we keep improving the functionality of these shoes whilst sticking to a sustainable model that moves towards a circular way of producing these things? These are important questions that we are asking, and this dialogue is an exciting space in which to find ourselves.

Reddit
RELATED ARTICLES
OTHER ARTICLES
As shipments get cancelled and factories shut down, the global pandemic has caused chaos for millions of garment workers across the Global South.
In his new project, Doug’s Gym, photographer Norm Diamond pays tribute to a disappearing world.
Photographer Liz Johnson Artur – a self-described ‘product of migration’ – has been capturing the African diaspora since 1986.
After moving with his parents from war-torn Poland to Leicestershire, Czesław Siegieda used photography to document the day-to-day of immigrant life.
The 25-year-old photographer has come a long way in a few short years. Now, she’s doing everything she can to tell stories that matter.
Having started as a DIY rebellion, the fanzine movement is now an invaluable subculture under threat from an increasingly digital world.