Art & Culture / Joe Sib is finding humour between the cracks 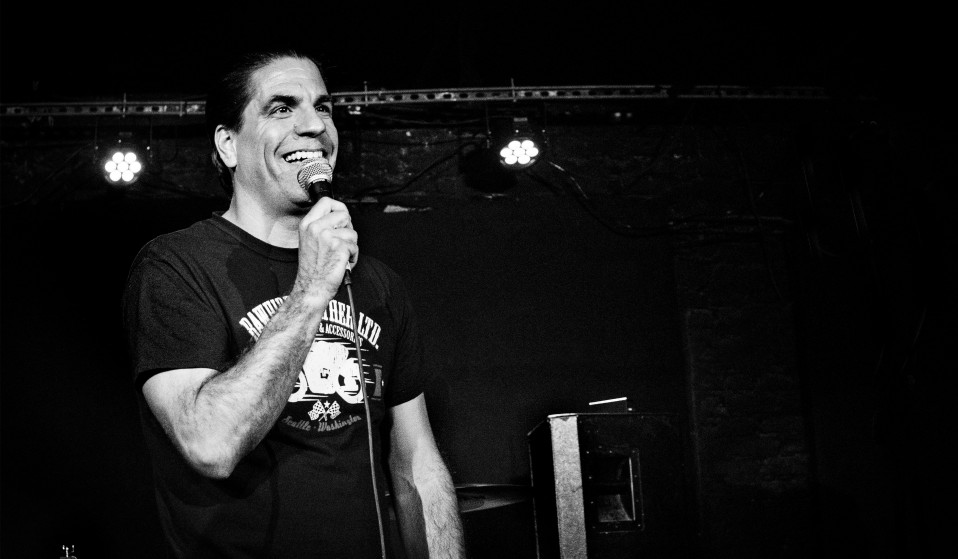 Poking fun at indie culture and meeting heroes along the way. Joe Sib has found the funny side of punk.

Poking fun at indie culture and meeting heroes along the way. Joe Sib has found the funny side of punk.

Ever noticed how all the art shows, skate edits and new records can feel pretty serious? Is anyone finding the humour between the cracks? Joe Sib, luckily, knows how to cut up.

Sib (Joseph Subbiando until his punk friends chopped it down) was an impressionable teen when California hardcore rose up in the ’80s – a tireless Santa Cruz zealot who would slam at six-band shows, from the first note of the unknown opener to the last encore.

“There was the Ramones, the Sex Pistols, The Clash and that whole generation. But what really spoke to me as a kid were bands like 7 Seconds and Minor Threat,” marvels Sib. “And as a singer, Kevin Seconds [Kevin Marvelli, 7 Seconds frontman] was by far the biggest influence. They were always pushing the envelope and reinventing themselves when other bands weren’t doing that. I feel so lucky I was able to be at those shows as a kid and work with him later.”

In a scene that encouraged everyone in the room to participate, Sib took it a step further, starting his own bands. He went on to tour as the frontman for Wax (with a 1995 video by Spike Jonze) and later 22 Jacks. But Sib’s living legacy is LA’s SideOneDummy Records, founded with friend Bill Armstrong. Over twenty years, they’ve released albums from Flogging Molly, Title Fight, Gogol Bordello, Andrew Jackson Jihad and Jeff Rosenstock and 7 Seconds – bringing the circle of influence full circle.

“I wouldn’t be where I am without punk rock and experiencing that whole ride. It’s funny because I know so much about the Ramones, or the Damned, or the Adolescents, but I wish I could trade some of it in for world history,” laughs Sib. “I need the amount of information a normal forty-seven-year-old man should know. But maybe if you met a doctor, he would wish he knew stuff about music. He just knows about blood vessels and brains.”

Sib was never the type to sit back quietly. He hosted radio shows and eventually launched SideOneDummy Storytellers, a monthly spoken-word event in LA. The idea of one person telling stories had intrigued him since he was a kid. “My comedic muscle was messed around with in our house. I would be saying something outrageous and my dad would say, ‘Tell that story again.’  My mom would say, ‘Do that imitation of your Uncle Blaise.’ Comedy was my go-to thing, to break the ice in a situation I felt uncomfortable in. I definitely leaned on humour – even when meeting my wife.”

In his early twenties, Sib went to an open mic night in LA. But it wasn’t until after SideOneDummy was sustaining itself that he revisited the idea. “I wanted to get back on stage. And not because the world is waiting for a man in his mid-forties to get on stage and tell stories, but honestly just to have that high of, ‘Hey man, I have a show tonight!’ Getting on an airplane to go be funny, getting my fifteen minutes, that puts a little skip in my step.”

Sib’s comedic delivery is reminiscent of his frontman presence – physical and animated. He leans on his punk knowledge for material; in his one-man show, California Calling, he speaks over photos on a screen. Sib’s friend, Pete Stahl, who sang for influential DC band Scream, suggested Sib send a clip to Ian MacKaye of a section where he talks over a shot of Minor Threat. “Ian’s screaming into the microphone with everyone dog-piled around him, and all the sweat and energy. [I talk about] how there was no back-up plan. That’s what I loved. There’s no question of, ‘Hey, what college are you going to? Are you going to get into a fraternity?’” recalls Sib. “No, it’s, ‘This is what we’re doing. This is the plan.’ Ian wasn’t thinking he would fall back on his scholarship to Stanford.”

MacKaye wrote back to Sib and said it made him laugh. There really was no back-up plan.

“I still have the email from Ian. I’m a fucking grown man! Sometimes I go and I look at the email. How stupid is that? I treat the email like it’s a piece of art! It’s not hand-signed by Ian MacKaye! I break out this digital thing – but I know it’s from him and it’s so rad.”

Sib already had a bit of history with Henry Rollins from when they used to host back-to-back radio shows. Sib sent Rollins a few clips, too. “I got back this email from Henry, one line: ‘This is good. Keep doing it,’” relays Sib with his lips pursed in classic Rollins form and then busts out laughing. “It’s like if I was a crazy religious person going door-to-door spreading gospel and Jesus himself came down and said, ‘Hey man, you’re doing a great job. Keep it up.’”

But things didn’t truly come together for Sib until he was in NYC for a comedy fest and popped in to see SideOneDummy post-hardcore band Restorations, who were in town for a show. The opening band had to return to Australia early, leaving a hole in the line-up. Restorations’ Jon Loudon suggested Sib fill the slot. “The first thing that went through my mind was, ‘Dude? Stand-up before a band? No one wants to hear that.’ I said yes, but as it got closer I tried to get out of it. Then our publicist told me if I backed out she would be so bummed and the band would be bummed. She told me, ‘That’s just not you.’ So I was thinking, maybe when I went on, there won’t be anyone there. But of course, it was sold out, packed.”

Just before he went on, the agent asked if he was excited. Sib said: “No.”

“I told him I was either going to get up there and do two minutes, or I’ll do fucking thirty-five. No in between. Either I was going to feel it or not,” he says. “I went up there and it was one of the best sets I’ve ever had. The crowd was on the journey from beginning to end. If you do a good job, the person who doesn’t know who Bad Religion is should still be able to get a kick out of it.”

Sib says he feels restless these days when he doesn’t have a dozen things going on. Later this year he’ll record a live show at The Fest in Gainesville. Keeping busy and on the go has been a life-long education. “I went to college, but the real schooling was going out on the road in a van and touring. Even when there wasn’t anybody at the shows. The stories I remember were the van breaking down and getting stuck in El Paso for two weeks, being in the middle of nowhere with your friends, going, ‘How do we get home? We have no money.’[…] Now, if my kid wanted to go on tour, I’d be like, ‘Here, wear this helmet! Carry your phone in your pocket so I can track you!’

“But that’s the thing about comedy,” adds Sib. “The more life you live, the more bits you get.”

Linkedin
RELATED ARTICLES
OTHER ARTICLES
This afternoon, workers of the hospitality chain came together to call for better pay and working conditions.
Proponents of personality tests argue that they’re necessary to find the best person for the job – but in practise, they’re often discriminatory.
Alternating between colour and black-and-white, the photographer chronicled sexual liberation, economic crises and the repercussions of the war in Vietnam.
As the cost of living crisis bites, letting go of treats to keep us going is proving difficult – but we should’t just blame ourselves for our financial worries.
We sat down with trans comic Jordan Gray to discuss the power of portraying complex characters, giving humanity the benefit of the doubt and getting naked on live TV.
The demonstration took place this week over plans to slash £50m from arts bodies in London.