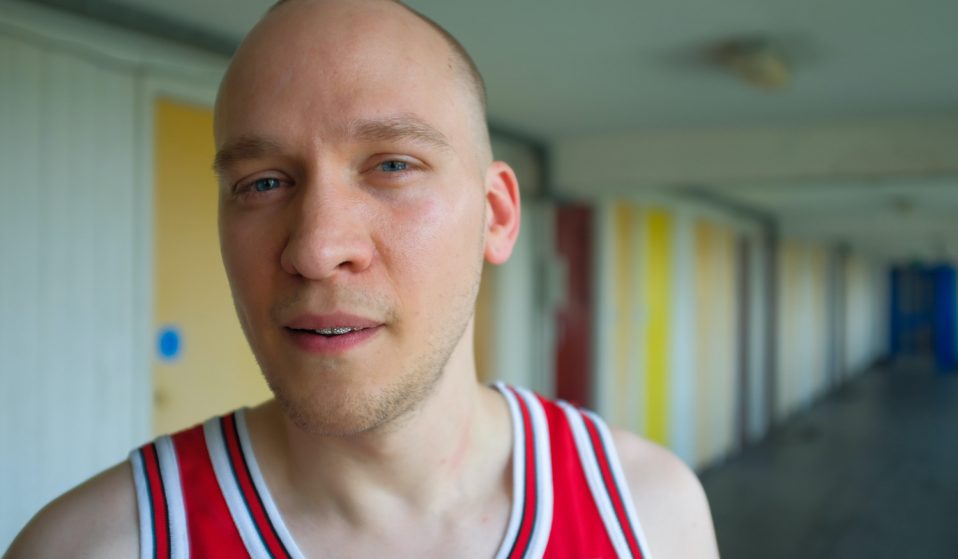 In the latest episode of Joining the Dots we sit down with author Gabriel Krauze, whose autobiographical debut novel Who They Was is longlisted for the Booker Prize.

In the latest episode of Joining the Dots we sit down with author Gabriel Krauze, whose autobiographical debut novel Who They Was is longlisted for the Booker Prize.

A dog day in August on the South Kilburn estate. I roll past the police tape to meet writer Gabriel Krauze, whose debut novel Who They Was has just recently been longlisted for the prestigious Booker Prize.

Krauze is dressed in a Chicago Bulls vest, stonewash jeans, and crisp high tops. His head is shaved tight. The words ‘Who They Was’ is freshly tattooed on his right fist and OUTLAW, more faded appears on his left forearm.

He doesn’t look like your typical Booker nominee and his book is unlike anything you’re likely to have read. Who They Was is a fictionalised chronicle of a period in the writer’s life in his native Kilburn while he balanced studying for an English Literature degree with a life making moves in the ends.

It’s a narrative vividly rendered – propelled by a ferocious literary energy – in the vernacular of the courtyards and balconies of London’s hidden peripheries. Gabriel leads me to Uncle T’s yard, home of a man who exists in both Krauze’s real and fictional worlds. Once there, Gabriel sits on a cream leather sofa beneath a framed print of Martin Luther King Jr., pours me a glass of cool water, and we roll the tape.

On the world of Who They Was

“The book itself is an immortalisation of a time and place, not just in my life, but a world and a time that a lot of other people experience. One of the biggest things that is never touched upon is what is it that draws people towards this world? There is a lot of circumstantial shit, like if you grow up and your parents are crackheads and they neglect you, and you grow up surrounded by violence, then you are likely to be in that situation. But there is a whole other group of young men who, like myself, don’t come from some mad fucked up background. We didn’t grow up with crazy disadvantages and everything stacked against us. But we had an instinct within us that was like fuck the law, fuck conforming, fuck what society thinks of us, I am doing me, and I am following my instincts.”

On confrontation and reality

“The book is confrontational because it is confronting people with reality. I’m sure somebody might criticise me and say that it is glamourising violence, but it is not glamourising that [criminal] world at all. It is portraying that world in terms of how difficult it is, how traumatic it is, how damaging it is, not just for the people in that world, but for people on the periphery of that world.”

On worlds within worlds

“There is a chapter in the book where I write about one guy I know from South Kilburn who got killed at a rave. He got shot in the head. The day after that happened  I went to Uni and not one person there is coming into my tutorial like, ‘did you hear about my man that got shot in the head?’. But those are normal conversations in the context of my friends… there are these worlds within one city, and they are literally worlds, different realities. Some people can maneuver between them, some people can step out of them, some people stay confined to their world always.”

On meeting with literary agents

[on speaking with a potential agent] “She said, ‘so how much of it is true?’, and I said ‘all of it’, and as soon as I said that, she started backing out. She was like, ‘what happens if you get arrested for it?’, and I said ‘I am not going to get arrested, because I know that the way I have written it is protecting people and myself.’ But she was still like ‘what happens if you go to prison?’, and I jokingly said, ‘it’s alright, I will just write another book when I am in prison!’”

On race and crime

“It is important to recognise that white boys are just as involved in this shit as anyone else. In my book, there are a lot of Afro-Caribbean characters because those are my friends, my family, my brothers, my sisters, the people I grew up with… But the narrative in the media that has always been portrayed, and in particular, the thing which I hate, as black-on-black crime. It is a myth, it’s just a racist, bigoted, demonisation, and it has created a false narrative which people buy into.”

Listen to Joining the Dots on acast, Spotify, Apple Podcasts, or wherever you get your podcasts, and be sure to subscribe to get each new episode delivered straight to your feed.

Who They Was is available now from Fourth Estate.

Linkedin
RELATED ARTICLES
OTHER ARTICLES
The revered showbiz chronicler recalls his journalistic beginnings, documenting subcultural scraps in the ’80s.
A group of Ukrainians living in Poland are helping Ukraine withstand Russia’s brutal invasion by buying supplies and shipping them directly to the war’s frontlines.
Following the success of her debut novel, the Tottenham native is restating her commitment to the place that made her.
Over the weekend, London locals came together to resist a pre-planned police raid targeting delivery drivers.
Our new magazine is here, starring the inimitable Mitski. Order your copy now and join us on a trip around the world.
The author discusses her blistering new novel about history, revolution and queer love.