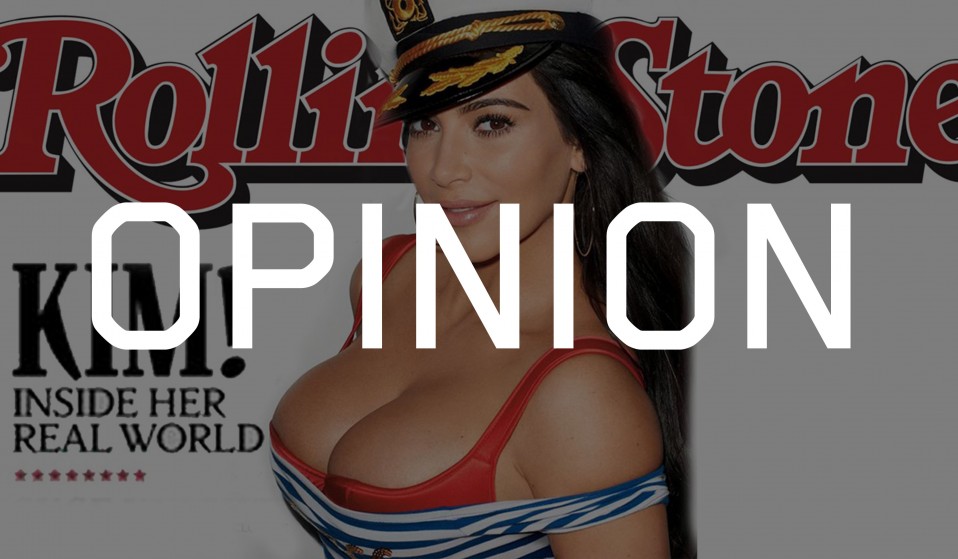 Kim Kardashian's Rolling Stone cover pushed Sinead O'Connor to declare the death of music - at least the third time that music has “died” in recent years. But is it time to stop shouting about pop culture on life support - and stop being sexist and awful to Kim, too?

Kim Kardashian's Rolling Stone cover pushed Sinead O'Connor to declare the death of music - at least the third time that music has “died” in recent years. But is it time to stop shouting about pop culture on life support - and stop being sexist and awful to Kim, too?

“What is this cunt… doing on the cover of Rolling Stone?” asked Sinead O’Connor, presumably rhetorically, on her Facebook page yesterday. She continued: “Music has officially died. Who knew it would be Rolling Stone that murdered it? Simon Cowell and Louis Walsh can no longer be expected to take all the blame. Bob Dylan must be fucking horrified.”

Pronouncing the death of music has grown so old that the pronouncement must be nearly dead itself. Only last year – between his nonsensical and damaging remarks on mental health and addiction – we had to listen to Gene Simmons eulogising rock music.

His remarks weren’t far behind those of that priceless ass Noel Gallagher who told the world that all music now is “either a shit rap about somebody’s struggle, or just fucking shit music set to some reggae backbeat sung in some transatlantic fucking accent.” Not exactly a hip-hop critic, it was Gallagher whose thinly veiled racism stoked the flames of ignorance in advance of Jay-Z’s Glastonbury headline slot, something we’re still not recovering from all that well.

Sinead O’Connor is, of course, a very different type of commentator. Unlike Simmons and Gallagher – both of whom, through their lyrics and comments in the past, have plumbed the depths of nonsensical horseshit – O’Connor has always been controversial in a more entertaining, pointed way. She famously tore up an image of the Pope on Saturday Night Live at the end of an a capella performance of Bob Marley’s ‘War’ in protest of the sexual abuse so rife in the Catholic Church and the pontiff’s desire to whitewash it.

She warred with Prince in the wake of covering ‘Nothing Compares 2 U’: “He summoned me to his house – and it’s foolish to do this to an Irish woman – he said he didn’t like me saying bad words in interviews. So I told him to fuck off.” It was a break with the orthodox view that Prince’s genius should make us turn our heads to his often-sanctimonious prudishness since Finding God. Refreshing, in many ways.

O’Connor is an iconoclastic feminist and a Catholic priest, a woman who came out as “a dyke” before marrying her fourth husband. As Teo Bugbee’s recent article in The Daily Beast has it, “More than anything, Sinead O’Connor is enthusiastically herself. A full human being, complete with irrational oppositions; a house divided against herself and still standing.”

She’s also been through her share of mental health issues and struggled with a nasty and vitriolic media that’s sought to vilify her. In short, to take O’Connor to task personally for her comments on the death of music is to ignore both her often brilliant scattergun approach to attacking public figures, her unique, renegade stance on a number of issues, and the struggles that she’s contended with to get to this point.

But when O’Connor made her comments the other day, she was tapping into a well of anti-pop culture sentiment, the depth and volume of which can be found first in the sexist (and semi-literate) responses to her thoughts on Facebook. 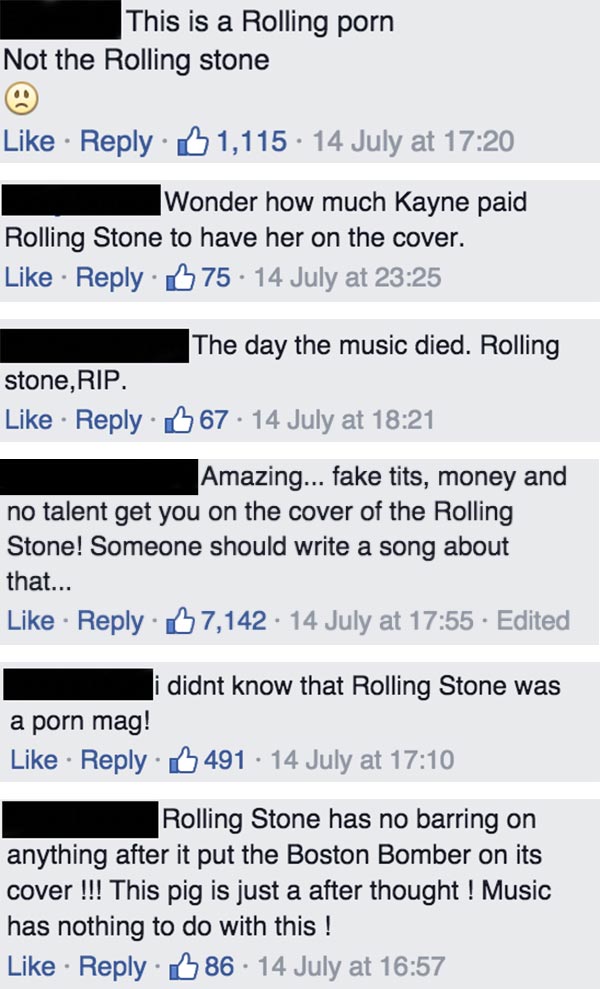 But it’s not just Facebook punters that have thrown their weight behind the idea. In the Telegraph, Anita Singh backed up O’Connor and summed up Kardashian’s life by declaring that she “became famous for an online sex tape, stayed famous because her body appears to defy the laws of gravity and is married to one of the most ludicrous men on earth. There lies the extent of her achievements.”

That’s not a nuanced view of a human life by any means. Instead, Singh panders to the tabloid representation of Kardashian, West and celebrity more broadly. The sex tape that Kardashian became famous for was not an attempt to find fame, but a vindictive and abusive breach of trust. In a piece on Kardashian’s latest book of selfies Aimee Cliff in The Quietus remarked, “For any woman in the public eye, being able to tell your own story is an immensely valuable position. For Kim Kardashian especially – someone who was a victim of a very public breach of trust with a sexual partner so early in her rise to fame – it’s radical.” 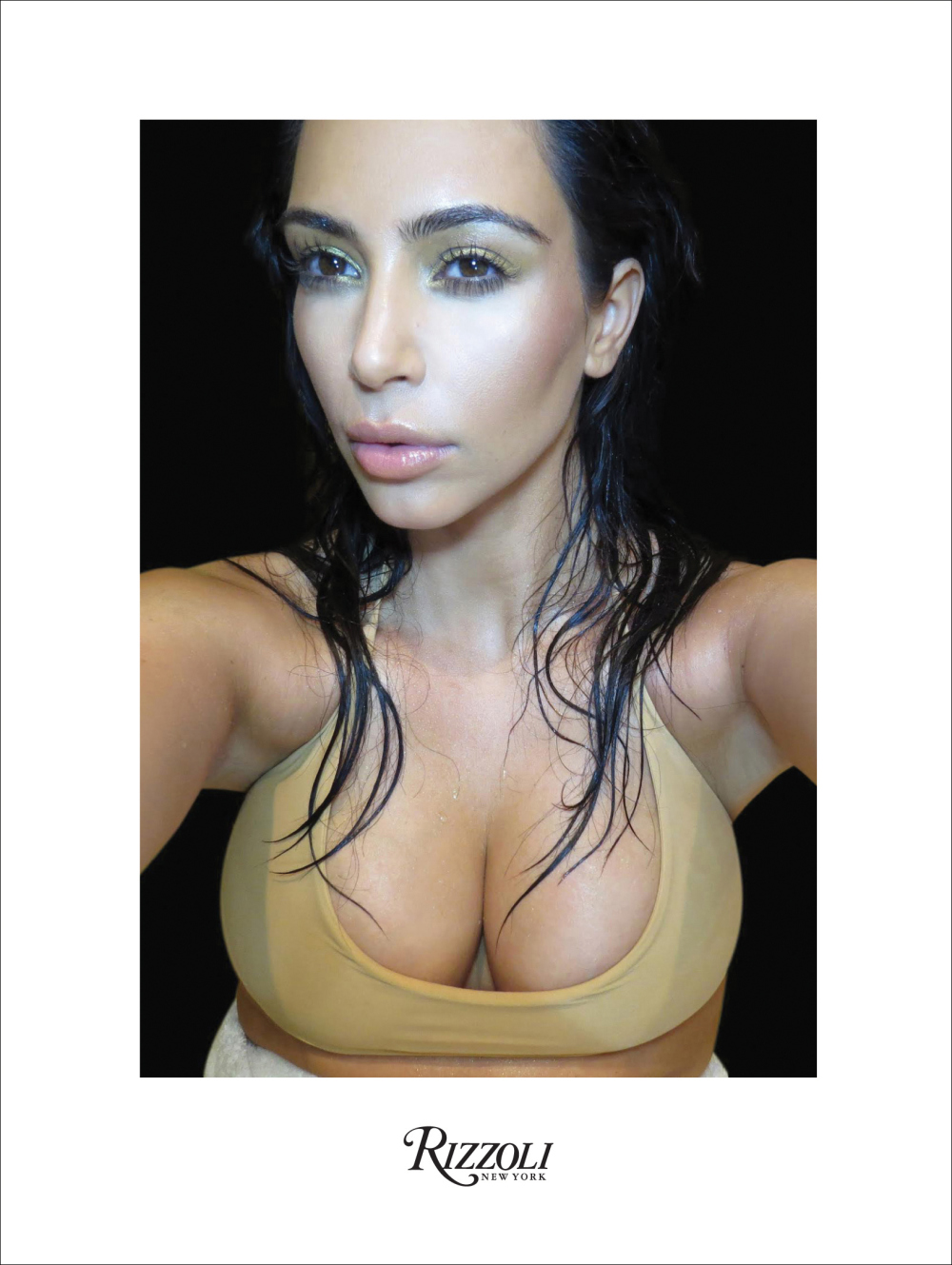 The cover of Kardashian’s ‘Selfish’

Rather than adopting this view, though, the common conception is that Kardashian is a “pig” with “fake tits,” Rolling Stone has sold its soul since its heyday of righteous Dylan-loving, Hunter Thompson-led genius, and that pop culture is a pathetic waste of human life.

But Rolling Stone has never been a home of righteousness or underground culture. In fact, back in 2001, Michael Azzerad referred to the magazine as “indie-phobic.” Rather, it is a forum for a discussion of culture in all its forms. It refrains from shallow attacks on the zeitgeist, instead attempting to analyse our culture’s fascination with the royalty that we indulge in.

So, if music died with Kim Kardashian’s cover spread, it had somehow miraculously sprung back to life after Snooki was granted the honour of the front page in 2011. Or maybe that was just a zombie-like crawl after the stars of The Hills took the cover in 2008, putting a final nail in high culture’s coffin. Yet another Bono cover, it seems, would have gone further to appeasing people (his sunglassed face has popped up 23 times on the cover). 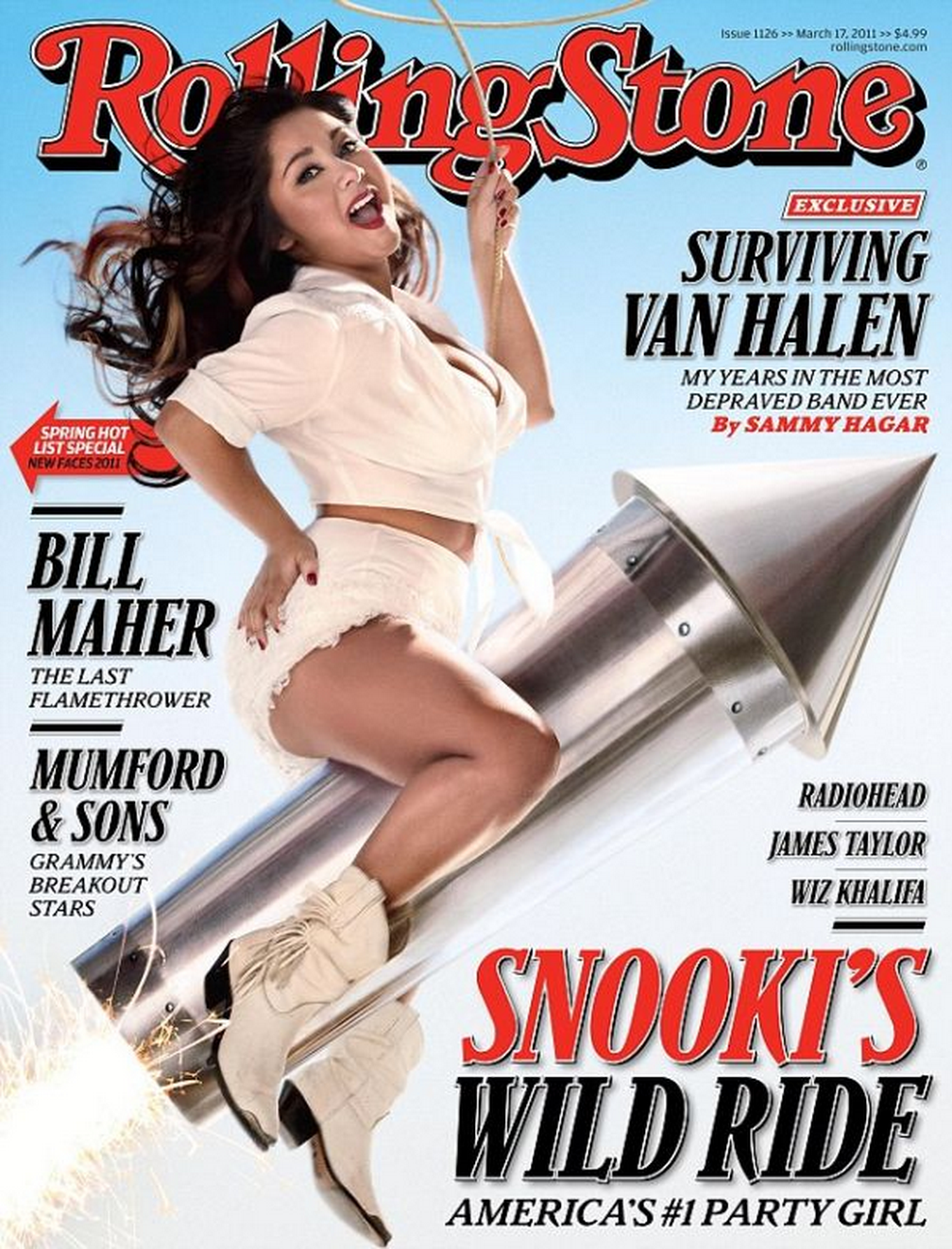 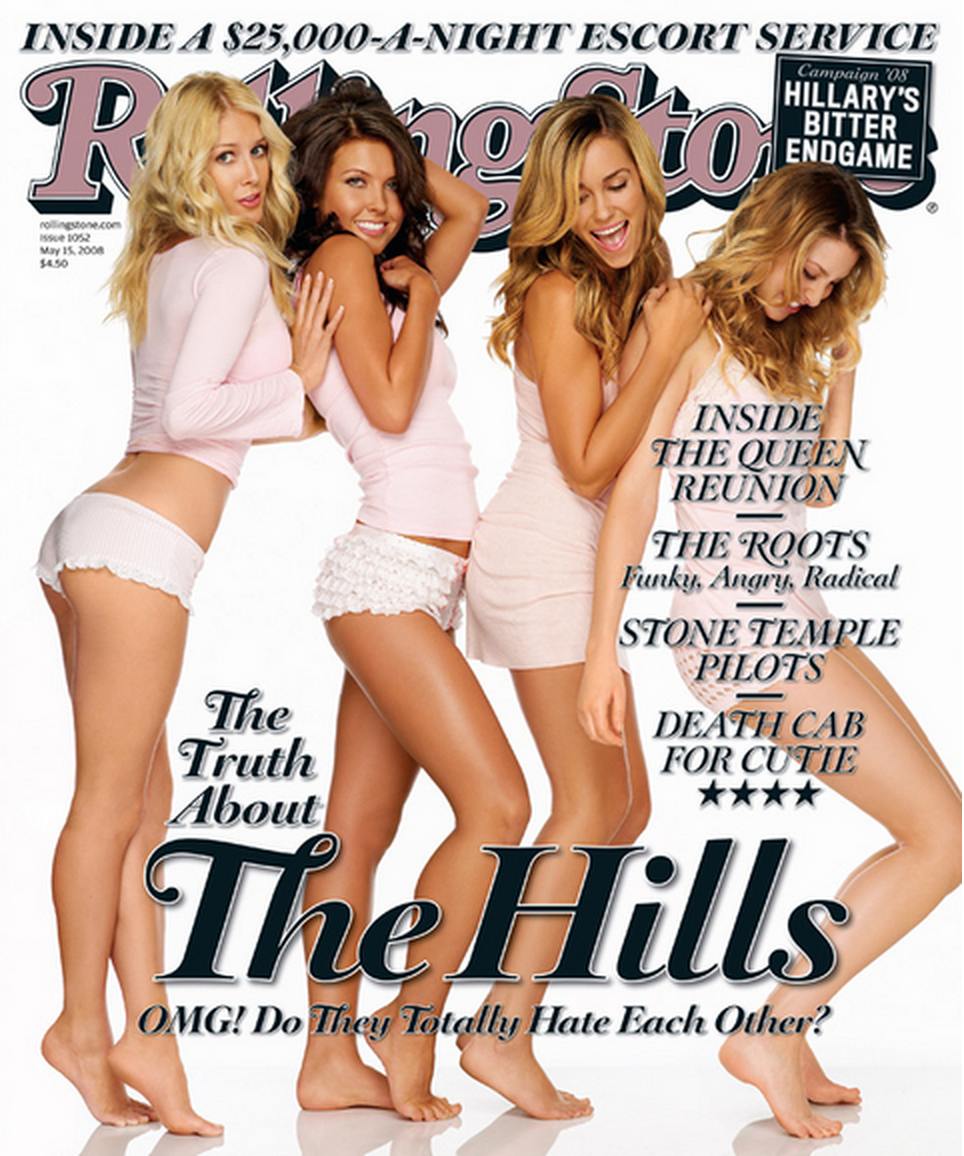 As the commenters were so swift to note, Rolling Stone should have fallen out of the public consciousness as soon as that evil, mass-murdering bastard Dhokhar Tsarnaev was plastered on the front cover. The Stone’s failing there, though, was that placing his image on the cover provided an easy distraction from the story inside, meticulously detailing how a young man can turn into a monster. It was easier for us to turn our backs on that situation and demonstrate our outrage than to acknowledge it.

The truth is that Rolling Stone‘s commitment to documenting popular culture and our fascination with it as a society is what has kept it breathing since its very inception. Its failings have come, most recently, from a drastic and costly failing in journalistic standards – something that its readers have been assured is an exception rather than a rule – and from its occasional dalliances with the rose-tinted nostalgia that the world seems to demand from it.

It’s always a shame to throw out a well-worn cliché, but when it applies so readily, it’s hard to ignore. It’s probably time to stop judging the book by its cover.

Linkedin
RELATED ARTICLES
OTHER ARTICLES
To mark the premiere of his new documentary on surfing giant Gerry Lopez, the filmmaker and former pro skateboarder sits down to share his unique brand of wisdom.
Yesterday, rail workers came together to protest poor pay, working conditions and job cuts in their latest round of strikes.
A sharp increase in officers armed with the electrical weapon is resulting in serious injuries and deaths.
Photojournalist Fiora Garenzi spoke with people still living in Eastern Ukraine, an area which seen some of the heaviest fighting since the war began.
From the chip shops, to the bingo parlors and burlesque dancers, photographer Mike Coles remembers capturing scenes of holidaymakers by the English coast.
Photographer Bud Glick recounts documenting everyday life in the area, and what it taught him about the Chinese immigrant experience.