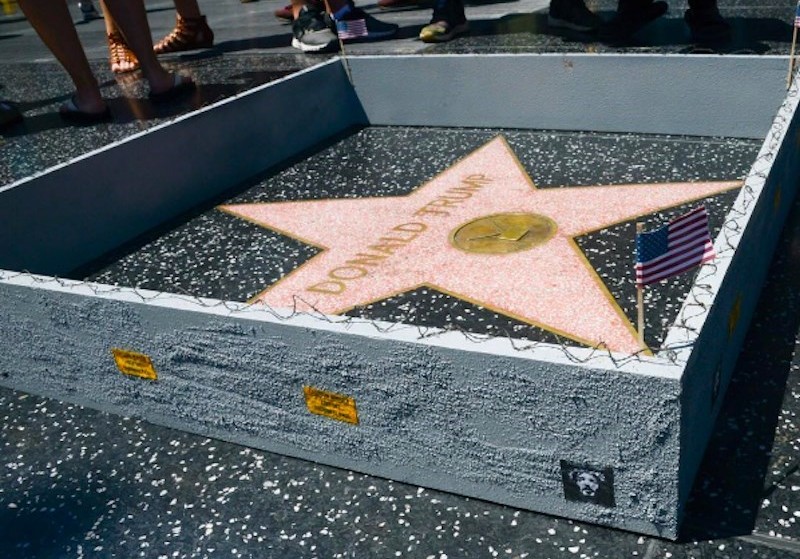 While Donald Tump and his hordes of loyal supporters have been in Ohio at the Republican National Convention, LA based street artist Plastic Jesus erected a wall to surround the Republican candidate's Hollywood star.

While Donald Tump and his hordes of loyal supporters have been in Ohio at the Republican National Convention, LA based street artist Plastic Jesus erected a wall to surround the Republican candidate's Hollywood star.

We knew it was coming. For months now, it’s looked certain that Donald Trump – the man determined to make America great again – would nab the nomination from the Republican Party and become their candidate in the upcoming Presidential election.

Some of us might have hoped that it he’d be stopped: there were plans by some Republicans to do all they could to stop him from the conference floor, mass protests planned outside might have forced a change of heart, personally I hoped he’d take to the podium and announce his entire campaign was, in fact, just a piece of performance art. We hoped, but to no avail.

In just a few short months time, Trump will be battling his way to the White House, and there’s plenty of reason to be worried. Trump has been pretty open with his bizarre and dangerous policies, from labelling climate change “just weather” to arguing doctors who perform abortions should be punished. But no proposal has been frankly as absurd as his promise to build “great, great wall” between the U.S. and Mexico.

“They are bringing drugs, and bringing crime, and they’re rapists,” said Trump of the 122 million+ Mexican citizens living across the border. Presumably the wall is to keep Mexicans out of the U.S., although Trump has never made this explicitly clear.

Having ingratiated himself with his neighbours, Trump was also keen to point out that it would be the Mexican Government who’d be expected to pay for his wall. It’s ridiculous, but with Trump’s road to the White House now looking ever more solid, these are the policies and beliefs that need to be countered.

In a small act of defiance, British-born street artist Plastic Jesus constructed his own wall to surround Trump’s star on the Hollywood Walk of Fame. Plastic Jesus, who now lives in LA, set up the six-inch high fencing this week, explaining to ABC his reasons for doing so. “His idea of isolating the U.S. is idiotic really,” argueddPlastic Jesus. “The US is made up of immigrants – how you can build a wall to supposedly protect the nation is just crazy.”

It’s a small act of defiance, but in the coming weeks and months we’ll no doubt be seeing more creative actions from Americans desperate to stop Trumpageddon, reminding voters that a Trump presidency is a real and present danger.

Linkedin
RELATED ARTICLES
OTHER ARTICLES
The government’s brutal crackdown on NGOs has left victims of rape without anywhere to seek help. And now, as the country plays a key role is Russia’s war, things are only getting worse.
Yesterday, rail workers came together to protest poor pay, working conditions and job cuts in their latest round of strikes.
To mark the premiere of his new documentary on surfing giant Gerry Lopez, the filmmaker and former pro skateboarder sits down to share his unique brand of wisdom.
Protestors gathered outside Downing Street following the latest atrocities committed by Israel against Palestinians living in the besieged strip.
With the virus now a global health emergency, we must take steps to fight misinformation and demand a swift UK-wide vaccine roll out, writes Phil Samba.
A new series of photos by Johny Pitts shines a light on communities and subcultures that have all too often been overlooked.