Art & Culture / What we learned from Howard Marks’ Lost Lecture 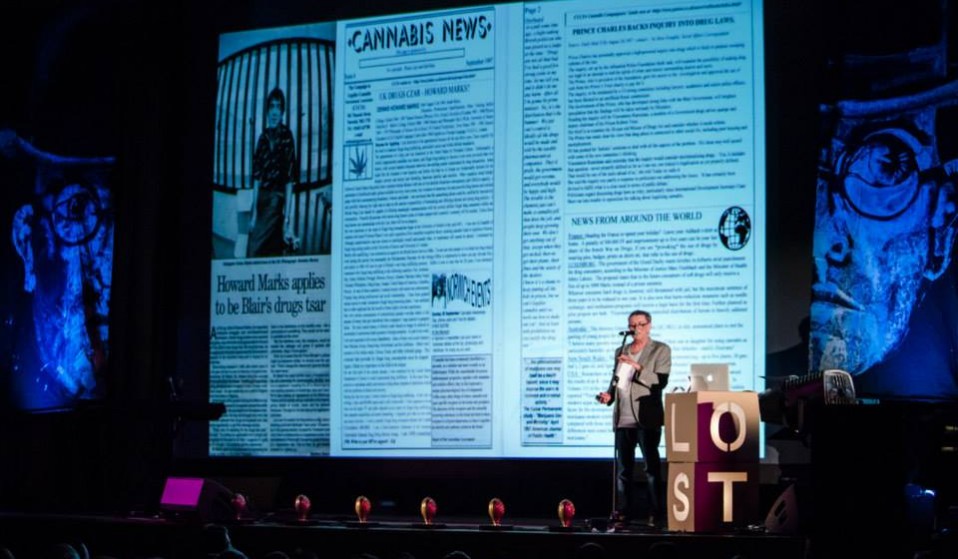 After being diagnosed with terminal cancer last year, Britain’s most notorious drug smuggler Howard Marks made a rare appearance at the Lost Lectures to talk about his former life and battle for cannabis legalisation.

After being diagnosed with terminal cancer last year, Britain’s most notorious drug smuggler Howard Marks made a rare appearance at the Lost Lectures to talk about his former life and battle for cannabis legalisation.

If you smoked a joint in Britain in the 1970s and ‘80s, chances are you were smoking Howard Marks’ high grade. Before he was caught by the DEA in 1988, the Oxford-educated Welshman masterminded one of the world’s largest drug smuggling operations.

After serving seven years of a twenty-five year sentence in an Indiana maximum security facility, where he worked as a teacher with high level gangsters and defended other inmates as a jailhouse lawyer, Marks came out unrepentant.

He’s spent the rest of his life advocating for the legalisation of marijuana through staging a solo smoke-up protest in a London police station, standing for parliament, applying to be Tony Blair’s ‘Drug Czar,’ and scores of articles, events and marches.

His autobiography Mr Nice has sold over a million copies and he’s recounted the wild tales from his former life on stages across the globe as a stand up comedian, which he uses as a platform to argue for sane drug policy.

In Autumn 2014, Marks was diagnosed with terminal bowel cancer. He responded in typical upbeat fashion to the news, telling The Observer: “How long am I going to be living for anyway? I don’t want to be living until I’m 350!”

On Thursday May 15, a visibly-frail but lively Marks took to the stage at the Lost Lectures on Trial, in the opulent former Hornsey Town Hall in North London.

Marks is determined to carry on pushing for legalisation, sharing his story with audiences and is currently crowdfunding the definitive documentary on his remarkable life, The Real Mr Nice, in which he plans to reveal tons of new information about his drug smuggling years.

Here’s what we learned from his talk.

“I have terminal cancer, it’s entirely inoperable. I have it in my bowels, my glands and my liver. But I haven’t had a single second’s depression since I’ve been given that diagnosis. I just fight like fuck. I take chemotherapy once every two weeks. It’s like fighting the minotaur. You know you’re gonna lose. But I do that fight every couple of weeks. I’m going to fight the fucker and beat it if I possibly can.”

The best shit ever

“That’s an easy question to answer. The best hash I ever smoked is Nepalese hash from a particular place in Nepal called Mustang. The time I smoked it was 1976. I brought some back: just a couple of kilos, nothing impressive. It was just one of those really wonderful Himalayan highs, you know. You’re up there with Shiva, it’s none of this fucking skunk nonsense or anything like that. You’re just up there, close to the sun. Stoned out of your fucking head. All I remember now looking back is that everything I looked at was either very funny or yellow. It was wonderful. There wasn’t anything that didn’t fall into one or other of those two categories.”

“I think politicians are more corrupt that non-politicians, generally, and lie more. But if more than half the country wanted to legalise dope, you’d be surprised how many politicians would want to as well. It just hasn’t reached that point yet where a significant majority of people in the country want dope legalised. Until it does, the politicians ain’t getting on board for sure. They’ve got no alternative agenda, they just want to stay in power and fuck people up.”

“I did a number of silly things looking back. I stood for parliament in four separate constituencies simultaneously. Because you’re allowed to stand in more than one, but you’re only allowed to sit in one. Obviously I didn’t get in. I mean, have you tried getting a bunch of stoners to even register? What the fuck would I have done if I’d got in anyway? Skin up rather pathetically during question time? Trip balls at the House of Lords? Have it turned into a perpetual rave club so people can work when they wanted on flexi-time, no… Basically all I learned was pretty much every politician I met, with the exception of one or two, is a complete wanker. A lying wanker! And I knew that anyway…”

We caught Howard at the Lost Lectures, a series of alternative talks in secret venues. Catch part two of Lost on Trial, Friday May 15, at Hornsey Town Hall.

Linkedin
RELATED ARTICLES
OTHER ARTICLES
The workforce is now gearing up for industrial action after receiving a measly pay rise, reports Ella Glover.
Thousands attended the annual event this year to wheelie through the city and call for ‘knives down, bikes up’.
Financial turmoil is pushing people who work in the sex industry into more dangerous and desperate situations as a means of survival.
The idea that a younger generation is abandoning work has become a popular narrative online, but it doesn’t necessarily reflect reality.
A group of young Palestinians have found temporary freedom in the act of parkour, reimagining wreckage and ruins as a series of high-octane playgrounds.
Birdy Chu reflects on documenting the historic moment in which the territory was formally passed back from the UK to China.