Art & Culture / Is live streaming the future for performance art? 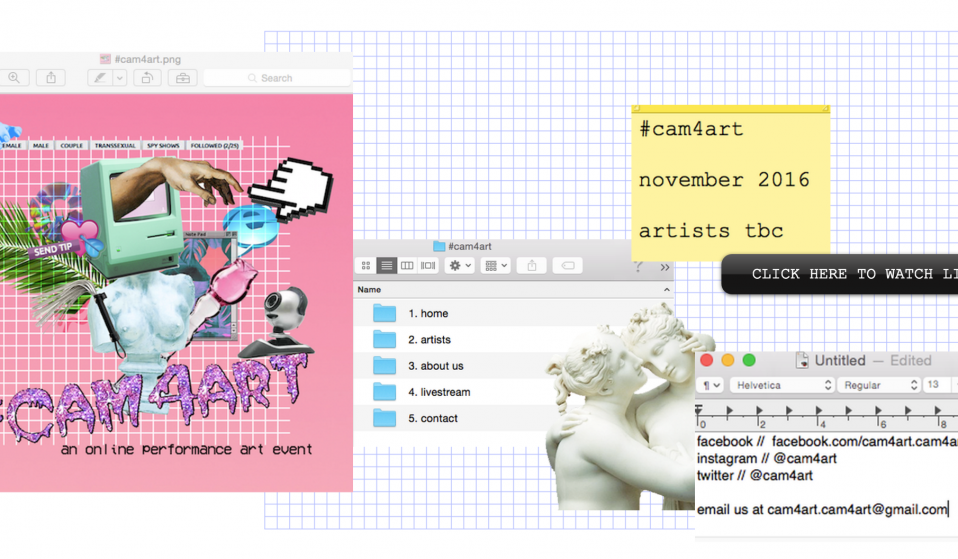 The way we consume and present art is always changing, and now #Cam4art are hoping to drag performance art into the digital age with a new live streaming project.

The way we consume and present art is always changing, and now #Cam4art are hoping to drag performance art into the digital age with a new live streaming project.

Creative expression, by definition, is constantly evolving to respond to the world in which it’s developed. Over the past few centuries, artistic trends have undergone a huge transformation – from the classic portraiture and realism of the late 1800’s, abstract expressionism of the mid 20th century to the postmodernism of recent times. Now that we’re firmly in the all-consuming grasp of the digital age, it’s inevitable that the art we consume, and the way we consume it, is going to move with the times.

#Cam4art is an online webcam-based performance art event that responds to digital intimacy and internet live-stream culture. Creator Nick Tee says that “in Performance Art, there is a history of performing to the camera, but very rarely does that involve live-streaming.”

Through streaming directly from bedrooms, studios, galleries – or really anywhere with a webcam and an internet connection – Nick wants to give the artist more control. “By creating it online, we can bypass venue rental, box offices, these restrictions.” This is raw performance art, straight from the horses mouth. 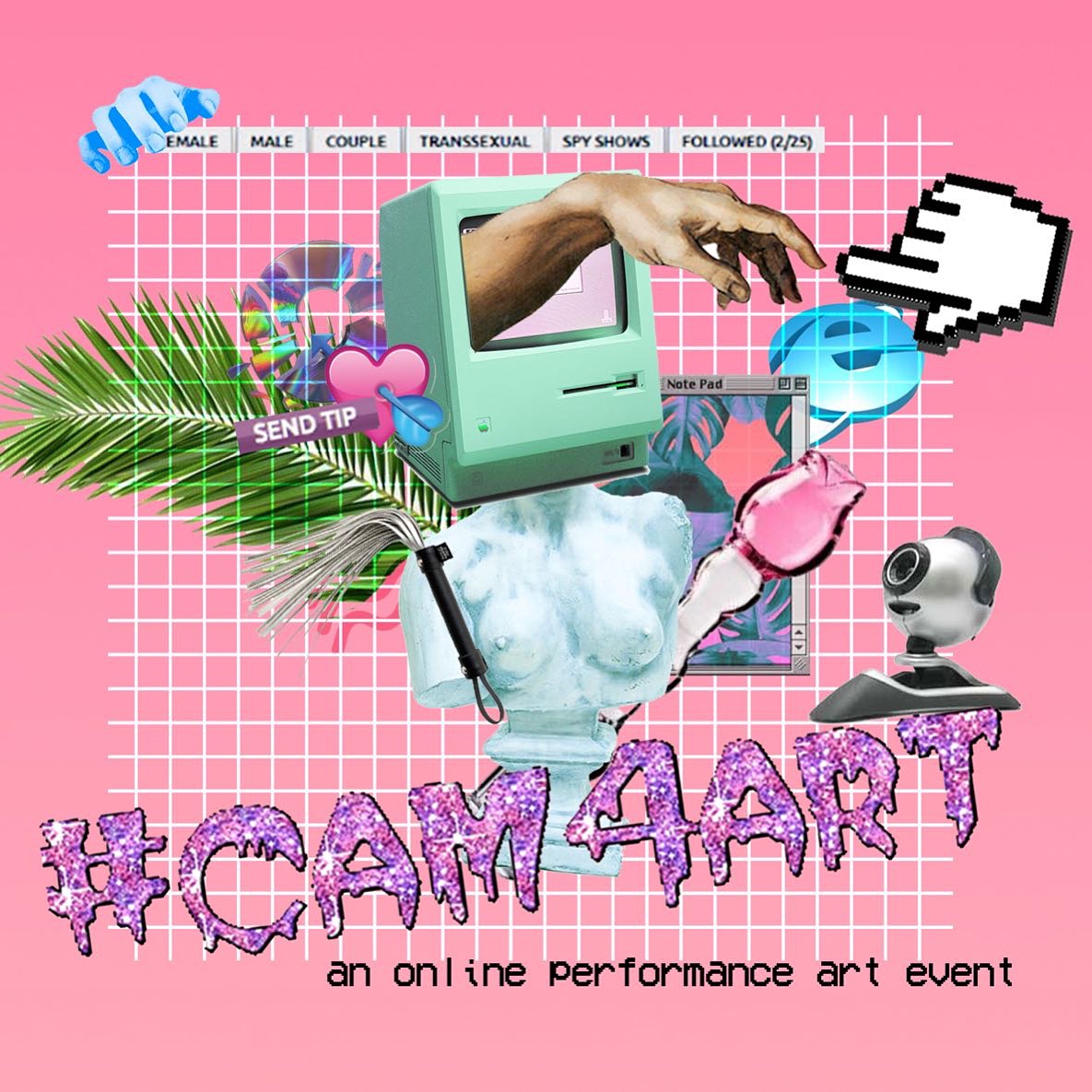 But what exactly is the ‘live-streaming’ culture? In East Asia, where Nick is from, live-streaming is a huge part of 21st century culture, and well-established companies are starting to tap into its advertising potential on a grand scale, with the likes of Sony and Oreo jumping on the bandwagon.

Existing at the intersection between Skype, Facebook and video sharing sites like Vimeo, one market research company in China predicted the industry to be worth nearly $16 billion (106 billion yen) by 2020.

But although live streaming has been alive and well for over a decade, and is utilised for a load of different reasons (live streaming gigs, for example), what has really captured Nick’s imagination is its power as a social media, to connect artists and their audiences with unprecedented reach.

The idea for #cam4art originated in response to cam-girl culture, which essentially takes the form of a virtual forum where camstars can perform for an audience and interact with them in real time. “We found these cam sites fascinating because sex workers had carved out a virtual space where they could perform relatively autonomously and on their own terms,” says Nick. “They could receive financial remuneration almost immediately through tipping of virtual currency.”

This is the system which is creating a growing number of social live-stream stars in the far East, who are monetising their up-and-coming status for instant gratification.

But Nick’s project isn’t about money. It’s volunteer-led and completely unfunded; they’re considering looking into sponsorship, he says, but only so they can pay the artists who contribute.

“It’s a project that democratises art but also leaves space to interrogate the complexities of internet culture and how we connect through performance,” he tells me over email,“and probably how we can rethink the way we connect to art audiences.”

That’s what sets the social live-stream model apart from other projects of a similar thread; much like the live-stream stars broadcasting from their bedrooms, #cam4art’s performance artists are offering a no-holes-barred insight into their creative process, with no smoke, mirrors or triple-figure commissions to up the anti.

“Of course there have been projects like National Theatre Live where big budget productions get streamed into cinemas, but they’ve traditionally been [established shows] that already play in huge theatres,” says Nick of the big-scale project launched in 2009, which serves to distance the audience even further from the live performance.

“Also, the cameras are just secondary to the action onstage and are used at a distance. There is the Tate Live Performance Room, but similarly, they have huge budgets and the ability to commission work. With #cam4art, we look for artists who are willing to reinvent their practice by either creating new work or adapting existing work for this new medium.”

So does instantaneous art-from-the-airways signal the end of galleries and theatre? Performance art is a notoriously sensory practise, and often requires the audience to be able to smell, feel, and taste the experience. It does beg the question, if we are separated from the performer by potentially thousands of miles and a lagging internet connection, will they really be able to communicate their expression as effectively as they might if we were in the same room as them?

But the democratisation of art, really, can be no bad thing. An industry that is often limited in its reach dependent on audience location and bank balance should, and no doubt will, benefit from live streaming culture and it’s ever-expanding influence. If we can all enjoy, or even broadcast, our art from the comfort of our bedrooms, surely that’s the best way for creativity to thrive.

#Cam4art is currently running an open call for artists to take part in a live-streamed performance.

Linkedin
RELATED ARTICLES
OTHER ARTICLES
With the UK now set to run out of vaccines, people working in the sex industry – particularly outside of major cities – have been left especially vulnerable, reports Brit Dawson.
In the latest instalment of Photographers in Conversation, the creator talks portraiture, platforms and taking inspiration from Little Simz.
The author discusses her new memoir, which offers a sobering reflection on the racism and otherness she’s experienced along with a joyful celebration of her culinary heritage.
A sharp increase in officers armed with the electrical weapon is resulting in serious injuries and deaths.
Steel City is often overlooked when it comes to the country's cultural radar despite its role in shaping electronic music.
With the virus now a global health emergency, we must take steps to fight misinformation and demand a swift UK-wide vaccine roll out, writes Phil Samba.