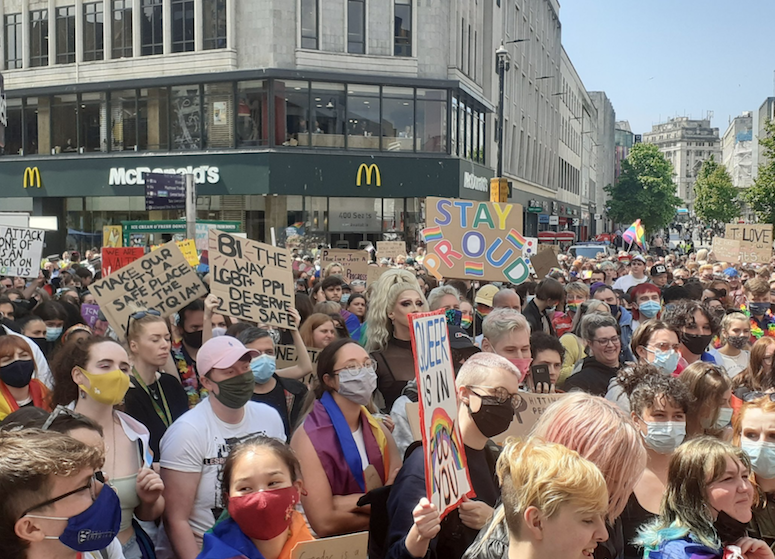 Earlier this week, following a series of violent attacks on queer people in the city centre, demonstrators came together in a moving show of solidarity.

Earlier this week, following a series of violent attacks on queer people in the city centre, demonstrators came together in a moving show of solidarity.

On a sunny Tuesday afternoon (June 22), an energetic crowd of hundreds of protestors – many carrying placards and waving rainbow flags – flooded into Liverpool City Centre. The demonstration was intended as a show of defiance following a series of violent attacks targeting LGBTQ+ people in the city centre.

Among those who showed up in support of the protest was Liverpool Mayor Joanne Anderson. She condemned the violence in a speech addressed to the crowds, lamenting these “horrific acts [that] have no place in [the] city.”

The protest wound its way through the city’s streets, with people chanting “Queers Lives Matter” and “We’re here to stay”. It is understandable that LGBTQ+ people in the city are scared and angry. Three young people were attacked and subject to transphobic slurs on May 16. A young woman, her girlfriend and her sister were attacked and threatened with rape and murder in Liverpool’s ‘Gay Quarter’ later that month.

Earlier this month, another gay couple was attacked at knifepoint by multiple people, who are said to have shouted homophobic slurs. Two 19-year-old friends, first year Liverpool Hope University students Curtis Stewart and Josh Ormrod – who are both bisexual – were beaten only days apart in the city centre. A matter of days later, recent graduate Tyler Jones posted his badly beaten face on social media in the aftermath of an unprovoked homophobic attack.

Concert Square and neighbouring areas have all been host to a spate of violent incidences in the last few months, with the queer community disproportionately affected. Many of these cases go unreported. The general consensus among protestors is that Liverpool, as a city, is becoming less safe.

Hundreds of people are currently in the streets of Liverpool, protesting in support of the LGBTQ community following a spate of homophobic attacks in the city. Our @auntiefuturism is reporting from the scene. pic.twitter.com/Ni2yNawtUs

Matty, age 23, was one of the protestors who attended the march. “My friends were victims of the initial attacks in the city centre,” he tells Huck. “It has shaken me up a bit, but I realise it’s probably been more overwhelming for them. But speaking as a gay man in Liverpool, I’ve been reluctant to go to town on nights out, or just walk in the street in the daytime.”

At the core of this demonstration was a need to hold one another through strife. The co-organiser of the demonstration, 20-year-old Angel, read aloud to the crowds a pre-written statement by one of the victims, which said: “If my experience can be used to help others, to make everyone aware of the threats we face, then this didn’t happen for nothing.”

Speaking to Huck after, Angel says: “There is no single organiser of this event, it’s been a group effort. We know these people, they come to our clubs, they’re friends of ours, family. We’re all here because we’re fed up. This protest has been a symbol of how angry we are. Liverpool used to be a safe place to live and it’s slowly being taken over.”

With attacks on the rise, the burden of ‘passing’ as straight in order to comfortably move through the town is becoming increasingly stifling. Matty and the two other protestors he was with tell Huck they have been made hyperaware in recent weeks of displaying ‘outward expressions’ of queerness and have been consciously concealing aspects of their identity in a bid to evade harassment.

Protest today is lively, as it makes its way around Liverpool city centre. pic.twitter.com/ztFLkmMFjr

Ideally, they would like the freedom of femininity, the joy of camp and the liberation of masculinity on their own terms. Yet as it stands, the bodies of queer Liverpudlians are being targeted more than ever. This shouldn’t be the case, they say. The safety to freely occupy all areas of the city centre – not just the regions’ Gay Quarter – must be made possible.

Xander, age 23, who was also involved in organising the demonstration, expresses a similar sentiment. “We’ve all been through it as queer people,” he says. “We’ve all been attacked, whether it’s verbal or physical and we’ve all just had enough of it. No place is safe to be queer.”

Indeed, the idea of Liverpool as a liberal haven is at odds with the lived experiences of its most marginalised. “I’ve always thought of Liverpool as this nice, left-leaning place. But now I don’t know,” says Ewan, age 20. He cites the problem of Scouse exceptionalism – the idea that Liverpool is great, special, and different – and its potential to erase the very real concerns brought up by minority groups.

These concerns are often centred around harmful encounters with the police. “Queer people, queer people of colour, Black people especially, don’t report [being attacked] because they know they won’t do anything,” explains 20-year-old Felix, who was at the protest. “There’s mistrust between the LGBTQ+ community and the police – that’s not our fault. This has been going on for ages and the police won’t do anything about it.”

As the protest spilt into the streets, stopping occasionally to issue the reminder that queer lives exist and are valued, onlookers busied out of surrounding high-street shops to observe and to offer their support. Some businesses made commitments to the march throughout the day, with Lush offering space for protesters to create placards in advance. Undeterred by the heat, attendees weaved through Church Street and into the heart of the capital – the site where many of the reported incidents took place.

“The support for this has been overwhelming,” says Kolade, 21, an instrumental voice at last year’s Black Lives Matter protests that took place on the steps of St George’s Hall. “It’s important we celebrate who we are, our intersectionality and embrace our sexuality but at the end of the day, we need to keep in mind what we’re fighting for and who we’re here for today.”

Co-organiser Naya says she was deeply moved by the outpouring of support. She expected fifty people to attend at most, but instead over 200 arrived. In her view, the need for reflection on behalf of those who had been brutalised was most important – many of whom were close friends and acquaintances. “We’re here to raise awareness. It’s a shout of recognition, it’s a shout to say we see you and we want everyone else to see you as well,” she tells Huck.

In the wake of these acts of violence, it’s clear that more must be done to address the hostility faced by the LGBTQ+ community in Liverpool. Calls for increased allocation of resources to police and increased presence are not the answer – in fact, these ‘solutions’ threaten to exacerbate existing problems. The lesson that ought to be taken from this rally is that the task of ensuring the safety of LGBTQ+ individuals must be a collaborative vision, one that is imagined by and for us.

Linkedin
RELATED ARTICLES
OTHER ARTICLES
Cindy Campbell recounts how her brother ushered in a new era of musical culture at a party she held in the Bronx in ‘70s.
A 37-year-old woman shares how her abortion led her to become a clinic worker, and the abuse she’s received in that role.
The two-day long event returned to London this year, showcasing a spectacular parade, steel bands and Caribbean food.
By turning a real-life crisis into daytime television fodder, TV bosses have once again shown themselves to be completely out of touch with audiences.
Thousands attended the annual event this year to wheelie through the city and call for ‘knives down, bikes up’.
Yesterday thousands gathered outside Buckingham Palace after news of the Queen’s death broke.