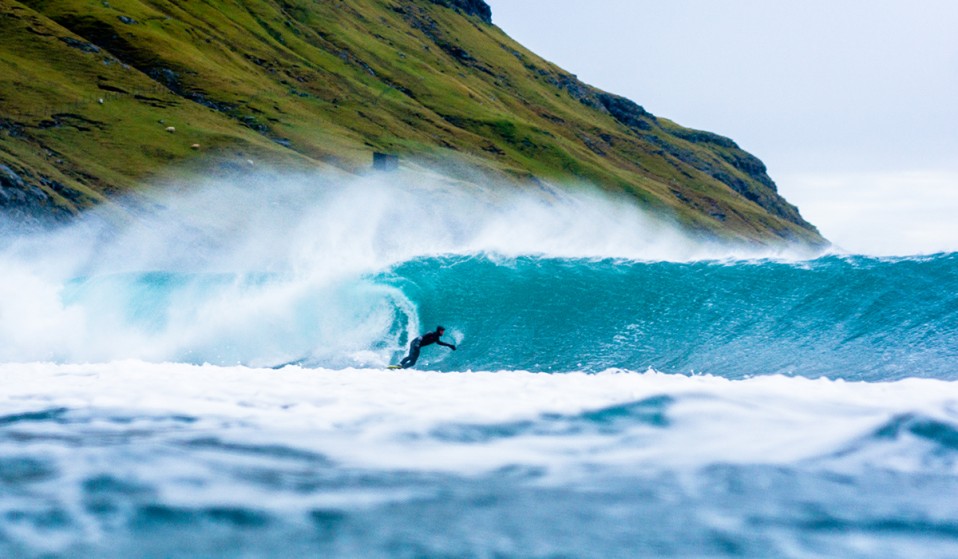 The London Surf / Film Festival has gone from strength to strength over the last five years. With the latest edition starting this week, co-creator Chris Nelson explains how it all began and celebrates its communal spirit.

The London Surf / Film Festival has gone from strength to strength over the last five years. With the latest edition starting this week, co-creator Chris Nelson explains how it all began and celebrates its communal spirit.

The London Surf / Film Festival celebrates the cream of surf culture. Besides cinema, the festival includes talks and exhibitions to unite lovers of surfing and takes place in London.

Surf writers Chris Nelson and Demi Taylor started the festival in 2011 with the idea of community in mind, aiming to fill a gaping hole in the UK surf culture by premiering films from homegrown as well as international talent.

Huck caught up with founder and director Chris Nelson to talk about this year’s edition and how the festival has developed since its inception.

What is the background to the festival? How did it first come together?
We were sitting around the kitchen table in our cottage in Cornwall six or seven years ago talking about the fact that we’d love to go to a proper evening of surf cinema. There wasn’t anything really happening in the UK, nothing that really celebrated surf culture as an entity – showcasing film, art, music, artisans, photography and it seemed crazy as we have such a thriving and diverse surf community here.

I was writing a book called Cold Water Souls: In Search of Cold Water Surfing’s Pioneers and a few months later I was chatting with Long Island surfer Tyler Breuer who founded New York Surf Film Festival. We talked about what a festival can do for a community and the timing just felt right, so myself and Demi Taylor founded the London Surf / Film Festival in 2011. We’d been involved in surfing for 20 or so years, writing about it and working with brands. I’d worked as a magazine editor and already knew a lot of the photographers and filmmakers so it just seemed like a natural step.

There was also a fresh and exciting movement in UK surf filmmaking spurred on by the likes of Mickey Smith that was approaching filmmaking from a different angle and we were keen to give British and Irish filmmakers a platform to share their work on the world stage.

What was it about surfing and film that made you want to bring both together?
When I started surfing in the North East in some 25 years ago, you’d still get together in a local hall and watch the latest release on a projector. You can’t beat that communal experience of watching a movie on the big screen for the first time, sharing the stoke with likeminded folk, everyone “oohing” and “aaahing” at the same wipe-outs or massive barrels, then talking about the film after. I felt like that element had been lost with people just consuming surf edits alone, online. We wanted to bring surfing back to the big screen and celebrate peoples projects and turn surf movie releases back into a real ‘social media’ experience.

Why stage it in a big city like London?
There were a couple of reasons to come to London – firstly we wanted this to be a truly national event, an international event even, so coming to the capital seemed like the natural thing. It’s also a cultural hub where thousands of surfers live – surfers who are really committed to the waveriding lifestyle, who head off every weekend to the Southwest, Wales, the Northeast – or even jump on a plane. They have a real thirst for surf culture, are very knowledgeable and stoked on good surf movies.

How has the festival changed/developed since it started 5 years ago?
Year one was important in that the line up established the credentials of the festival: I think some people imagined it’d be all Point Break and Blue Juice. We curated a diverse line up of films – art house, documentaries, as well as surf action premiering films from the likes of Kai Neville and Cyrus Sutton. We hosted incredible filmmakers like Keith Malloy and there was a great vibe. We had filmmaker Q&As, music and a gallery. We also established our Shorties Short Film Competition for homegrown filmmakers and it really captured global attention. The winning film Uncommon Ideals went viral and was Surfer Poll nominated. Ultimately we put surfing and surf culture at the heart of the festival and that has remained constant through out – only screening the very best surf films.

In 2011 were in The Riverside, a 200 seat venue – now sadly demolished. Last year we moved to The Genesis, a 550 seat auditorium, hosted a record number of filmmakers, plus 6 x world champion Stephanie Gilmore. We have no VIP area, everyone mixes together, we’re all united by our love of waveriding. Last year Steph stayed for three hours after her film chatting with everyone who came.

What are some of your plans for this year?
This year is our fifth edition of the festival and we’re really lucky to be working with Reef who have supported our vision and our ideas from the start. They understand that the festival is an escape for people as well as a coming together. We are running the festival over a week, with two weekends of screenings at two venues across London each hosting separate programmes with a couple of awesome pop-up events in between. On October 16th and 17th we are back at The Genesis in East London. It’s a huge venue with a great gallery and we have some massive premieres and filmmaker Q&As.

The 23rd and 24th is at the Regent Street Cinema just off Oxford Circus. We were stoked to be invited to bring the festival to this newly restored iconic venue – it’s the home of UK cinema and was the first place to screen moving images.  Showcased at both venues is the 8 Track Gallery presented by POW – a specially commissioned gallery show featuring work from some of the UK’s leading creatives in aid of the charity The Wave Project. We have a pop-up night on the 21st October hosted with Huck Magazine at 71A Gallery with a special screening of Viejo Perro. On the 22nd we’re hosting a bit of a party and pop-up at Allpress Dalston with the cast and crew of Freezing and the world’s best BBQ!

What films are you excited about for this year’s edition?
I’m really stoked about the line-up we have for 2015. We have the World Premiere from the British team behind The Shaper. Freezing is their first feature film and they approach the cold water surf phenomenon with their usual wry look with awesome results! We have the European premiere of the just completed Chris Burkard/Ben Weiland film Faroes, which is stunning and certainly stirs up the wanderlust.

We have two XXL winning big wave surfers coming to present their films – Chris Bertish with Ocean Driven and Paige Alms with The Wave I Ride. We’re also hosting the world premiere of a British film Matungou by Mr B featuring some of the UK’s best surfers in the Mentawais – including Alan Stokes, Oli Adams, Tom Butler, Adam Griffiths and Angus Scotney – who will all be there to present the film.

What are your favourite shorts from previous years?
I always love the Shorties – we established it in the first year of the festival as a platform to showcase homegrown talents on the international stage and I think it’s really helped raise the profile of UK filmmakers. Uncommon Ideals set the bar, The Shaper from Crayfish films broke new ground in being the first film I’ve ever seen about surfing that was laugh out loud funny.

What are your favourite features from previous years?
Wow, we‘ve been lucky enough to have worked with so many great filmmakers over the years bringing their films to the UK. I’ll always love Come Hell or High Water and Stoked and Brok’ from year one, but I think Unchartered Waters and Freezing from this year are really hard to beat. If you have any interest in surf culture, these films are a must see.

London Surf / Film Festival presented by Reef is at venues across the capital, 16 – 24 October 2015.

Linkedin
RELATED ARTICLES
OTHER ARTICLES
In the latest instalment of Photographers in Conversation, the creator talks portraiture, platforms and taking inspiration from Little Simz.
A series of photos by the late Jerry Dantzic taken in 1957 show a tender side to the iconic Jazz musician.
From the early originators to the female writers at the forefront of today’s scene, we talk to the artists redefining graffiti’s consciously macho origins.
Danny Burrows discusses his new series of images documenting an pacifist anabaptist community who lead an alternative way of life.
Following the release of his latest album, the rapper talks about finding a new approach to songwriting, attitudes to poverty, and why his music is more than a political statement.
We introduce our series spotlighting the voices of people who’ve been impacted by anti-abortion laws and anti-choice protestors.