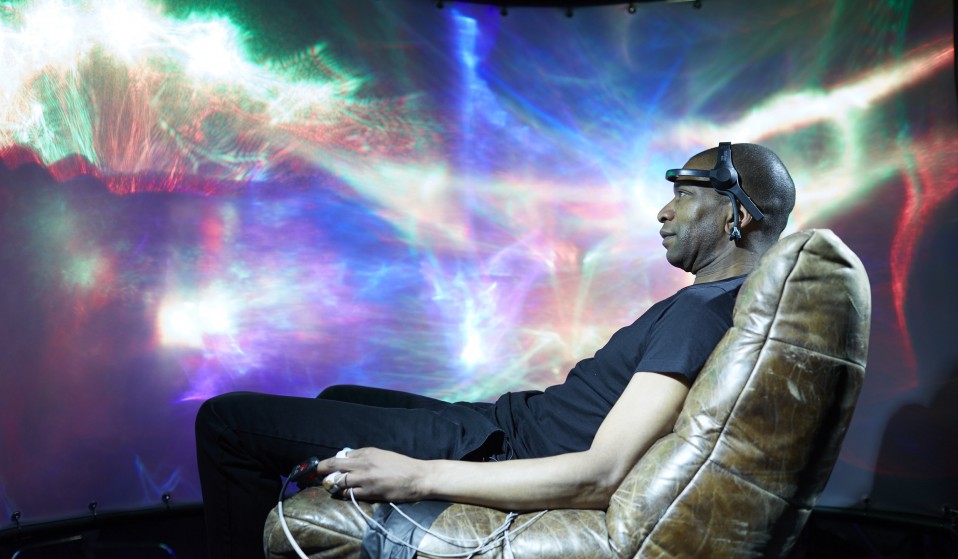 We find out how sci-fi artist Marcus Lyall, one of MINI's four 'future shapers', reads human emotion to be able to change it with sensory experiences.

Marcus Lyall is one of four 'future shapers' MINI, part of the BMW Group, is working with as part of the group’s centenary celebrations. Here, we find out exactly how the sci-fi artist reads human emotion to be able to change it with sensory experiences.

Marcus Lyall is something of a pioneer. Straddling the line between fine art and cutting-edge commercial lighting design, his work is equally impressive, whether he’s producing an installation for a gallery space or masterminding the visuals at a Chemical Brothers concert.

His latest project — an interactive light and sound installation as part of iconic car brand MINI’s Future Shaper Project — is perhaps his most technologically advanced yet. The Future Shapers’ Project invites artists working at the frontier of design and technology to explore the future of personalisation. 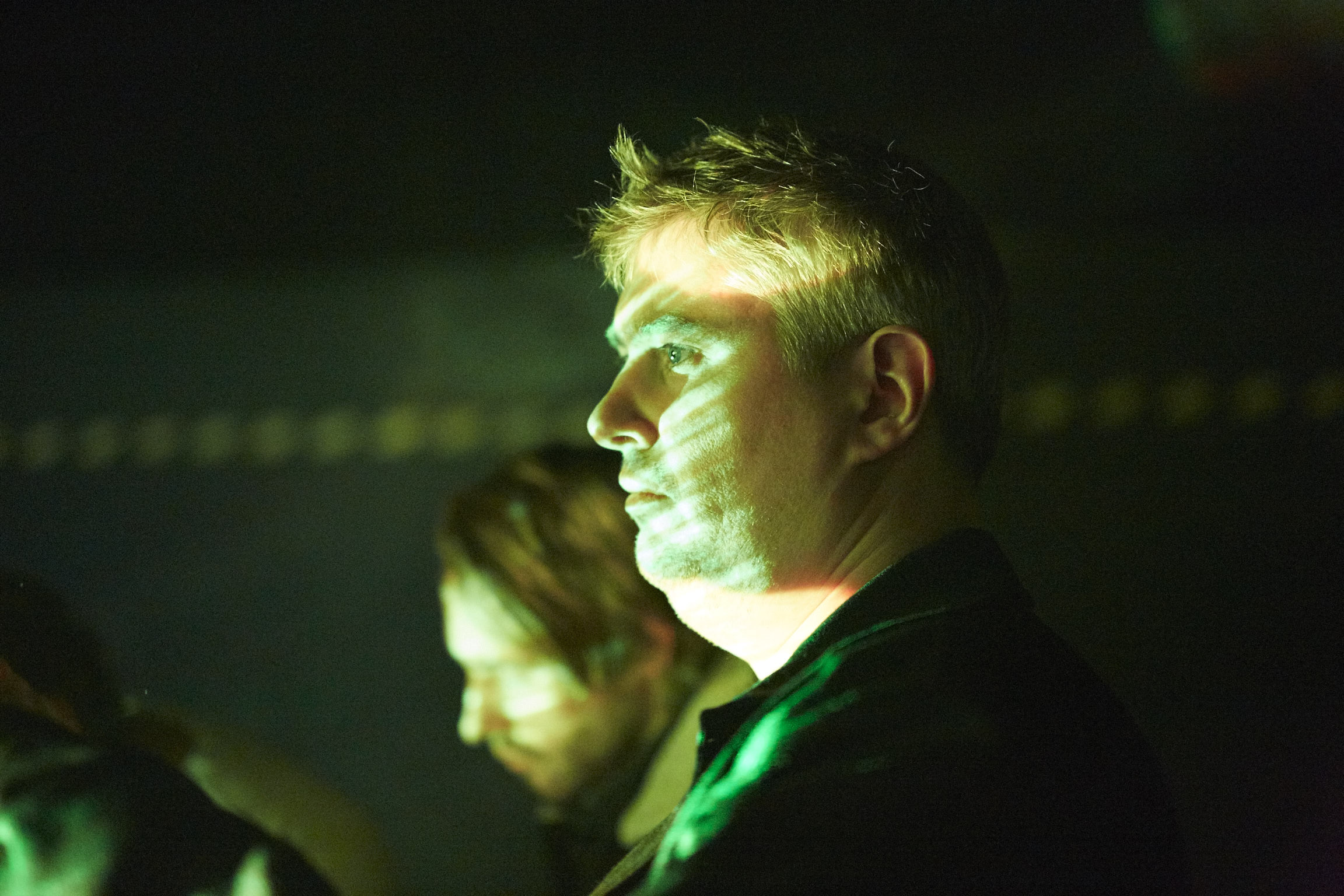 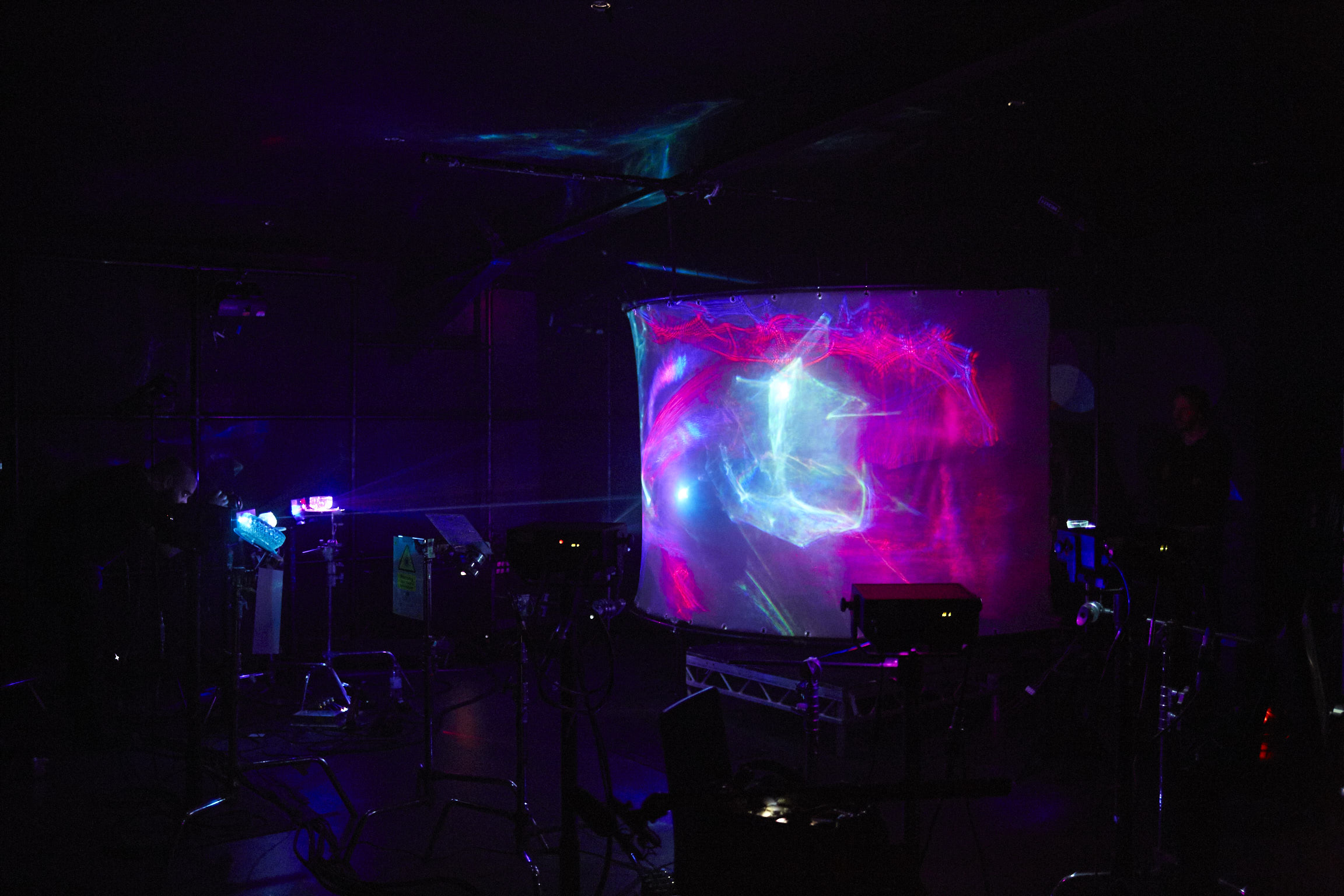 Using experimental biofeedback technology, the goal for Lyall is to produce a customised experience that actually changes the emotional state of the subject.

Excitingly, Lyall believes the system he’s developing could become part of everyday life. He suggests driverless cars could lose the windows and become immersion chambers which allow passengers to alter their mood in preparation for their destination. Making themselves calmer before a job interview, for example. Or getting pumped up before going out at night.

We caught up with Lyall to find out what it’s all about.

So, how does this actually work?
Basically, we’ve got a bunch of biosensors hooked up to a test subject — an EEG headset which monitors brain activity, an ECG which monitors heart rate and galvanic skin response sensors which monitor the state of arousal.

We’re taking all of that information and putting it into a computer which has this machine-learning algorithm, so it learns what relaxation is like for you. The idea is that we’re using that data to influence this light and sound installation.

Using lasers and diffracted glass objects we’re forming this kind of abstract display, which looks a bit like a Turner painting. 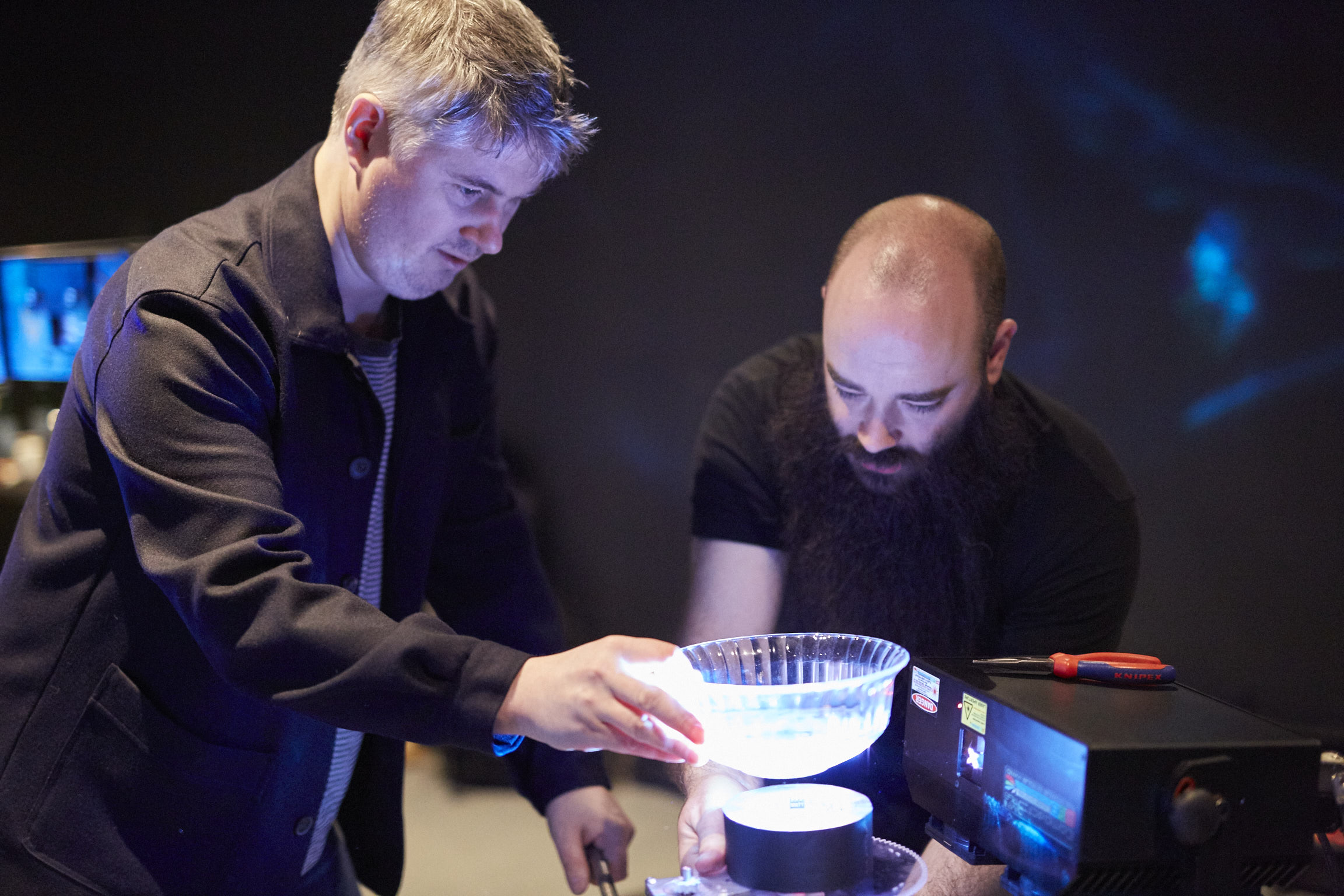 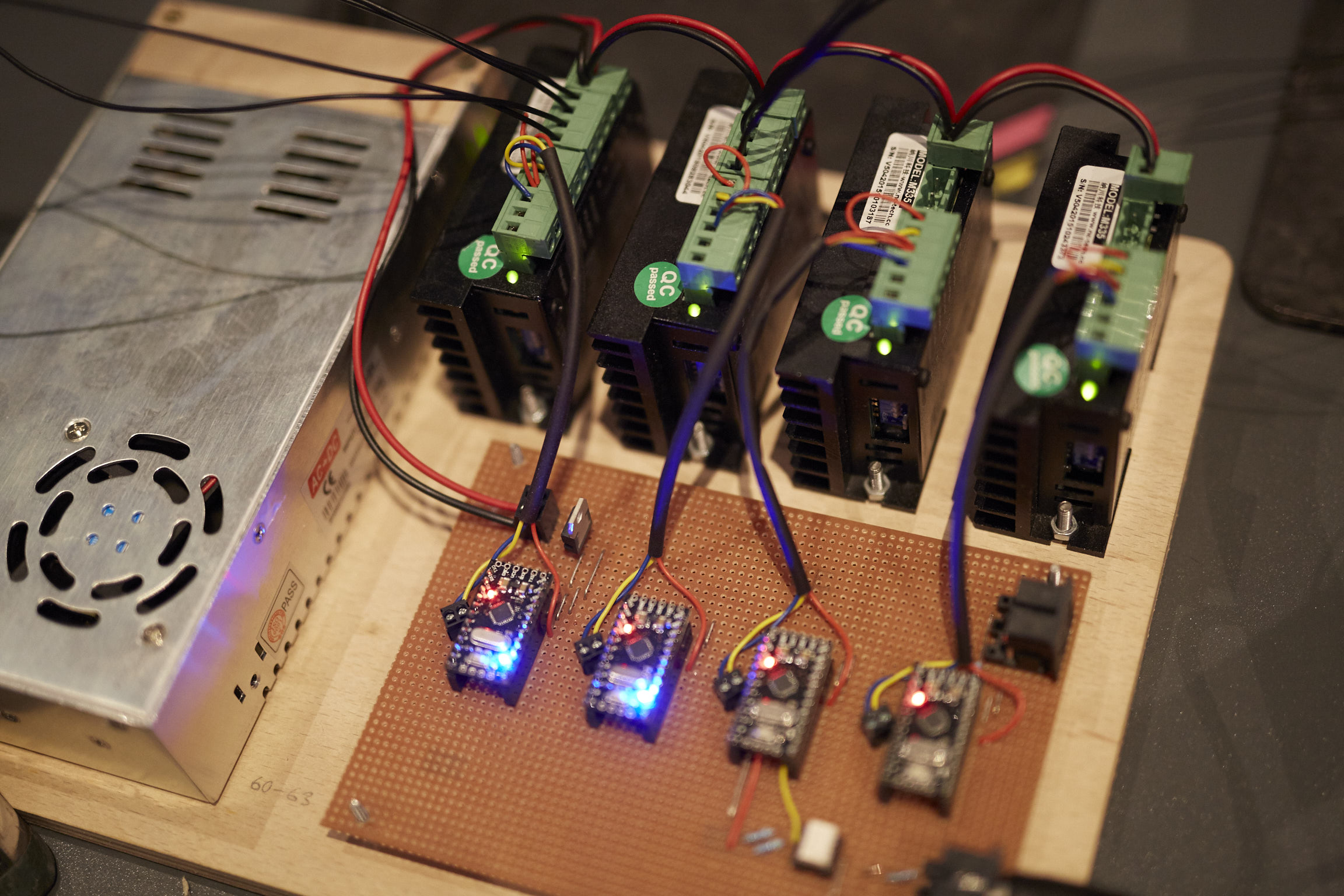 How does this make the person experiencing it more relaxed?
It’s trying to draw you in, taking you away from everyday life and replacing it with this sort of an immersion chamber or mandala, something you can focus on to guide you to a different state. The nice thing is that it’s very abstract and otherworldly.

If you know where you’re heading — we have a thing where the more relaxed you are, the whiter the light goes — you can move towards that. You’re not doing any of this stuff consciously; it’s your subconscious mind. Hopefully, what happens is you stop thinking, “did I leave the oven on?” and enter a state of calm. 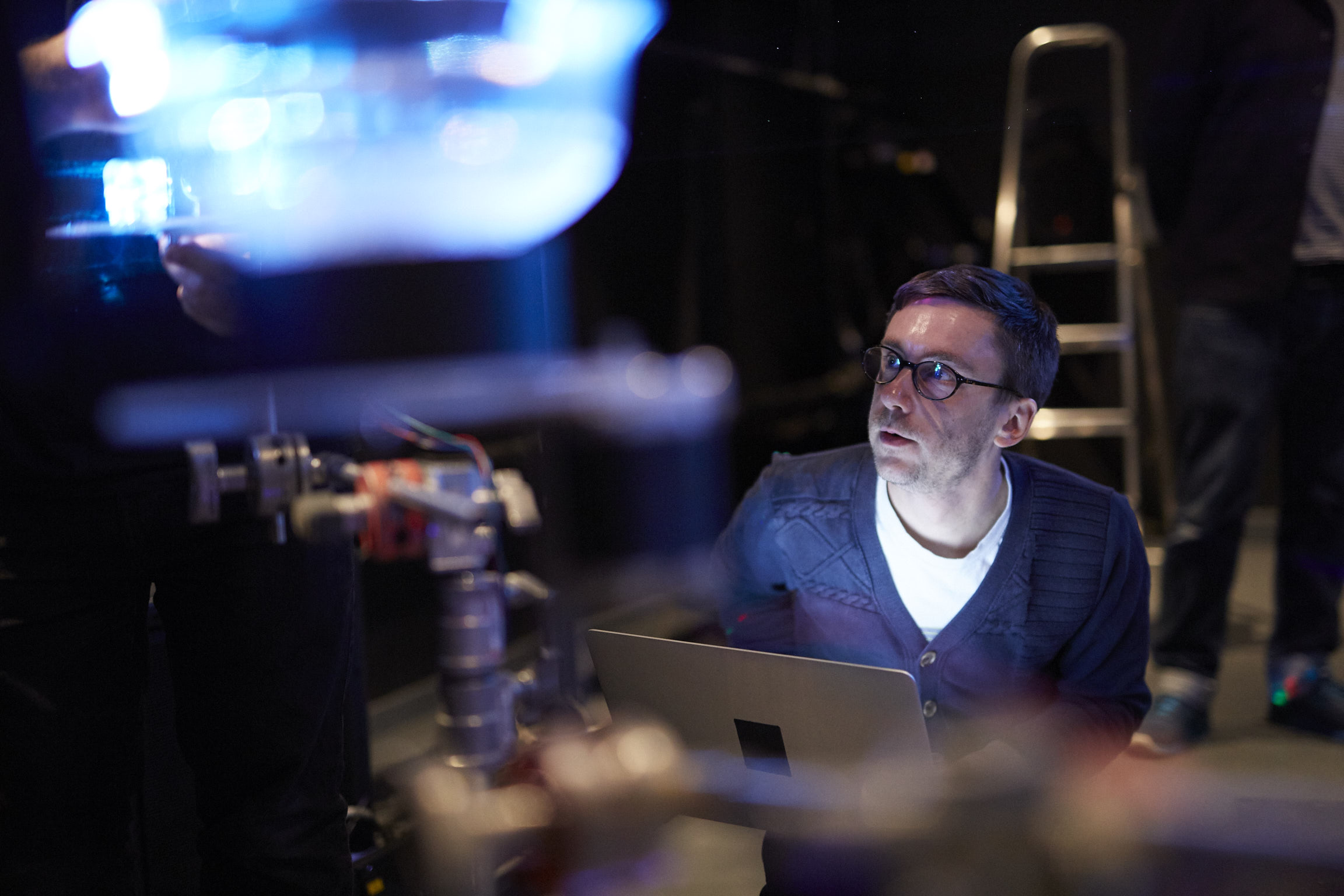 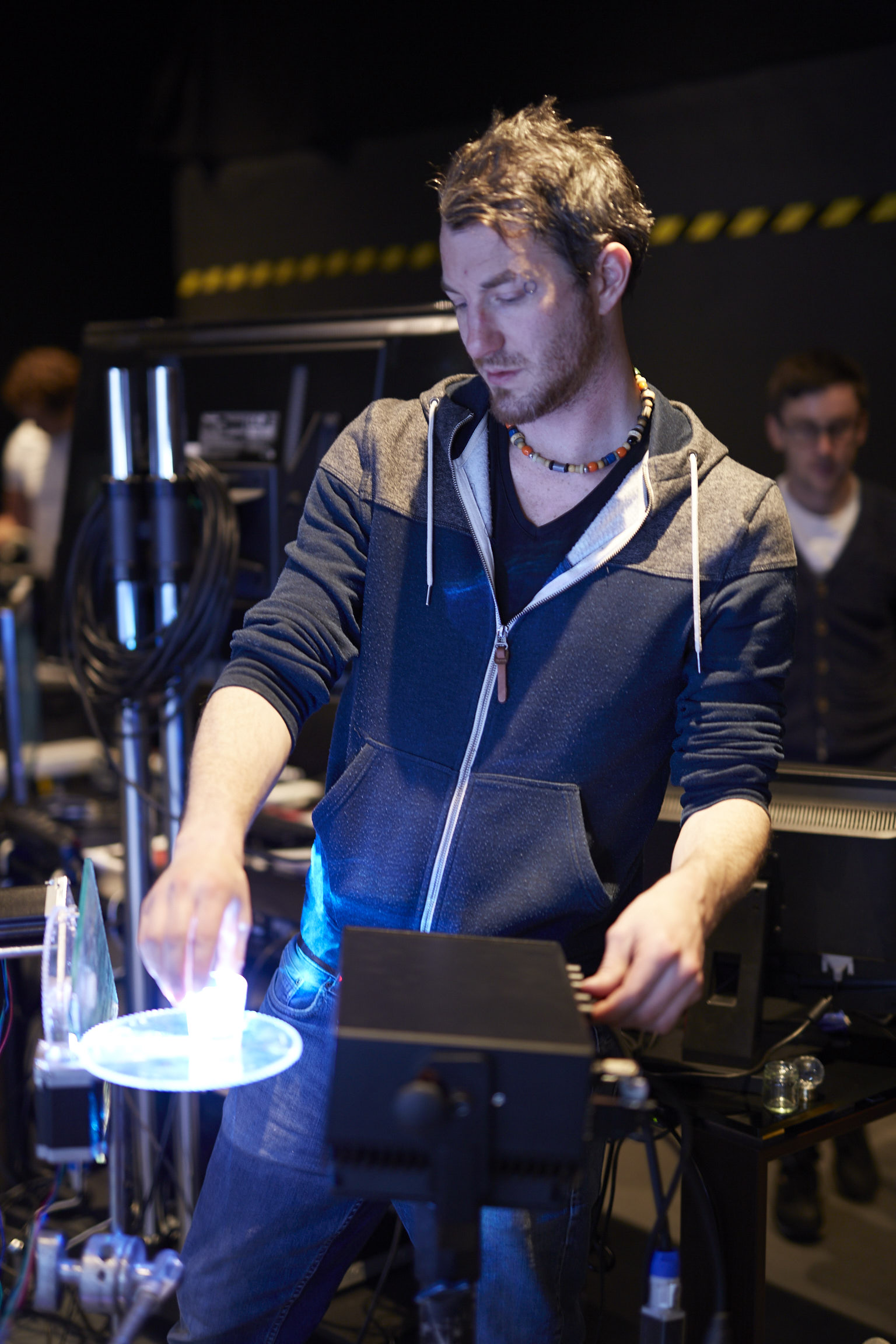 How did you get interested in this kind of technology?
Well, I do a lot of work with stage shows and have seen the effect it has on an audience. A lot is the music, but I try and amplify the meaning of music through lights and visuals. If you’ve been to a really amazing concert you know it’s something quite transcendental.

The personalised, biofeedback element is based on the On Your Wavelength project I did last year using an EEG headset by itself. You basically stood in this old railway tunnel in Southwark and controlled this big cone of laser light by trying to focus on one thought. We’re sort of trying to do the reverse here, using the light and sound to change the subject’s mental state, which is actually much harder. 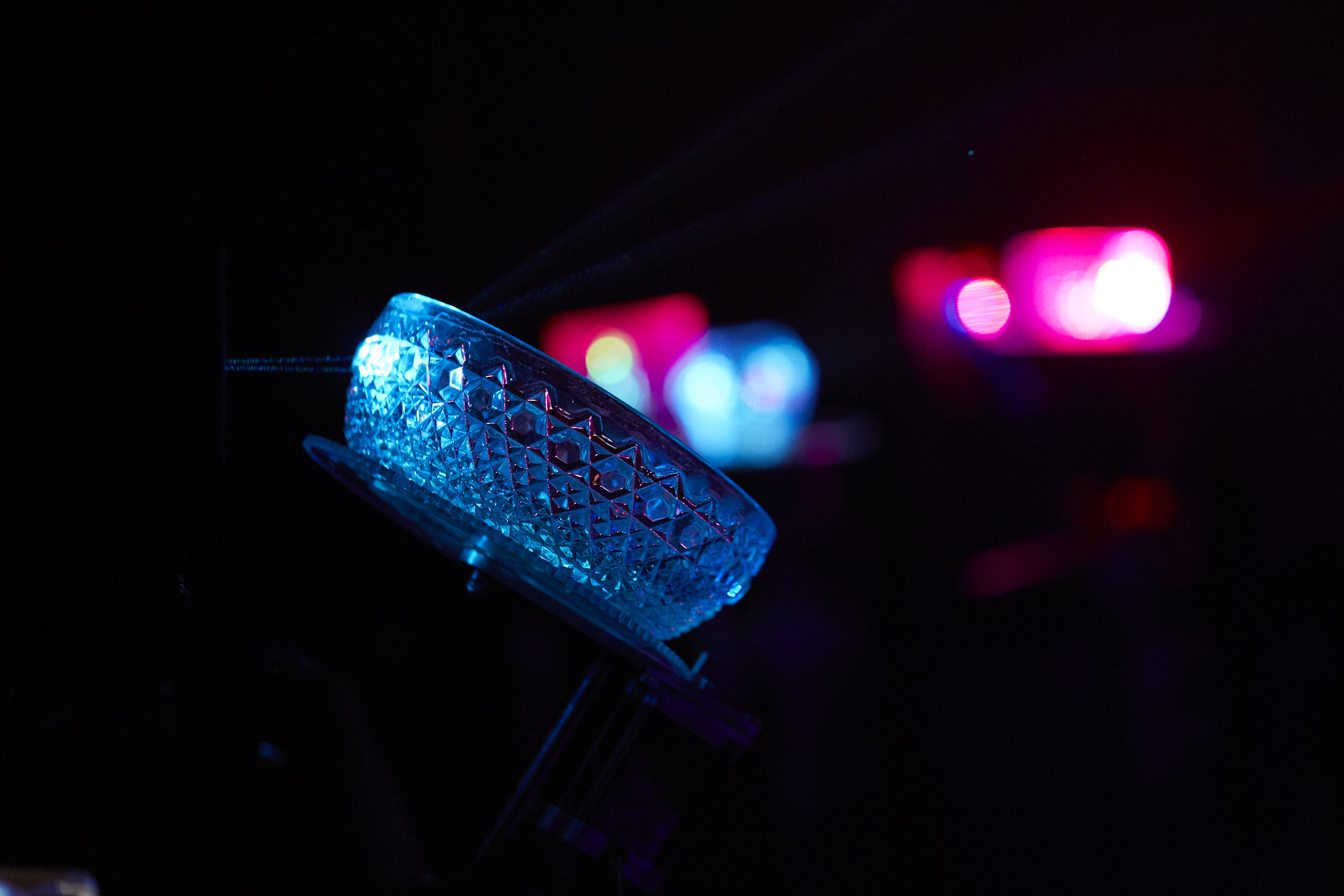 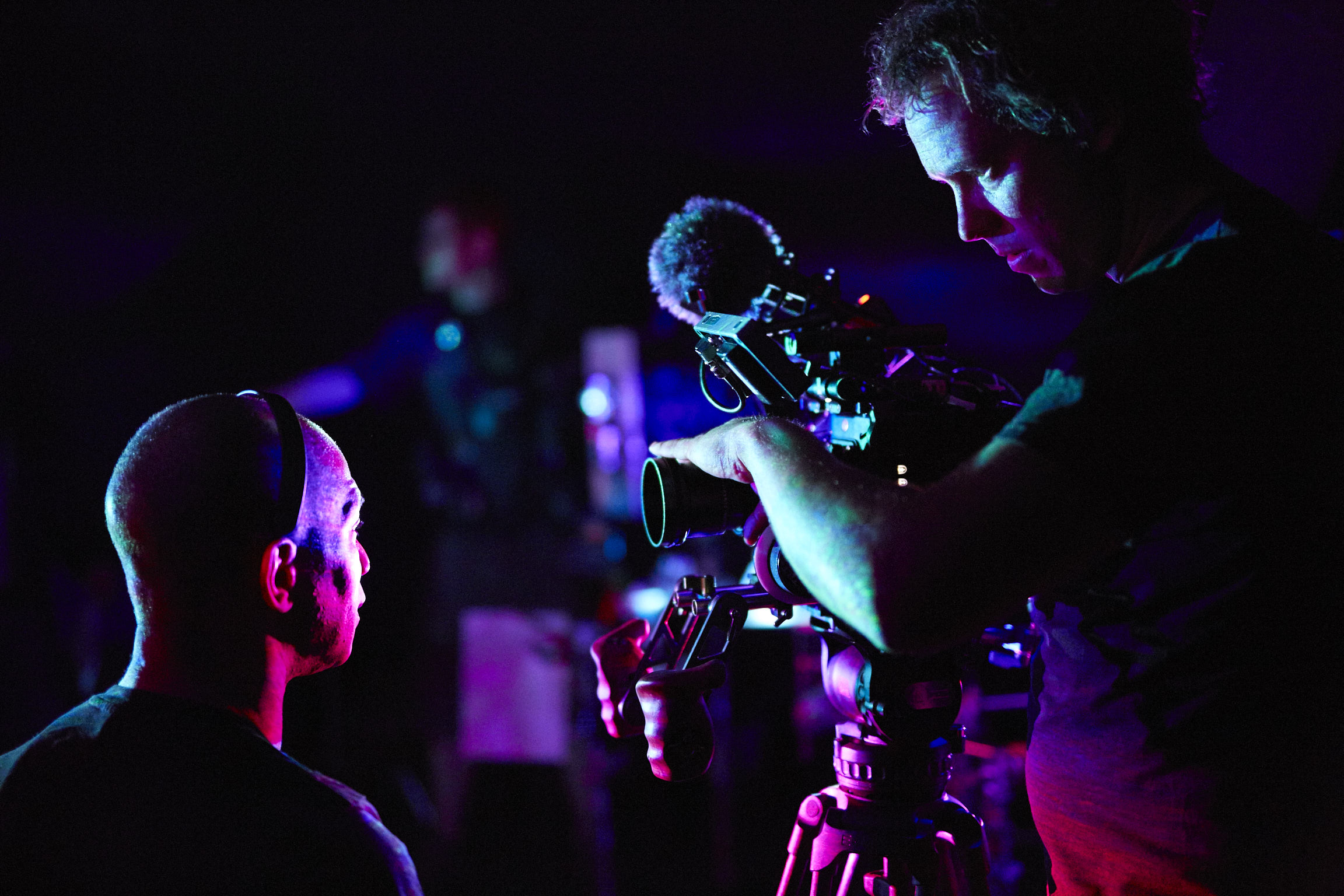 You’re working with MINI, so can we expect to see this kind of thing in cars in the near future?
Well, there’s talk of going out and getting with a design team to explore that, but it’s all very speculative at the moment. It’s not going to be in the 2018 model, put it that way.

This is early days. What you’re seeing here as my contribution to the Future Shapers project is a very early prototype. We’ve only spent a few weeks on it so far, so what you’re seeing is kind of a first stab to see what works. You’re hearing a soundtrack we think might be close to something relaxing. For the light composition I’m using very available materials, glassware from charity shops and things, so you get the vibe.

Maybe in 50 years you’ll be able to buy driverless cars that work like this. 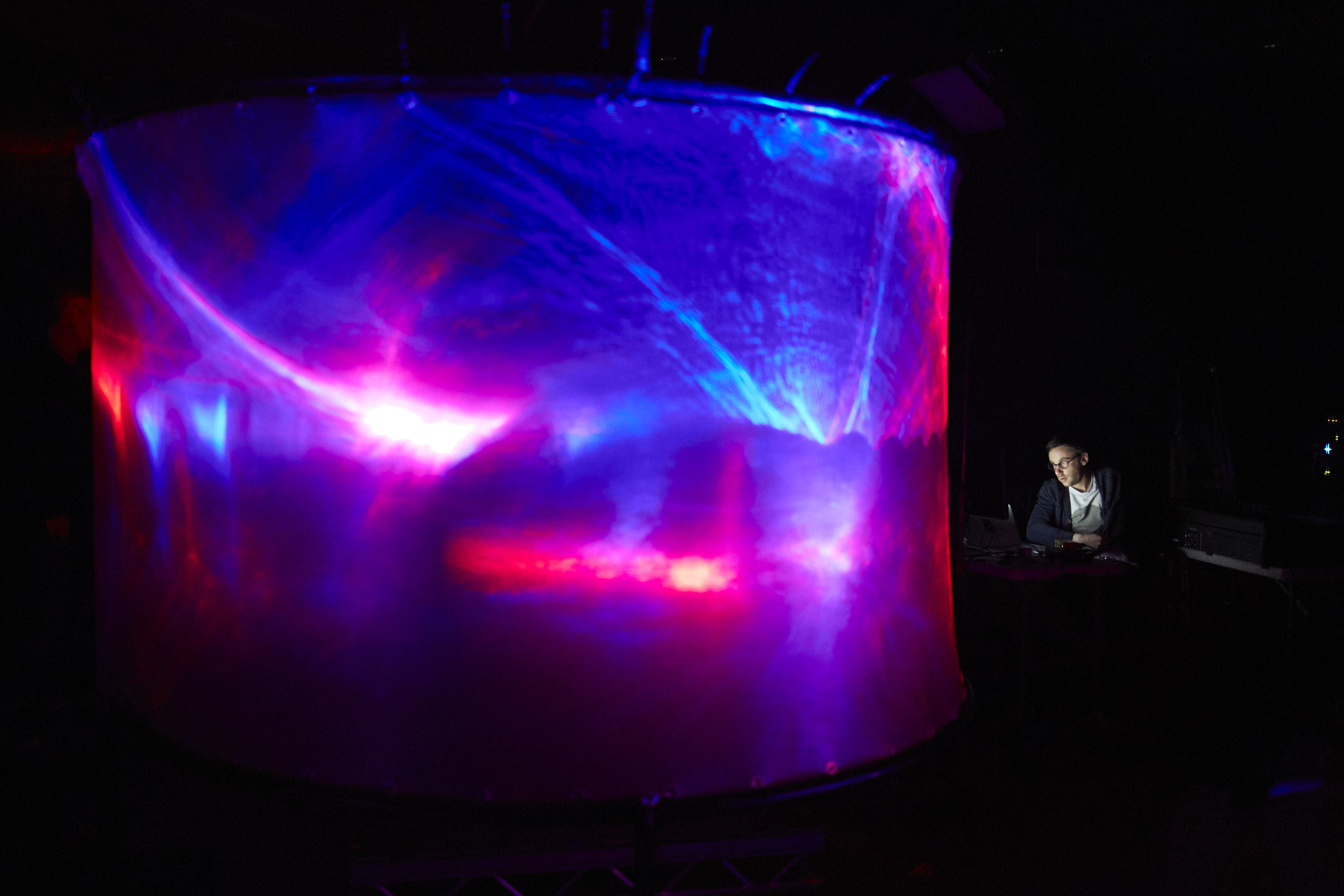 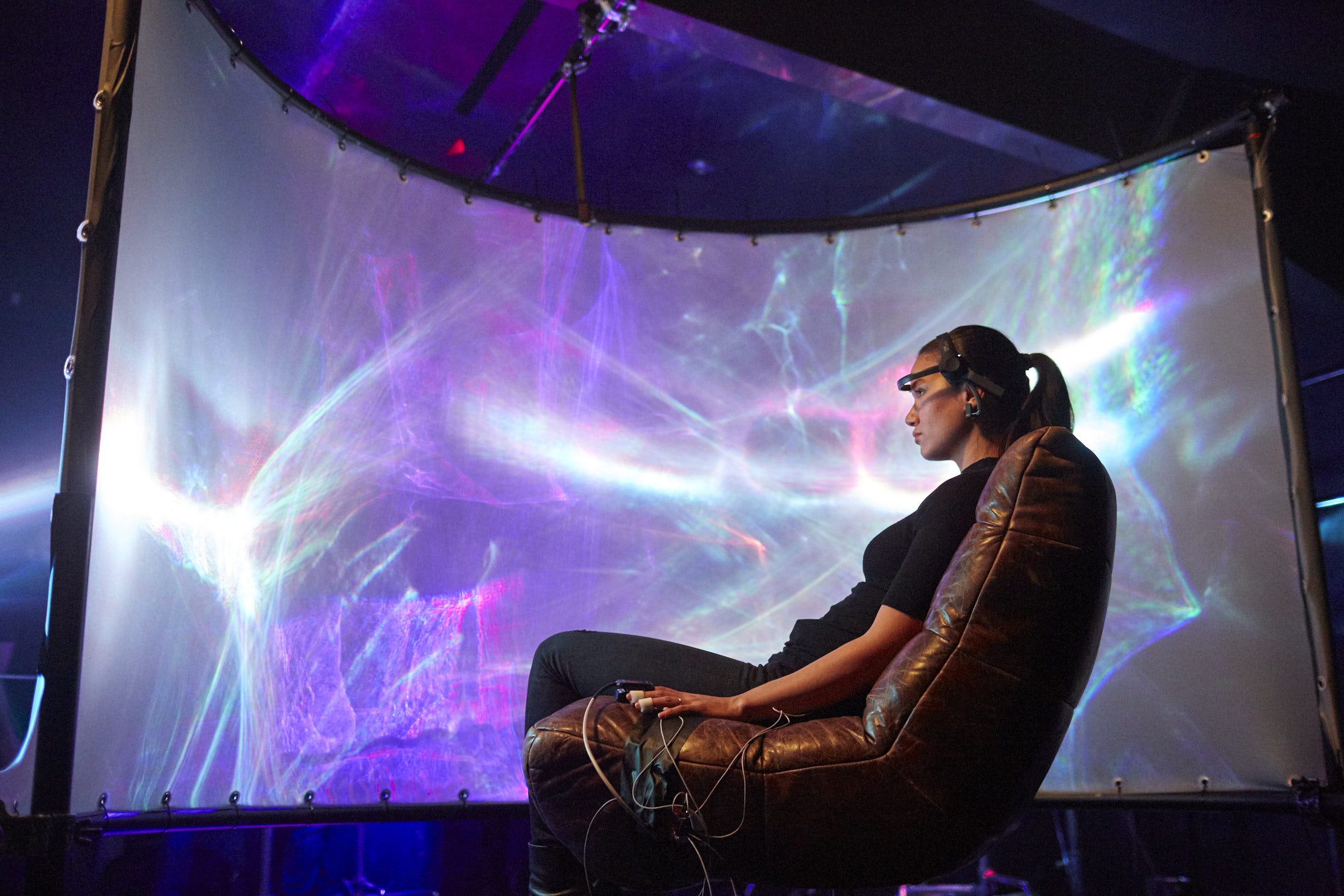 Do you often find that your fine art work also has commercial applications?
Yeah, and the other way round. When you’re trying to work with things like big lasers and whatnot, it really helps to have some experience working with them, which generally comes from commercial projects. It’s a real interplay between the two.

I’ve pretty much always done both at the same time. I do some projects that are a bit more commercial and other things that are more art based.

The BMW Group Future Experience Exhibition showcasing MINI’s vision of the NEXT 100 years will take place at the Roundhouse, London, from the 18th to the 26th of June. To win two VIP tickets to MINI’s invite-only event on June 20th, enter your details here.

Linkedin
RELATED ARTICLES
OTHER ARTICLES
Steel City is often overlooked when it comes to the country's cultural radar despite its role in shaping electronic music.
From the chip shops, to the bingo parlors and burlesque dancers, photographer Mike Coles remembers capturing scenes of holidaymakers by the English coast.
Last week, Tower Hamlets council removed its nudity-restricting licensing conditions in a huge win for London’s kink community.
A sharp increase in officers armed with the electrical weapon is resulting in serious injuries and deaths.
To mark the premiere of his new documentary on surfing giant Gerry Lopez, the filmmaker and former pro skateboarder sits down to share his unique brand of wisdom.
Photographer Bud Glick recounts documenting everyday life in the area, and what it taught him about the Chinese immigrant experience.