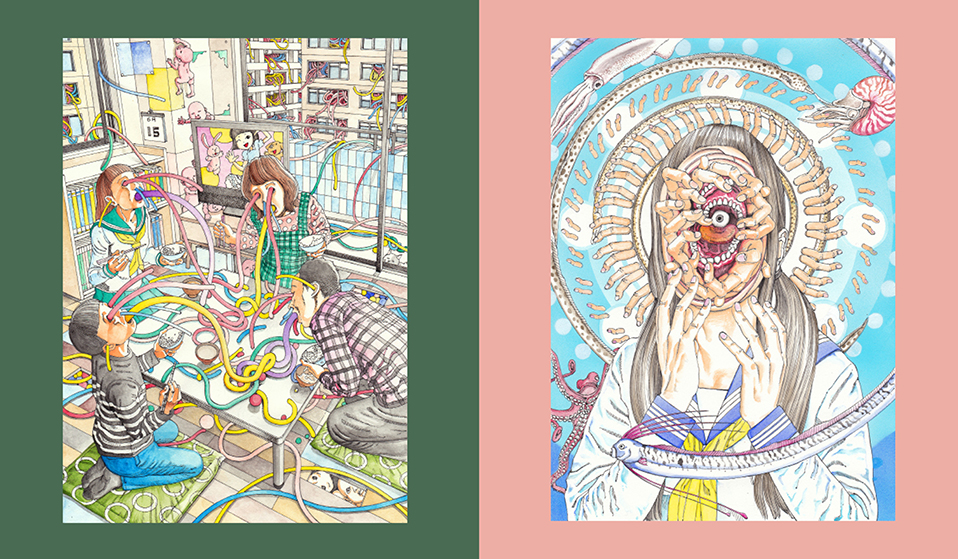 Shintaro Kago is a grandmaster of the grotesque: conjuring psychedelic illustrations that inspire as much awe as discomfort. As his cult following grows, he’s on a mission to keep surprising.

Shintaro Kago doesn’t really do interviews outside of Japan. The illustrator’s work has garnered a cult following around the world, celebrated for its distinct mix of horror, sci-fi and psychedelic erotica.

But when the 49-year-old agrees to take a call at home in Tokyo, the idea of talking about himself or his art causes clear discomfort. Little is known about his life and he speaks in halted sentences: one-line answers that convey an air of secrecy.

The path to this point started when, as a child, Shintaro would watch Monty Python reruns on TV (with Japanese voice-overs), nurturing a sense of humour that edged toward the surreal and absurd. “I would always find myself laughing at things that were taboo to laugh at,” he says. 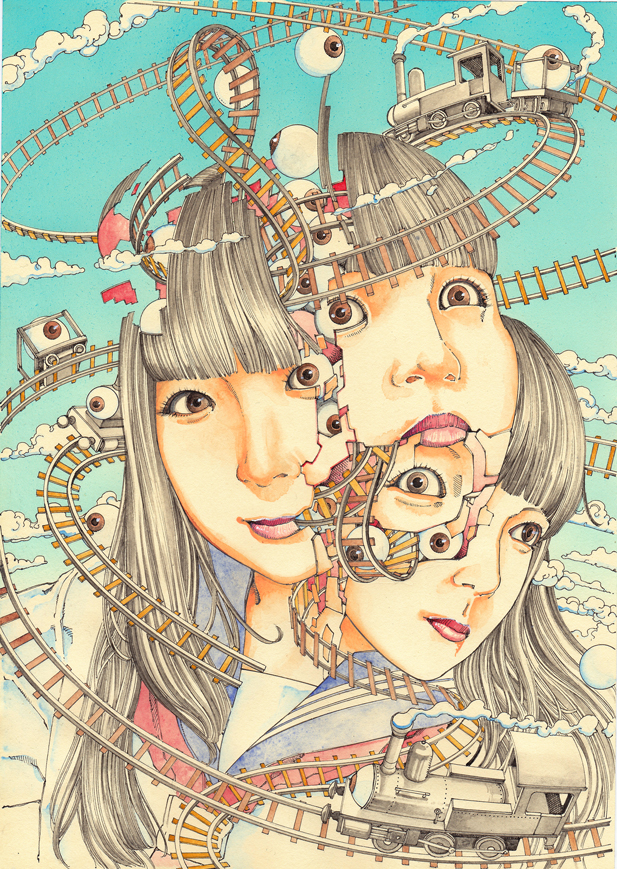 At the age of 12, Shintaro began to visualise what would become his trademark style. Although he dreamed of working as a film director, his ideas kept manifesting as illustrations. He joined the manga club at school and noticed another kid in the same grade whose comics seemed too wholesome for their own good. So Shintaro decided to go in the opposite direction, allowing his dark humour to come to the forefront. 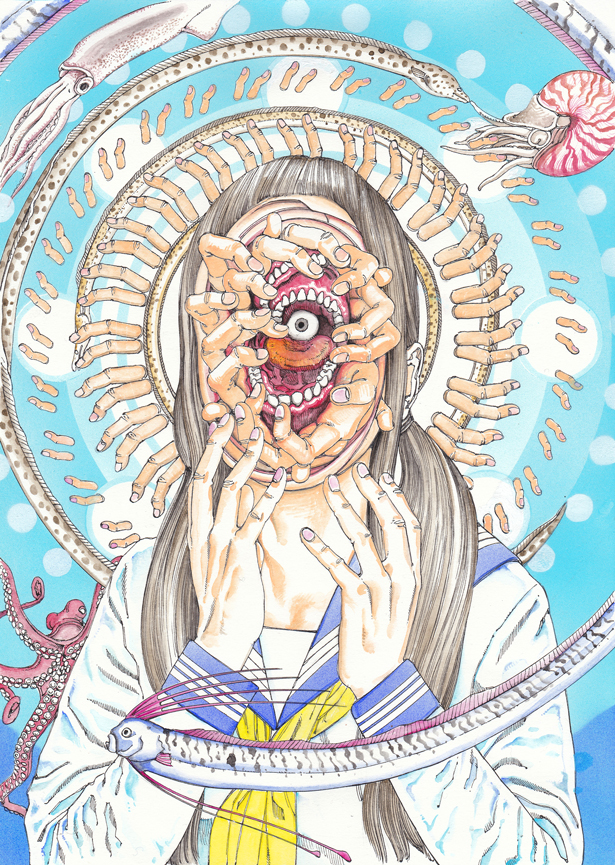 Shintaro didn’t go to art school. He believes you can develop a distinct style all on your own – and it didn’t take long for that attitude to pay off. He landed his first gig at Japanese manga magazine Comic Box at 19. In a society known for its conservative social values, however, that wasn’t such an easy route to take.

“Thirty years ago, there were some artists who drew influence from horror manga and caused scandals through their work,” he says. “There was a period where drawing horror manga became really tough… I’d been told to do myself a favour and stop drawing these kinds of pictures.”

Although raised in an artistic family – his father was an illustrator who specialised in oil painting with chromatic colours – Shintaro’s own work is not something he’s felt comfortable sharing with them, let alone discussing. “It’s too provocative,” he says hesitantly, before retreating into another uncomfortable silence. 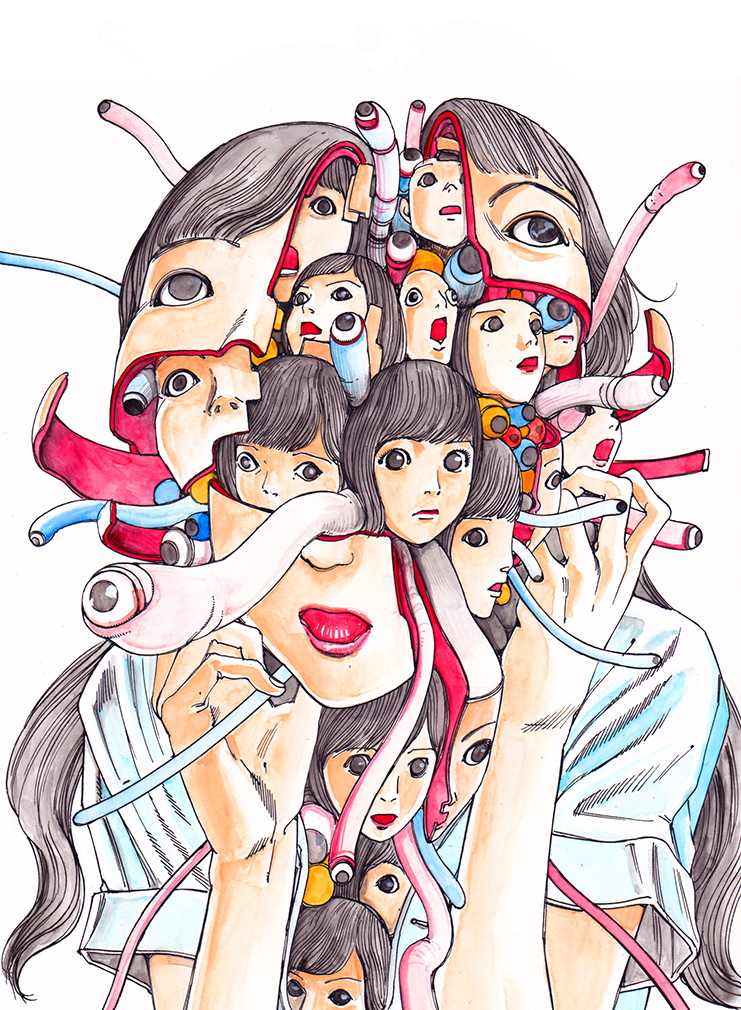 By now, Shintaro is used to backlash. He knows that pictures of creatively dissected brains and impossibly rendered limbs are not for everyone. Still, taking on commissions for niche titles effectively acts as protective buffer. When people respond with disgust, he almost treats it as a compliment… because that’s sort of the point. “These kinds of insults are not actually insulting at all.”

When you’re free to express whatever you want, he explains, it can actually become a hindrance; whereas when limits are imposed, somehow your expressive range becomes richer. Shock and outrage, Shintaro adds, only proves that he’s on the right track. “[You must] draw things that other people don’t normally do as much as possible.”

Originally, Shintaro explains, his art was aimed at Japanese audiences and he didn’t see it as being fit “for foreigners”. Yet the internet has expanded his audience in ways he never imagined, with demand on the rise in countries like Italy, France, Spain and Greece. 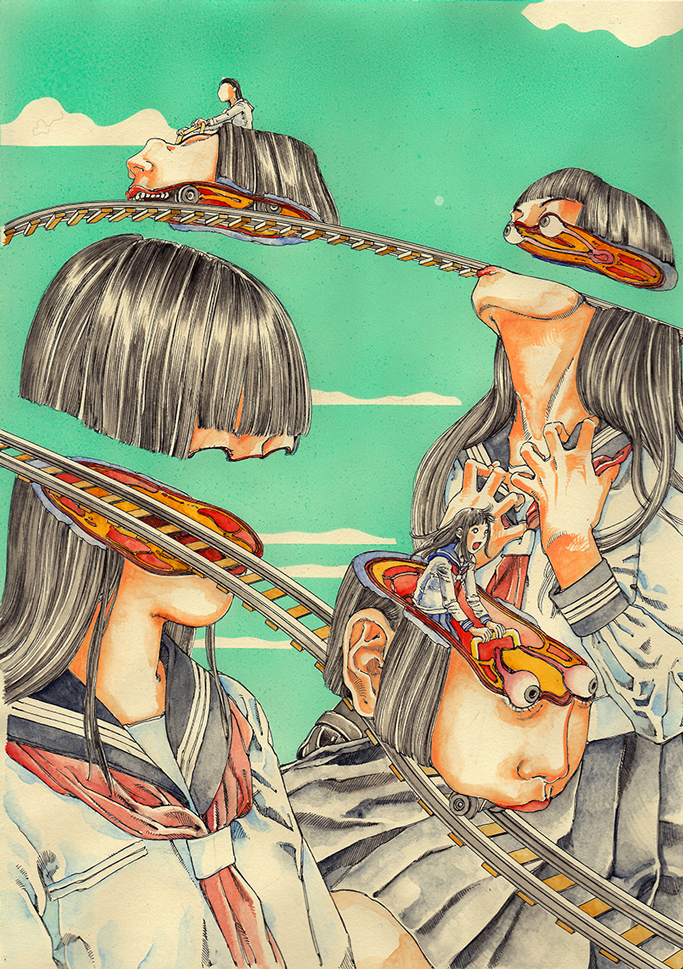 It also helped when Flying Lotus asked Shintaro to illustrate his 2014 album You’re Dead!, tapping into a macabre theme not just for the cover but each of the album’s 19 songs. “I heard that he had been following my art but at that time I didn’t know who he was,” he says. “I think it’s really interesting to be working with motifs that are absolutely loathed normally – it suits my style of work.”

Shintaro says that he doesn’t consider himself a successful artist, insisting that he still has a long way to go. Eventually he hopes to branch out into new frontiers, such as film and sculpture, but in the meantime he’s content just to keep surprising people.

“The best comment someone can say to me is if they saw a picture of mine, thought it was an amazing idea and wondered why on earth someone would draw such a thing,” he says cheerfully. “That would make me happy.”

Linkedin
RELATED ARTICLES
OTHER ARTICLES
For decades, an area of East London has served as a community hub for Vietnamese people looking for a taste of home.
In the latest instalment of Photographers in Conversation, the chronicler of raves, protests and beyond explains why he’s drawn to such specifically visceral environments.
Photographer David Hoffman recalls documenting the extreme wealth inequality around Tower Hamlets and Hackney int the 1980s.
The last few years have seen an increase in LGBTQ-led initiatives to feed the hungry, with many finding ways to stay afloat despite the challenges.
Proposals to introduce a minimum GCSE threshold for student loans will disproportionately affect those from marginalised backgrounds.
Photographer Matthew Brookes recalls following a group of young people in Venice Beach living in search of the perfect wave.