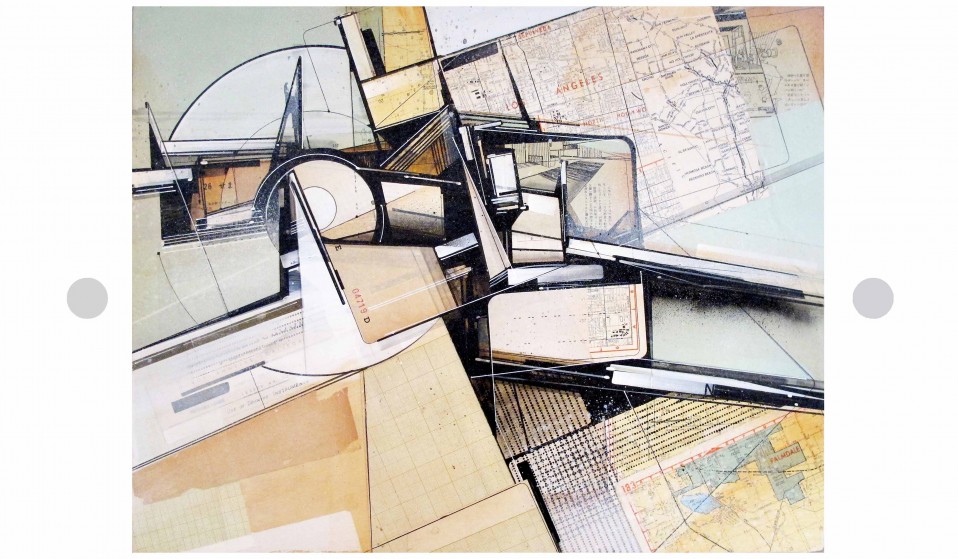 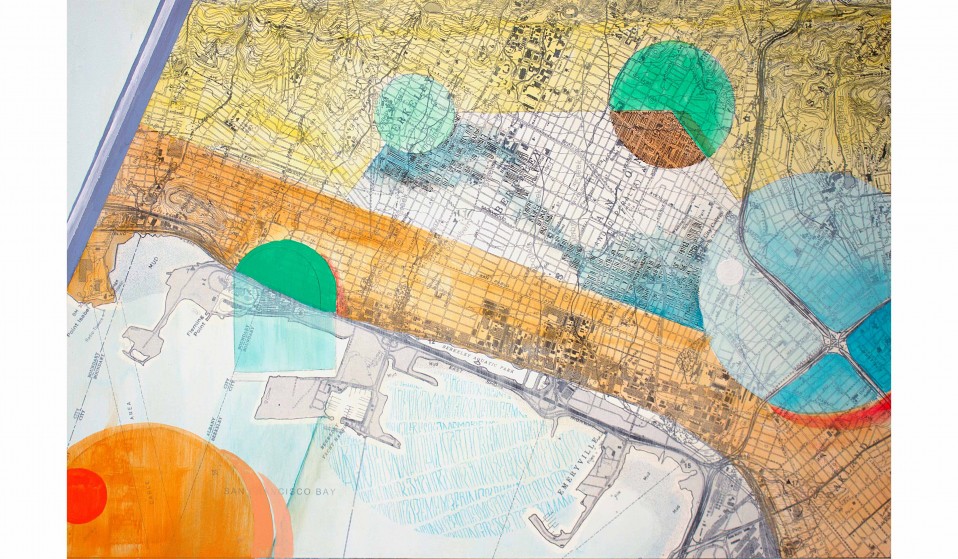 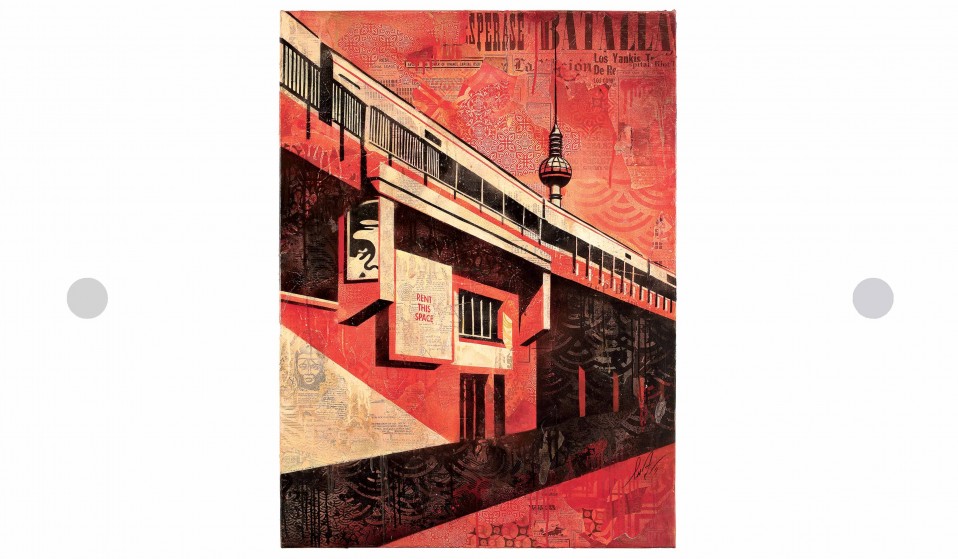 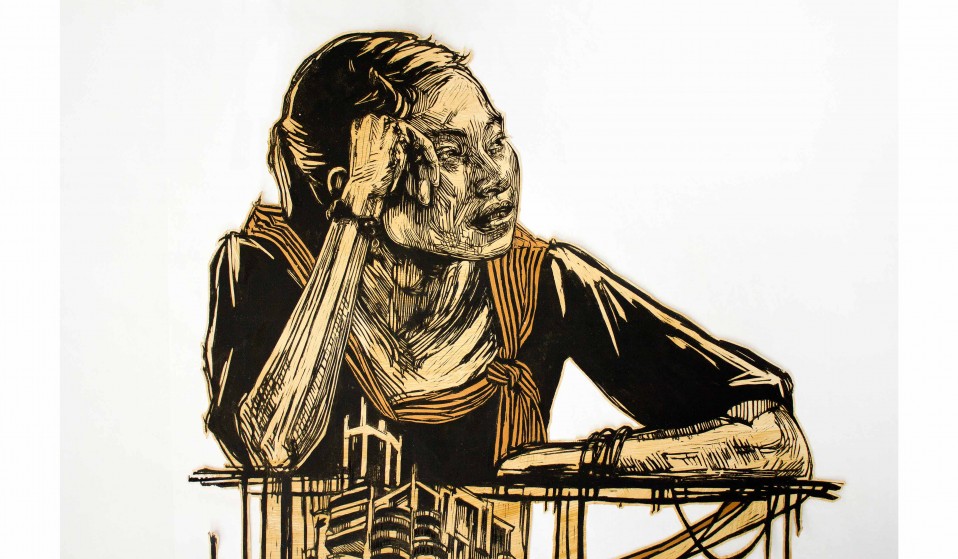 Conventional maps seek to rationalise, define and control our metropolises. Through maps we see our streets as uniform, inert and impersonal. But our lived experiences of urban spaces couldn’t be more different— when was the last time your city looked the same hour to hour, let alone week to week? Of course, these maps do serve a purpose, helping us get from A to B. They are efficient and functional and they expect our streets to behave in the same way.

It is precisely this attitude to urban space that Rafael Schacter, creative director of Approved by Pablo, hopes to challenge with Mapping the City, which opened recently at Somerset House under his curation. The show brings together fifty different works of art, the large majority of them especially commissioned, from a global cacophony of street and graffiti artists. But this is not an exhibition of street art. “This isn’t graffiti art, this isn’t street art, it’s something that as yet hasn’t really got a name apart from just art,” Rafael explains. “The important thing that we’re presenting here is work by street artists or by graffiti artists.” 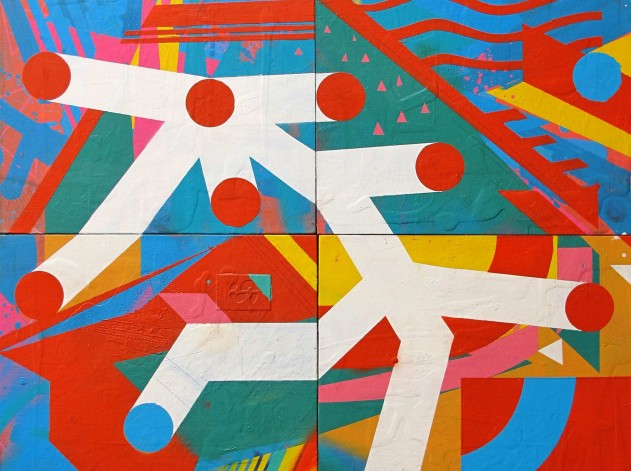 The distinction here is crucial as this group of artists is unique in its ability to communicate ideas about our cities in a way that no one else can. “All the artists that are in the show, and graffiti and street artists in general, have an appreciation of space that is one step removed from the rest of us,” Rafael says. “Most people use the street as a site of transit, not a site to inhabit, whereas these artists are immersed in the street every day. So what we want to try and do is get their appreciation of space into an object.”

What results is a vibrant melee of works that destroy our typical notions of the way maps define our cities. Mapping the City sees cartography stretched beyond its rigid limits and into collages, paintings, cement sandcastles, a tepee, a cloak and other objects that play with our sense of space and highlight the subjectivity that we bring to our interactions with our environments. Rafael shows me two pieces by Italian artist 108, for example, that depict the city of Alessandria by day and by night. “When you see his city presented in this way it’s like yeah, of course!” Rafael enthuses. “The way we visualise space is radically different from moment to moment. Just in 24 hours, think about the way space looks and feels at night time compared to how it looks and feels in the day. It’s a totally different way of understanding space, so why should it look the same on a map?”

Other pieces play with the physicality of mapping: American artist Brad Downey finds faces in the contours of traditional maps while French collective Les Frères Ripoulain mapped the city of Rennes by only plotting the abandoned spaces that are the sites of their street art and graffiti. Other pieces take a more abstract approach. Experimental graffiti artist Eltono exhibits a sculpture made out of the shapes of twelve aimless walks he took in Beijing, his ‘map’ of the city shaped only by his strolling experiences. Momo, an American artist, plays with traditional ideas of graffiti by writing an 11-mile long tag across Manhattan using a paint-dripping contraption attached to his bike. The only way for us to fully experience the piece is when it’s drawn on a map, producing a brilliant subversion of the map’s attempt to portray a clean and impersonal city. 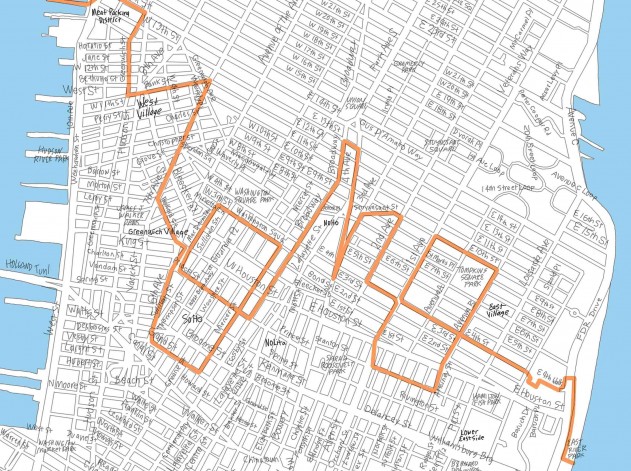 Beyond the creative and cartographic experimentation at play, Mapping the City also provides a vital space for critique and debate about the state of cities today. As London continues to haemorrhage public spaces and replace them with privatised spaces such as the dystopic Garden Bridge, Mapping the City channels a voice of dissent, a vision of urban space that does not revolve around consumption or transit but creativity and community. For Rafael this is one of his main concerns surrounding the exhibition. “I am personally extremely concerned with the direction London is going in. While researching for my book I travelled all across Southern Europe, Latin America, the States, with these artists and the way they use space was a total revelation to me,” he says. “It was for inhabiting, it was for living, it was for creating, it was for doing. Your entire life took place there, and it was acceptable and they made it acceptable. They would argue with police about where they can and can’t paint and they would discuss with passers-by what they were doing and that was a real revelation to me.”

“So the idea behind this exhibition is saying let’s look at our cities in a different way,” he explains. “Let’s not just see them as a place for a Starbucks, as a place for consumption, as a place where if you’re not consuming you’re doing something wrong. A lot of the artists who came to the launch were looking at London and asking, ‘Where are the benches? Where are the people congregating? Where is the life?’ And I was like, yeah it’s not here. So what we really want with the exhibition is for visitors to leave here and hopefully have a different way of looking at their own city.”

Mapping the City is free and runs at Somerset House until February 15.

Linkedin
RELATED ARTICLES
OTHER ARTICLES
After building his reputation covering the US civil rights movement in the 1960s, the photographer went on to produce some of the most enduring images of the past century.
Activists and campaigners are fighting back against new laws that would seriously undermine the ability to take industrial action, calling it an attack on fundamental workers' rights.
Taking us through one of the most dynamic years in recent history, Laylah Amatullah Barrayn new photo book contains tender yet confrontational portraits.
After blocking the Scottish government’s gender recognition reform bill, Westminster is now devising further changes to the law to make it harder for trans people to self-identify.
Mass crustacean die-offs in the North East have led a community of fishermen to take action to save their seas.
After fleeing the war in Ukraine, people are finding it impossible to secure affordable and decent housing in the UK.