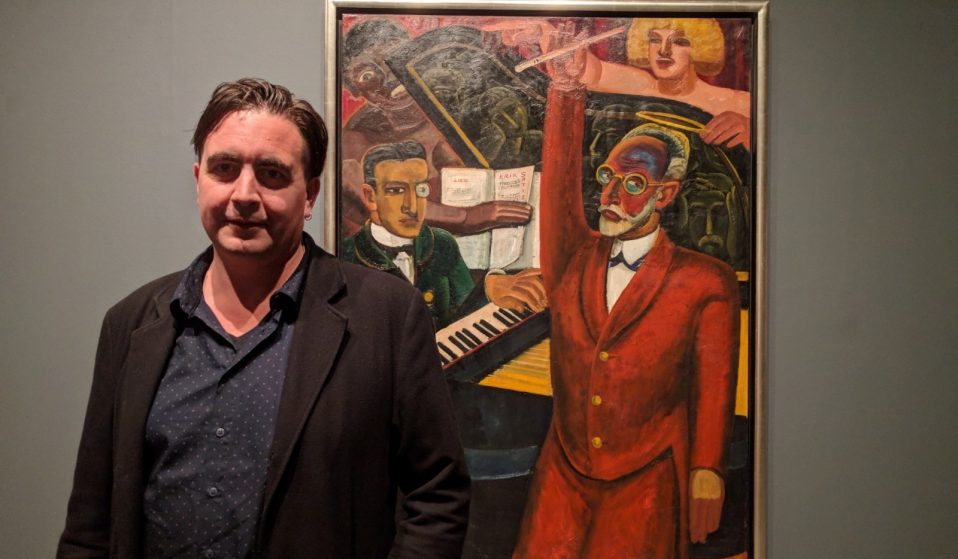 After a seven-year break, the art-punk band are back. We take lead singer Eddie Argos on a trip around a modern art gallery to talk Brexit, pig sex and morphine.

After a seven-year break, the art-punk band are back. We take lead singer Eddie Argos on a trip around a modern art gallery to talk Brexit, pig sex and morphine.

Art Brut were never meant to be an art band, believe it or not. The name was chosen when singer Eddie Argos paid a visit to the Musée d’Art Naïf (or museum of naive art) in Montmartre, Paris, and became overly enthusiastic about the mise-en-scène of splotchy, wild, untrained “raw art” and carousels made of record players. Argos, as we’ll see, makes a habit of being overenthusiastic about works of art.

Argos is telling me all this while reclining on the 8th floor of the Blavatnik Building in the Tate Modern, sipping a cappuccino. He’s due to play a sold-out show at the Boston Arms in London the following night we meet, and has flown in early from his home in Berlin to speak to Huck.

As it seems thematically appropriate, we visit the Magic Realism: Art In Weimar Germany exhibition to view works by Otto Dix, Jeanne Mammen and George Grosz, among others.

1919 to 1933 was a period of unrestrained artistic freedom that was curtailed by Hitler’s crackdown on what he called “degenerate art.” To draw parallels between now and then might be pushing it, though Argos mentions that he now lives in Pankow, the one part of Berlin where the AfD have a representative in the Bundestag. It’s the kind of information that would have been unthinkable not so long ago, but now just elicits a shrug of the shoulders.

It’s been seven years since Art Brut last released an album. A great deal has happened to Argos in that time, both good and bad. The good: the birth of his son Jake, who is now old enough to ask him “why” (or “warum” in German) every time he opens his mouth (Eddie jokes that it’s like he’s fathered a music journalist).

The bad: he got diverticulitis and nearly died in a German hospital of peritonitis in 2015. Thankfully, he lived to fight another day; and all of these ups and downs are documented on Wham! Bang! Pow! Let’s Rock Out!, the band’s fifth studio album.

“I was joking with [the album’s producer] Jim Moray, saying it’s a concept album about a man who moves to Berlin with one girlfriend, breaks up with her, meets someone else, falls in love, has a baby… hang on a minute, that’s not a concept album, it’s just what I’ve done over the last few years.” 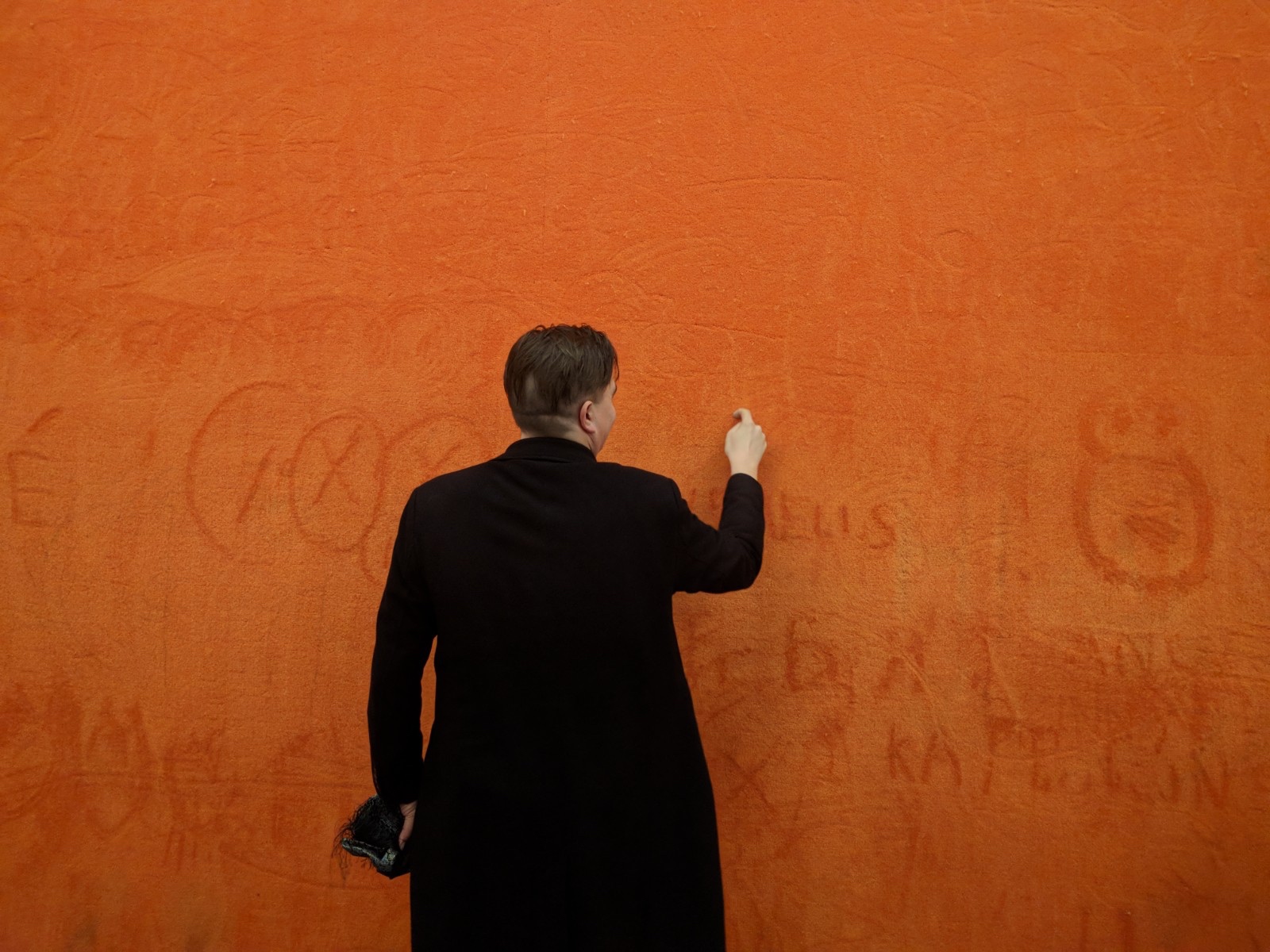 So Eddie, a question. Modern art, postmodern art or post-postmodern art. Which one makes you want to rock out the most?
All art. All of it. Our song ‘Modern Art’ is about an experience that happened right here when I was with [early Art Brut guitarist and songwriter] Chris Chinchilla. I got really excited and started shouting – because I get quite excited – and then the man came over and told me off. I was enthusing, I wasn’t rocking out. And then I went to the Pompidou in Paris the next week and I was doing the same thing but nobody told me off.

You didn’t run at any art, like in the song?
I didn’t run at it, no; that’s an exaggeration. I was more: ‘Look how wonderful this is! That’s amazing. Look at that blue! Grapes!’

Do you get to see much modern art in Berlin?
The Hamburger Bahnhof is a nice gallery in Berlin. I went there with Frank Black from the Pixies when he was in town. Weird walking around a gallery with him. He really likes art but he’d never heard of Gilbert and George. He knows all sorts of things about art that I didn’t know, but when we came to them he was like, ‘Who are Gilbert and George?’ Maybe they’re more widely known in the UK, I don’t know.

Have you been to the Brücke-Museum? David Bowie and Iggy Pop went there a lot and they became obsessed with an Erich Heckel painting which they both then imitated on The Idiot and ‘Heroes.’ Are you a Bowie fan, actually?
A bit, yeah, but I’ve not been to the museum. I went to the David Bowie is… exhibition in Berlin. I took Jake who was only three at the time, and even though he didn’t know David Bowie he was fixated by all of it. A three-year-old in his pushchair freaking out at David Bowie – it was cool.

There’s a great energy to the new record. Did you feel invigorated after becoming so ill?
I had been ill for years and didn’t realise. I was like, ‘This flu is killing me, I’ve had it for eight months now.’ And people were like, ‘You don’t have flu for eight months.’ So I went to the doctors. I had diverticulitis – it’s gross. Things get stuck in your bowel, it perforates and goes bleugh. And mine was broken and it was hanging together by a thread. Because I don’t speak German I didn’t realise how bad it was. People were hugging me the next day after I’d been in surgery for an extra five hours or something. Had I been at home and it had broken, then I’d be dead.

It doesn’t sound like the best of experiences.
In the German hospital, there were six people in the room and they were shaving my pubes in front of people. I was like, ‘Come on lads, a bit of privacy!’ They were sticking stuff up my bum; at least put a blanket over me before flipping me over. Also, there was a weird old man – dunno what he was in for, but he was massive. I wasn’t allowed to eat for a month – I was on these weird milkshakes – but he was eating all the time. Literally, he’d be lying in bed eating 24 hours a day. I’d wake up at three am and he’d be eating a pickle and looking at me. It was like a Steve Martin and John Candy film, but he wasn’t this lovable man, he was a guy eating pickles and looking at me for a month.

At least you were bombed out on morphine the whole time.
I didn’t really like the morphine. There’s that kids’ TV show In The Night Garden; the Iggle Piggle music kept going around in my head every time I took the morphine tablet. Around the same time, there was that news that David Cameron had apparently fucked a pig’s head. I’d just come out of surgery and I thought I’d hallucinated that too. 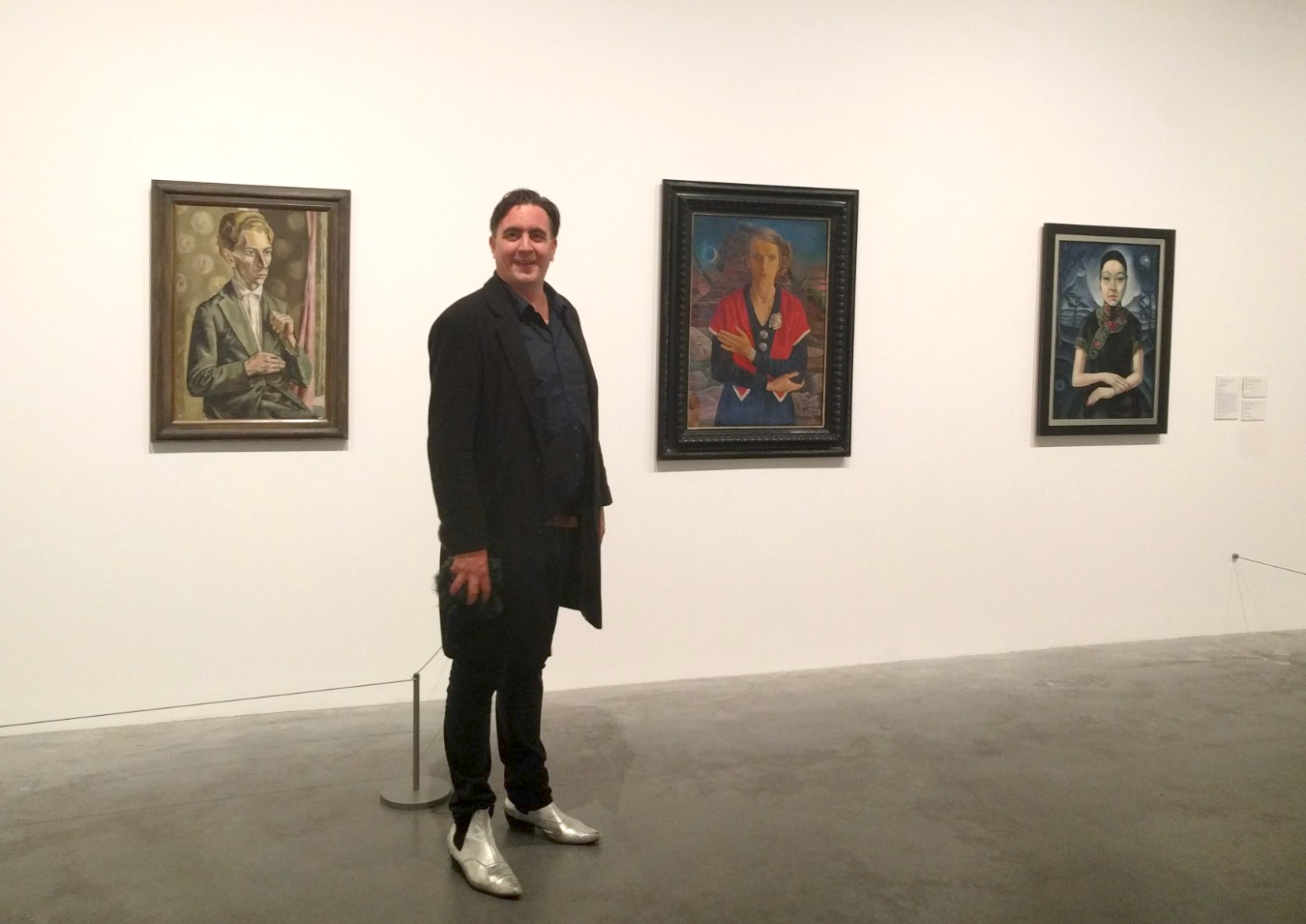 I love the song ‘Hospital’. The lyrics about stripping the beds and burning the sheets and the defiant refrain of “I’m not returning” made me want to punch the air.
It was the worst time of my life and I was thinking, whatever happens, I’m never coming back here again. Being tired all the time, sweating all the time, being in pain… I was drinking Lemsip for six months. All of a sudden I could see in colour again.

Did you get any perspective regarding your own mortality?
A little bit, when I got home and things settled down. I’m quite bad; I always work out what happened a bit later. My life’s viewed through hindsight.

Speaking of hindsight, are there any lyrics you’ve written over the last 15 years that you wouldn’t necessarily write now in these more sensitive times?
The only lyric that I do feel bad about sometimes is ‘Good Weekend.’ At one point I say, ‘I want to bend her and fold her.’ It sounds a bit inappropriate, but it was meant in a nice way.

Would you write the lyric about wanting to write the song to make Israel and Palestine get along now?
I think I would write that again. I wish I could do it.

As an Anglo-German band, you’re kind of the poster children for the EU, aren’t you?
We’ve got a French name and most of us are living in Germany. Brexit is horrible, isn’t it? And to see family members go wrong on Facebook. It’s terrible, realising these people you admired are idiots. I don’t want to say that, I love my family, but it’s like ‘What are you doing?’ I had friends in America who turned out to be Trumpists. I blocked them. Just cut them out, I think.

Living in a bubble has a lot to recommend it…
People want to debate. I’m not debating that; that doesn’t deserve debate. I didn’t need to qualify with debate that you hate certain people for certain reasons. You’re an idiot.

Do you think you’ll stay in Berlin?
I like it a lot. I moved there originally because it was cheap. My flat was 350 euros or something when I moved there eight years ago. But now I love it. It’s a bit annoying with all the tech bros trying to come in but it’s still a really nice, interesting, friendly city. In London, you see suits getting on the train all the time. But you don’t see that in Berlin as the whole banking industry is in Frankfurt. So it feels a bit less like that sort of city.

Is it scary that Angela Merkel is on the way out?
I don’t agree with a lot of her politics but I love the fact she was so compassionate towards refugees. I feel proud being almost a German because of that. Fair play, Angela Merkel. On lots of others things, she’s still quite to the right.

Is it good to be back after all this time?
I’m a bit nervous about playing tomorrow. We played in Madrid recently, which was our first time back. I was a bit nervous then but I soon started acting the prick again.

Learn more about what Art Brut are up to, and see upcoming tour dates, on their official website.

Linkedin
RELATED ARTICLES
OTHER ARTICLES
Jermain Cikic reflects on his experience of visiting the island of Samos, Greece, in the summer of 2021.
Photographer Alice Mann reflects on capturing the camaraderie and discipline it takes to succeed in a highly-competitive sport.
Photographer Melanie Nissen recalls capturing the characters, fashions and rarefied chaos of a rapidly-expanding set of punk bands who helped to redefine the genre.
In the UK, Hongkongers are continuing to stand in solidarity with the pro-democracy movement.
Those set to be impacted by the governments ’undemocratic’ bill explain why it risks silencing them.
Photographer Yan Morvan revisits a radical moment in history, which saw the emergence of a fiercely-rebellious spirit among the UK‘s youth.