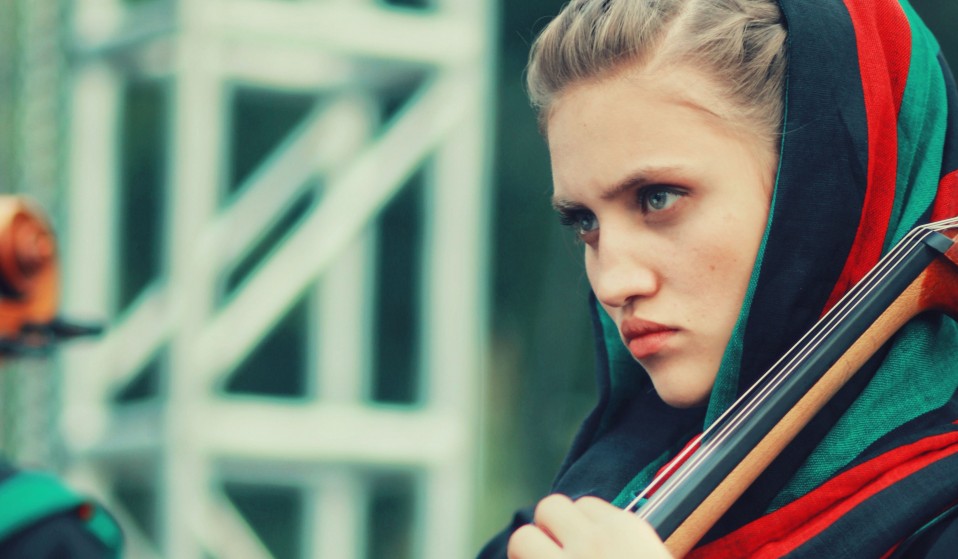 Zohra is the first ever all-female music ensemble in Afghanistan’s history, with its members facing death threats and family rejection just for doing what they love. Writer Kat Lister hears their incredible story.

Zohra is the first ever all-female music ensemble in Afghanistan’s history, with its members facing death threats and family rejection just for doing what they love. Writer Kat Lister hears their incredible story.

When Negin told her family she wanted to study music, it wrenched her away from everything she knew. “They said that I was a bad girl and told me not to play,” the 20-year-old tells me from her school in Kabul. Despite support from her father, she didn’t see her village in the northeastern district of Kunar for years. Her uncles and aunts forbade her from returning home; she wasn’t their niece anymore. “I lost every member of my family, except my father,” Negin says matter-of-factly. “It was so hard for me, but I love music so I am continuing this way.” There’s a pause before her voice sparkles with life. “Music is my dream,” she adds.

It’s lunchtime in Afghanistan’s bustling capital and at the National Institute of Music (ANIM), two young pupils are Skyping me (in perfect English) about the hurdles they’re conquering to play the music they love. Negin and 19-year-old Nazira have sacrificed everything to join Zohra – an Afghan Women’s Orchestra that, earlier this year, defied death threats to perform in front of global leaders at the World Economic Forum at Davos.

What makes Zohra so special? It’s the first ever all-female ensemble in Afghanistan’s history. Because of this, the difficulties they face are unique. In a country that’s struggling to reform itself as the Taliban gain ground again, women are still fighting for autonomy over their lives. Neither Negin or Nazira are naïve about the scale of their endeavour, the dangers that they face – or what it signifies for other women with dreams of their own in Afghanistan. “We’ve got to work hard for the future so that other girls can go to school, too,” they tell me. 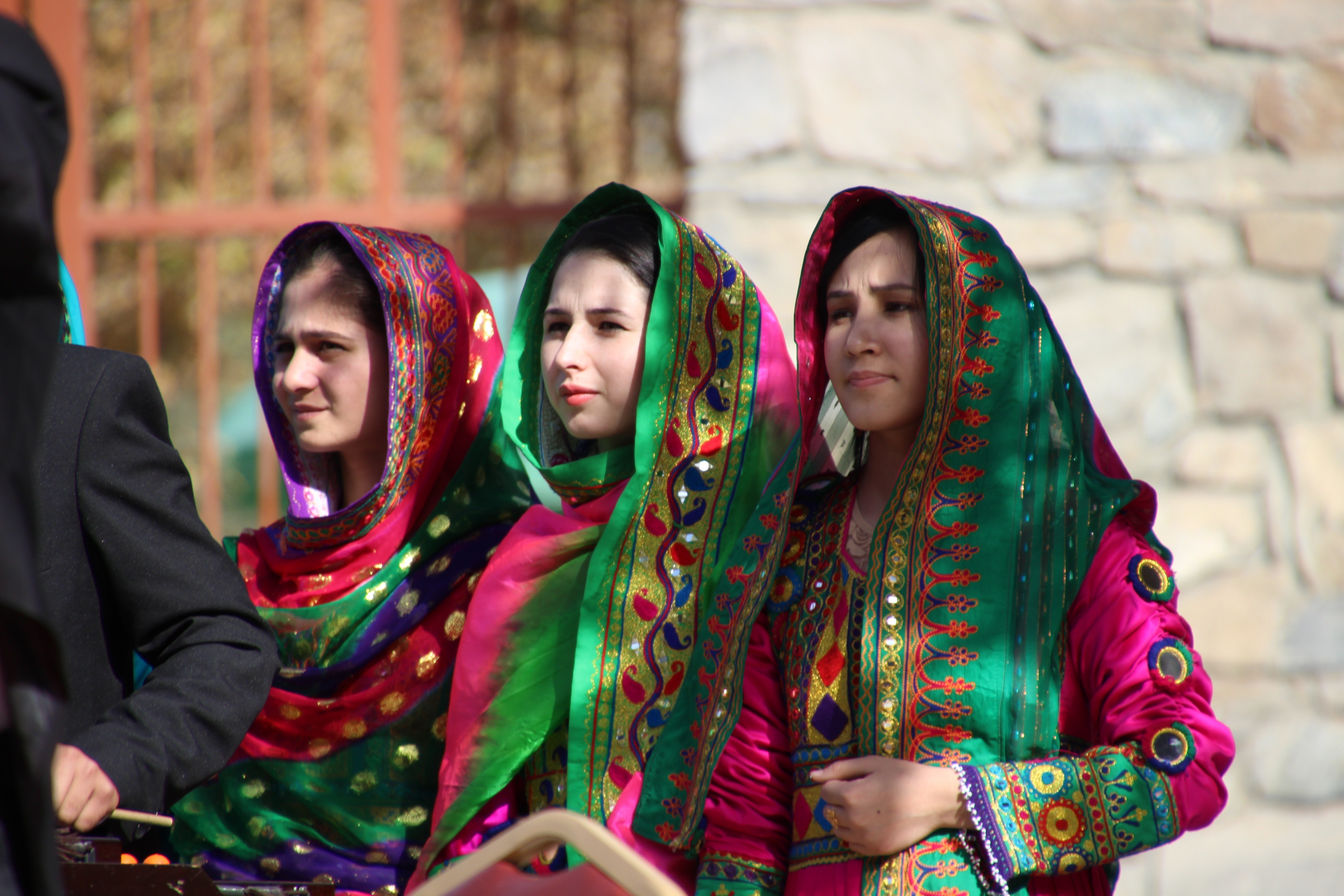 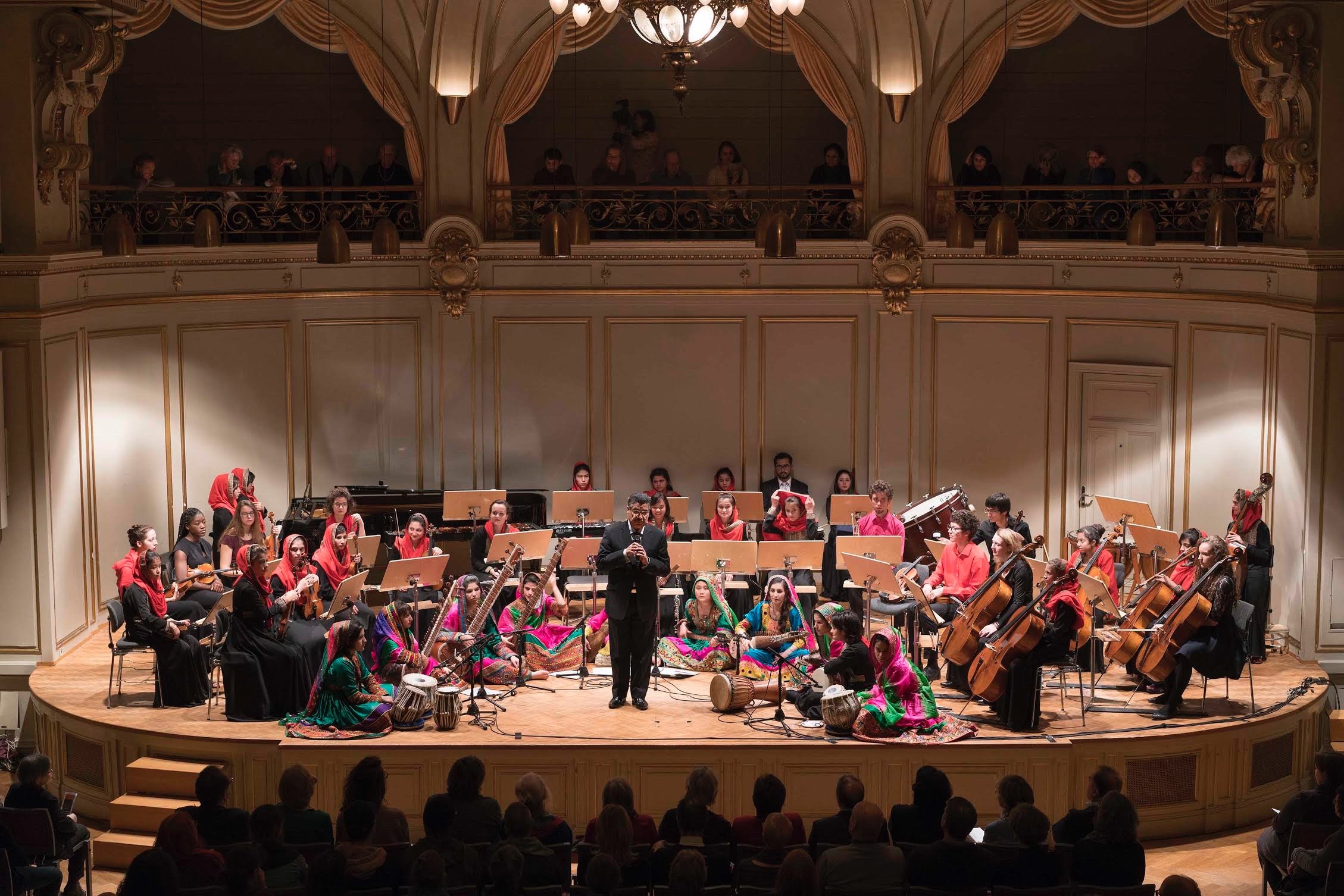 Despite their struggles, Negin and Nazira are the lucky ones. According to UNICEF, Afghanistan has one of the highest rates of out-of-school girls in the world at a staggering 55 per cent; and as Taliban and government forces continue to fight over sovereignty, violence against women and girls still persists in alarming numbers. Intersecting with these issues is another major stumbling block: up until the Taliban was defeated in 2001, music was banned. Despite the lift, damaging attitudes towards the art form still prevail.

Nazira and Negin tell me that the Mullahs (senior Islamic clerics) make things difficult for them, accusing music of being “haram” – an Islamic term meaning “forbidden.” In the rural villages that both women grew up in, neighbours regularly called them “bad girls” for playing their instruments. “They said, ‘why are you playing music? You’re a girl. You should stay home and clean,’” Negin says.

“The Taliban brainwashed a generation,” ANIM’s Director Dr. Ahmad Sarmast tells me after the girls run back to their classes. Their legacy lingers. In provinces outside of major cities such as Kabul, where levels of illiteracy are high, religious authorities – such as the Mullahs – still maintain their influence and power. 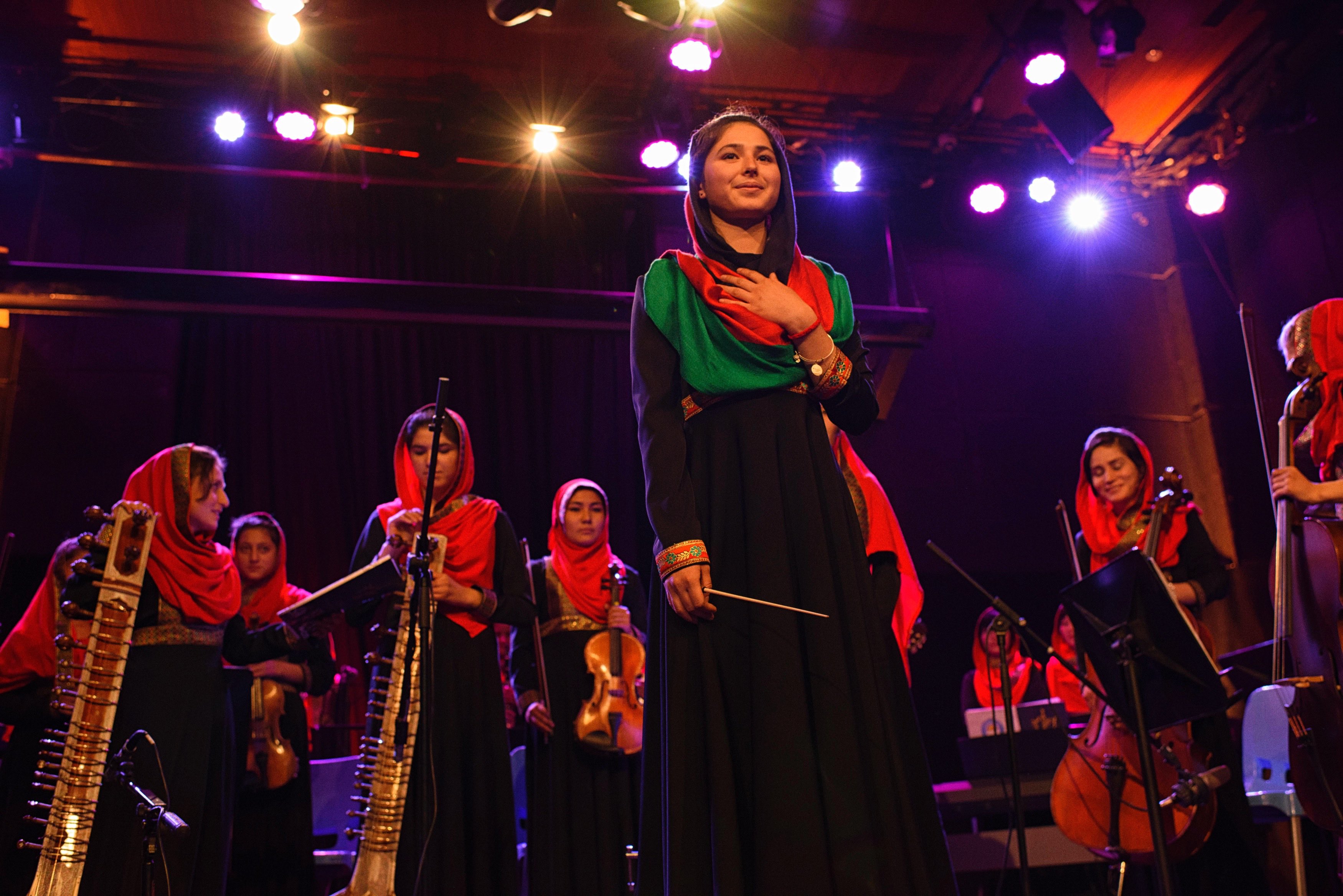 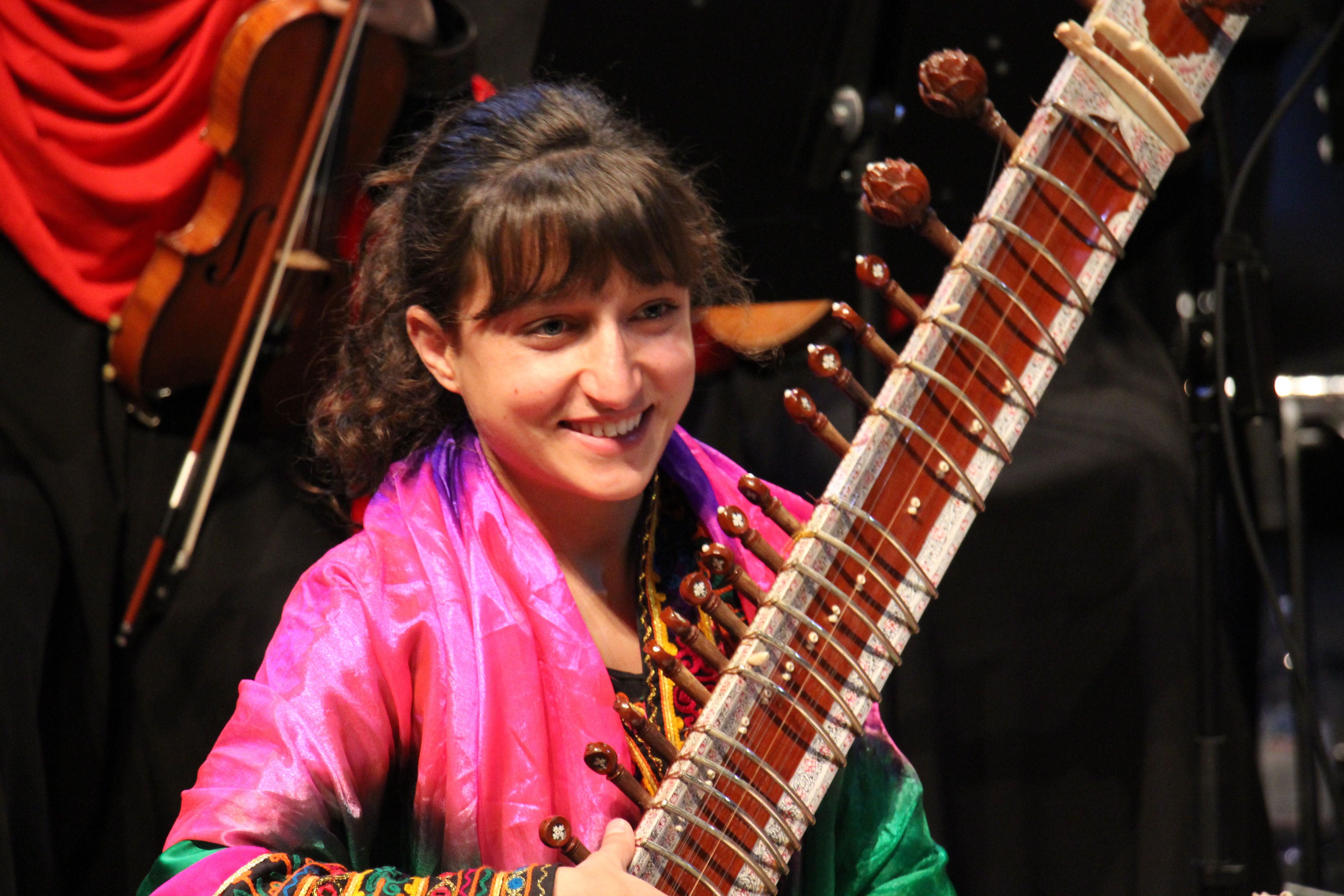 When Negin grabs her conductor’s baton and Nazira lugs her cello case across Kabul’s dusty roads, they’re not just breaking taboos; both women are putting their lives at risk. As a consequence, they board at a Kabul orphanage in order to pursue their dream at ANIM. It’s a safe space for them. Negin and Nazira were under the age of 10 when they left their families behind, although they are quick to shrug off any notions of bravery. “All of our Zohra members have problems with their family,” they reply. “We are all strong.”

When Zohra was founded in 2014 there were fewer than ten musicians. Three years later, over 30 Afghan women now rehearse twice a week – including Negin, who conducts the ensemble; and Nazira, who was one of the first women to learn cello in Afghanistan. It was a young trumpeter called Meena who first asked Dr. Sarmast why there wasn’t an all-girls ensemble at the school. He didn’t have an answer – and the Zohra orchestra was born.

Toward the end of last year, Meena went missing after she told the school she was visiting her family’s village in the province of Jalālābād. She never returned. When I ask about Meena’s whereabouts, Dr. Sarmast tells me that she finally called a few days ago to let them know that she’s was okay and ready to return. Does this happen a lot? “From time to time we experience challenges,” he replies. “Most of the girls come from the provinces where girl’s education doesn’t have strong support. The fathers of the families are generally very supportive of their kids but they are giving in to pressure from the religious leader of their village or a member of their clan.” When this happens, there’s very little Dr. Sarmast can do. It’s not uncommon to lose girls like Meena. 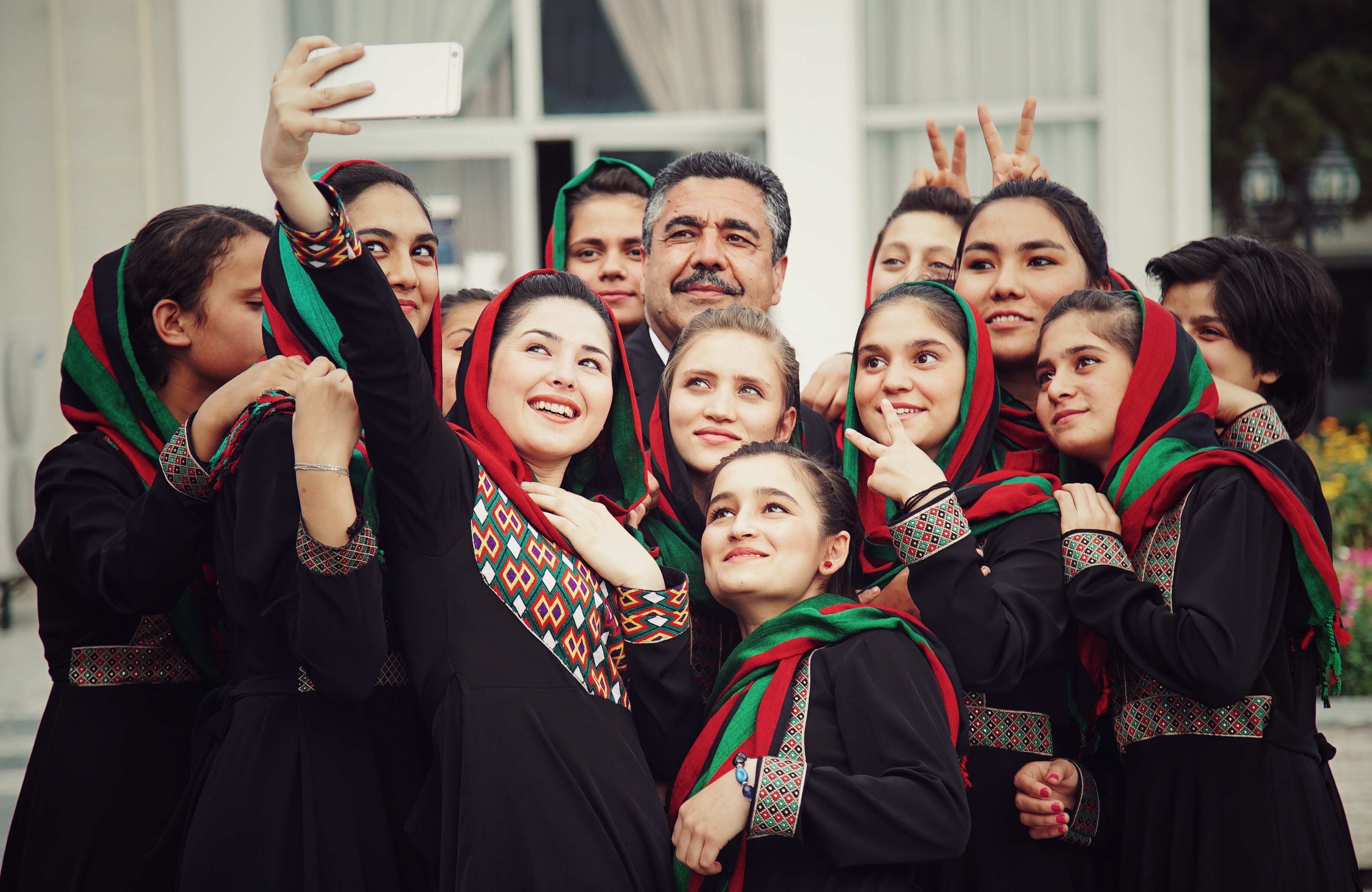 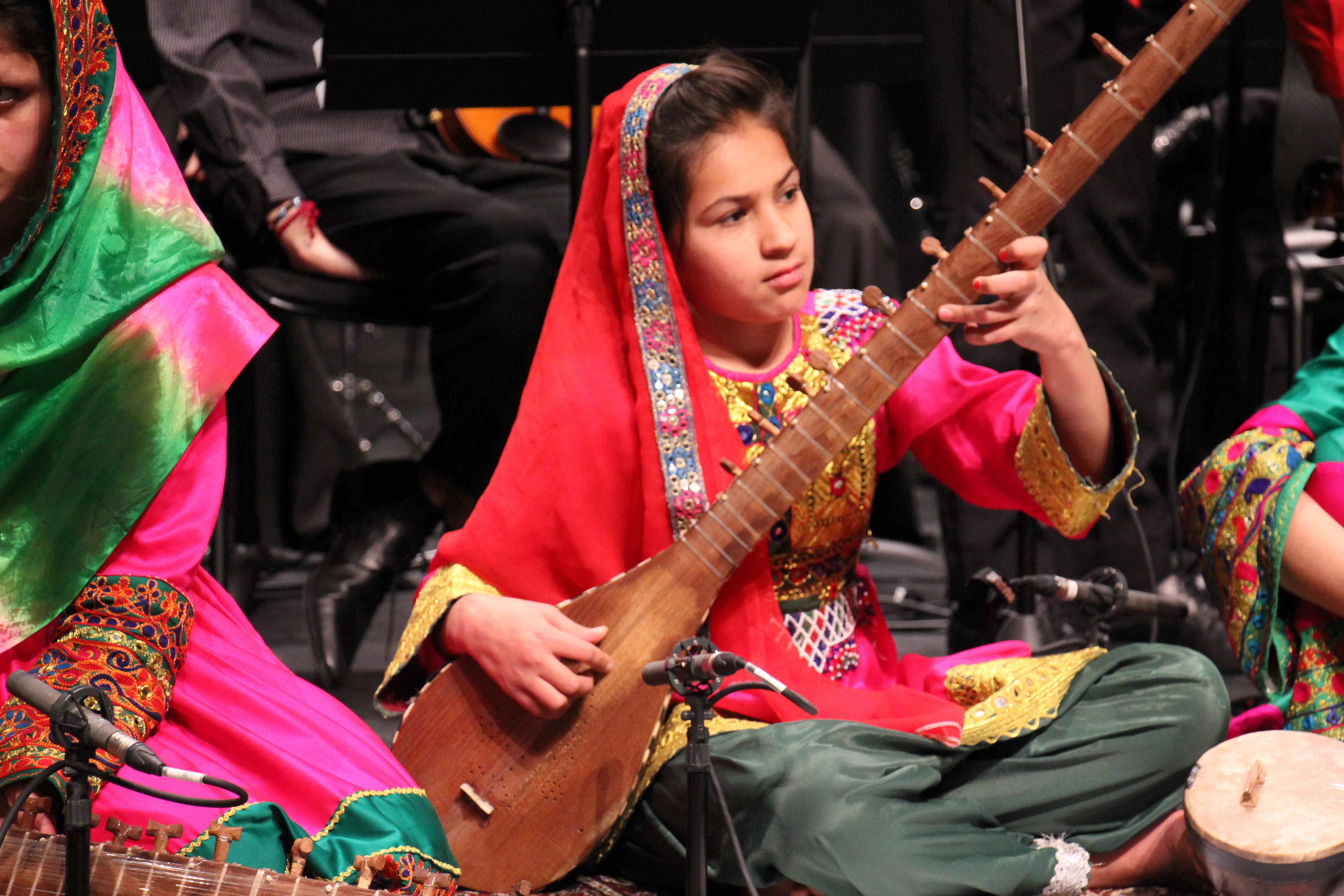 Dr. Sarmast isn’t simply a witness to the challenges he speaks of. Music is a dangerous pastime in Afghanistan – as he experienced first-hand three years ago. In 2014, he was attending a concert in Kabul when a Taliban suicide bomber blew himself up in the audience. Sitting in the front row, Sarmast suffered severe injuries when eleven pieces of shrapnel lodged themselves in the back of his head. “These people [pro-Taliban and Daesh] are around and they’re not going to give up any opportunity to silence the people of Afghanistan once again and deprive them of their musical rights,” he tells me. ANIM is such a visible symbol of freedom it will always be a target. “We’ve had to spend a lot of money to beef up security around the school,” he explains. In dreams begin responsibility. Dr. Sarmast’s main objective isn’t simply education – it’s keeping their young musicians safe.

Chatting with Negin and Nazira, I’m bowled over by their unwavering determination in the face of such dangers. Both women want to become professional musicians in a few years’ time and Nazira would like to teach as well, focusing on girls. They play their music to make people feel happy, they tell me. Music is something strange and new in their country, and the joy it gives them is boundless.

When I ask about their concerns for the future, it is inevitable that the Taliban is named. They fear the regime’s return. They hope it won’t happen. Beneath the anxiety their optimism spreads beneath them like ancient roots; invisible yet unbreakable.

Women in Afghanistan are fighting for their rights, Negin tells me, in spite of the shadows that loom. “I think they will make it,” she says, wishfully. “And one day Afghanistan will be free.”

Linkedin
RELATED ARTICLES
OTHER ARTICLES
Zsófia Sivák’s ongoing project documents the country’s tavern culture, preserving a once defining part of rural life.
Taking us through one of the most dynamic years in recent history, Laylah Amatullah Barrayn new photo book contains tender yet confrontational portraits.
Photographer Sean Maung reflects on documenting a small town in Pennsylvania afflicted by high levels of unemployment, poverty, violence, crime, and addiction.
After a two-year hiatus and a new album, the Nigerian artist is riding high. Now, he wants to bring his alternative, genre-bending sound to the world.
After fleeing the war in Ukraine, people are finding it impossible to secure affordable and decent housing in the UK.
A new law change is enabling Britain’s donor-conceived children to know the truth about their origins – but campaigners say the fertility industry must do more to protect people.