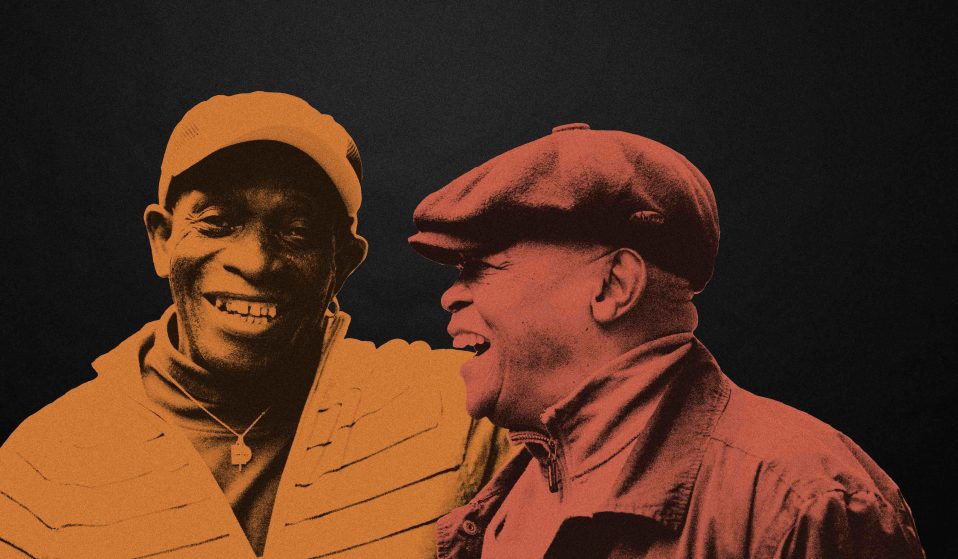 One of the most influential musicians alive, the Nigerian drummer is back with his decade-in-the-making new album, Rejoice.

One of the most influential musicians alive, the Nigerian drummer is back with his decade-in-the-making new album, Rejoice.

When Tony Allen and Hugh Masekela went into the studio together in London a decade ago, they had no idea it would take all this time for the fruits of their labours to see the light of day. Sadly Masekela, the South African father of jazz, died in 2018, but Allen has persevered and Rejoice is finally with us. A celebratory album of great verve, it is a fine tribute to Masekela and another gem in Allen’s long, collaborative discography.

It’s no exaggeration to say that the Nigerian drummer is one of the most influential musicians alive; the progenitor of Afrobeat with Fela Kuta and, in the words of Brian Eno, “perhaps the greatest drummer who ever lived”. Born in 1940 in Lagos, the indomitable musician is looking forward to celebrations for his 80th birthday later this year with gigs, guests and surprises planned throughout 2020. In recent times, Allen has enjoyed a renaissance as an in-demand sticksman for bands like The Good, The Bad and the Queen, as well as a disparate list of artists like Jimi Tenor and Jeff Mills. As a resident of Paris since the ’80s, he’s also played with solo artists like Charlotte Gainsbourg and Sebastien Tellier.

Tony Oladipo Allen began his musical career as a teenager, playing with assorted highlife jazz bands doing the Lagos circuit in the late ’50s and early ’60s. In 1964 he joined Fela Kuti’s group, Koola Lobitos, though it was a nine-month stay in the US in 1969 that can be regarded as the turning point in the fortunes of both men. Renaming the band to reflect a new decade and a new purpose, Africa 70 played staggeringly energetic and politically-charged Afro jazz-funk, leading to plenty of violent skirmishes with authorities. Kuti, an extreme character who was unrelenting in everything he did – whether that was dissidence, weed-smoking or polygamy – had his “Kalakuta Republic” compound burned to the ground by troops from the state-ruled military junta in 1977, with many of his wives being assaulted and raped during the initial raid.

As well as Africa 70, Allen recorded three solo albums produced by Kuti, but the pair split in 1979, and the drummer has ploughed his own furrow as a solo artist and percussionist for hire ever since. When I meet Tony, he balks when somebody at his label BMG informs him the interview will last half an hour, but once in the groove, his laconic demeanour is offset by moments of avuncular warmth and the occasional heartwarming chuckle. I mention that I recently read Fela Kuti’s ghostwritten autobiography Fela: This Bitch of a Life and that Tony is conspicuous by his absence. He receives one mention, where Fela refers to him dismissively as “Allen, my drummer then”. Tony pauses for a moment, then exhales sharply, before laughing quietly to himself at the sheer effrontery.

Congratulations on finally getting Rejoice out.
Yes, finally, it’s there at the end.

The actual initial recording was done very quickly, wasn’t it?
Yeah, we kind of did it in a weekend. We had two days of recording, just Hugh and me. We did 10 tracks altogether but I think there are eight on the album, because a couple weren’t quite there.

When did you first meet?
I met him in Nigeria in the early 70s.

He had a massive hit in ‘68 with ‘Grazing In The Grass’, didn’t he?
In the ’60s I think he was living in the States. He was rated the ninth-best trumpet player in the world at the time.

Are trumpet players rated like tennis players then?
At that time, yes. And Miles [Davis] stayed number one right until the end.

You also lived in the States in 1969. Fela Kuti was staying with Sandra Smith who was heavily involved with the Black Panther Party while you and the other musicians in the band lived in a reputedly horrible house. Can you say more about that?
In ’69 we were supposed to be there for two months, and then we ended up being there nine months. We were playing in the midwest and on the east coast, and then we ended up in California. The music was different then, we were playing what they used to call highlife jazz. 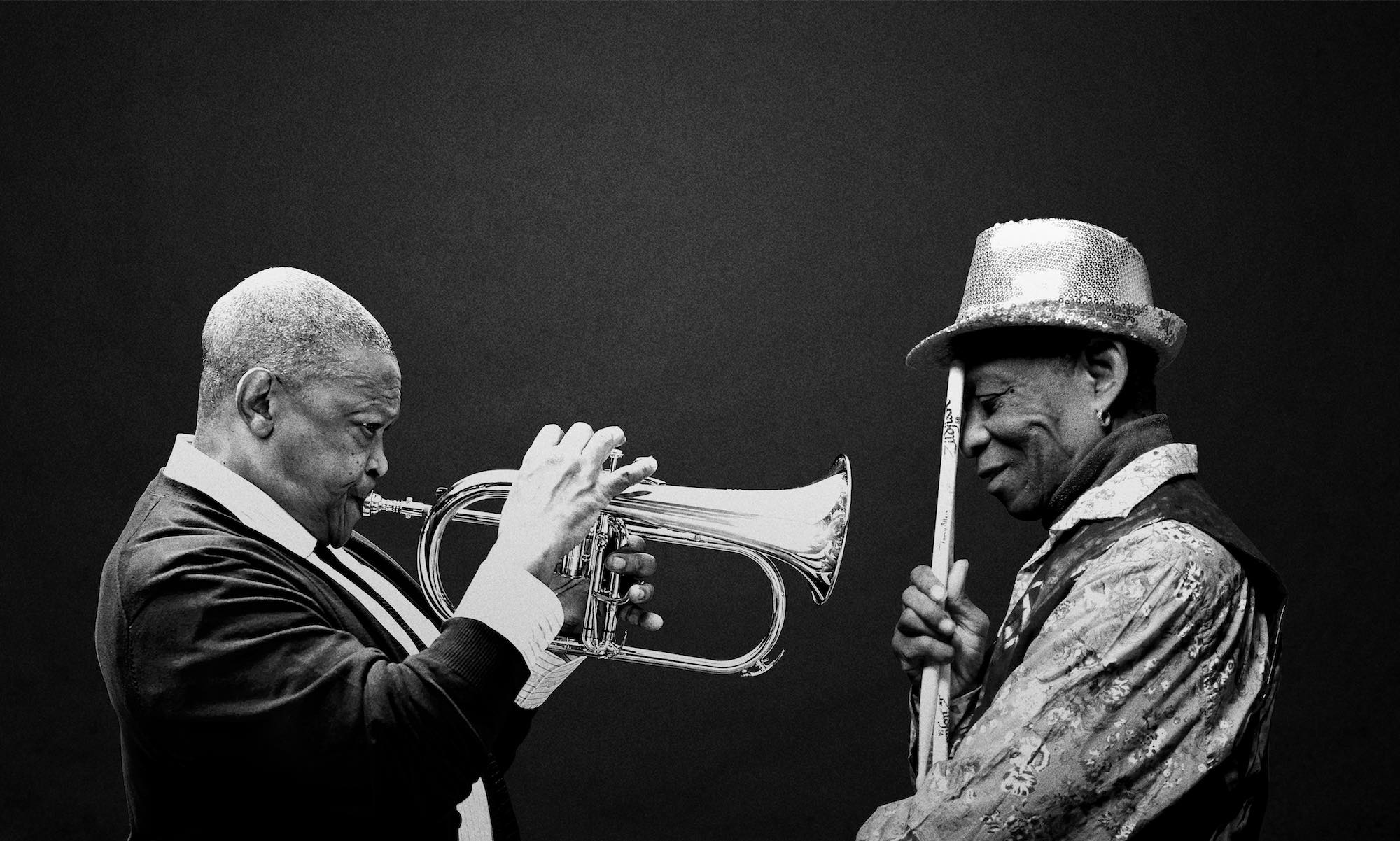 And Fela became politicised?
That’s right, he became politicised. He wasn’t singing like that for the first five years. He was not militant, he was singing about love and things like that. Five years later, after we came back from the States, everything changed. He never smoked before. He didn’t drink. But as soon as we were in the States and he was living with Sandra, he started smoking weed and his ideas started to change. Sandra gave him books to read like the autobiography of Malcolm X.

Did you become more politicised as a result?
[Laughs] No, I didn’t want to copy Fela with his ideas. There were a lot of things that he didn’t know that I knew already! With him, as soon as he got to know something, he had to do it more than everybody else. He doubles or triples it. That was his character. He didn’t know about it before but as soon as he was awakened he expanded upon it.

A few years ago you told the Guardian that you ‘detest singing militant’. You often play with very political artists though. Why is that?
I don’t like to copy what other people are doing. When he became militant I was just playing the drums, you know what I mean? And then he starts smoking and his mind becomes more open I would say, and he decides to follow militancy. He produced my first three solo albums, and the first one was called Jealousy, and I was singing about how human beings relate to each other. Then I did Progress and I was doing the opposite to him, singing for the common people, you know? And then I did No Accommodation For Lagos which was my first political album where I was singing against the system. Not because I was trying to copy him, but because there were so many homeless people after they’d cleared the slums and displaced everybody. That was a subject that touched me. He produced it and that was the last album he did with me before I quit.

When you quit, was it because things were getting too crazy or because of money issues?
It was about everything. Mostly I was fed up with being his assistant. I didn’t see myself staying in such a situation forever. It was the hypocrisy, too. It was still difficult for me to make that decision.

I suppose when Damon Albarn sings about the state of the nation he has no fears that troops will come around and burn his house down?
No, they wouldn’t do that. Damon can sing whatever songs he likes and they would never come and touch him. No police, no army, or President or Prime Minister who can say, ‘what this guy is doing is against the law and against the system’. They wouldn’t do that here. But in Africa, everybody could take the law into their own hands and there are uniforms ruling the country.

While there’s a freedom in the music of Fela Kuti and Africa 70, I think you can also really hear that sense of pressure…
The music is there, the message is there, and the music is pushing the message and the message is pushing the music, so it’s forceful. Everybody gives their all because they know that this is what we’re facing. The system is what we’re dealing with and nobody is allowed to say anything against it, and nobody can challenge it, and most people don’t want to lose their jobs so they can’t say anything. These songs about slavery and rights – it’s not like they weren’t there before – but Fela never wrote about them. He became aware when he started to smoke, I think. That opened up his mind very wide!

You played with the late, great Ginger Baker, who was your friend. He played with Africa 70 but he didn’t play Afrobeat did he?
No, in the first place he’s using a double bass drum whereas I’m using just the one. He uses the high-hat but it’s closed because his legs are busy with his bass drums. The way drumming sounded to him was the opposite to me. So when we played together I always made sure there was plenty of space for us so you could hear him and you could hear me too.

When did you last see Ginger?
I played with him when he won a Zildjian award (in 2008) and he invited me to come and play at the Shepherd’s Bush Empire. And then recently this last year: we were gigging again together but I don’t remember the place. And that day when I saw him backstage I said, ‘what the fuck are doing here?’ He was sick. He told me he’d just been discharged from the hospital. He didn’t look good. I said, ‘you should have stayed at home’ but that’s a gentleman. He didn’t want to disappoint me.

Journalists often saw the other side of him, didn’t they? He wasn’t always a gentleman with members of the press…
It’s control. It’s all about control.

Rejoice is out 20 March on World Circuit Records.

Linkedin
RELATED ARTICLES
OTHER ARTICLES
Photographer Jeffrey Silverthorne always treated his subjects – often those living on the margins of society – with empathy and respect.
Recent research is highlighting the drug’s enormous potential for treating substance abuse.
The demonstration took place this week over plans to slash £50m from arts bodies in London.
Alternating between colour and black-and-white, the photographer chronicled sexual liberation, economic crises and the repercussions of the war in Vietnam.
A campaign seeking to prevent future injustices where there is state involvement is gaining momentum, with Labour recently pledging its support.
A new documentary tells the story of an unassuming cul-de-sac of 13 timber framed houses built by Fusions Jameen – London's first Black housing co-op.