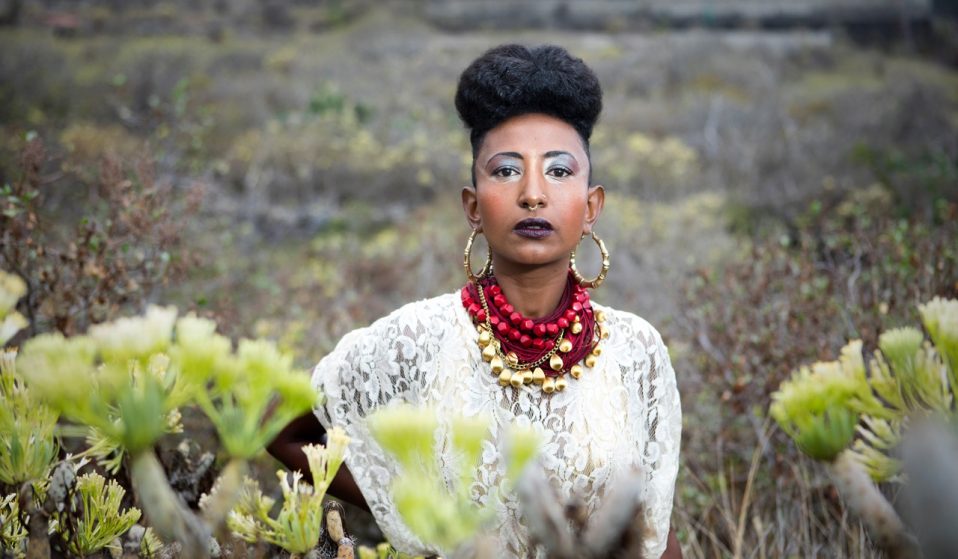 Influenced by artists from Sudan, Ethiopia and Zanzibar, the band – self-dubbed makers of “East African retro-pop” – have curated an eclectic sound that celebrates transience and self-expression.

Influenced by artists from Sudan, Ethiopia and Zanzibar, the band – self-dubbed makers of “East African retro-pop” – have curated an eclectic sound that celebrates transience and self-expression.

In a house perched on the edge of one of Tenerife’s grand volcanic cliffs, Alsarah and the Nubatones are hauled up working on new material.

Born in Sudan and raised in Yemen, before finally settling in America, transience and displacement are at the heart of everything Alsarah and the Nubatones explore in their music. “I’m more comfortable as an immigrant than as anything else,” Alsarah explains, sipping a beer on the roof terrace. “Being an immigrant and Sudanese are now tied with each other so deeply that I don’t know how to separate them.”

Though both her parents were academics, Alsarah grew up surrounded by songs. Her mother pushed art as a form of self-expression, encouraging her children to throw themselves into creativity from an early age. At six years old, Alsarah stumbled upon a tape by a radical left-wing collective of Sudanese artists, encouraging people to vote in the 1986 free elections. Despite her age, it had a profound effect. “It was the first time I remember hearing music that I understood to have a clear purpose outside of just pleasure,” she remembers. “That [idea] really stuck to me – that music is a message carrier’”.

When the military coup of 1989 broke out in Sudan, her parents, both vocal political activists, moved the family to Yemen, where Alsarah experienced “real, intense racism” for the first time. Discrimination between Arabs and East Africans, she says, is prevalent, despite rarely being discussed outside of the two communities. “I realised [then] I am not an Arab, but an East African who speaks Arabic.”

Four years after arriving, war forced the family to flee once again. Alsarah was 12 when the family landed in Amherst, deep in the heart of white, rural Massachusetts. Adapting to her new life in America was tough, so listening to music from different parts of the world became her way of travelling home. Though she’d begun collecting old tapes back in Yemen, it took on a whole new significance in the US: it was escapism. 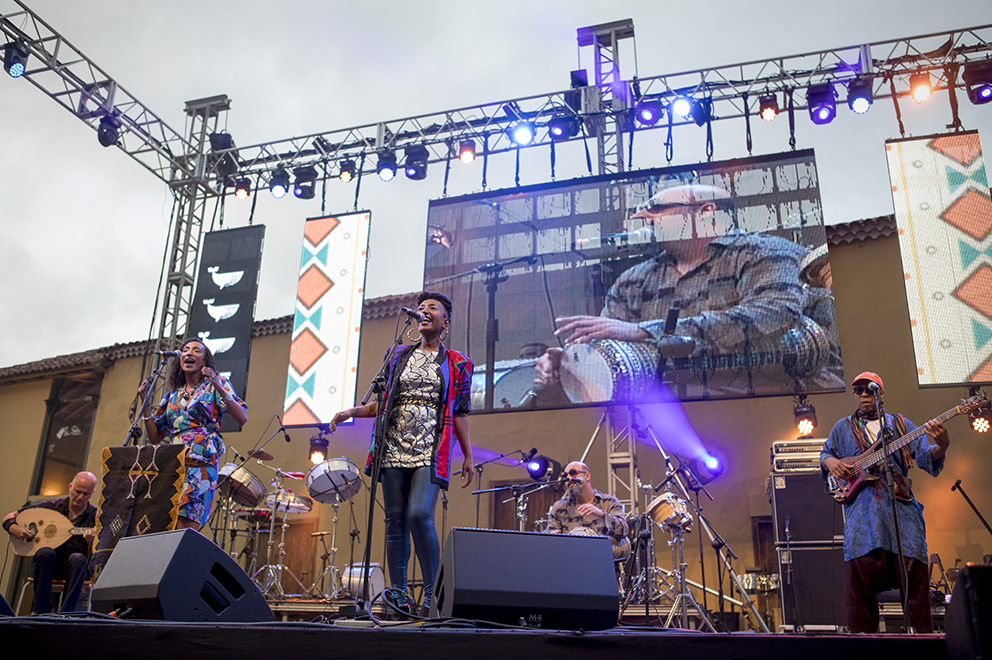 After working her way through school, she went on to study ethnomusicology at Wesleyan University; though she discovered that she didn’t want to pursue a career in her academic field (“they are like anthropologists of music – their job is to be outside, I wanted to be inside”). Post-graduation, she moved to New York, where she became the lead singer of the band Sounds of Taraab – where Rami El-Aasser played percussion. Four years later, they formed Alsarah and the Nubatones.

Influenced by artists from Sudan, Ethiopia and Zanzibar, Alsarah and the Nubatones’ sound is an eclectic one. At the heart of their music are the Nubian ‘Songs of Return’ from the 1960s – a music genre that derived from the mass displacement of people during the construction of the Aswan dam in Egypt. The barrier, Alsarah explains, changed the flow of the river Nile in north Sudan and south Egypt, flooding cities, agricultural land and forcing thousands of people to migrate. It split families like Alsarah’s between the two countries. “I grew up on two sides of one border, as proof that the concept is made up.”

First album Silt, formed of 50 per cent original compositions and 50 per cent traditional songs, came out in 2014, at a time “when no one else in New York was doing Nubian music”. Though they were unique in that sense, Alsarah never felt like singing in Arabic created a barrier between her and Western audiences. “Language is another illusion, just like borders,” she says. “We find other ways to communicate: with our bodies, through sounds. Doesn’t all of that communication count?”

Second album Manara (2016), which they played at Glastonbury 2017, delved into the emotional impact of having to leave home. “Manara is the lighthouse that helps you to ‘anchor’ when the sea is too rough,” she explains. As a record, it encapsulated what music always represented for Alsarah: a safe space, from which to explore both the world and yourself. “The most important thing for me is to maintain that purity,” she adds.

In Trump’s America, the Nubatones’ approach has taken on an even greater political significance: Alsarah’s celebration of her status as a proud immigrant has evolved into active defiance. “I grew up with the idea that people… move,” she says, matter-of-factly. “I’m not sure when we started believing that they don’t. But no one has the power to take away your identity unless you [let] them. History is written by winners, just like governments are run by the one per cent, but it doesn’t mean that you, as a small, individual entity, stop existing.”

“It has made me claim America [as my own] a lot harder than I’ve ever done before. You can’t get rid of me. I am American! If you are not a person of the first nation in America, then you are an immigrant too. For people to talk like that is beyond hypocrisy. So, I refuse to respect [some] Americans’ concept of ‘No immigrants.’” 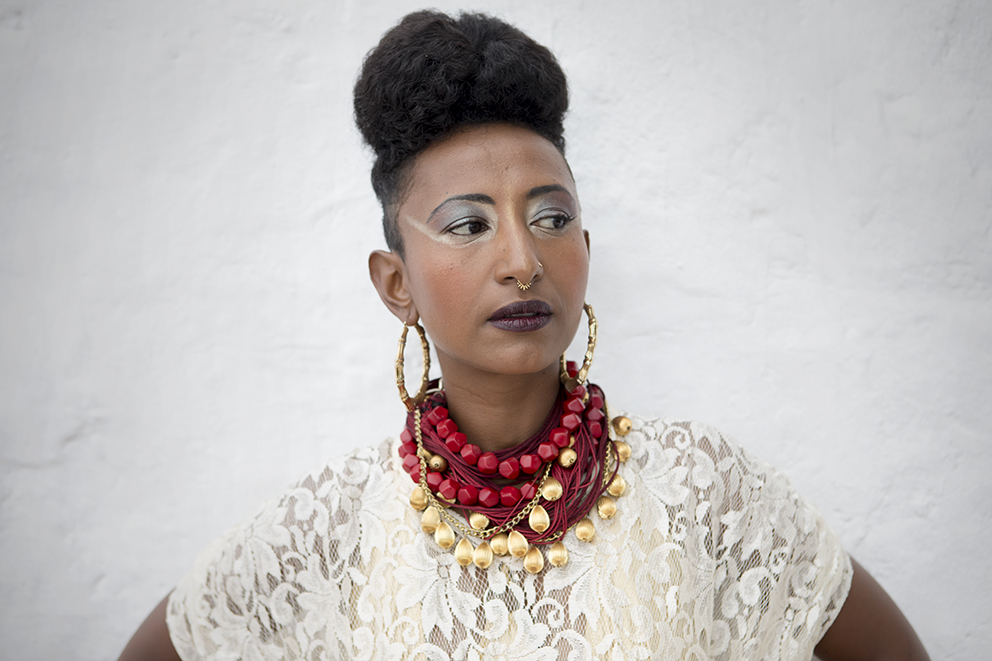 For Alsarah, music, and communication are entangled. Whether she’s combining it with social commitments (see 2010’s ‘Vote!’, released prior to the Sudanese elections of that year) or using it to delve into histories (she’s at the forefront of a new generation of artists keeping the Sudanese tradition of aghani al-banat – “girls music” – alive), she views it as a space in which she can explore and reflect.

When the band finally make it back to New York, a new album is to come (Alsarah hopes that recording can begin by the end of the year). However, despite the enjoyment she takes from being in the studio, it’s being in front of an audience that truly excites her. “Music is a social act”, she says quoting an excerpt from Jace Clayton’s book, Uproot. “It’s flexible… and that is why it’s awesome.”

Linkedin
RELATED ARTICLES
OTHER ARTICLES
A campaign led by ex-torture survivors and refugee organisations has left the Tories with no planes left to carry out their callous scheme.
After being subject to racism growing up, Kavi Pujara’s photo series allowed him to reconnect with and reimagine his hometown.
Shaunak Sen discusses his documentary chronicling an ad hoc hospital’s efforts to protect the city’s birds of prey.
The Egyptian government are continuing the repressive mistreatment of environmental campaigners.
SOAS Detainee Support detail the appalling conditions they witnessed at the dangerously overcrowded immigration centre in Kent.
Following the release of their third album, the duo talk collaboration, family and connecting with the dead.