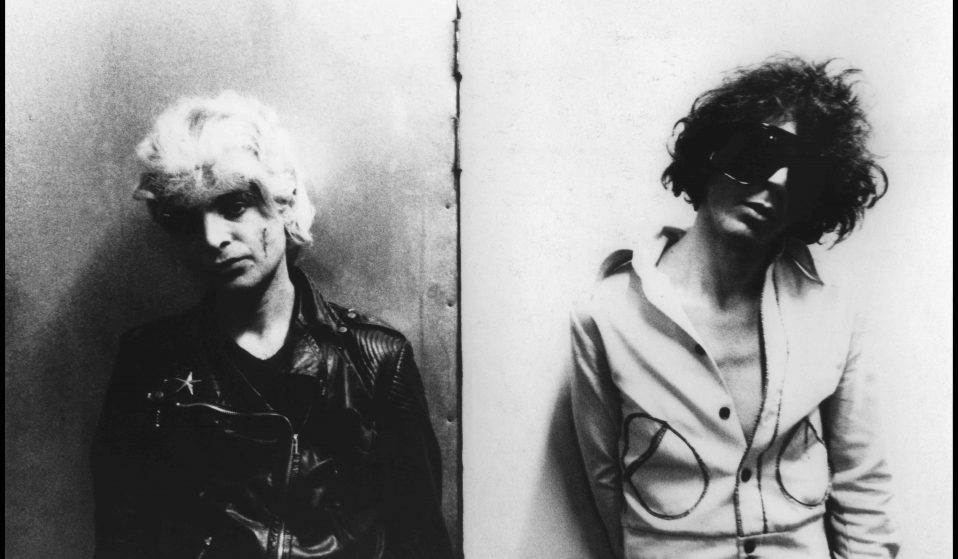 As one half of experimental punk group Suicide, Martin Rev offered a voice to downtrodden, working-class Americans. He looks back on his legacy, capitalist critiques, and what’s changed since 1977.

As one half of experimental punk group Suicide, Martin Rev offered a voice to downtrodden, working-class Americans. He looks back on his legacy, capitalist critiques, and what’s changed since 1977.

The late, great Alan Vega used to say Suicide were “so punk that the punks hated us”. Forged in the white heat of resistance to the Vietnam war in 1970, the New York City duo started life as an untamable performance art project that was one part Iggy Pop, one part Antonin Artaud. It also had jazz drummer Martin Rev at the back, and the Elvis-loving Vega on trumpet (with a noise guitarist added to the lineup for a while). They were apparently excellent at clearing rooms.

“Alan’s performance was that of a visual artist after he experienced an Iggy Pop concert in New York,” says Martin Rev on the phone from his home in Manhattan. “That was a turning point in his life. Alan distilled Iggy and also all the incredible knowledge he had as an artist, and as a person too by that time. He had a unique intensity that brought a certain colour to everything he did.”

Suicide transmogrified into a more electronic and unsettling unit over time. Rev began experimenting with synthesisers, and the eponymously titled debut was recorded six years into their career. Suicide is gloriously minimalist, preternaturally cohesive and sporadically violent in all the right places and, like the name, it still has the power to shock 42 years later. It also serves as a commentary on living in America for the downtrodden proletariat in 1977, and naturally, it hasn’t dated much either. The same feelings of desperation that permeate the album are still relevant to so many in 2019. It’s a provocative piece of art that brutalises you each time you listen to it, dripping red like a Jasper Johns’ flag; a fucked-up facsimile of the American way of life which flips the American dream to reveal a nightmare.

The Suicide 77 album still sounds transgressive, and I wonder if it was released today whether it would be considered un-American by some? You clearly don’t hate your country, it’s just commentary…
Yeah, and how we were living and how we were feeling, and the struggle of just trying to survive in America. Lyrically there were clear references to Vietnam such as, ‘America, America is killing its youth’ from “Ghost Rider”.

Wealth inequality hasn’t been so disparate since before World War II, which makes some of the tracks – like “Frankie Teardrop” – all the more tragic to listen to in 2019.
Every economic system or philosophy is not perfect and has fissures. It’s particularly stark when the leadership uses the system more to just enrich themselves and their own power, which is usually the case because it’s what power does. When they’re not honest about fixing and managing those fissures that are part of that system then you have problems.

Does it feel like you’re living in the crucible of capitalism right now?
Well back then it felt like that too. At this time there’s a genuine crisis we’re going through. America always had problems and things to work on like everywhere else, but it always had great potential too, and ideals. But those ideals had to be struggled for by civil rights movements and so on, and there’s always been a tendency for the ruling classes to sacrifice them for their own ends. When the leadership is fairly sane it’s always a moderation of those things.

New York exploded with creativity for decades – would you say that’s dried up somewhat in the 21st century?
You can only keep an incredibly fertile culture turning over soil for a certain amount of time, and then it tends to start somewhere else. The jazz musicians aren’t here anymore, the new experimental dance culture, the abstract expressionists, the beat movement and the punks… You can’t invent those kinds of situations like you can’t reinvent cubism and impressionism, symbolism and surrealism in Paris.

You once described Suicide as the ‘Che and Fidel of the New York scene’. When you look back to all those amazing bands that were part of the same milieu, do you feel you were more a part of something than you realised at the time?
There were some of the musicians who we knew and felt friendly with right away; we certainly had commonality on that level. But when I said that, it was more related to what we were coming into. Whenever you come into a scene that’s already mainstream and established and you’re purporting to do something new and revolutionary, you’re in fact saying: ‘This is as good as what you’re doing, but I’m doing it a different way’, which doesn’t foster closeness. You feel more like you’re on the crest of the next wave, which you are, and you’re fighting for its realisation into the world. You’re trying to find a way to break into the establishment that creates records, and that creates jobs for you as a musician.

You were friends with some great bands: The New York Dolls, The Cramps, Blondie…
We got along very well with the Dolls, but our whole aesthetic had this very different sensibility of alienation. The Dolls were very much a combination of a new sensibility, but also a part of what was the then established world of pop art and Warhol. In those days I was married and already had kids and I was basically trying to find ways to survive. That was a little different to most of the bands in our environment too. Most of them were able to take it a little more easy, although as people we were from similar New York working-class backgrounds.

Your music was deeply uncompromising. When you were emptying dancefloors did you think ‘we’re going to succeed by sheer force of will’?
Absolutely, although the audience reaction you could never anticipate. Alan would come out and do exactly the same thing as he’d done the previous night and some audiences would find it funny. They wouldn’t be able to stop laughing. A little older and a little tougher people, and they wouldn’t leave at all [laughs]. So you could never be sure.

Did people suddenly get what you were about, or was it a gradual thing?
Very gradual. And I guess it’s still gradual. There are still a lot of people who don’t get it – whatever ‘get it’ means to them. And a lot of people still don’t know Suicide and wouldn’t listen to Suicide.

It must have taken some tenacity when you were struggling and bringing up a family to see it through. At some point, a lot of people say ‘fuck it’ and go and work in a bank. That never appealed to you?
The dedicated people and artists who continue into their adult lives are going to be challenged in so many ways, and I suppose the ones that don’t give up don’t give up. When I met Alan I was already quite developed even though I was a 21-year-old. I was very dedicated to what I wanted to do, and Alan, who was a bit older, was as well. He’d already dealt with those obstacles and when I met him he wasn’t even living at his own place. It’s tenacity for sure, and one could argue it’s an obsession. It’s a love-motivated obsession, just like love is.

Suicide’s 1977 self-titled debut LP is being reissued on vinyl this month.

Linkedin
RELATED ARTICLES
OTHER ARTICLES
To mark the premiere of his new documentary on surfing giant Gerry Lopez, the filmmaker and former pro skateboarder sits down to share his unique brand of wisdom.
Yesterday, rail workers came together to protest poor pay, working conditions and job cuts in their latest round of strikes.
With the virus now a global health emergency, we must take steps to fight misinformation and demand a swift UK-wide vaccine roll out, writes Phil Samba.
Ahead of the release of his new album, the producer reflects on his battle with drug use, getting into painting and what Madonna taught him.
The Conservative leadership contest has exposed an obvious truth: whether our next prime minister is a woman, or a British-Asian man, they will continue to fan the flames of division.
A series of photos by the late Jerry Dantzic taken in 1957 show a tender side to the iconic Jazz musician.