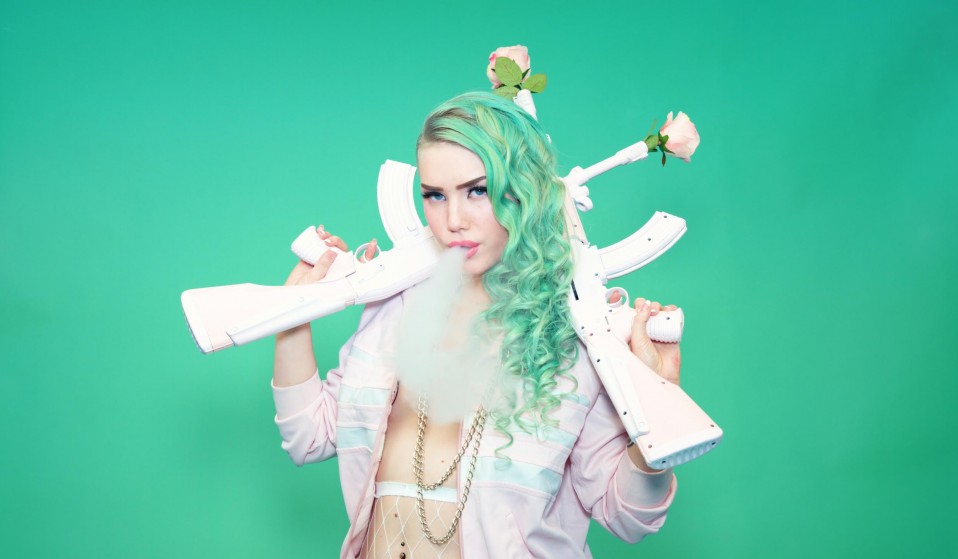 Meet the up-and-coming pastel-haired performer who's here to smoke weed, have fun and talk about borderline personality disorder, pussy and pansexuality.

Meet the up-and-coming pastel-haired performer who's here to smoke weed, have fun and talk about borderline personality disorder, pussy and pansexuality.

“I don’t care if they think I’m some stupid stoner girl, because I know I’m not,” Ängie tells me, with the same level of confidence that seems to exude from almost every one of her words. It’s the morning after her debut gig in London, and the Swedish pop sensation and I are sat in the back of a café just off Earls Court station in the capital.

As a performer, the 22-year-old is full of contrasts. She calls her style “cute, but hard”, and you don’t have to look too far to see where this definition comes from: Her videos feature pastel backgrounds paired with machine guns, unashamed femininity paired with drugs and unrepentant sex. But above all, the contrast seems to be between the serious artist set on speaking out about mental health and the chilled out club anthems she’s so far created.

Dressed head-to-toe in baby pink, Ängie is more than friendly as we sip on our lattes, she speaks excitedly and comfortably about anything at all: The golden days of emo, the internet, bad experiences with dudes in bands, homophobia and amphetamines too.

This openness, she tells me time and time again, is one of the things she prizes most about her personality, and hopes it’s a trait that is picked up on by her fans. To this pastel-haired singer, candidly talking about the harder stuff in life is a path towards self acceptance – something she learned through years of self-reflection.

However, unsurprisingly, most of the headlines generated about this rising star have so far focused on her “controversial” lyrics, waxing lyrical about smoking weed and eating pussy is far from common in an industry where women are so often presented as passive objects to be consumed. The Sun even went as far as dubbing Ängie “the most shocking pop star of 2016”. When I ask her how she feels about that title, she’s clear she doesn’t see herself as particularly controversial, and that the songs really aren’t meant to be taken that seriously.

“If Yung Lean was there with pink hair rapping about the same stuff I rap about, he’d be cool”, she says, after a sigh. “If a guy does this kind of thing he’s so awesome, but the moment a girl does it, she’s just a hoe. But honestly, fuck the people who say that.”

Once finished with her coffee, she tells me about her entrance into the industry. Initially wanting to become an artist or photographer, the start of her career two years ago was quite unusual: She snapchatted herself singing her song “Smoke Weed Eat Pussy” (“in a silly voice”, she adds) to Swedish indie pop duo Death Team. To her surprise, they invited her to the studio to record it, and from there it all just sort of took off.

“It feels like it’s easy, but it’s really not”, Ängie says. “It’s really hard, especially when you’re sick in the head like me. I’ve got Borderline [Personality Disorder], ADD, as well as other stuff. It’s weird to understand what’s going on all the time and to give myself the “you deserve this, you worked hard” pep talk. It’s hard to be kind to yourself.”

Mental health is something that pops up a few times in our conversation. With Borderline Awareness month coming up in May, she wants to start addressing the struggles faced by people living with BPD.

“I just wish people would accept people with borderline a bit more”, she says when I ask what she’d like to see change. “People don’t really get it, they think you’re just being ’emo’. But really, it’s like your emotions are much more vulnerable – when you’re happy you’re so excited and it’s like ecstasy for four days, but when you’re sad you just want to kill yourself. The only thing that makes you stay alive is that you feel bad for your parents, or your friends”.

In her Instagram captions Ängie has written about self-harming, being bullied, depression and what she felt like as a kid growing up with a complex family life in a homophobic small town in Sweden.

It’s obviously hard to talk about “the most shocking pop star of 2016” and ignore weed; she just talks about it so much. Sweden, it turns out, isn’t overly fond of the drug, despite their free-thinking reputation: if found smoking it, even for medicinal purposes, you might be given a permanent criminal record and even jail time. Ängie tells me that because of her openness about smoking the stuff, she’s now waiting for a letter telling her to “come piss in a cup”.

But she doesn’t care about any of that, and true to form, is going to continue talking. She sees herself as an activist in the fight for legalisation. “It’s almost like self-medicating, but in a good way,” she tells me. “When I tried it for the first time, I got to know myself from a fresh perspective. Before, I always tried to fit in. I wanted to look like all those it-girls with blonde hair and skinny jeans. But when I started smoking weed, it really helped with my depression and my anxiety, and I started thinking about who I was, and why I was trying so hard to be someone I’m not all the time.”

Despite what you think about her style of music or her lyrics, dismissing Ängie as another cookie-cutter pop star would not only be extremely patronising, it’d be foolish.

But where to next? With a new EP on the way and a load of new songs to be released, she assures me she’ll be exploring the variety of her voice and genre, which isn’t “just about weed and pussy”. Drawing inspiration from Lana Del Rey, she also plans on creating a short film to accompany the album, biographically portraying her “weird” life between the ages of sixteen to eighteen.

“My dad was in jail for my whole life, but I had to move in with him when I was 16 because my mum got kind of crazy. I didn’t really know him when I moved in, so we were more like friends – I did a lot of drugs without him knowing. I was doing amphetamines when I was just a kid”, Ängie tells me bluntly, as we step outside to smoke a fag.

“It’s not good, but I’m really happy with how things turned out, because I get inspired by myself when I think about the past. I was just a kid, and I handled really difficult things really well.”

Linkedin
RELATED ARTICLES
OTHER ARTICLES
Over the weekend, the United Families & Friends Campaign organised a protest calling for an end to deaths at the hands of the police.
After voting to strike across England, prison teachers explain why they’ve been pushed to a breaking point.
Photographer Ira Lapu documents the lives of ordinary Ukrainians living amid a brutal conflict.
After being subject to racism growing up, Kavi Pujara’s photo series allowed him to reconnect with and reimagine his hometown.
A new exhibition brings together 150 works by twelve photographers, offering mesmerising and intimate depictions of life.
The hate Just Stop Oil faced after throwing soup over a Van Gough painting has been immense. Here, they explain why it won’t deter them.