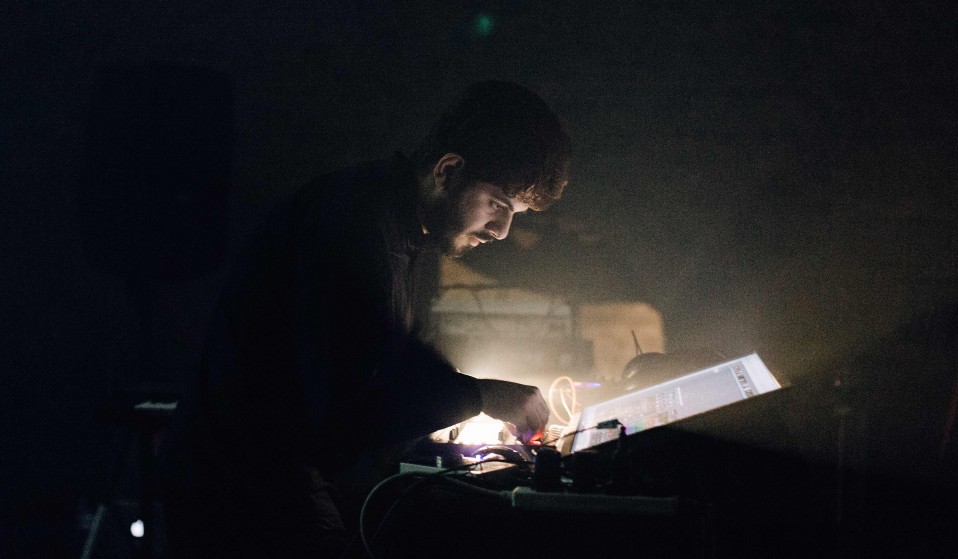 The influence of technology, computing and robotics is only going to grow, dominating more and more aspects of our lives. While many fear a dystopian future, musician Ash Koosha is exploring the possibilities of co-creating art with machines. His unique process creates multilayered sound sculptures from breaking down samples to minute elements within their waveforms, which he feed back and forth symbiotically between him and his computer equipment

Born Ashkan Kooshanejad, Koosha is an Iranian artist excited by blurring genres between forms such as music, film and virtual reality – which he translates back into music during his live performances. 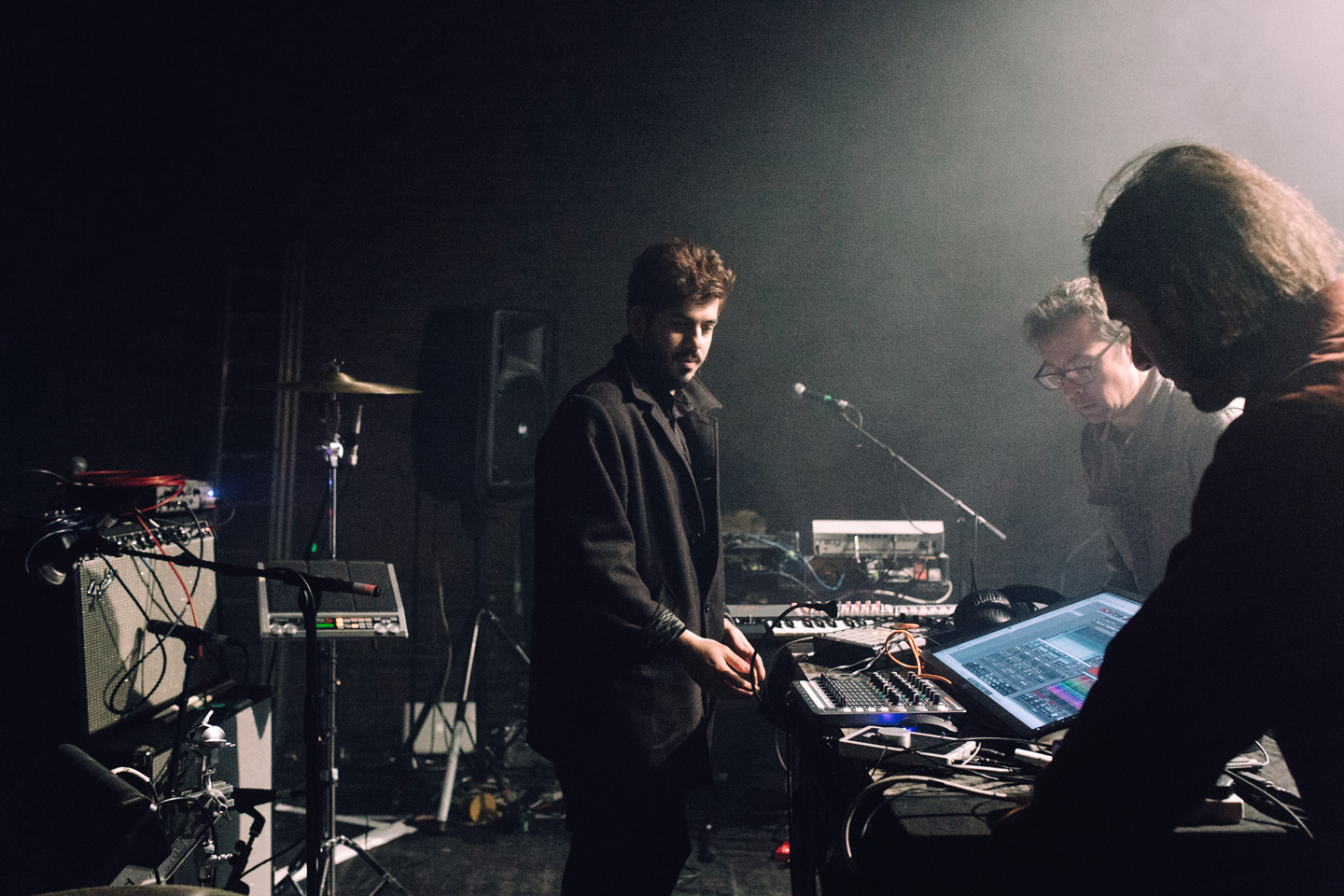 After being jailed for his involvement in illegal concerts in Iran, he worked on the award-winning film No One Knows About Persian Cats with Bahnman Ghobadi, which chronicles Iran’s underground music scene and its battles with authorities. Following a new government crackdown on musicians in response to a wave of protests surrounding Iran’s 2009 elections, he finally chose to seek asylum in London.

After starting life from scratch in a new country, he’s become ever-more focussed on exploring the technological frontiers of what’s possible in music. His interest in everything from futurology to quantum physics, nanotechnology, particles and matter, feeds back into his approaches to composition and performance. His second album I AKA I explores the relationship between the artist and technology, embracing the sharing of authorship and creative control over the project.

We caught up with Koosha at a mind-melting AV show at London’s Village Underground to talk censorship, synaesthesia and ghosts in the machine.

Do you see yourself as an exiled artist?
It’s more complicated than that. I’m pushed out of that country because it wouldn’t accept that kind of progress at that time. The wouldn’t let that change happen in the foundation of society, where you can play music, you can share your ideas. It’s horrible but at the same time I’m being logical about it because a revolution happened in that country 35 years ago. That’s not a long time ago. It only makes sense that some people in power would try to hold on to that power as long as they can and not let younger people, who on the verge of exploding emotionally get ahead of themselves and rise. They don’t want an intellectual uprising.

What got you started in music?
I grew up in a family that listened to a lot of music. Whatever I could get, from tapes that came from Europe to random stuff, crazy cheesy pop stuff to grunge. Growing up in that family I started to feel the difference between my indoor environment of the house and the outside world. So I started to pick up instruments and create stuff as people do in the MTV shows, basically. I was really fascinated by how someone can generate something, play it on a stage and get people so excited about it.

Around high school I began taking it more seriously and started small local bands. One of the things really bothered us during the early years was that we couldn’t perform anywhere. So we just started learning music indoors and not performing. More recording, more jamming but no performances. Otherwise it was a party for like 20 people in a basement – if it didn’t get busted. 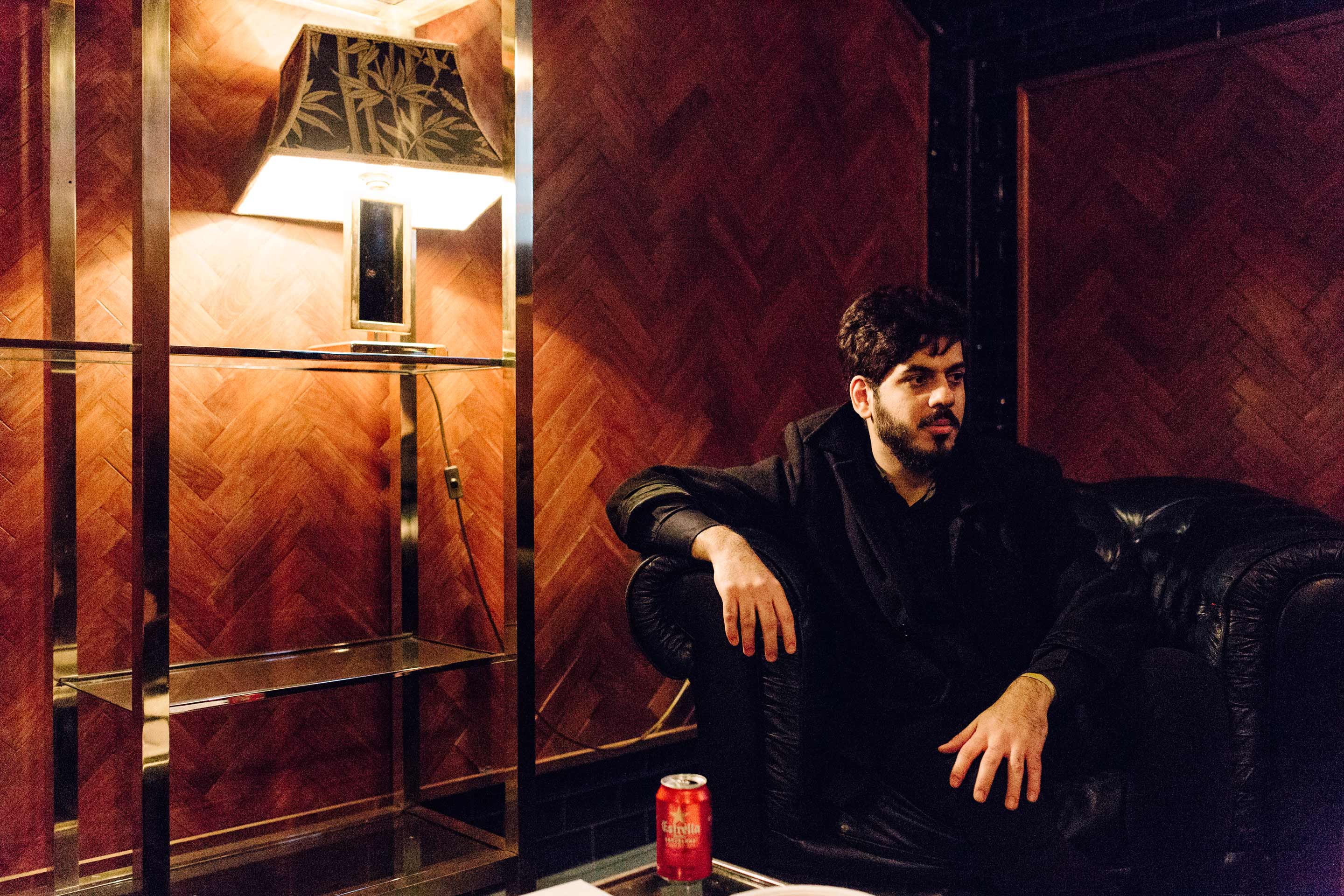 So tell us about the party that got you arrested?
My brother and I started our first serious band and got studio space in Tehran. We felt like we had to put on a show with a proper audience so we invited 150 people and 700 people showed up. We were trying to play smart. There are gardens in the suburbs of Tehran where they do private weddings so the police don’t raid them and we used one of those. I’m glad that we finished the gig but three hours later we heard a helicopter and saw soldiers jumping over the wall and attacking everyone. We got arrested and were sent straight to prison. The local police called the authorities and generals got involved, they sent commandoes – it was a full-on operation, totally unreal. They called it an Israeli-Zionist celebration against the structure of the regime. They thought we were trying to mock them by doing this gig.

Why have you chosen to move away from conventional electronic production techniques?
If I try to stay on the process [with modular synths, for example] my emotions are gone. I’m so interested in spending time with the machine that I forget about myself. That’s why I think electronic music is so cold and machine-like, because the process has taken too long for the artist or composer to let it out. But for me, it has to happen in the moment, so I’ve found this relationship with the computer: I do something, it gives me back something else and I try work around that.

How do you create your sound objects?
That’s what I’ve used in previous albums: nanocomposing. It’s something that helps me understand how to compose with sound objects. I dig into the waveforms and try to get shapes out that are mostly random. I try to control their chaos and control their harmonics to get the right sound. Most of the time I start with recorded sound from my archive, which I’ve recorded over many years. I also use sound banks I find interesting or music. I don’t use synthesisers or digital sounds. I try to use sounds that I can manipulate as much as possible.

How do you go about building an album?
Let’s say for six months I’m deeply focussed on an issue, like the future of humanity, computers, technological singularity or AI, and that goes in the background of my life, whether I do music or film or whatever. That is the core. This new album is all about me finally facing the computer as an entity. I’m also a part of that, that’s why it’s called ‘I also known as I’ or I AKA I, so it’s a mirrored version of myself – I’m reflected in that device. It’s about me dealing with emotions and putting them through the computer and getting something back. It’s our lives, because we have personalities that are built in the virtual world, through our online personas.

How do you integrate the visual element into your performance?
My biggest challenge right now is trying to translate what I see when I make music for you and anyone else. That’s why I was interested in virtual reality. That’s how I wanted to translate the sound objects in a 3D space, in an environment that you can live in while listening to my music. Ideally, you would listen to an album and you wouldn’t know if it was the visuals that were made first or the sound. So you would be immersed in this world where the only visuals are one object around you. So the bass is just rumbling around you and you can look about and live the music.

Have you heard about the condition synaesthesia, where you smell colours and see sounds, etc.?
I discovered I have synaesthesia two years ago after using colours to remember a number my mother was reading to me. She didn’t understand what I was doing and I asked her, ‘Doesn’t everyone see colours with numbers?’ I began reading more about this condition which unites your senses during different points in your life. My synaethesia is focussed around sound but also numbers. I see my postcode with colour and depth of field. But it’s mostly in sound because I practice it more, so that has become my strongest thing: to see sound, to give it some shape.

Why do you want to break down the barriers between sound and visual and turn it into one singular experience?
I struggle with people consuming the type of music that I make because it’s open to a lot of imagination and so many people can see so many different things. Personally, I don’t like that. It’s like when you wake from a dream and you want to explain there was this yellow motorway with purple spheres dropping from the sky, but you can’t explain it. People get like, ‘What are you talking about? We can’t see it. Just explain your dream.’ That bothers me with music, because that sound object that moved from left to right and was stretched – I meant it to be that way. I don’t want you to interpret it into Titanic sinking, I want it to be the way it was.

Ash Koosha’s I AKA I is out now on Ninja Tune. See the full VR experience on June 4 at London’s Institute of Contemporary Arts (ICA).

Linkedin
RELATED ARTICLES
OTHER ARTICLES
AI companies that develop image-generators using copyrighted artwork from the internet are coming under fire from artists who say that it amounts to theft.
At his West Bank restaurant, Fadi Kattan established himself as the voice of modern Palestinian cuisine. Now, he’s bringing his innovative, bold flavours to the UK’s capital.
Filmmaker Laura Poitras discusses her new documentary which traces the remarkable life of the artist-activist and the impact of her battle against the US opioid crisis.
A new law change is enabling Britain’s donor-conceived children to know the truth about their origins – but campaigners say the fertility industry must do more to protect people.
Theo McInnes’s photos of the annual event provide an intriguing snapshot of contemporary Britain.
A new exhibitions brings together the work of photographers who documented the deep unrest of these pivotal decades.