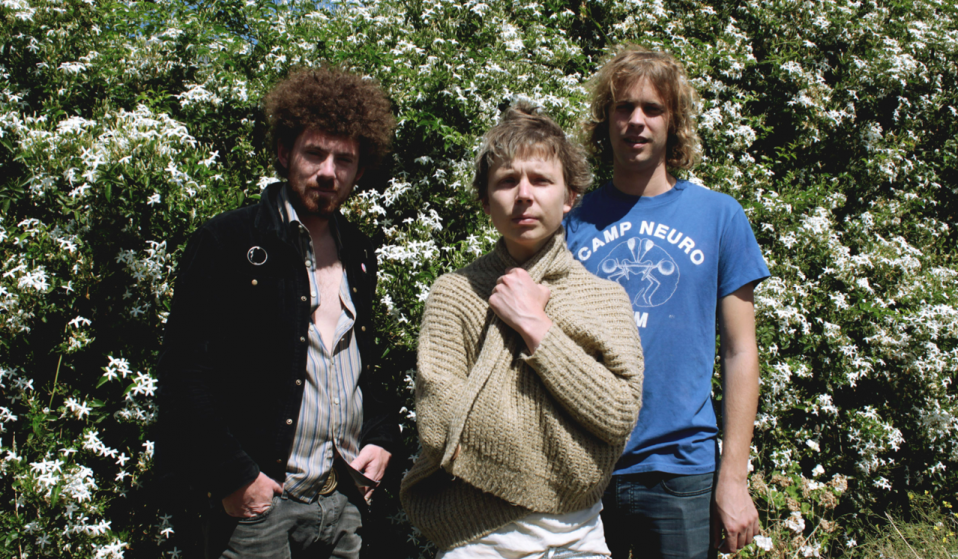 The Perth four-piece chat to us about the different ends of the psychedelic spectrum after their performance at Rough Trade East in London.

The Perth four-piece chat to us about the different ends of the psychedelic spectrum after their performance at Rough Trade East in London.

I’m leaning against the bar sipping a half pint of ale when I see Pond approach The Carpenter’s Arms in East London. As they stroll in through the red velvet curtain, the room comes alive. One of them is wearing a pair of pink sunglasses covered in glitter that frame the gravity defying curls on top of his head. The Australians have just finished playing a show at Brick Lane’s Rough Trade East that was packed to capacity when I got there 30 minutes before they were on but there’s no sense of the band leaving their personas on stage.

The chemistry between Joe Ryan, Jamie Terry, Nick Allbrook and Jay Watson (the current line-up although it’s always changing) is evident from the second we start talking. “We’ll answer as truthfully as we can”, Joe says while doing his best imitation of a person who takes life seriously. “I’m interested in rampant hyperbole,” I say, which leads the band to take turns in rampant hyperbole with Jay suggesting it could go so far as, “The 23rd annual Hyperbowl with Katy Perry at halftime.” It’s easy to feel relaxed around the four of them as they each occupy a different role in the dynamic. Joe and Jay are the band’s extroverts; Nick and Jamie are more reserved.

When the band came out of the late noughties psych scene in Perth, Western Australia, they were not alone. Bands like Tame Impala and Melody’s Echo Chamber are associated with this revival of psychedelia. Look past the obvious names and it’s hard to ignore Allbrook and Ryan’s earlier band Mink Mussel Creek which featured the omnipresent figure of the Perth scene, Kevin Parker. Since then, there’s been an explosion of acts each with a differing take on psych.

Watson adds: “I kind of think of it as anything that makes you feel a bit out of body. Often, for me, it’s like straight pop music. It’s like Savage Garden or some shit.”

Allbrook goes deeper: “It’s anything that gives a moment of transcendence. It could be the Electric Magic Mushroom Band or, like Jay says, Savage Garden. That’s what music does well, it takes you to a different place.”

For me, psych can be defined by the eighth track of their fourth album ‘Moth Wings’. The magnificently titled album Beard, Wives, Denim (2012) was the first time they received a significant amount of mainstream critical attention, scoring a nine out of 10 on NME, and ‘Moth Wings’ was the stand-out track. Since then, it has disappeared from their sets in the sort of recycling that any band naturally does. But why get rid of a fan favourite? Surely, there’s space for it in an encore?

“That’s my song and I hated it for so many years,” Watson says. “I’ve finally stopped hating it because I thought it was really cheesy and lame, then I realised it’s kind of cheesy but it’s not really lame. It doesn’t suck, it’s just weird because each song is a completely different sort of song there’s always one song on each album that’s sort of that over-the-top, funkadelic style and then suddenly you can get a bit embarrassed. If it was any other the other songs on that album that people talked about then I would feel the same way. The same would go for ‘Sun and Sea and You’; that’s a cleverer song but I’m starting to like it again.”

A smile spreads across Ryan’s face at the mention of the word funkadelic. He interrupts Watson to say: “Speaking of funkadelic, this is Parliament.” He then proceeds to do his own one-man jam session while encouraging Watson to start a beef with Blur.

If this is good psych, what does bad psych sound like? “Before Pond and Tame [Impala] got big, when Mink Mussel Creek were playing together, it probably was more serious but it was arguably better,” Watson says. “There probably hasn’t been as good bands since then… I think prior to that stuff, trying to be psychedelic was more pop, not so much Pond, but definitely with Tame it was more pop. Now, if you go to Perth or Melbourne or somewhere, psychedelic music usually means very heavy, riffy blues band with a delay on it.”

Pond’s lack of pretence is refreshing. Their eccentricities are reflected in their dress sense, mannerisms and ability to take a pretty wild tangent of thought and construct something solid around it. Whether musical or a throwaway comment that one of them makes, they will build something around that because they’re always buzzing to come up with something new. It might suggest why they work so well together, even in settings that are 9000 miles away from the west Australian home they still seem relaxed and settled, taking everything in their stride.

Although, I can’t decide if it’s the jet-lag that made them suggest Australia should base its education policy quite heavily on the mathematical benefit of pizza slices, to which Terry suggested: “You can’t go giving kids pizza, they’re fat enough already.”