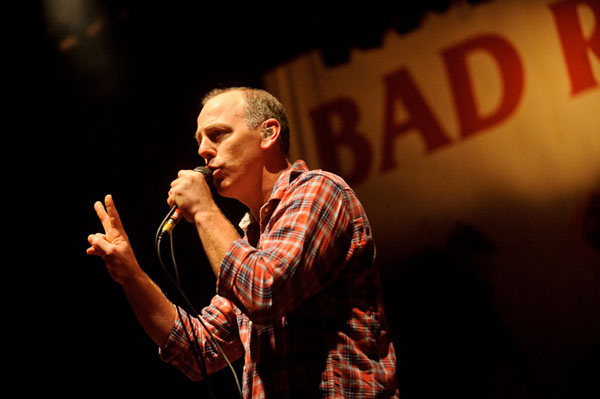 At a time when freedom of thought is under attack, and science is on the back foot, this punk-turned-professor shares some much-needed words of wisdom.

At a time when freedom of thought is under attack, and science is on the back foot, this punk-icon-turned-professor shares some much-needed words of wisdom on why we shouldn't sweat it.

One night in 1980, Bad Religion took over a makeshift stage at a warehouse party in Santa Ana, California, to support fellow fledgling punks Social Distortion.

The ferocity displayed that night, sparked by frustration at the system, would soon put them at the forefront of west-coast hardcore.

Bad Religion would go on to become one of the most adaptive and best-selling punk rock acts of all time.

Thirty seven years later, not only are the members of those two bands still working together, but their message is just as relevant.

Bad Religion frontman Greg Graffin is now an established author and professor in evolutionary science, having branched into other platforms to reach people. But he still can’t resist recording new music.

His third solo album, Millport, is a refined mixture of folk and country reuniting the two songwriters from Bad Religion with the rhythm section of Social Distortion.

The sounds they make may have changed, but the state of the world has not. So at a time of uncertainty and upheaval, this is someone whose perspective is worth tapping into.

Does it feel like the ideas and themes you first explored in Bad Religion still apply all these years later?
Well, it seems like it! We were just teenagers when we made our first output in 1980, writing about presidential elections.

“Election every four years / But neither man we can see or hear / Urgent cries for society / But he can’t see the blood on me.”

That was a song called ‘Oligarchy’ and today we’re still talking about oligarchies and bad presidents. [laughs]

Some people see our work as political but really it’s just philosophical. The themes driving current events tend to be timeless and I think that makes them good fodder for music.

We’re speaking as Trump is just taking office. Do you think America could regress under his leadership?
No. I’ve lived under a lot of bad presidents. When you get a little older, you start to see it with perspective.

In four years, I don’t believe it’s possible to bring down the traditions and universalities of the United States.

I mean, yeah, it’s not really a hopeful four years we’re looking forward to… but we also have to remember that a lot of the stuff people are saying right now has been said about other presidents.

Ultimately it remains to be seen what this president can accomplish. He made promises he can’t keep just to appease a certain sector of America, so I suspect he’s going to become useless as an administrator.

With Obama’s legacy, the Republicans all accused him of not getting anything done. Wait ’til you see how little this guy is going to get done. 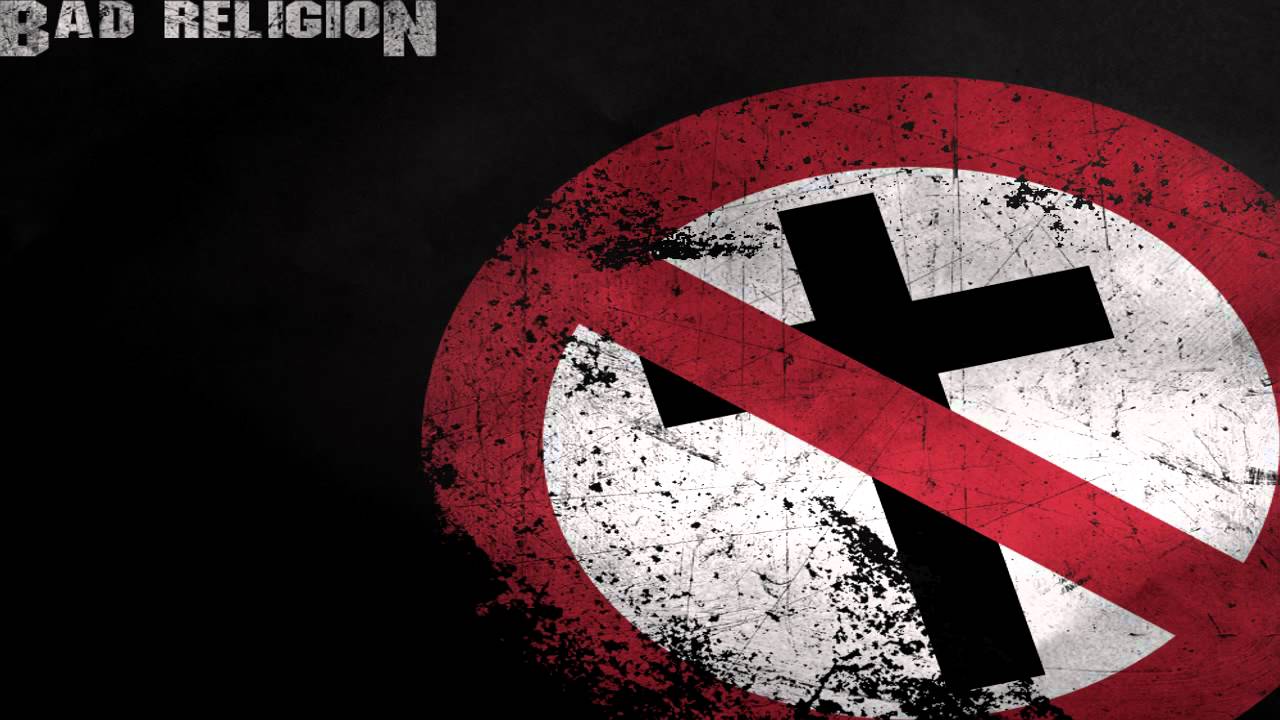 As a professor, you lecture about life sciences and palaeontology. How do you think that mission will change over the next four years? There’s a lot of fear around climate change denial and the strength of conservative, religious values…
Well, don’t forget that when Bad Religion got our start it was under a very conservative administration and the religious right was just as vocal then as they are now. That was what led to the name Bad Religion!

Guys like Jerry Falwell and other televangelists were preaching nonsense, really, so we’ve seen it before and it didn’t have a big effect on the teaching of science.

Science continues to progress. As much as the right wing likes to say that they’re sensitive to the religious right, they’re also sensitive to science and technology.

Climate change denial is a term that’s thrown around a lot but when it comes down to it, all those [politicians] are being advised by scientists who know better.

Now, the EPA [Environmental Protection Agency] and the funding for research in basic science is a concern, but that’s not going to shake the structure of scientific education or the fundamentals that we all depend on, so I’m not worried about it.

Is it considered radical to be an evolutionist in America today?
[laughs] No, not at all. There are plenty of people who deny evolution, sure, but America’s a huge place.

Those people would probably stick out like a sore thumb in the UK, whereas over here they can fit in very well within certain communities.

In fact there’s even a museum for creation science in Kentucky – a fully fledged and funded museum showing dinosaurs walking around with cavemen. Completely fantastical!

Those kind of things can exist in a vacuum in the US but here’s the thing: I feel like if you get a kid interested in dinosaurs then they’re quickly going to figure out that dinosaurs lived in a different time than cavemen, so maybe it’s not that alarming.

What is alarming is not introducing kids to science and nature. That is a terrible problem all over the world.

Kids are spending more time looking at screens than they are going outdoors. To me, that’s the biggest crime because once you do introduce children to the wonders of nature, it immediately engages them in science.

In the bigger picture, what can we do as individuals to foster coexistence in such a divisive climate?

Last year I published a book called Population Wars and although parts of it are pretty biologically dense, the basic proposition is a new perspective on evolution.

There’s plenty of data suggesting that symbiosis is just as important in evolution. So how can we get away from this combativeness and obsession with warfare?

Part of the answer is to not just default to the basic assumption: that everything is the way it is because of some natural law that favours competition.

What you can do instead is consider history. Think about how all this came to be; think differently about why certain things persist and other things die out.

The short version of this answer is that we need to ask more questions.

Do you think that the punk image has endured better than the ideals behind it?
Has there been a disconnect? To some degree. But you have to remember that punk started out as a fashion movement. By 1980, when we came along, I couldn’t care less what people looked like.

I was just this kid who loved to be part of the social scene and it was fun having people dressed in punk costumes – but I didn’t have the money, quite frankly, to look like that.

You had to get your hair done, you had to buy dye; getting some engineer boots would cost you 100 bucks, leather jackets even more.

Where was I going to get that? My parents were divorced, so I didn’t have any of dad’s old clothes to throw on.

In the early pictures, all you’ll see me with is a torn up t-shirt. But on my 17th birthday, my grandmother actually bought me my first leather jacket. My grandma!

I promptly punctured it with holes, put spikes in it and spray painted it – ‘and there goes that beautiful leather’. [laughs]

What can you tell me about that first concert with Social Distortion in California, over 36 years ago? What do you remember about that night?
I was 15 years old and kind of scared. But at that point everything feels like it’s the start of something special.

You never forget your first words into a microphone – and mine were, ‘Here’s Bad Religion.’

No one heard me so I said, ‘We are Bad Religion’ …and everyone continued to drink their beer. [laughs] That was a nerve-wracking experience but it felt great.

You’re still working with these guys today, so what do you think has kept you together?
Honestly, it’s the love of music. It’s not the controversy, it’s not coming from the wrong side of the tracks… it’s the ability to play music and get better at it.

There’s also a similar strain of influences among those guys. We loved the same music growing up and it’s fascinating to think that we’re still playing it.

All my punk styles go back to stuff that was introduced by my family: the roots of Americana.

Ultimately all music is an escape: a wonderful sharing activity that anyone can join in.

The thought of music being controversial is kind of annoying to me, honestly.

I’m an educated university man, so I’ve always thought the best place for controversy is in debate and in bringing up things that can have some resolution – not just being nihilistic and confrontational for the sake of it.

For me, punk was an attempt to raise awareness – and that’s an extension of my teaching to this day.

When I do solo work, it’s still raising awareness – but of the great tradition of music.

Millport is out through ANTI- on 10 March.

Linkedin
RELATED ARTICLES
OTHER ARTICLES
Social prescribing connects people with non-medical support to improve their health and wellbeing – but some experts worry it’s just a stick plaster solution.
AI companies that develop image-generators using copyrighted artwork from the internet are coming under fire from artists who say that it amounts to theft.
After blocking the Scottish government’s gender recognition reform bill, Westminster is now devising further changes to the law to make it harder for trans people to self-identify.
After building his reputation covering the US civil rights movement in the 1960s, the photographer went on to produce some of the most enduring images of the past century.
Photographer Becky Tyrell went down to the fading banger and stock raceway to meet a community desperate to keep it alive.
Activists and campaigners are fighting back against new laws that would seriously undermine the ability to take industrial action, calling it an attack on fundamental workers' rights.