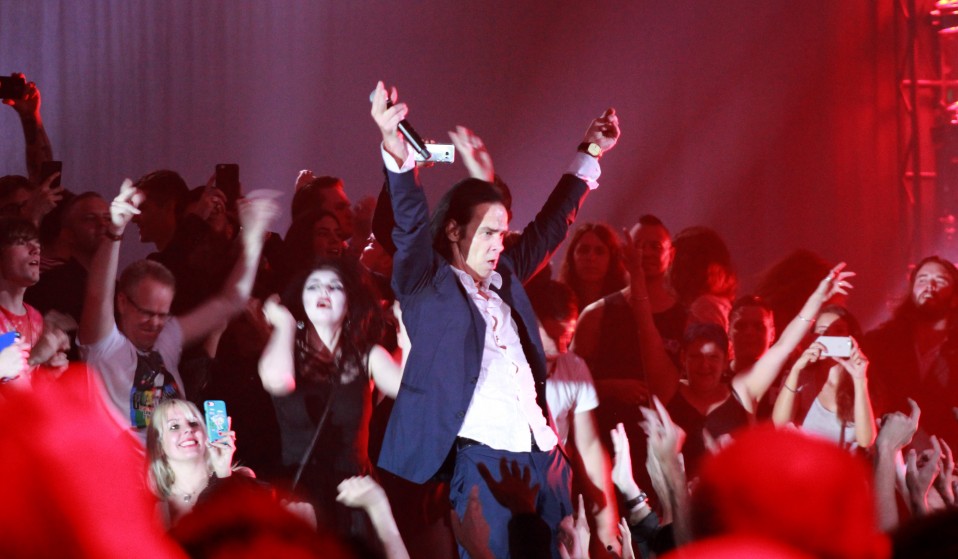 As the legendary band round off the biggest tour of their career, we catch up with drummer Jim Sclavunos to discuss progress, punch-ups, and the ‘pornography of violence.’

As the legendary band round off the biggest tour of their career, we catch up with drummer Jim Sclavunos to discuss progress, punch-ups, and the ‘pornography of violence.’

Sitting in a Nottingham hotel bar sipping a gin and tonic with a suit so crisp and pristine it sparkles almost as brightly as his polished shoes, Nick Cave & the Bad Seeds’ Jim Sclavunos cuts a different figure to the one on stage hours later: suit jacket removed, sleeves rolled up and droplets of sweat firing back into his face as he mercilessly pounds the snare drum during a frenzied and visceral take of “Stagger Lee.”

The song in question is a traditional folk number, with numerous versions being recorded over the last century. It’s been a central song to the band’s live show for years, usually a closing number in which the tale of bloody murder is spat out by Cave with seething venom, as Sclavunos attacks his drums to replicate the sound of gunshots being entered into a bar keeper’s head, before the whole song erupts into a cacophony of screeching noise.

On the band’s current tour, Cave has been encouraging the crowd to join him on stage for it. In Manchester, a young boy rather disturbingly sings every word, while in Nottingham a crowd so large has engulfed the stage that Cave is forced to spend most of the song prowling the audience.

The song was something Sclavunos (percussion, drums, backing vocals) brought to the band after the Murder Ballads recording sessions. He found the song in a book of prison poetry and passed on the “particularly violent and obscene” version of it to Cave.

The album by this stage was finished and they were just laying down Kylie Minogue’s final vocals for “Where The Wild Roses Grow” in a London studio but Cave was so enamoured by the “pornography of violence” that they recorded something on the spot. It took two takes and was merely an afterthought but over twenty-years on it has thousands of people in arenas screaming, enthralled by its filthy and riotous delivery.

Sclavunos was initially brought in as a Bad Seed in 1994 to flesh out the percussive elements of the album they were touring, Let Love In. “They needed someone to ring the bells, they needed a hunchback,” he says with a modest laugh.

Prior to joining, he was in groups such as Teenage Jesus & the Jerks, The Cramps and Sonic Youth. However, the Bad Seeds picked him up at just the right time. “I had quit all my other bands and was down on my luck and back in New York with my tail between my legs thinking this music malarkey is not working out for me.” 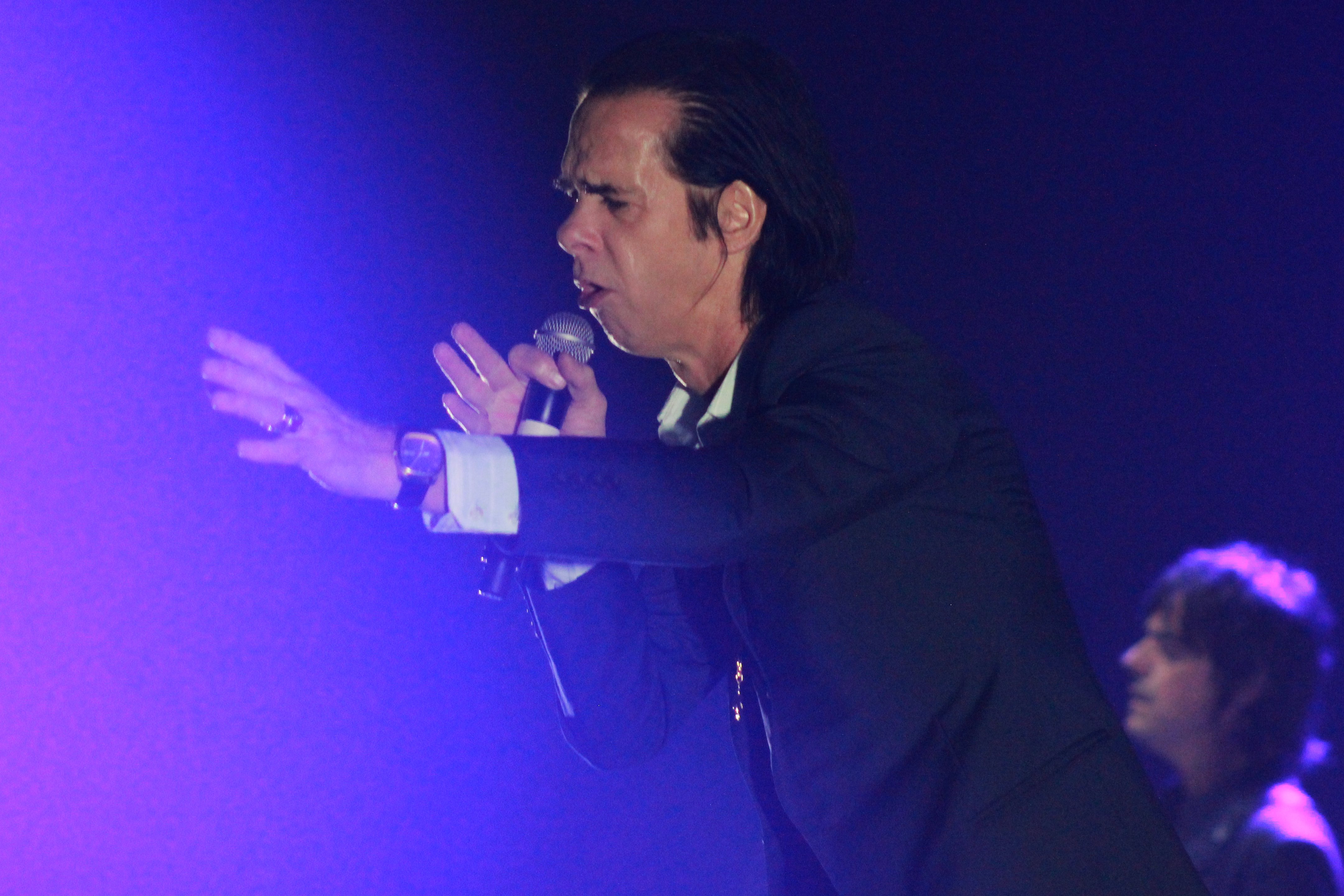 The band, almost 35 years since they formed, are at the height of their popularity, playing their largest ever shows on the back of arguably their quietest ever album in 2016’s Skeleton Tree. A strange position to find yourself in, one presumes – but Sclavunos disagrees.

“It’s not strange. I always felt like the band could have a broader appeal that it was allowing itself to or that labels had faith in. Nobody inhibited our career or anything, but it baffled me why more people didn’t like the band.”

“Granted, it’s not a commercial band and the last album is as difficult as any that we’ve made, but I think it’s a statement about how open audiences can be, that an album like that could do well and lead to arena shows. I think people underestimate the public appetite for music that might not be so obvious. Why shouldn’t we play arenas?”

The biggest concern perhaps for many was not the why but the how; how would the band transcend the quiet force of some of their slower, weirder, more intimate moments – as Skeleton Tree is filled with – into a huge sonorous building. “It’s been scaled up to work that way. We wanted to make it a bigger thing,” he replies.

It’s unquestionably been a successful transition and the band sound as powerful as they do intimate, piano ballads glide into twisted voodoo rhythms which mutate into erratic, explosive bursts and then back again, often with Cave locked into the clasping hands of the audience.

“Interaction is a really important element for these shows,” Sclavunos says. “We want to make that connection and Nick is the conduit through which that can happen. He has to be in amongst the audience to ensure that we’re not just presenting some big spectacle on stage and you have to just sit and passively watch.”

Given that in the past the Bad Seeds, by name alone, conjure up associations of violence, drugs and savage, chaotic intensity, is life in the band harmonious these days? Sclavunos almost spits gin out of his mouth with laughter. “Well… I think the older we get the less we can be bothered being disharmonious,” he says, again breaking into laughter.

Mentioning an old interview Sclavunos and Cave did in which they talk about bass player, Martyn Casey, with a sort of reverential fear – with Cave adding that, from experience, he’s not someone you want to be punched by – asks the question if any fists still fly in the Bad Seeds camp? “I guess you just get tired of punching each other,” Sclavunos says, “The novelty wears off.”

Linkedin
RELATED ARTICLES
OTHER ARTICLES
A young woman recounts her experience of being harassed by anti-choice campaigners as she was seeking an abortion in Glasgow.
Susan Pektaş’s new photo series delves into multiple cultural layers of the region with a touch of personal mysticism.
Following the release of his latest album, the rapper talks about finding a new approach to songwriting, attitudes to poverty, and why his music is more than a political statement.
We introduce our series spotlighting the voices of people who’ve been impacted by anti-abortion laws and anti-choice protestors.
Photographer Bud Glick recounts documenting everyday life in the area, and what it taught him about the Chinese immigrant experience.
Last week, Tower Hamlets council removed its nudity-restricting licensing conditions in a huge win for London’s kink community.