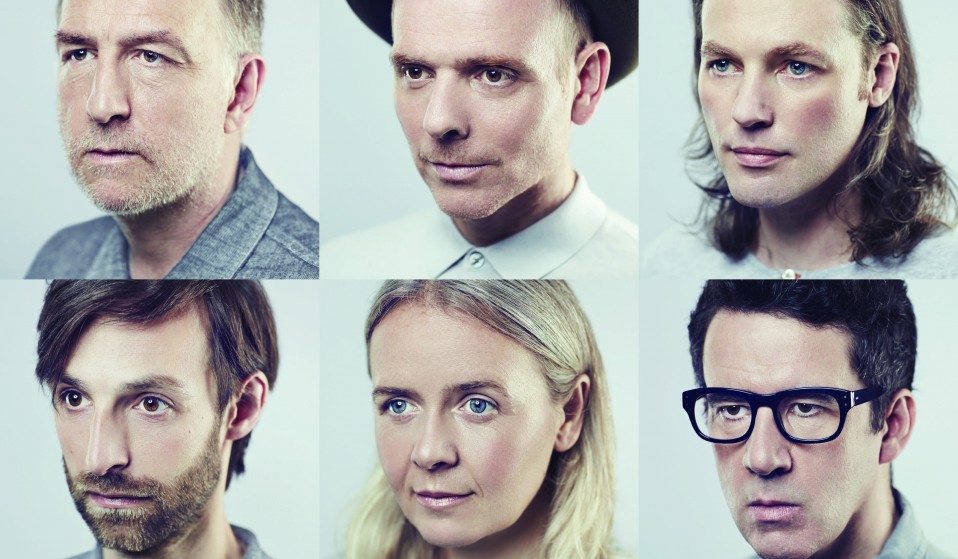 With an EP trilogy on the way and a European tour to follow, we caught up with Stuart Murdoch from the band to discuss keeping peace of mind among the chaos.

With an EP trilogy on the way and a European tour to follow, we caught up with Stuart Murdoch from the band to discuss peace of mind among the chaos.

Stuart Murdoch of Belle and Sebastian is sat on a bus, slowly making his through a damp Glasgow morning.

Though it’s hard to put your finger on why, there’s something oddly fitting about the idea of the soft-spoken frontman sat on the top deck, peering out into the grey as raindrops line up to race each other down the window. It’s the kind of image you’d probably soundtrack with one of his tunes, were you in charge of the scene. “It does actually help with the songwriting,” he says, with a chuckle.

As the lead singer and songwriter of the seminal Scottish band, Murdoch is synonymous with all that is good, right and pure in music. Since announcing themselves to the world with debut full-length album Tigermilk back in 1996, Belle and Sebastian have spent the past two decades bouncing from release to equally-lovely release, leaving in their wake a collection of warm and jaunty numbers that never seem to age. While they’ve experimented with different sounds (lo-fi, folk, pop, dance, etc), their vast discography is united by one single point of common reference: a Belle and Sebastian song will always – always – make you feel nice afterwards.

Today, Murdoch inhabits the role of indie-pop professor with natural, self-deprecating charm. He is, after all, conducting an interview on the bus. At the beginning of October, the band announced a new EP trilogy, under the umbrella title of How To Solve Human Problems; Scheduled to drop in December, January and February respectively, it’s indicative of a band known for switching things up. Speaking over the phone as he journeys through the city, it’s clear that the frontman still relishes the prospect of trying something new. “We said that anything goes, we didn’t have any rules,” he admits.

With the release of the EP’s first instalment only a month away – and a European tour kicking off early next year – it’s certainly a busy time to be Stuart Murdoch, but he doesn’t seem flustered – nor particularly phased. As he journeys through the city, he discusses the forthcoming release with the glee of a rosy-cheeked first-timer. Despite the rain, it’s going to be a good day.

Why did you decide to go with a trio of EPs, rather than a single album?
Every five or ten years or so – I mean, we’ve been going for quite a while – we sort of get bored and try something different. It’s not so much the way that the thing comes out, it’s more that we like to change the way that we work and write and produce the record. I tried writing with different people and tried having different singers, we tried producing ourselves. I think overall there’s a wider variety of styles and sounds over the course of the three records.

It must have been quite liberating.
Definitely. I think you always have to be liberated. Not just us musicians. You should do whatever you can to be liberated every morning when you wake up. Do something different, change your habits.

Belle and Sebastian have become known for that – switching things up, trying new ideas.
Yeah, totally. I mean, people keep giving us money to make our soppy little records [laughs]. Some people question the different styles and different methods, but then, you know, our fans seem to like them and show up at the concerts.

What’s really great is dropping the new songs into the set. We get away with playing songs from Tigermilk and we get away with playing the last single, even though the styles are vastly different. Crowds these days, they have a more catholic taste. People are used to listening to individual tracks, people are used to going onto Spotify and listening to very different styles of music. People can dig it.

The title of the EPs, How To Solve Human Problems, is that responding to the current political climate?
It may seem like that, but it wasn’t really my intention. In fact, it was probably my intention to do just the opposite. The title actually comes from a Buddhist book. I’ve been exploring Buddhism in the past two or three years and I quite like the suggested Buddhist way of going about things, to try not to worry about what is happening in the world so much and [instead] concentrate on what’s happening with yourself and the people around you. I think it’s empowering – you can make things better for yourself and the things around you.

So, you’re saying to focus specifically on the areas in which you can have an impact?
You can actually confront the so-called problems much more practically if you have a clear mind. Anger is such a waste of time. If you have this clear mind, then you can do something practical – maybe in your neighbourhood, maybe in local politics – rather than just throwing things at the television and getting mad at the world in general. That’s not gonna do anybody any good. I’m saying you shouldn’t be a doormat, you can be active. Just do it where it counts.

I see. So, how are you feeling ahead of the first EP coming out? Has that pre-release feeling changed as you’ve grown older?
It’s a good question. I actually had breakfast with Sarah [from the band] this morning and I was saying it’s a little bit like when you’re a kid and you look forward to Christmas… when you get older, you really couldn’t care less [laughs].

When you release an album, it builds up to the release, then it’s always vaguely disappointing. You get a couple of seven out of tens, eight out of tens, then… nothing happens. Once the punters hear the music and it’s on the radio, the pressure’s off. People have decided already whether they like it or not, so it doesn’t really matter. Because we’re dropping the music gradually, people actually get a chance to hear the music first and see whether they like it before condemning. With [the EPs], it’s an easier way to digest music.

Your fans are famously protective over particular releases and moments in the Belle and Sebastian timeline. What’s your take on that?
Yeah, I know what it’s like myself to be a fan of music and to hold particular LPs and ages of music dear, so it’s fun to be part of that. It’s fun to be in a position where we’ve been around for a while and there’s still people out there that care.

Which bands did you feel that affinity towards?
I used to DJ in clubs all the time and follow bands around. There were certain bands like the Go-Betweens and New Order; Felt and the Cocteau Twins and The Smiths, The Fall. I was very, very keen on them.

You’re fairly unapologetic about the fact that, nowadays, you don’t actually listen to much music.
When you’re actually making an LP – producing an LP – what you’re actually listening to is Belle and Sebastian. You’re working hard on that music. Sometimes, the most beautiful sound that you can hear when you’ve finished working is the sound of silence. Those times to empty your mind. It’s the same as eating all the time or smoking all the time – the pleasure has to be diminished, surely.

You’ve been doing this for 20 years. Have fans who were with you at the beginning started bringing their kids to shows yet?
It makes me think of something Ian Dury said. He liked the idea of whole families coming to see The Blockheads; grannies coming to see them; weird uncles; dogs. But yeah, we get a whole spread of society – I think because of the way people listen to music these days. You get young kids coming in, sons and daughters – we get some grannies as well. We don’t get many dogs.

When people think of Belle and Sebastian, they tend to think of positivity. Are you a positive bunch?
I guess we never tried to set ourselves apart from the people that came to the gigs. For that reason, a community grew up around the group. We used to get a very hard time from the likes of the NME – they didn’t like us at all, cos in their minds popstars should always be special beings. But you can’t act like you’re in the Rolling Stones if you’re not. You’re not gonna get anywhere in the long-run.

Do you think there’ll ever be a time when you’re not doing this?
It’s another good question. It’s good to have a break and have some time off. We’re gonna see how this year goes. If a project arises that we’d really like to get into, then we’ll get into it together. But one of these days I’m gonna take time off and write a book about something. So maybe next year will be a good time to do it.

Linkedin
RELATED ARTICLES
OTHER ARTICLES
A new film from Berghaus traces the story of Adam Raja, who left behind a turbulent upbringing to discover the healing power of climbing.
Social prescribing connects people with non-medical support to improve their health and wellbeing – but some experts worry it’s just a stick plaster solution.
Photographer Sean Maung reflects on documenting a small town in Pennsylvania afflicted by high levels of unemployment, poverty, violence, crime, and addiction.
After blocking the Scottish government’s gender recognition reform bill, Westminster is now devising further changes to the law to make it harder for trans people to self-identify.
Photographer Becky Tyrell went down to the fading banger and stock raceway to meet a community desperate to keep it alive.
Filmmaker Laura Poitras discusses her new documentary which traces the remarkable life of the artist-activist and the impact of her battle against the US opioid crisis.