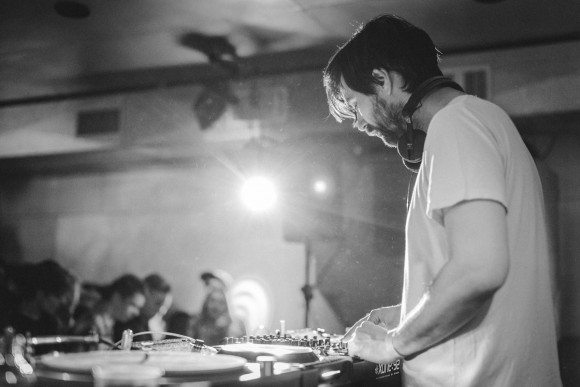 Hedonism and hard work in Berlin, 25 years after the fall of the Wall.

Hedonism and hard work in Berlin, 25 years after the fall of the Wall.

Compared to living in the UK, Berlin is very liberating, like someone has erased all the rules and you can do whatever you want. Everything is cheap, pubs never shut and you can pretty much get away with anything.

I moved here a few years ago from London to record a joint album for Modeselektor. They had just started up their 50 Weapons label and wanted me and Doc Daneeka to do a joint album. They kept waiting for us to send them music but in the end just got fed up and decided we needed to go to Berlin. They set us up this amazing Charlottenburg apartment and let us use their big studio for 10 weeks.

We did the opposite of what most young creative people do in Berlin and worked harder than we’d ever done before. It’s a very transient city. People come and go very quickly. A lot of writers, artists and musicians come here to realise their dreams but just party solidly for three months and leave when they run out of money.

As we were finishing the album I knew I didn’t want to go back to London. Berlin is a much freer city in every way. It’s almost impossible to get into trouble here. The idea of closing times and curfews seems so ridiculously authoritarian now. People have a certain amount of respect here regardless of who they are, what they’ve achieved and how much money they’ve got.

We got back to Berlin after the They!Live album was finished and started moving all our friends out straight away. We found a two-bedroom apartment right on the border of Kreuzberg and Neukölln and filled it up with as many people as we could. There was even a guy who was quite happy to sleep in an inflatable boat. We let him stay in the hall for six months. You can make your own reality in Berlin and nobody tells you to stop.

There are lots of little scenes and loads of musicians here. Techno is deeply ingrained into Berlin. Older people talk about how it united the Wessies and Ossies after the wall came down. There are so many old clubs and parties that are called ‘legendary’, and while I’m sure they were it doesn’t really mean anything to you if you weren’t there at the time. There’s always a new influx of people into Berlin and everybody has their own golden era. Right now the golden era is Berghain, the greatest club in the world for techno music. It has the best artists, sound system and atmosphere. It’s a place that could only exist in Berlin.

The constant change I find really refreshing. New scenes come and go with the flow of people. Nothing is allowed to get stale, the energy is always refreshed.

You can check out Benjamin Damage at his Facebook and Soundcloud.

Linkedin
RELATED ARTICLES
OTHER ARTICLES
An enduring inspiration?
Berlin-based pensioner Irmela Mensah Schramm is on a one-woman crusade against fascist propaganda.
Body art is going avant-garde, thanks to a new generation of Berlin-based tattooists who see a canvas where others see skin.