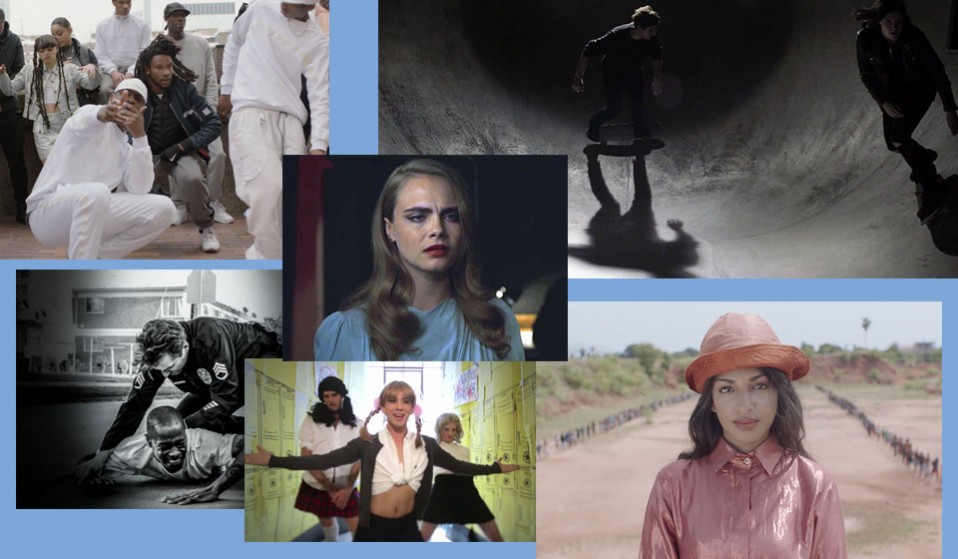 Police brutality, domestic violence, the refugee crisis, dad dancing and hallucinogenic drug experiences were all explored in the music cinematography of the past year.

Police brutality, domestic violence, the refugee crisis, dad dancing and hallucinogenic drug experiences were all explored in the music cinematography of the past year.

It was quite a political year for music videos with the refugee crisis, police brutality and domestic violence all presented in creative and thought-provoking new ways. As ever, music videos provided the perfect platform for directors to experiment and there was trippy cinematography, graphics and CGI in equal measures. Although, sometimes, it transpired, the most moving footage is simply the portrait of a pained face or the raw footage from a club. Here are some of our favourites. Enjoy.

A 16.33-minute self-directed video that comprises four songs off Twigs’ EP – ‘Figure 8’, ‘I’m Your Doll’, ‘In Time’ and ‘Glass & Patron’ – and cements the British artist as the auteur of a new cyber-goth aesthetic. Chris Cunningham watch out.

Romy and Jamie from The XX skate around London in this atmospheric night edit from Simon Halsall and JB Babenhausen. An ode to the hidden corners of the city and the people who experience them.

Rocky and Dexter Navy collaborated on this kaleidoscopic visual soundtrack to trippy anthem L$D. Shot in Japan the hallucinogenic cinematography bears more than a striking resemblance to Gasper Noe’s Enter The Void.

A controversial self-directed video from British artist MIA that stylises the difficult imagery of the European refugee crisis – fences, barbed wire, boats, faceless people – and brings the horror into a new light.

Donnie Trumpet & The Social Experiment – Nothing Came To Me

I dare you to try and not fall in love with Cara Delevingne’s face in this experimental video from Donnie Trumpet & The Social Experiment, a super group consisting of Donnie Trumpet, Chance The Rapper, Peter Cottontale, Greg Landfair Jr. and Nate Fox.

An ingenious montage of iconic music videos recreated, quite accurately, in a lo-fi way; the walls of the Jamiroquai ‘Virtual Reality’ room and lockers of Britney’s ‘Hit Me Baby’ all made out of paper, for example.

This is for my ravers! Craig David’s unexpected tie-up with Big Narstie is right up there with the our guiltiest pleasures of the year. Re-rewind! Re-rewind!

A tribute to the London architecture, fashion and grime scene that has propelled Skepta into international recognition, directed by Grace La Doja.

A white cop and an unarmed civilian fight in this delicately choreographed and disturbing video directed by A.G. ROJAS, dealing with the very-real issue of institutional racism and violence in the US police force.

If you haven’t got Kendrick Lamar’s video for ‘Alright’ on your best of year list, what are you smoking? The Compton rapper’s trippy but poignant monochrome video confronts police brutality with a message of power and hope.

Musically, it might be way off Bowie’s best, but his 10 minute surreal epic video for ‘Blackstar’ is so far-out it’s brilliant.

Tame Impala – The Less I know The Better

Sam Shepherd aka Floating Points’ debut album //Elaenia expands on the immersive, minimal soundscapes he’s been putting out for years. This video for lead single ‘Silhouettes’ brilliantly captures the dreamlike aura of his music.

Artists are always trying to reveal what’s going on in their heads, but few have taken the task quite so literally as Björk, whose video for Mouth Mantra is filmed almost entirely inside her own mouth.

Drake’s video for Hotline Bling was one of the most widely mocked videos of the year – thanks to the Canadian’s rappers original dance moves. Predictably, the internet had a field day ripping it to shreds. Here are some of the best pisstakes.

Son Lux – Change is Everything

Who knew 200 push pins and 500 feet of rubberised thread could be so emotional? Totally breathtaking stop-motion work by animator Nathan Jones transforms both the song and the visuals into something far greater than its parts: a work of synchronised music video art.

Linkedin
RELATED ARTICLES
OTHER ARTICLES
The world's elite has descended on Miami, where the sun shines bright and art is currency.
We ask frontman Zac Carper of LA punk band FIDLAR a question inspired by every track on their new album Too.
Tame Impala music flows out of Kevin Parker’s wizard mind and fills the world with surprise psych fans.