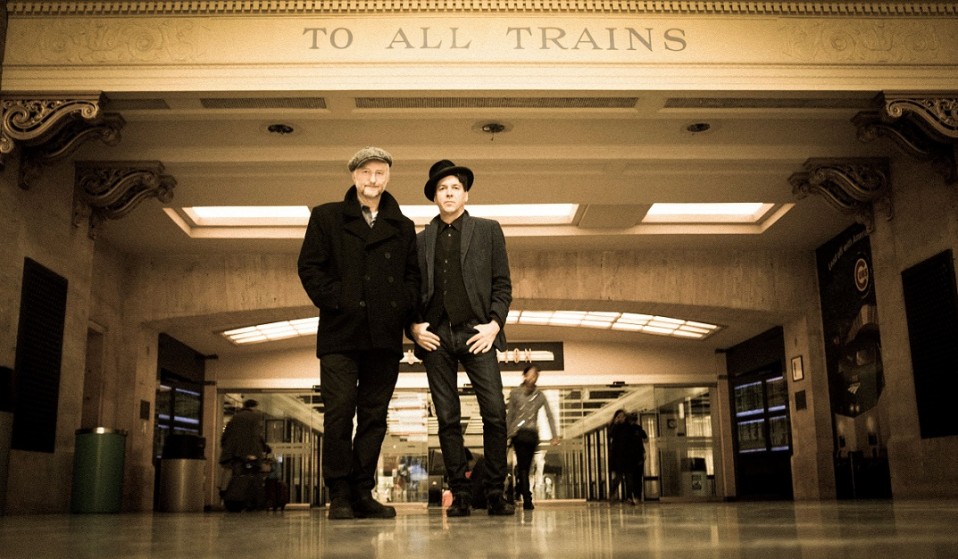 When Billy Bragg and Joe Henry set out on their American railroad adventure, they planned to record great American folksongs in the stops along the way. What was unexpected, however, was quite how relevant they'd be today.

When Billy Bragg and Joe Henry set out on their American railroad adventure, they planned to record great American folksongs in the stops along the way. What was unexpected, however, was quite how relevant they'd be today.

“It might be because I’m a foreigner in the States,” Billy Bragg  jokes as we meet in a swanky central London hotel lobby, “but I’ve always wanted to know what it is about the railroad, particularly the American railroad, that holds people’s sense of imagination.”

I follow him down a lobby before taking a seat at a small table in the hotel’s quiet bar, where Joe Henry – American musician and Grammy award winning producer – sits patiently waiting. They’ve just released their new collaborative album Shine A Light, Field Recordings from the Great American Railroad, and I’m their last interviewer of the day.

Say the word “railway” in the United Kingdom, in 2016, and no doubt you’ll be greeted with a barrage of rants about over-priced tickets, cancellations and whether or not it’s possible to find a standard class seat on the 11am Kings Cross departure to Newcastle.

Across the pond however, where far fewer people rely today on inter-city rail travel, the railroad retains a romantic sensibility. “The railroad is a metaphor for loss, for love, for conflict and for freedom”, Billy says.

It was the railway that saw the Wild West “tamed” and settled, that pushed forward the industrial revolution of the North-East, that made inter-city travel across this vast nation a possibility.

It’s for this reason that so much great music sings to the railway too: Woody Guthrie’s Hobo’s Lullaby, Midnight Special made famous by Louisiana legend Lead Belly back in the early 1900s to name a few. Inspired by these great anthems, Billy and Joe decided to set out on their own great American rail trip.

Setting off from Chicago, Billy and Joe travelled to Los Angeles by train, their 65-hour journey crisscrossing through the heart of America. Over just four days the pair, alongside their sound engineer and two guys tasked with filming, recored an album of old railroad songs, played in the waiting rooms and on the platforms of the stations they passed through along the way.

Kicking back as an engine speeds across the land of the free might well still invoke dreams of endless possibility, but travelling the Sunset Limited line, a passenger train that departs from New Orleans, following the American-Mexico border pulling into Los Angeles some 24 hours later, the guys were confronted with a sight that was somewhat less liberating.

“The railroad goes to places that were important 100 years ago between the big cities,” explains Billy. “Places that are often forgotten now.”

“When we were travelling along the Mexican border, there was a moment in El Paso, Texas that really made me think,” chimes in Joe. In some places they travelled through, the border between Mexico and the US was closer than the train’s reception, and he was keen to share an example.

“When we were pulling out of El Paso heading to Los Angeles on the last travel day, I was standing facing forward between two cars. I looked out to my right side and there’s this sprawl of suburban El Paso, brand new houses with 4x4s parked outside.” To Joe’s left was Juárez, Mexico, a city that looked to him two centuries behind. 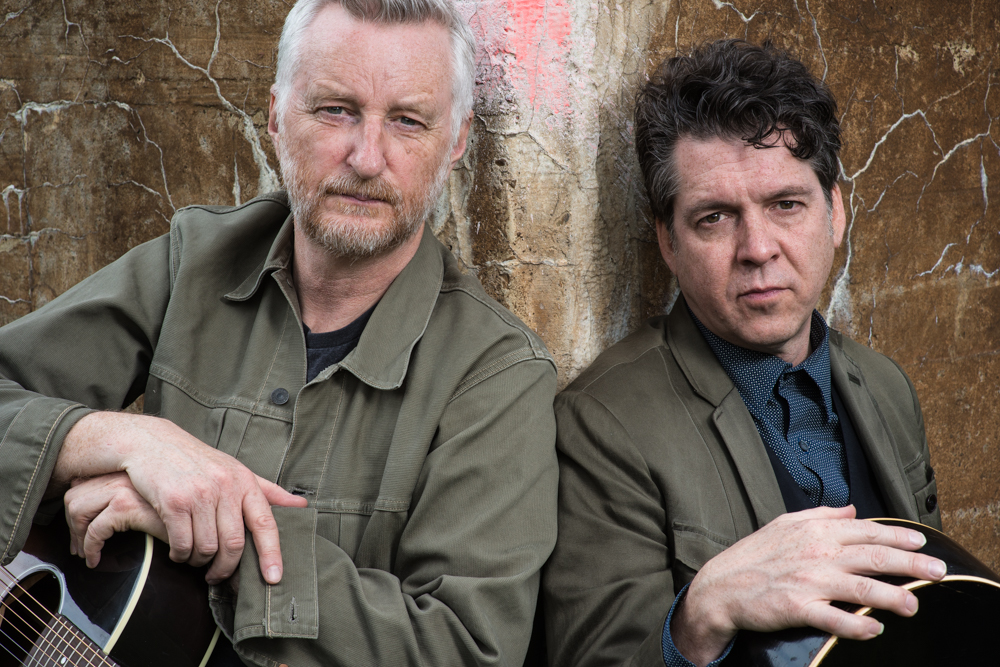 “I was literally right there and thinking, we have constructed this line. If you’re up in space you don’t look down and see a division of humanity between America and Mexico but we created one,” he continues. Billy nods in agreement.

The absurdity of borders, the notion that life chances and access to resources that fulfil the most basic of human needs should be dictated by which plot of land you happen to be born is, is a topic that deserves our attention at the best of times.

“We were all thinking the same thing,” adds Billy. “That’s where Trump’s going to build his wall.”

The railroad might still offer up opportunity for travel and adventure, but cutting through these border towns was a stark reminder for both of these musicians that to some, the possibility that the railroad offers remains very much out of reach, and that dates attitudes all too prevalent when the tracks were first laid continue to shape and divide America.

“When we were pulling out of El Paso, it wasn’t long before we were speeding through the country, and out there I spotted this big hill”, says Joe, speaking slowly, looking directly at me. “There’s like a rail marshall up on the hill, watching to make sure that locals from Juárez aren’t making a run to jump into the undercarriage of the train.” From where Joe was sitting, it looked like this marshall was armed.

“Here is this picture of desperation,” he continues, “but also a sense of possibility that this line creates.”

Billy and Joe are no strangers to making music that’s political. Half an hour into our meeting we’d happily jumped from American folk songs to contemporary British politics without a PR interruption or a “I don’t know about that” or “can we just talk about the record?” response from Billy or Joe. It’s a noticeably different set up to how many younger musicians decide to handle politics and the press.

“I think you have to accept that music has lost its vanguard role in our culture,” suggests Billy, when I ask why even those artists who might tweet about the refugee crisis seem unwilling to make music that takes on the establishment. Sure, there’s Beyonce, MIA and others, but it’s far from being the norm.

“In the 20th century music was the only social medium we had,” he continues. “If you wanted to know what your generation thought you’d go a record store, you’d buy the NME.”

“Now if you want to know what your generation thinks, you go to Facebook, you go to Twitter, you go to Huck. Losing that role in opinion-forming means it’s turned back into pure entertainment.” 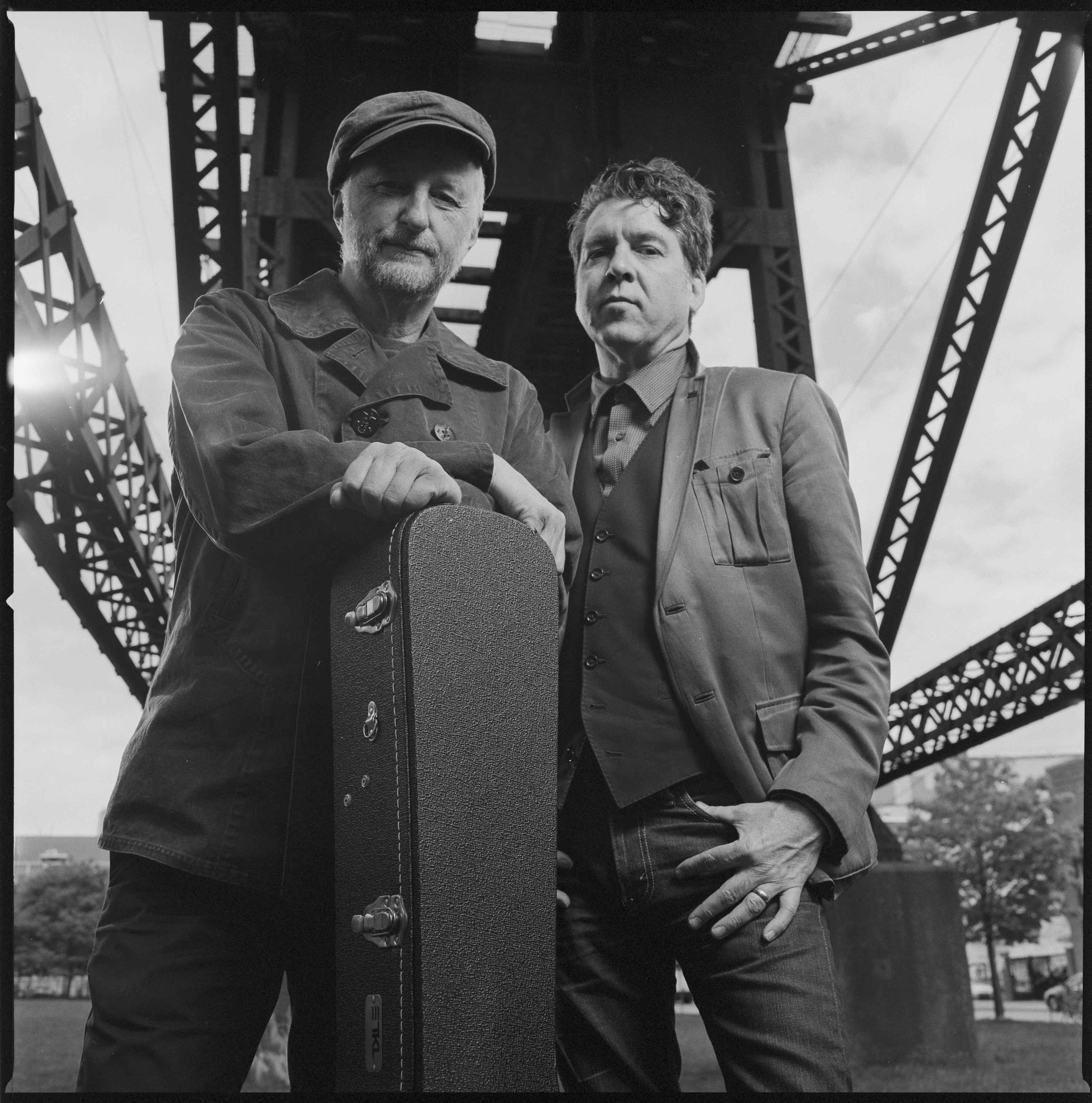 It’s not that these two are arguing that music can change the world on its own, but that it’s music that can change our perspective on our surroundings, make us feel empathy, strike a chord.

It’s what Beyonce did at the Super Bowl suggests Billy, and what Rudi Guthrie did with Hobo’s Lullaby too. “She made people understand and focus on Black Lives Matter, Guthrie made people empathise with the hobo. The songs don’t change shit, but it’s this power of what music can do.”

With time ticking on, and our conversation jumping from the best bars in New Orleans to Brexit, The rise of Trump to Garageband in 2016, I ask Billy and Joe what they’d like to see young musicians talking about today.

“I’m not asking young musicians to write idealogical capital ‘p’ political songs,” he responds quickly, “I just want to hear from them about the pressures they’re under, what’s bugging them, why they feel they’ve been treated the way they have. That’s all punk was.”

There’s definitely a sea change somewhere waiting, an opportunity for musicians to once again harness the power of music to make us feel, to demand change. The ascendancy of politically charged British grime continues, and the refugee crisis has a seen a smattering of releases demanding change, but still the charts week on week are hardly a hotbed of radicalism. On both sides of the Atlantic however, young people are looking for alternatives: Corbyn? Sanders? We’ve had enough of the status quo. Maybe music might soon start to reflect that. Didn’t Rizzle Kicks come out to back Corbyn a few weeks back?

“It won’t go back to how it was before,” replies Billy, “to a time when people like [Bob] Dylan were speaking for a generation, but the ability to break through people’s cynical barriers and find that empathetic moment is what music needs to do.”

I suppose at first I’d been a bit confused as to why these two seasoned performers might have been so interested in the music of the American railroad, but as they headed off to grab a curry it started to make sense.

The folky, heartfelt recordings of these classic railroad songs on their album drum up images and stir emotions in a way that’s hard to explain. It’s a tradition that what we need contemporary musicians to be follow, opening a newspaper, a look out the window or a trip on the American railroad will show you why.

Linkedin
RELATED ARTICLES
OTHER ARTICLES
The situation in Afghanistan remains dire, with many groups facing persecution at the hands of the Taliban.
The author discusses her blistering new novel about history, revolution and queer love.
New legislation is set to make it more difficult to hold Israel accountable for its human rights abuses.
Our new magazine is here, starring the inimitable Mitski. Order your copy now and join us on a trip around the world.
Government plans to make it harder for people to go to university will only entrench inequality.
Whether posing for portraits, making her own images or collecting works, the artist recognised the impact of photography at a time when it was not a widely accepted art form.