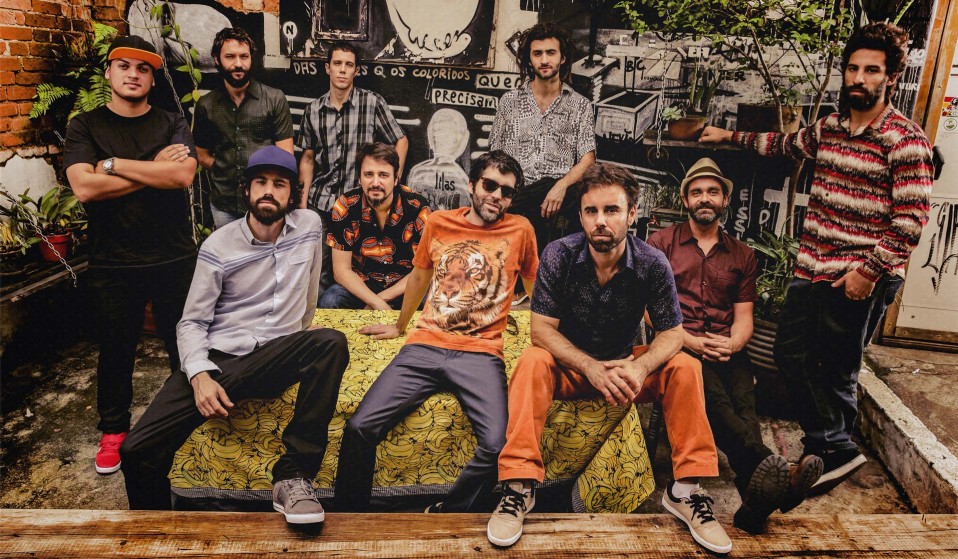 “In my humble opinion, Africa and Brazil: it’s all connected, man – it’s completely connected,” explains Daniel Nogueira, saxophonist in Bixiga 70. “If you look far enough into the past, Africa and Brazil were one thing: Pangaea. So it’s impossible for us not to be influenced by Africa.”

São Paulo ten-piece collective Bixiga 70 blend Brazil’s rich African music heritage with their own modern, eclectic twist. In part, they’re inspired by Fela Kuti’s Africa 70 band but also Brazilian legend Gilberto Gil, who hung out with Fela and brought the fruits of his African exploration back to Brazil, and a whole load more besides: from candomblé to capoeira, yoruba to samba, funk, jazz and dub.

“We love Fela and afrobeat but it’s always looked at through a Brazilian lens,” explains Maurício Fleury, who plays guitar and keys. “We just do what we feel really natural doing. We don’t pretend to sound like Nigeria in the ’70s, we like to sound like Bixiga right now: 13 de Mayo street, Number 70, you understand?”

Bixiga is a pumping, Bohemian area of São Paulo, where the band is based and from where it takes its name. “We’re very fond of the whole neighbourhood, it’s a very special place,” Maurício explains. “Music-wise, it’s the most important neighbourhood in the city: it’s the birthplace of samba in São Paulo, it has the biggest samba school and it’s where carnival kicks off too.”

After working separately as musicians and producers, the band formed around the hallowed studio in the neighbourhood, at number 70 on Bixiga’s main street. “It was kind of natural to form a big band in the studio,” Maurício explains. “It’s a room that has this musical energy that comes from the ’70s.” Opened and operated by musicians, in its day, it was where stars such as Stevie Wonder and American jazz singer Sarah Vaughan would come to jam after their concerts.

Some of that energy and heritage is clearly present on the group’s latest LP, III. But seeing the ten-piece live is another experience entirely: the rolling grooves from the percussionists and the giant blasts from the brass are electrifying as the band shift through a thumping, ever-changing set that nods its head to each of the band’s touchstones along the way.

“We tried to start out as an afrobeat band but once we started making music, it just came out like a big melting pot of cultures and rhythms,” Daniel explains. “There are no limits.”

“We’re always using different elements, whether it’s an African beat over a funky line from a synthesiser, or whatever,” Mauricio adds. “Because we’re ten people, we all see everything in a different way: it’s kaleidoscopic the way we see music.”

Bixiga 70’s III is out now on Glitterbeat.

Linkedin
RELATED ARTICLES
OTHER ARTICLES
A group of Ukrainians living in Poland are helping Ukraine withstand Russia’s brutal invasion by buying supplies and shipping them directly to the war’s frontlines.
Photographer Phyllis Christopher recalls capturing sex and protest at a time when the city had become a haven for the queer community.
The author discusses her blistering new novel about history, revolution and queer love.
The government is scrapping the Human Rights Act in a move that will hit marginalised people hardest.
The government’s failure to take long Covid seriously has led to the formation of a group campaigning for the thousands of forgotten victims of the illness.
New legislation is set to make it more difficult to hold Israel accountable for its human rights abuses.