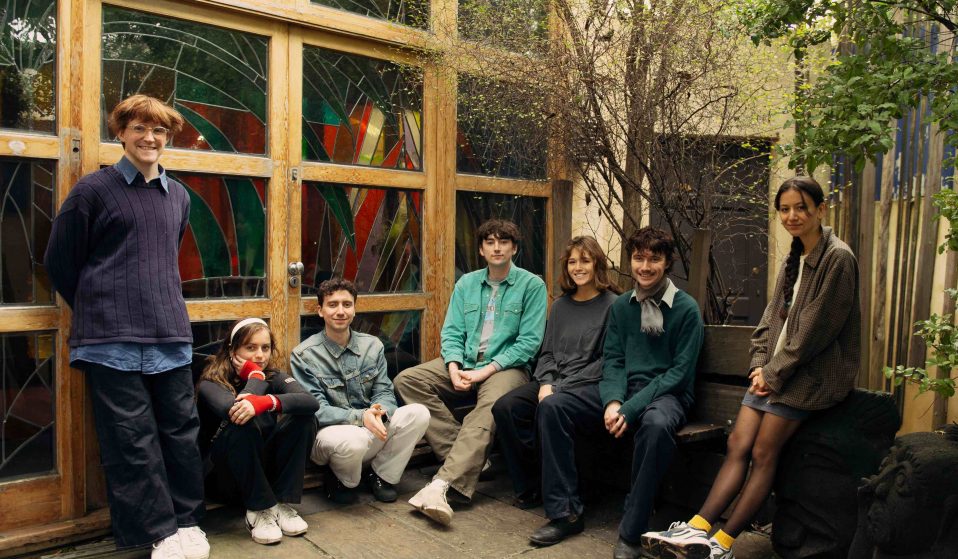 With just two singles released, The Quietus dubbed the band “the best in the entire world” at the end of 2019. Those singles have since been exchanging hands for over £100 online, while slots at prestigious festivals such as Primavera, Glastonbury and SXSW were confirmed before their cancellation. Despite the hype, it’s clear today that BC,NR have managed to stay rooted, as a pixelated Isaac Wood (vocals/guitar) and Lewis Evans (saxophone) stumble around trying to figure out if their wifi is switched on while simultaneously slurping on sweet and sour Pot Noodles.

As the pair slowly unblur, their webcam reveals an ancient looking boiler behind them. Georgia Ellory (violin) then joins the call, making three of the seven band members present. When fully formed, the sound of BC,NR could be described as the merging of post-rock soundscapes with jazz-inflected post-punk, but the nature of the band means it’s hard to pinpoint the exact impression. The meshing of classically trained and self-taught players adds depth, creating a unique concoction of precise, technical skill and primal passion. There are times during their delightful debut LP, For the First Time, when the listener isn’t sure exactly what’s going on. It’s a jarring but addictive sensation.

The music is largely instrumental, but when Isaac’s lyrics do come into force, attention shifts to the lead guitarist and vocalist. For instance, in their eight-minute 2019 track ‘Sunglasses’, he memorably declares: “Leave Kanye out of this. Leave your Sertraline in the cabinet … I’m more than adequate, leave my daddy’s job out of this.” It’s moments like this that best sum up the band: Isaac’s lyrics can be amusing, but he isn’t making fun of his generation. He and his bandmates are a product of an anxious society that’s always switched on, resulting in a kind of hyper-awareness of the world around them. Whether intended or not, BC,NR encourage you to ask questions: of your lifestyle choices, your scrolling habits, your relationships, your upbringing – and your future.

It’s fair to say that you’re a London band, even though most of you aren’t from the city. How has living in London changed the band – is it important to be here?

Isaac Wood: The band was formed in London. Although most of us come from outside of London, we see it as our collective home.

Georgia Ellery: I think I can be different in London when compared to my smaller hometown. I move faster and find myself playing in a more frenzied way. I try and fit more in my day and that must come out in my music. It’s a rat race, but it’s what I like.

Lewis Evans: I find myself pretty chilled here, everyone talks about how anxious it is and how you need to get away from the city, I get that, but I don’t know if I’ve ever felt that way.

I found it pretty suffocating in lockdown, but I think that was largely due to the limitations. How did you find coping with that from a creative standpoint?

IW: I think we felt a little bit more pressure to get creative during lockdown, but we essentially couldn’t. I haven’t done anything musically for three months during lockdown and I think that’s partly because the whole band can’t be together. We’re such a high energy band and that energy comes from being together, I’m looking forward to getting that back.

On top of lockdown, musicians have had to deal with Brexit and the issues that will bring to touring. Moving forward, does all of that change the way you’re thinking about touring?

LE: We haven’t been thinking about touring at all, really. I guess we will just find out when we get to it. But I think it’s important to say that we’re not really the sob story here, it’s not us that are getting affected by it the most. It’s younger bands, it’s people with much larger ensembles than us, and it’s people that don’t have the backing in the first place. We’re so lucky and thankful for it.

IW: There is also so much, outside of music, that has been fucked by it. There are some slightly more threatening things, rather than having trouble touring the EU or the UK. It’s wreaked havoc everywhere, so it’s hard to think about it specifically in terms of music. It’s something that has changed a lot of other things and for a lot of other people, life as a whole has changed for them a lot more than it has for us. We’re lucky to be in a comfortable situation musically, and generally. 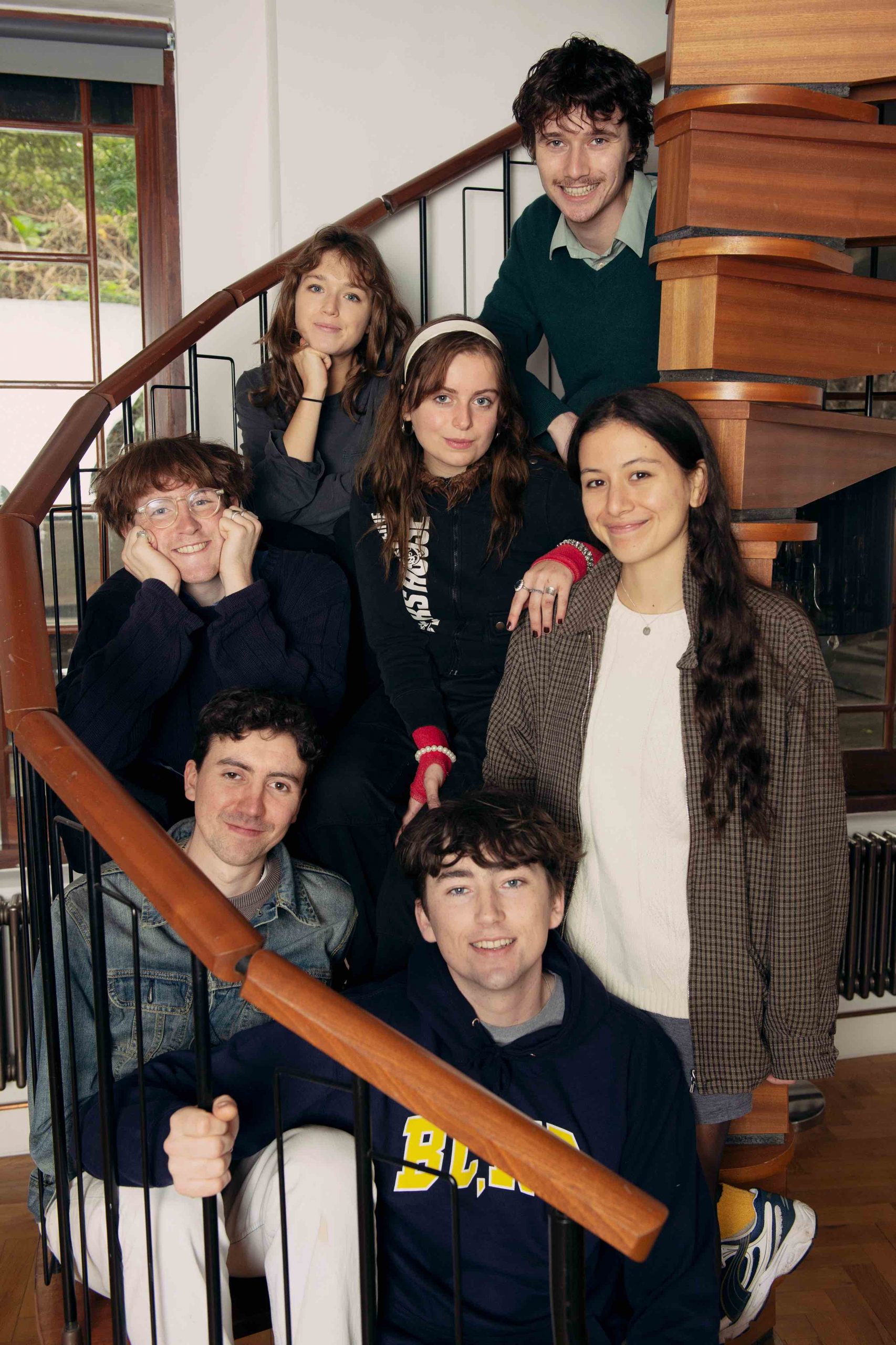 Georgia, you’re one of the two members in Jockstrap. Lewis, you’ve released music under the name of Good with Parents. Isaac, I’m a big fan of your earlier work as The Guest. Is having these other creative outputs important?

GE: I think it’s personal to each member of the band, but generally I think so. We’ve all got very eclectic taste. We have lots of things we want to create and having different outputs means that we can do that without treading on each other’s feet.

LE: It’s also helpful to use these creative outlets to keep you a bit sane, because when you’re in a band of seven people you can’t be creative all the time. It’s good practice to create something you can’t control.

GE: I think we know where we stand with BC,NR – it’s an instrumental band and we all play our own instruments. A lot of the mapping out is already done and we’re kind of working within the same parameters, but at the same time, we’re not against altering things creatively and individually. Just the other day Isaac was saying that we’re all going to be playing medieval instrumentals.

IW: Yeah, we’re thinking that it would be a good vibe to get some lutes and flutes. Some really old instruments.

Would they be difficult to pick up?

IW: It would be an easy transition from guitar to lute. I would be very good within two weeks.

LE: It was all holed before the 1800s – or 1700s, really. You’ve got some buttons on flutes and early clarinets, but it would be mainly holes in flutes and stuff like that, which I already kind of have on my flute. I’ve got holes on the buttons, so you can bend and stuff like that. I’ll probably be alright with a holey flute.

IW: Plus we’ll be taking a year out anyway. One of us will go to rehab.

Where else, music aside, do you draw inspiration from?

GE: We all like to read, and we all like to watch movies, Tyler [Hyde, bassist] understands art. I think we all appreciate art, but Tyler understands it – I’m sure she takes art and works it through her playing or concepts. But it’s important to step away from your own music and music in general sometimes… I’ve definitely found myself entering a kind of tunnel vision if I’m just relying on music to inspire me.

IW: In periods of intense writing for me I listen to so little music – almost none. I listen to all the demos of the stuff I’m working on over and over again and then occasionally listen to The Beatles and the classics. That’s it. It’s not necessarily a thing for me: looking for inspiration. I don’t find myself outwardly looking for it, particularly. I like to watch TV, I like to read books, go for walks and spend a lot of time feeding squirrels. If you have a genuinely beautiful experience with a bird or a squirrel, it will change your life forever. Not dramatically, just in one or two ways maximum.

Isaac, humour and irony is littered throughout your lyrics. How important is it when you’re writing?

IW: I think humour is basically one of the most fundamental elements of good music. Any really, really good song is at least a little bit funny – there will be something funny about it. I always try and make songs a bit funny. Not too much, you don’t want them to be like comedy sketches. But even if the theme of a song is incredibly intense or sad, there should always be something a little bit funny about it to make it good.

Is it a tool to remind people that they shouldn’t take you or your music so seriously?

IW: Yeah, I like to think that everything is slightly absurd and funny anyway. I don’t think anything really bad has happened to me without there being something also adjacently funny involved with it, or some sort of humorous angle. It’s just there, so why ignore it. 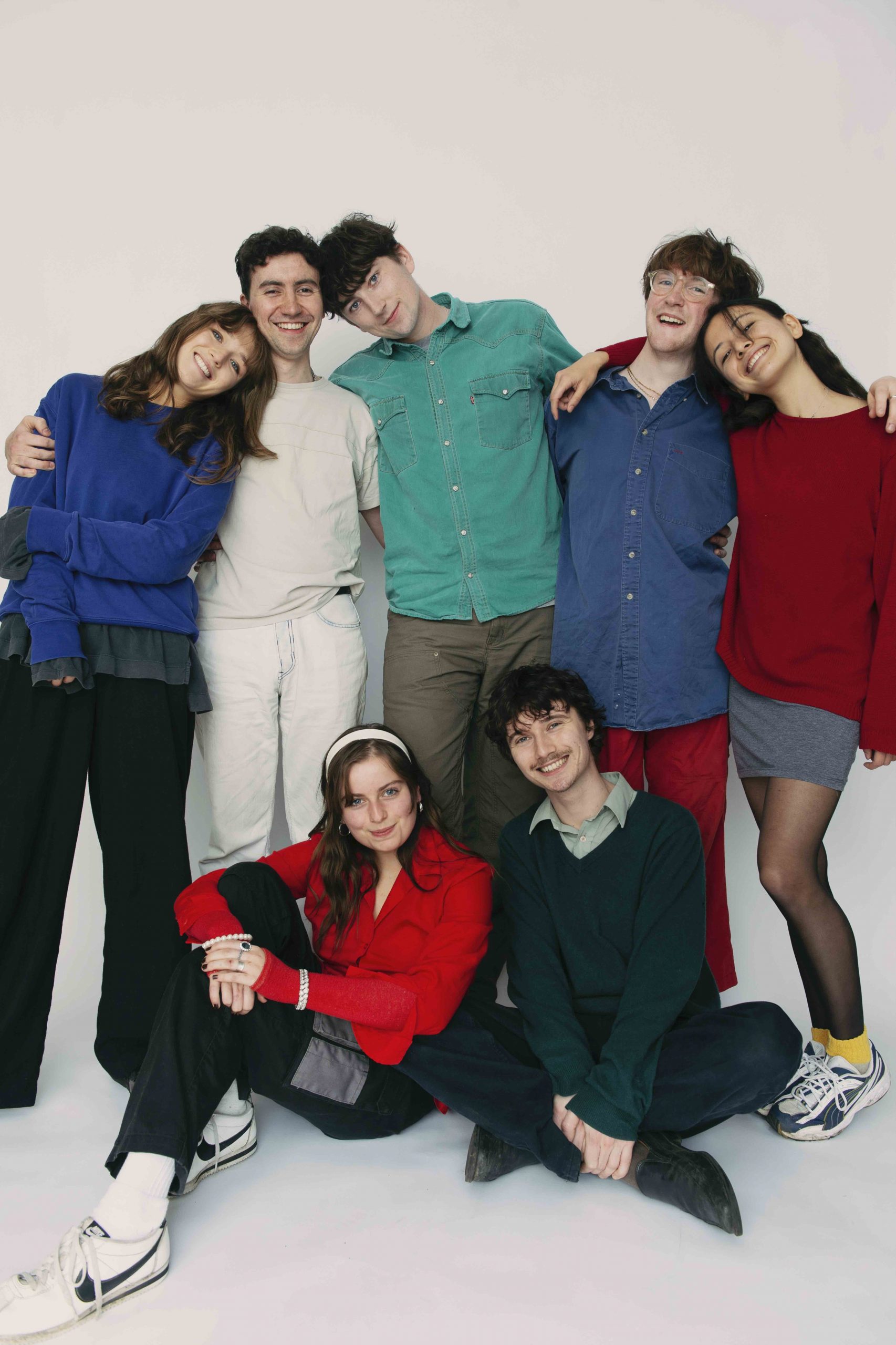 Some of the bands merchandise was funny in its nature. The jigsaw puzzle, for instance. Was there anything that didn’t quite make the cut?

LE: A back to school line – pencil cases, rulers and all of that. Potentially a trigonometry set.

GE: We got quite close to doing KeepCups.

IW: That whole thing was a little bit out of our hands, the duties of those were picked up by our associate Bart Price without our consultation. He’s taken over the whole thing, our entire online presence, our social media, our merchandise, our branding, our music videos.

LE: He wrote most of the songs.

IW: It’s a bit of a weird vibe, I just met him in Soho and I found him in a bar. He is in charge of the whole thing.

LE: I also came up with an idea for merch. If anyone comes up with this idea, I’ll know that it’s stolen. I think I’ll take this separately from the band and it will be my new venture. I was thinking about a big old stew pot and the lid of the pot is a frying pan. So basically just picture this stew pot with a lid, but the lid has a handle poking out of it. Like a rubber lid or something. You take the lid of this pot, fry your onions and garlic.

LE: You put your chopped tomatoes in if you want them. You want to cook some meat on the saucepan? Take the lid off, cook the meat and it just goes straight back in the pot. Just like that. One movement. Straight back in the pot. Easy. Just remember: the pan is the lid. As a merch idea, this might be expensive, but maybe I can take this as my own venture. Potentially Dragons’ Den.

How much are you looking for and how much equity do I get?

LE: I think there is a very good chance that you won’t see me in the band by album three.

Linkedin
RELATED ARTICLES
OTHER ARTICLES
Members of the collective share some of their reasons to run as part of #UnitedBySummits, a campaign that looks to uncover transformative power of the outdoors.
In the latest OFFF Dispatch, the enigmatic designer dives into his process, connecting the dots between his unique and varied creative output.
The author discusses her blistering new novel about history, revolution and queer love.
After news broke last week around an expected reversal of the 1973 landmark law that made abortion legal in the US, protestors gathered in the UK in support of American women.
A new documentary explores the government’s efforts to quash the protest movements of the late ‘60s by any means necessary.
Government plans to make it harder for people to go to university will only entrench inequality.