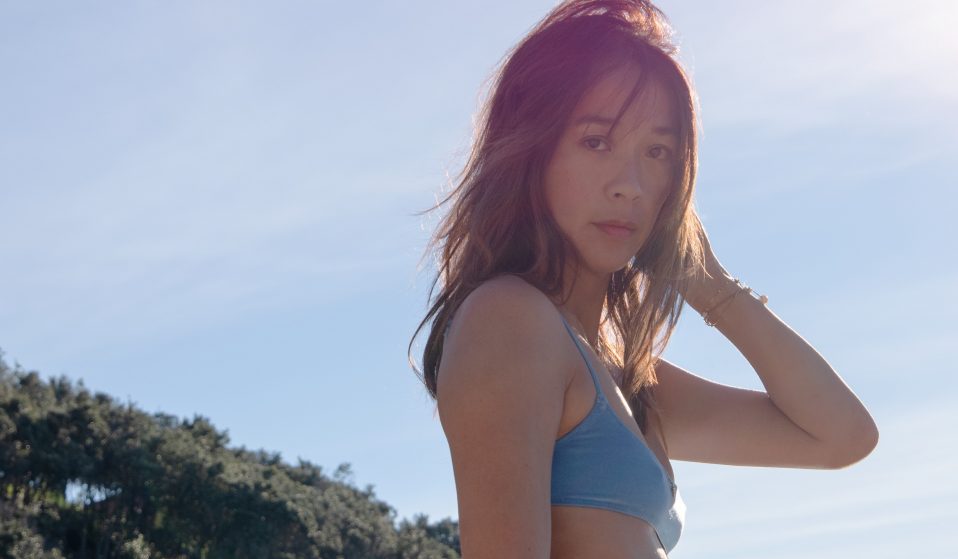 The avant-pop artist has just released her first ever solo record, recorded on the remote and idyllic island of Elba. ‘I think I found something quite emboldening in the way I write music,’ she tells writer Jeremy Allen. ‘I have a bigger core than I thought that I did.’

The avant-pop artist has just released her first ever solo record, recorded on the remote and idyllic island of Elba. ‘I think I found something quite emboldening in the way I write music,’ she tells writer Jeremy Allen. ‘I have a bigger core than I thought that I did.’

Kazu Makino’s debut album has been a long time coming, but it’s certainly worth the wait. Adult Baby is a lush, hypnotic adventure into avant-pop by an artist best known as one third of Blonde Redhead. Makino has often considered making a solo record, but at the same time she’s been happily ensconced within the influential New York City trio alongside the Pace twins, releasing nine critically acclaimed albums since 1995 (including the 2004 masterpiece Misery Is A Butterfly).

But then recently, her circumstances changed. Kazu’s asthma took a turn for the worse several years ago and doctors gave her the choice of either taking debilitating medication or moving somewhere where there’s plenty of fresh air. She chose the latter and made a new life for herself on the Isle of Elba, a beautiful Tuscan Archipelago in the Tyrrhenian Sea which is most famous for being the island Napoleon was exiled to. After a long sabbatical, she intends to return to New York City after her upcoming North American and European tour in October and November.

Adult Baby, as well as exploring themes of fetishisation, is a resounding tribute to a land that has enabled her to breathe again. A visual album is promised which will pay homage to the beauty of her surroundings, while you can almost feel the spray from the Med as you listen to lead track “Salty” – with its backward tracking and diaphanous vocals, it is especially evocative of communion with the ocean.

”I didn’t have the ambition to go there and make an album,” she tells me over the phone. “It just came to me when I started to feel really well. I started writing songs, slowly, and I spent a lot of time alone. It was good for me to spend time like that”. Blonde Redhead’s Amadeo Pace guests on the record, as does Deerhoof’s Greg Saunier, and the Art Orchestra of Budapest make an appearance too. But perhaps the biggest coup of all is the involvement of legendary Japanese composer Ryuichi Sakamoto.

Adult Baby is a triumph. How did you come to collaborate with Ryuichi Sakamoto?
I’ve been his acquaintance for a long time. I wouldn’t dare say I was his friend, but he’s been very friendly with me over the years. Whenever I need to see him and speak to him I will shoot him a message and he’ll usually say ‘let’s have lunch’. I’m quite shy so I think it took about two dinners before I said ‘I’m thinking about making a solo album’, and he said ‘use me if you need to. Even if you don’t need me you could just paste my name on it so somebody else might decide to give it a listen’.

How did the pair of you go about crafting the songs on the record?
He told me to get this small microphone that I can attach to the iPhone. And then he said, ‘send me any and all of your ideas from now. Send them ALL to me’. So I did that, and he never replied to any of my messages! So I wasn’t sure if he was listening to it or if he liked it – nothing. I thought I should stop sending, which I did. And then he sent a message saying ‘why have you stopped sending the ideas?’ So he was listening. And then one day he said ‘make sure to put on the airport mode because I’m hearing static noise’. And I was like, ‘wow, he’s actually listening’. It went on like this for about half a year before he said he was ready.

On the song ‘Salty’, are you singing in Japanese as well as English?
I just reversed my vocal that was in English and it sounded Japanese. So I rewrote that part with Japanese words trying to make sense out of it and sang it over the top. It sounds Japanese or maybe Islandic.

On Adult Baby and also Misery is a Butterfly I can hear a strong Serge Gainsbourg influence. You’re a fan, aren’t you?
Really? Wow. I’m flattered. The way he projected things onto music was so great and so outrageous and genius. What fascinates me is the way he was so down on himself; it seemed like he was always putting himself down. In a way, it breaks my heart.

You clearly found some peace and fresh air on the beautiful island you’re calling from. Do you think the deposed dictator Napoleon found some peace there, because he wasn’t the nicest of chaps was he?
What’s interesting is that he was born in Corsica, which you can see so clearly from Elba, and I wonder how he felt about that? It’s just there across the water, and he’d been in control of this great empire. But even in Elba, I think it was in his blood to dictate and govern. He did a lot of things in Elba: he designed a flag here, he organised the roads and he even made a little army, he built a theatre… I think he did what he did best here, and there are lots of traces of him in Elba. I find it quite funny.

I know you moved from the US because of your health, but was it also a relief to get away from the political madness at the moment, even if New York is quite a liberal place?
Yeah, yeah, reality in America is quite distorted right now. It’s hard to really grasp what’s going on. It’s hard to fight back.

There are a few edges to the Adult Baby theme aren’t there? It can be looked upon as the kind of infantilisation that’s happened to us collectively, or it can be taken as something more kinky, right?
There’s this Adult Baby club in Germany where very heavyweight executives, big wigs and politicians go to be treated like infants. There’s an incubator where a nurse treats them like babies. It’s like an antidote for people who in reality have to make all the decisions and take care of everybody. And they have this side where they’re completely helpless and get treated like a baby. And then I knew this man, a friend, for years, and someone said ‘your friend is one of those people’. That was such a moment for me: he was this really big, older man and I couldn’t help imagining him in this baby outfit having something to suck on.

When I tell people the title they say, ‘yeah, I’m an adult baby too’. You can translate it in so many ways and I’m good with that.

Why has it taken so long to release your first solo record?
[Laughs] I think it’s really because it’s the first time I’ve moved away from the twins. Physically I couldn’t work with them anymore. They were back in New York, and I was here in Elba. It wasn’t a declaration of independence, I just thought I wanted to do this for myself. And for me, it felt good. I guess somewhere in my mind I thought I might want to do it, but I didn’t have the courage and I didn’t believe in myself. Once I confronted it instead of confronting my fears, there was a pleasure and a playfulness, and I think I found something quite emboldening in the way I write music. I have a bigger core than I thought that I did.

Linkedin
RELATED ARTICLES
OTHER ARTICLES
The government’s brutal crackdown on NGOs has left victims of rape without anywhere to seek help. And now, as the country plays a key role is Russia’s war, things are only getting worse.
The author discusses her new memoir, which offers a sobering reflection on the racism and otherness she’s experienced along with a joyful celebration of her culinary heritage.
With the virus now a global health emergency, we must take steps to fight misinformation and demand a swift UK-wide vaccine roll out, writes Phil Samba.
Yesterday, rail workers came together to protest poor pay, working conditions and job cuts in their latest round of strikes.
A sharp increase in officers armed with the electrical weapon is resulting in serious injuries and deaths.
From the chip shops, to the bingo parlors and burlesque dancers, photographer Mike Coles remembers capturing scenes of holidaymakers by the English coast.