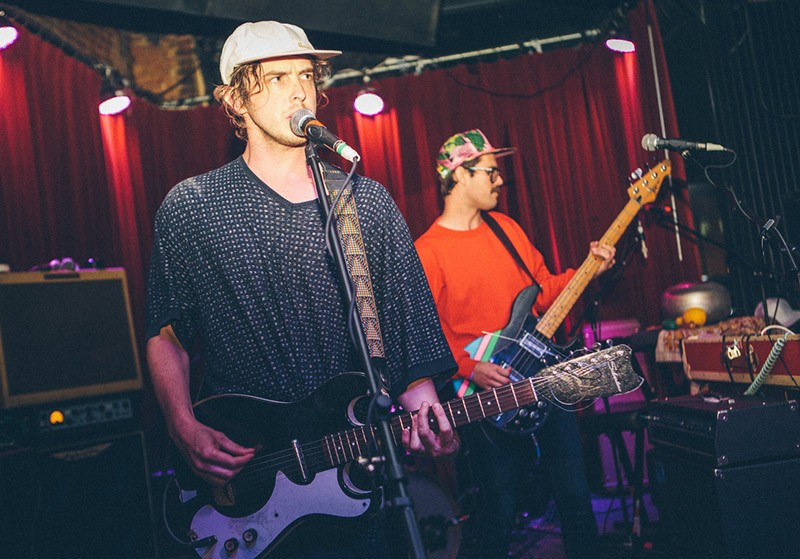 We put lead singer Ryan Lindsey through the Suburban Youth Pop Quiz to get his take on life before punk.

We put lead singer Ryan Lindsey through the Suburban Youth Pop Quiz to get his take on life before punk.

Broncho is a punk band made up of four guys from Oklahoma. They play house shows, they play vans and sometimes they run around naked. Well, at least their lead singer Ryan Lindsey does.

The first single ‘Class Historian’ off their new album Hip Enough To Be Woman is about a ten-year high school reunion and “the anxiety associated with, ‘Do I go? Or do I not go?’.”

So what was Lindsey like as a kid? Curious about his life before punk we put the frontman through the Suburban Youth Pop Quiz. Check it out.

Where did you grow up and can you describe it in three words?
Stillwater, Oklahoma. Completely right on.

Who was your weirdest neighbour?
We called him Bull, my brothers told me he was a sex offender, I found out later in life from my mother that they were lying to me.

What was the most important record you owned?
John Lennon Double Fantasy.

Where did the bad kids hang out?
Will Rogers Elementary.

Who was your first celebrity crush?
Elisabeth Shue, Karate Kid, she had me from the start. And it continued when I saw the saint with Val Kilmer, and continues to this day.

Describe your first kiss.
My first kiss was at Carmike Cinema, my first make out was at her house while listening to ‘Hook’ by Blues Traveler.

What happened the first time you got drunk?
I don’t remember, I honestly don’t. I wish I could picture it.

What is the naughtiest thing you did as a suburban youth?
I got naked a lot. Ran through parties naked, showed my ass a lot.

What was the best party of your teenage years?
Any party at Megan Talley’s house, she had a pool and cool parents.

What’s your most embarrassing suburban youth memory?
Getting dumped after buying my girlfriend of three days the New Boyz II Men album on tape rather than CD. I used all my money to buy that tape. Didn’t have enough for CD. I realised at that moment I was poor, and have been ever since :).

What was the greatest lesson you learnt during that time?
To stop getting naked in public.

Who would you most like to see at a reunion?
Mrs. Mcswain.

What was your first car?
Two-door Pontiac Grand Am.

What was your food of choice?
Pizza shuttle.

What was the biggest fight you ever had with your parents?
I didn’t really fight with my parents.

What book/film changed your teenage life?
I did the same book report three times. The book was Doris Fein: Phantom of the Casino. It should be required reading.

What posters did you have on your bedroom wall?
Bo Jackson, Michael Jordan, Ozzie Smith, a three car garage with a Lamborghini a Porsche 911 and a Jeep.

Any hobbies you didn’t give up?
I wish I hadn’t given up my N64, I really miss it and I miss Ninja Gaiden on original NES.

What smell reminds you most of your suburban youth?
Sweaty locker rooms.

Find out more about Broncho.