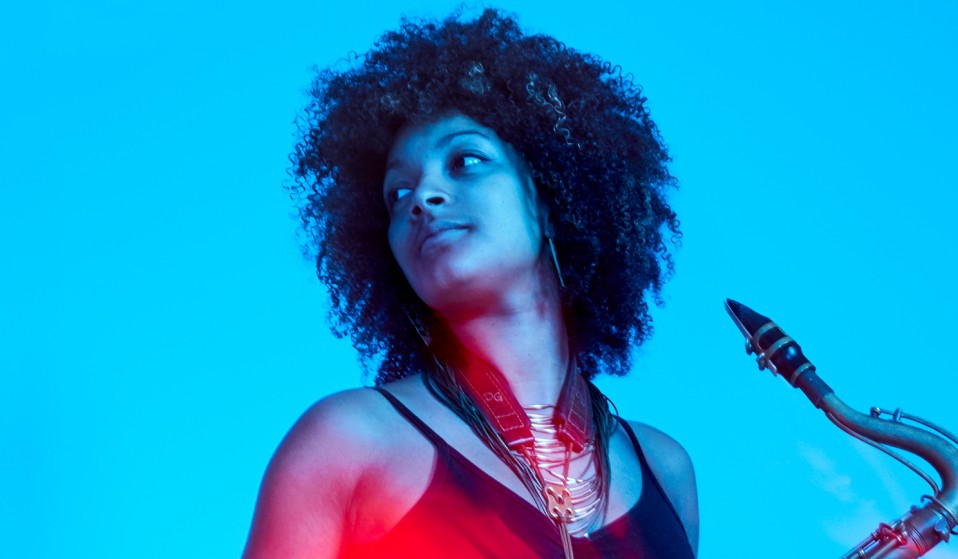 In a world of manufactured music, jazz is still a place of pure freedom. Now London’s bright talents are reimagining that legacy for a new generation, pulling from their multi-textured roots and making it up as they go along.

Jazz. The word and the music it represents have been fetishised, couched in clichés and drained of meaning. Everyone thinks they know what it means. And everyone is wrong.

But a bunch of young Londoners – with musical backgrounds as diverse as the city they call home – are redefining what jazz can mean here, and what it can mean now.

“There’s something magical when a band comes together and creates something in a limited period of time,” says Shabaka Hutchings, saxophonist and musical director of We Out Here – a new project showcasing one of the capital’s sharpest subcultures. “The ego of the individuals doesn’t get in the way.” 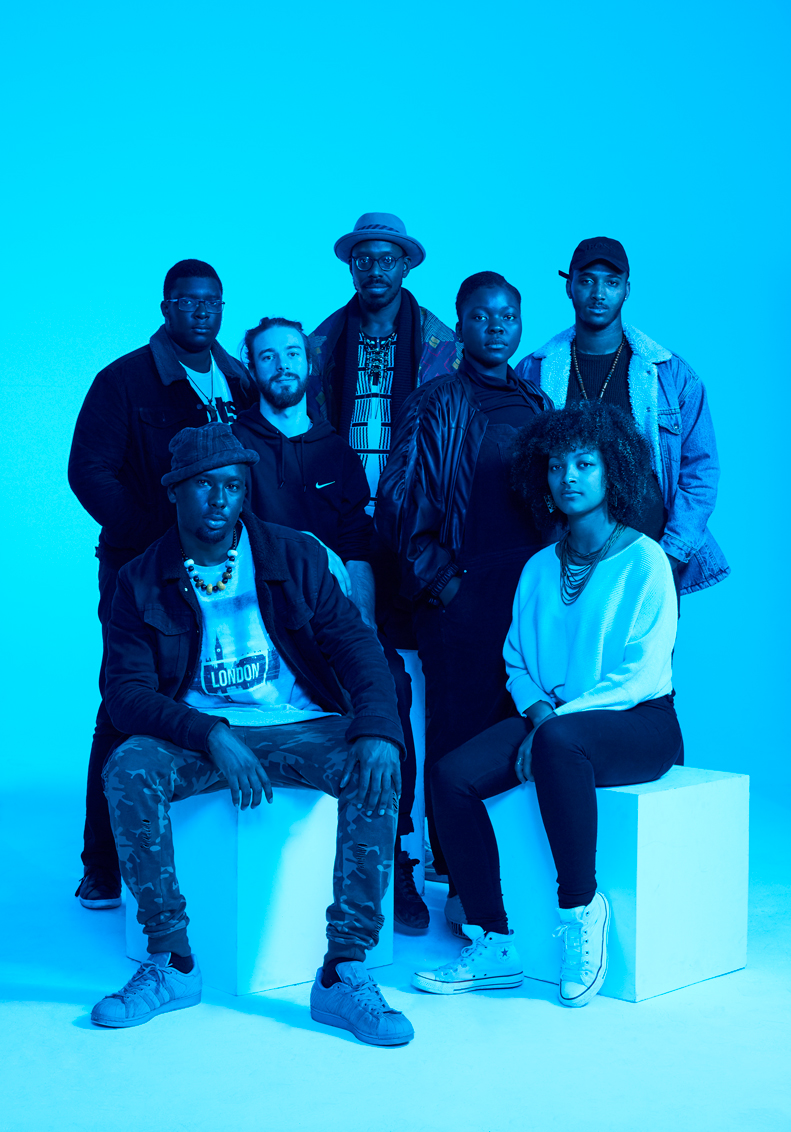 Shabaka sits in the slanted light of a yard outside a studio in London Fields. He’s tall, wears glasses and has an African-style weaved garment draped around his shoulders. His homburg hat is tilted at a rake, framing an intense air of creative curiosity.

The 33-year-old believes that composition is a chronicle of the zeitgeist. We Out Here, a compilation nurtured under the gaze of Gilles Peterson’s Brownswood label, is the perfect way to put that idea into practice.

The result is a surprising, intricately spiced gumbo that feels both urgent and a throwback to the glory days of jazz – when recording ‘dates’ saw a more or less improvised session crystallise in a magical moment captured forever. If the album had been recorded a week earlier or later, Shabaka says, it would have sounded completely different.

This bright-burning jazz scene is the result of something that’s been developing for a long time. Many of the musicians in this project have known each other for 10 years or more. 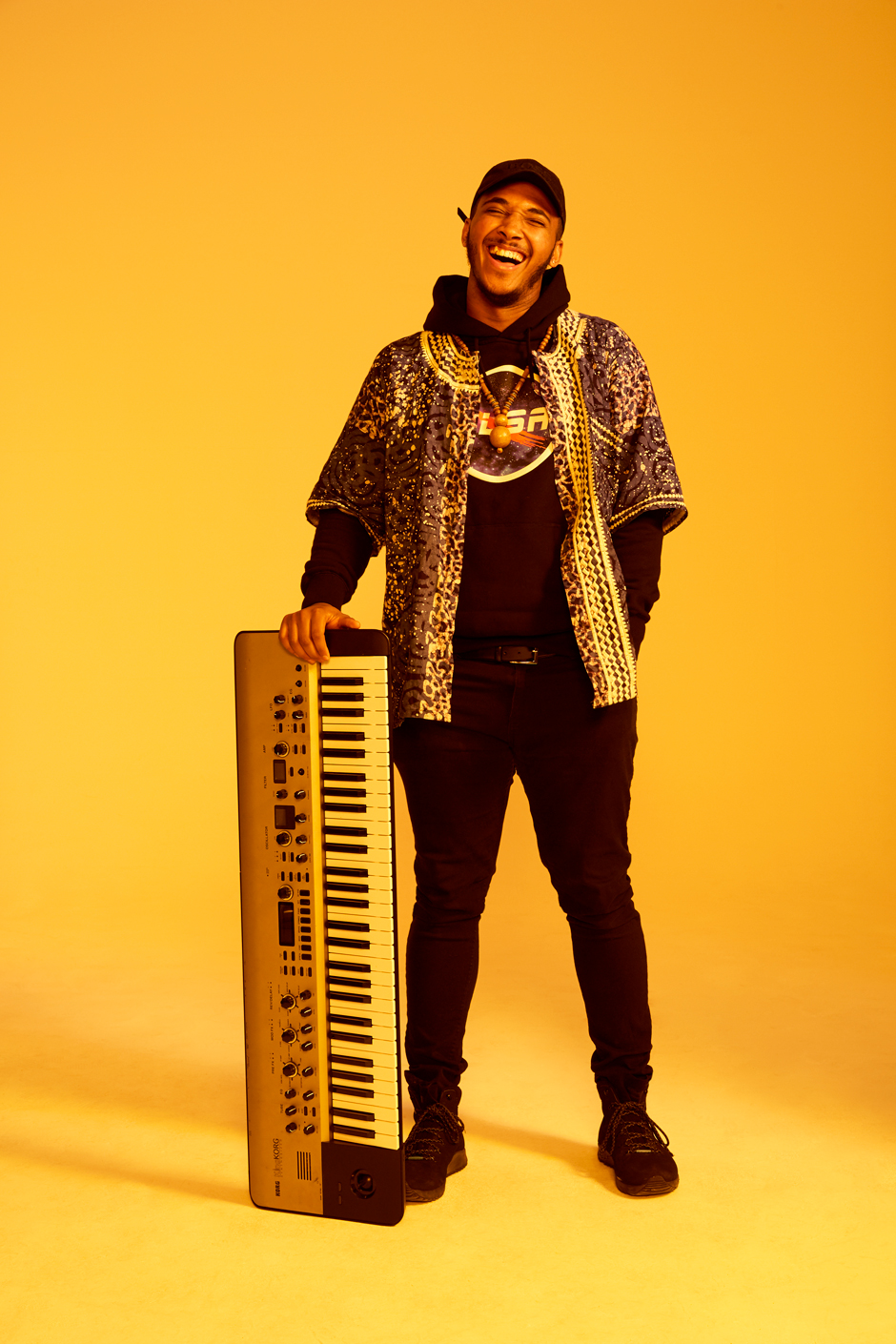 Some are classically trained, some have learned from YouTube. Their rapport is built not just on a shared passion, but a loose musical heritage: a mix that extends from West and Southern Africa to the Caribbean, with a bit of European culture in there too.

“There’s a long history of musicians gravitating to London, because cities like this are more open to creative music,” he says. “What’s really interesting is what happens when different parts of what people call ‘blackness’ get involved in jazz. The fringes of all these communities create a scene where unexpected things can happen.”

The project as a whole feels reminiscent of what unfolded at the end of the ’80s with acid jazz and the more straight-ahead explorations of influential London-based collective the Jazz Warriors.

It was a time when shaking your ass on the dance floor and a longing for rich, meaningful music proved to be perfectly compatible. 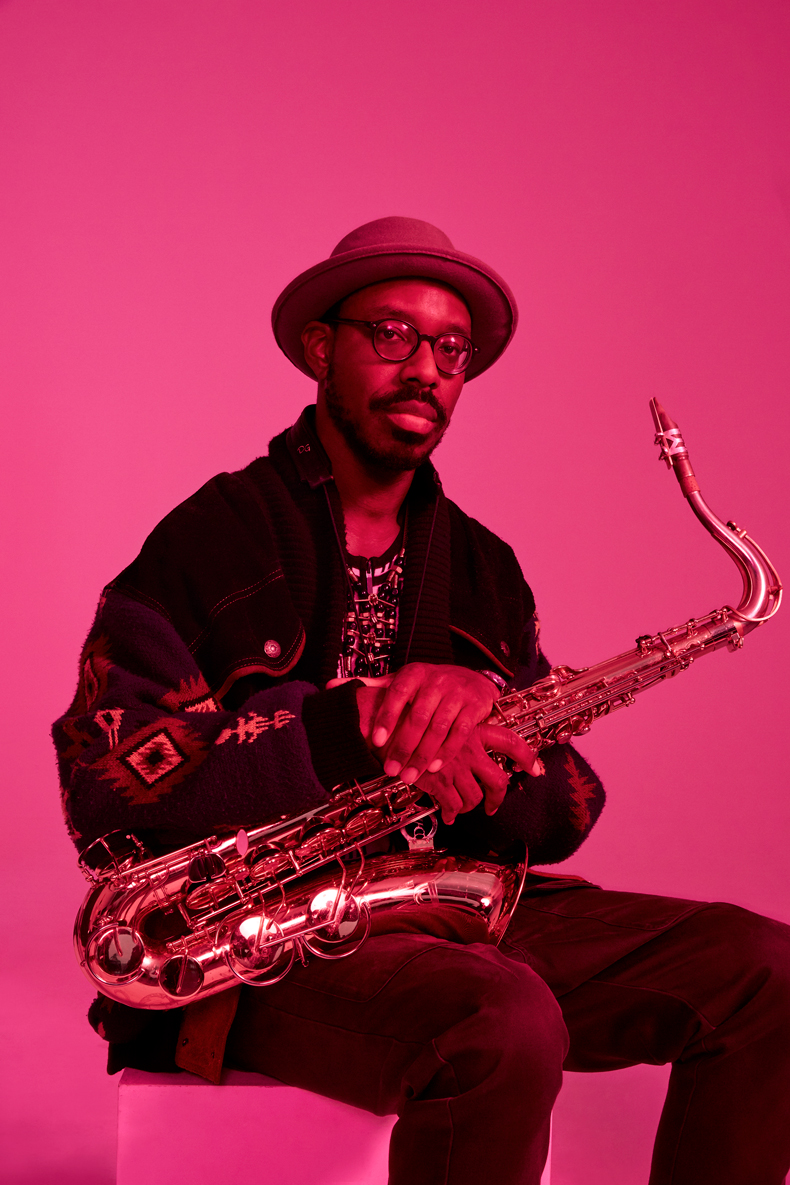 “The real link between that scene and what is happening now is the relationship with the audience,” says Shabaka, nodding.

“The audiences then and now want to dance. It doesn’t mean that they want to dance at the expense of intricate music – music that shows a respect for tradition but still pushes people in terms of how much they can take artistically and sonically. For me, it’s about finding that balance between making music that puts the audience in motion, but also stretches them.”

But can that sound – imagined, produced and performed by a new generation – really be labelled ‘jazz’?

“The term was never really accepted by the greats,” says Shabaka. “It denotes things that people expect artists to do from outside. In the eyes of the industry, a jazz musician is someone who… ‘apply your stigma here’.

“Those things might be true in one respect, but it’s not all that they can be. If the word ‘jazz’ can include many things, then we’re a part of that – but if it restricts what we can do, then we’re not.” 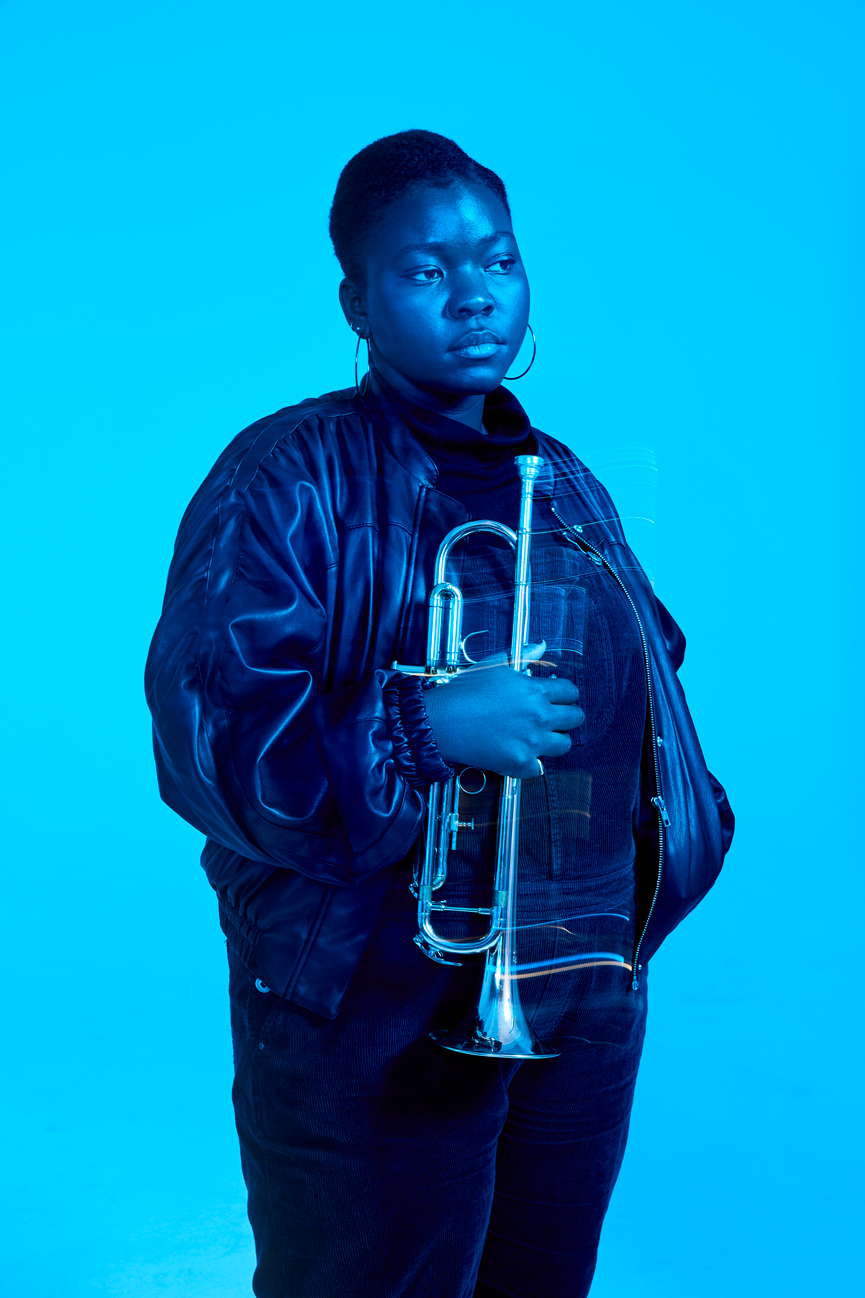 Sheila Maurice-Grey grew up playing African gospel music in the church she attended with her mother, who is from Sierra Leone, and her South African father.

Her first instrument was guitar, which she picked up at the age of eight, before graduating to keyboard in her teens. The moody, ethereal quality of Sheila’s sound, led by the trumpet and represented in this project by her band Kokoroko, complements the open-hearted energy she emanates.

“The trumpet is a difficult instrument, but powerful. There’s only three keys – and so much of the sound is about being able to hear a note prior to playing it. The process of becoming one with the instrument is what drew me into this whole world. At times it’s still a love-hate relationship, as it’s so difficult to achieve that connection.” 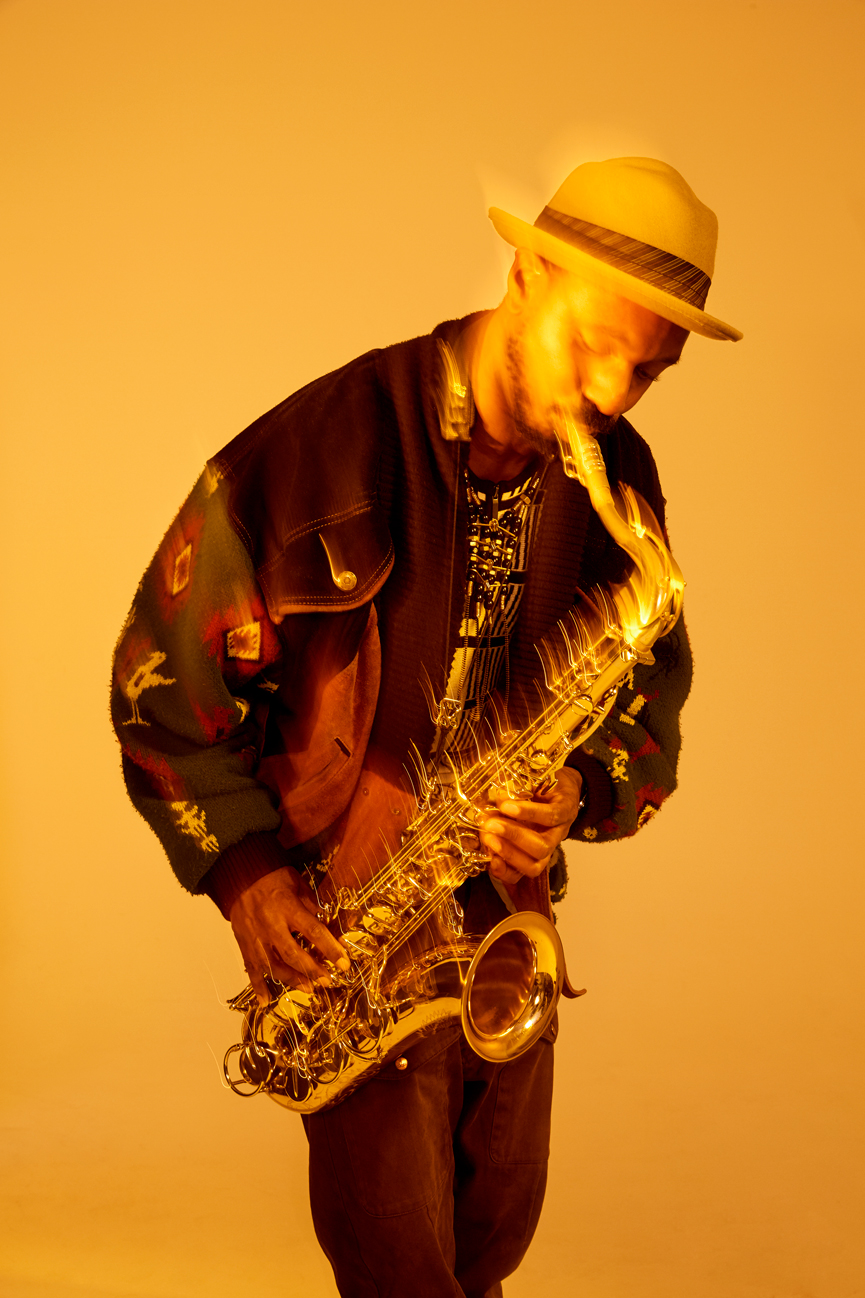 Shabaka Hutchings was born in 1984 and moved at the age of six from London to Barbados, where he began studying classical clarinet three years later. At 16, he returned to the UK to continue his studies in Birmingham and then London – where jazz seemed to be all around him.

Today he’s something of a mentor to younger players whose idea of jazz effortlessly fuses hip hop and electronic elements with traditional instruments. “The process of this project’s becoming was pretty organic. It was clear who the people moving and shaking in London are.” 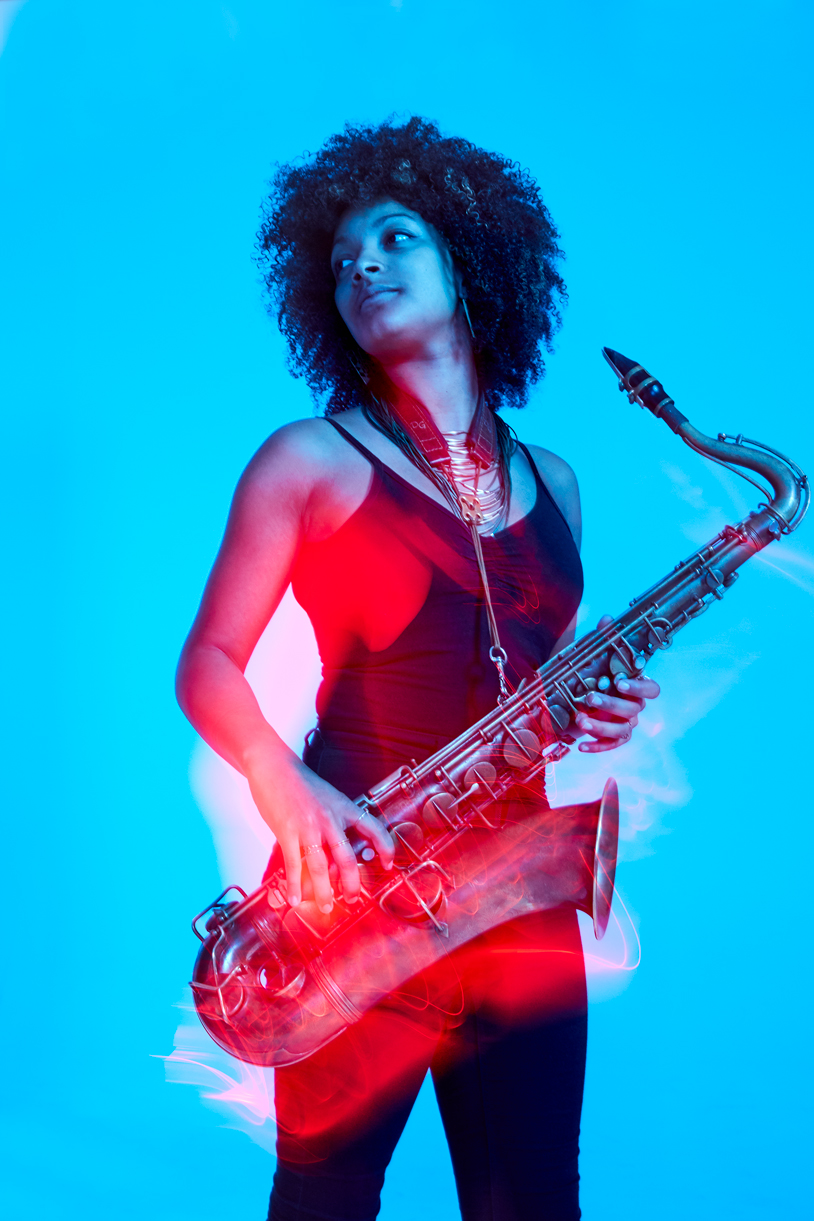 Saxophonist and composer Nubya Garcia was born in 1991 and grew up in Camden. There is a cool mellifluousness about Garcia, a strength of confidence that’s perfectly reflected in her sound.

After an early grounding in music through her Guyanese-Trinidadian family, her mum presented her with an alto sax as a teenager and she went on to study at London’s Trinity Laban Conservatoire of Music.

“Jazz was the first music that I fell in love with. Growing up, I played classical but it was this music that drew me into the world of performance. Improvising was a scary concept but once you move through that fear, it’s a beautiful form of expression – especially if words aren’t your thing. I was just drawn to the sheer transformation that you can get from it.” 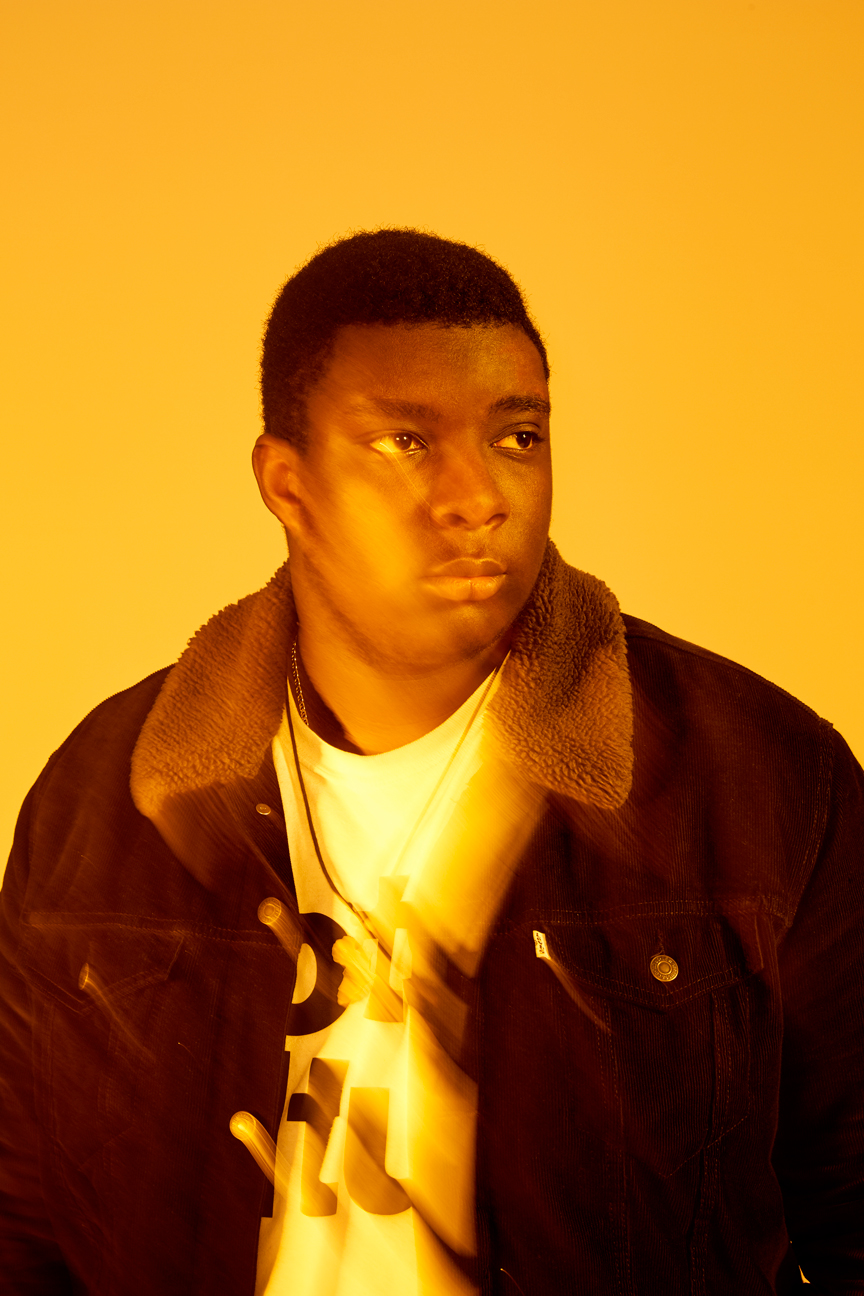 Drummer Benjamin Appiah was born in London in 1997 and grew up among a family of academics with a Ghanaian background. He now studies music at Middlesex University, where he met the co-founders of his band Triforce. They released their debut EP in 2016.

“Jazz is all about creating a sound that is unique in its own right. It’s about putting things together that wouldn’t normally suit one another – and then finding a way to make that work. In our case, I think we bring all sorts of influences together – be they Turkish, Caribbean or European – that reflect the boroughs and communities where we were raised.” 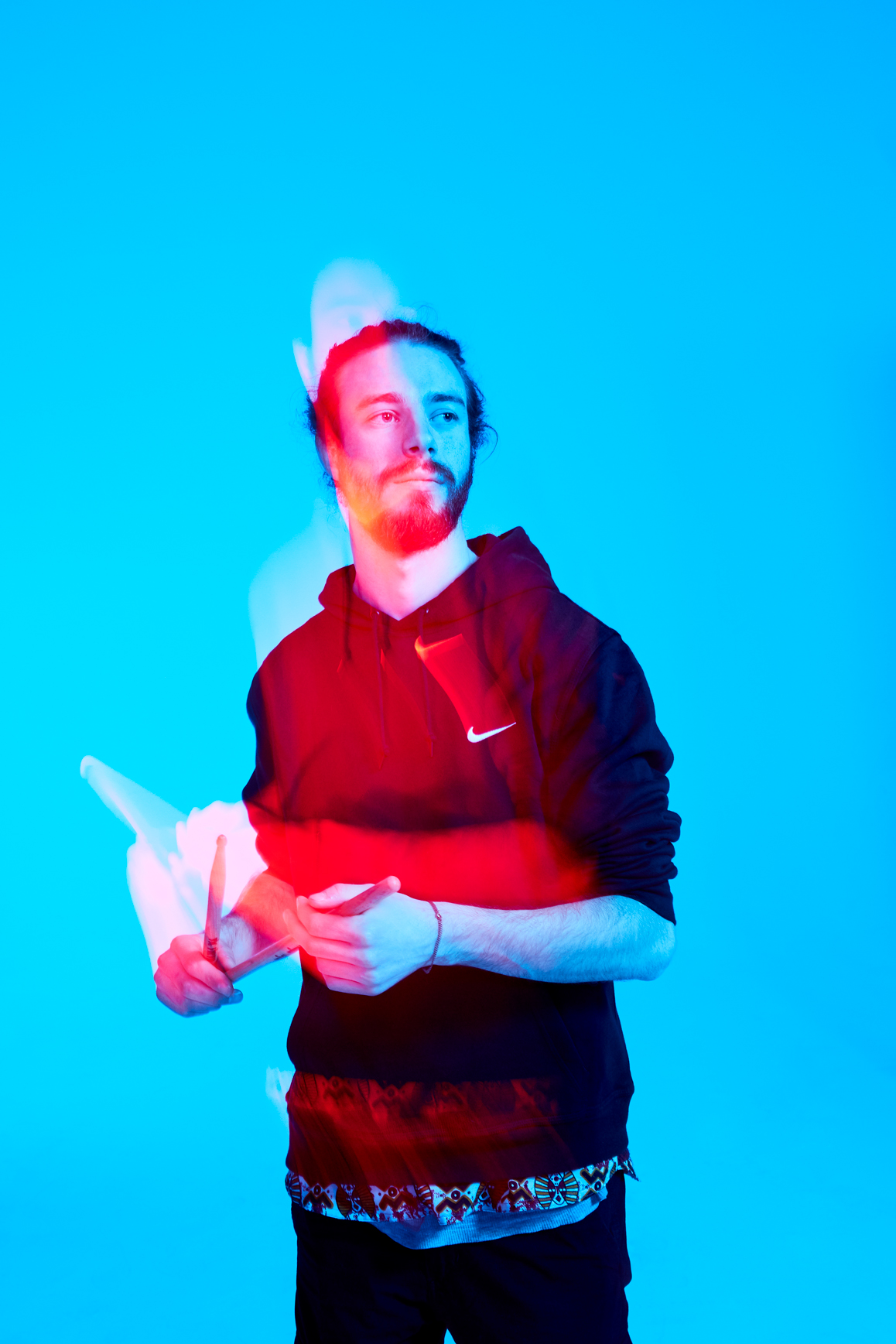 Jake Long, a 24-year-old drummer with a quiet intensity about him, is the composer and band leader behind six-piece ensemble Maisha, whose founding members met at London’s Trinity Laban Conservatoire of Music. Their sound is heavily inspired by the ‘spiritual jazz’ movement of the 1960s and ’70s, which was pushed forward by the likes of Pharoah Sanders, Alice Coltrane and Idris Muhammad.

“Everything about the We Out Here session was really last-minute and I think that brought an exciting energy to it. I wrote ‘Inside the Acorn’ the day before it was recorded, then brought the chart to the musicians on the day.

“Since we hadn’t rehearsed it, and no one had these preconceived ideas of what it was going to be, we were able to create something special. That’s the vibe for the whole album. We’ve captured a moment in time.” 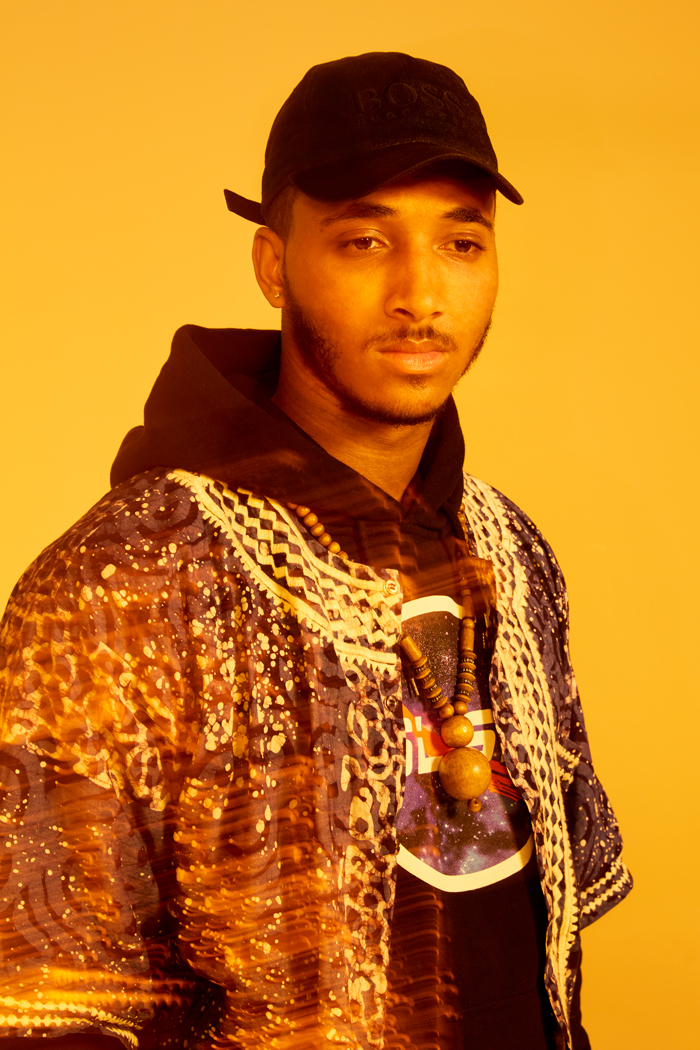 Dominic Canning is a 20-year-old keyboard player from the band Triforce. His playing creates the melodic backdrop for a more mature sound that pulls together all sorts of influences in a package threaded with groove.

“Our music finds common ground between jazz, grime, neo-soul and prog rock. London is so diverse that you pick up all these influences without realising it. That’s reflected in what Triforce is.

“There’s the Caribbean side but also the African, and so many other things. I’m pretty new to the jazz game – and so I think I’m finding ways to bring everything I have ever heard into the frame.” 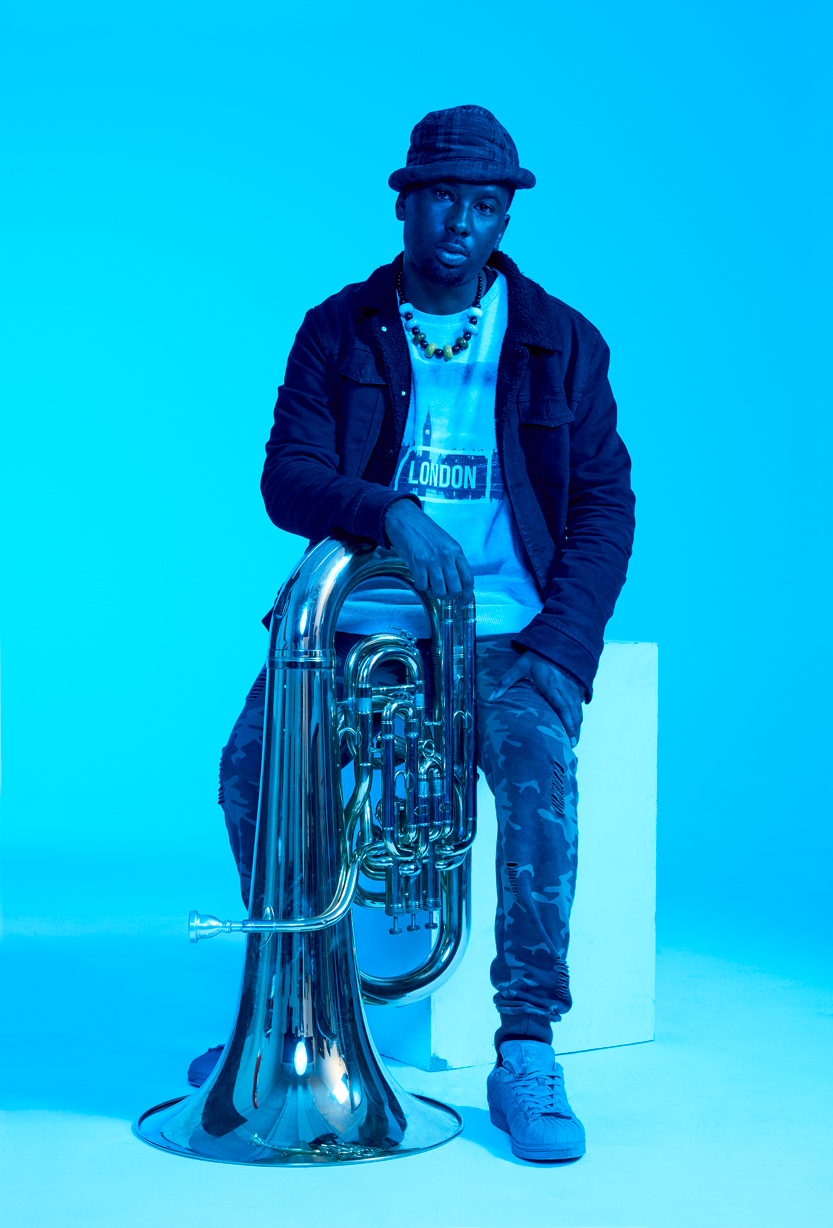 Theon Cross is a tuba player who was born in 1992 and raised in Brockley. Mentored by Andy Grappy, who was at the centre of influential late-’80s powerhouse the Jazz Warriors, Theon’s sonic alchemy draws from the history of New Orleans jazz while locking into a tight, contemporary sound.

“Before gramophones were able to record jazz, the acoustic upright bass wasn’t loud enough to be heard on recordings, so the tuba was there to beef up the bass lines. It was effectively the first bass of jazz. Acoustically, the tuba resembles a lot of synth sounds that you hear in grime and trap.

“I feel like my contribution is to bring a hype tune that has all the energy of other types of music – but in a way that hopefully adds to the music’s legacy.”

We Out Here is released 4 February via Brownswood. The album’s launch party takes place at London’s Total Refreshment Centre on 25-26 January.

Linkedin
RELATED ARTICLES
OTHER ARTICLES
Photographer Becky Tyrell went down to the fading banger and stock raceway to meet a community desperate to keep it alive.
Following the release of his debut single, Deyaz talks battling addiction, dealing with his struggles through music, and building a budding music career from his living room.
As she gears up for the release of her first book, the 24-year-old climate activist talks standing up to authority and building a more inclusive movement.
A new podcast is opening up the conversation between trans women and trans amorous men in the hope of building coalitions.
David 'Dee' Delgado’s photo project is about honouring and uplifting the city of his youth, and a world rapidly disappearing under the relentless onslaught of gentrification.
After building his reputation covering the US civil rights movement in the 1960s, the photographer went on to produce some of the most enduring images of the past century.