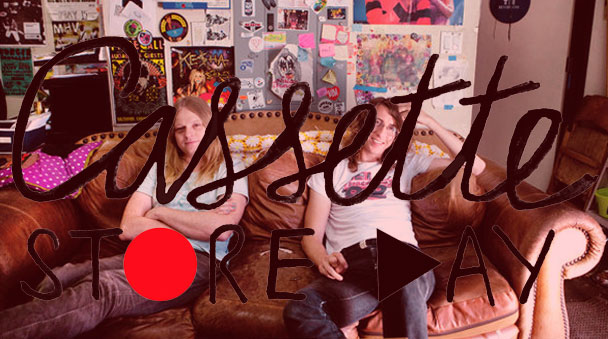 Sean Bohrman of Burger Records celebrates the tape in the run up to Cassette Store Day this Saturday, September 27.

Sean Bohrman of Burger Records celebrates the tape in the run up to Cassette Store Day this Saturday, September 27.

In the run up to the big day, this Saturday, we’re asking some of the diverse Cassette Store Day artists to tell us about their favourite cassettes and explain what the humble tape means to them. Third up is Sean Bohrman from Burger himself.

What was the last cassette you bought?
Nelly, Country Grammar.

What’s the best cassette artwork you’ve ever seen?
I have the 3D LA Guns Hollywood Vampires tape in front of me that has tiny little 3D glasses that come with it.

What’s the best mix cassette you ever gave/received?
DJ Kid Slizzard, For The Weed Smokers – never ever gets old.

Why are cassettes awesome?
Because we can listen to them in our van.

What cassette release are you most looking forward to this store cassette day?
Various Artists – Psicotrópico: Dispatches from the Puerto Rican Psych and Experimental Underground (Discos Diaspora).

Linkedin
RELATED ARTICLES
OTHER ARTICLES
The New York rapper pushed hip hop into bold new realms. He lived through a dark time – but with one hand on the mic, he survived to tell the tale.
Cassette labels across the UK and the US celebrate the analogue format September 27 with new releases, rare reissues, special gigs and all-out tape-themed geekery.
Burger Records founders Sean Bohrman and Lee Rickard reflect on foul-mouthed weirdos, saving lunch money to buy records and 'The Stooge Mobile' of their suburban youth.
Surfer and musician Alex Knost on stealing cigarettes, fancying Liv Tyler and bad hygiene in his suburban youth.
Artist, writer and 'zinemaker Jocko Weyland exhibits a collection of his cassettes, 1980-2005, in San Francisco.
Behind the scenes at the Growlers photoshoot at home in Orange County with rad Encinitas-based photographer Embry Rucker.