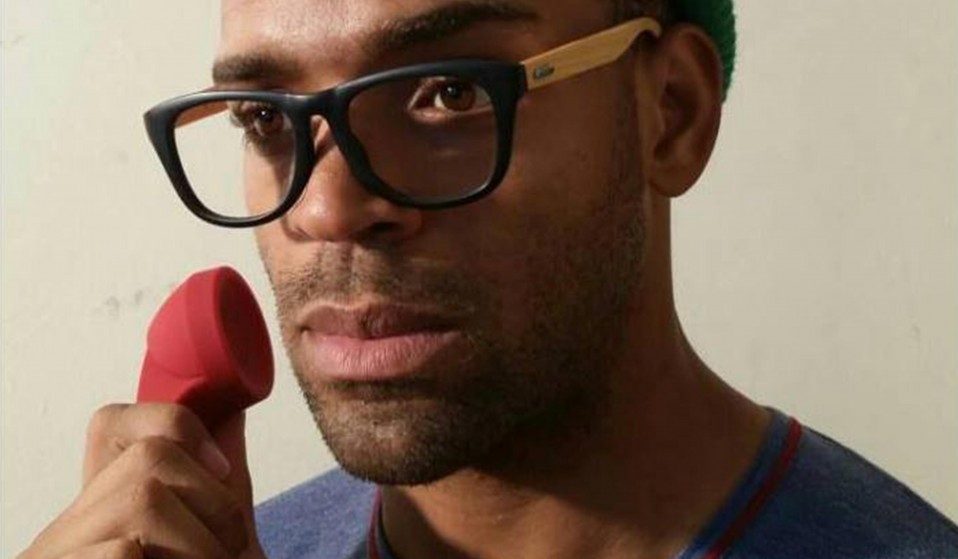 “I think Busdriver is the greatest living rapper, if you look at his resume, if you look at how long he’s been doing it,” Milo recently told Interview magazine. “I’m talking a career player right now, I think he’s the greatest living rapper, innovation and the fact that he’s never had a manager, he’s piloted his own career just off that, balancing the business and rap.”

Born Regan John Farquhar, Busdriver may be the greatest rapper you haven’t discovered yet. Surrounded by rap from an early age – his father wrote Def Jam biopic Krush Groove – his prolific and pointed style has woven its way through the music scene since he joined South Central LA’s Project Blowed circle at age 16.

Huck caught up with Busdriver to talk about staying credible, his poetry book, and how he handles the creative impulse.

So, how do you balance your business and rap?
I recommend that no one pay attention to anything, business-related in music. But if you must, it’s good to have a sense of humour about it.

What makes you so different in your approach?
I tend to not be really afraid of language, and I have a different background, I have a strange, hard-to-pin-down background so I tend to have instincts that are “unconventional” when it comes to rap. But the thing about me is that I come from a tradition of guys who come from a similar angle. I think my career has always been about me trying to rediscover that community, to kind of trace, to kind of find these wild threads of rap-related music. That’s been my journey.

Have you always been involved in collectives of like-minded people?
Well, it’s good to have a world to exist in. But you know it’s good to find a world in which you can be isolated within. That’s kind of just where that framework came from. It’s good to have a context. I think a lot of why I do the music I do is because I grew up with heavy jazz being a huge component of my endeavour as an “MC” or “a rapper.” It’s lent itself to a kind of freewheeling creative outlook.

I haven’t really changed how I’ve done things in a long time so I don’t really know what’s new. I haven’t really done anything new in a long time. I’m just playing out the ideas and there’s a wealth of material to play out. That’s all I’m really doing. I’m influenced by places I go, but the influence is less overt. It’s more subtle — just language and governance and injustice. Things like that influence me and points of view influence me.

What was Perfect Hair about?
It was supposed to be about Social Darwinism; an appearance, maybe a racial element. I came up with the term “perfect hair” in accordance with some of the race sciences the German eugenicists Eugen Fischer, how they would determine people… Where were they, Namibia? How they would determine their ethnicity and a big indicator would be hair. I always thought that was a really powerful image to have your hair symbolise your inclusion into this default “approved identity.” So I just riffed on that. But the record veers, it goes here and fro, but that was a definite driving motivation.

You started rapping as a response to the LA Riots, are politics still a big part of your music?
Well, politics is bullshit.

I don’t really prescribe to one point of view or pay attention to politics. But the political theatre we bear witness to, that’s an apparatus in itself and I don’t know if I have enough information. I think world matters and the abuse of power is very important to pay attention to. But I don’t know… I think art is just important itself. That’s definitely how I got into the game, the rap group kind of spawned off the Rodney King incident, but to me that’s kind of central to what rap music is all about. It’s always been protest music to a certain extent. It’s always been a huge component of American music and of black music. As protest music, the rudiments of the blues still instruct us on how to write songs. So I kind of just attach onto that old lore. That whole way of doing things.

Your songs are full of humour, self-deprecation and some seem deeply personal. How do you integrate elements of your personal life in your music?
There’s usually a humour in things that I relate to most of the time. Humour is very important in hip-hop, that’s just a device. But I may do a story that delves more on a personal matter, as an experiment to see if my life can produce a universal theme; as an experiment. But they’re all just exercises and a kind of writing. There have been a lot of songs about heartbreak because I always have felt that’s a kind of theme people gravitate to, and I think if I’m making a song for people that’s what I should experiment with. But when I do that, it tends to be not as inclusive as it could’ve been.

You’ve just finished your European and American tour. I saw you in London and it was probably one of the best gigs I’ve seen in years.
I am always surprised to see kids come out and see what they hear. Touring the US is tough but I love doing it. It was an uncommon privilege, I really always want to give audiences more. Make them feel that I have something special for them.

And you’ve also just released a limited edition poetry book. How did people react to it?
I don’t know. I wrote another one but I don’t know what I’m going to do with it. I mean people enjoy it. My small following seem to enjoy it and I appreciate them enjoying it. Poetics and hip-hop is something I’ve always explored. I don’t think my writing is as poetic as it used to be but it can be if I want it to take the time to. But I did write a new book, that’s similar to Shirt, that’s kind of a quick poetic burst, and that collection of poems. And hopefully I’ll find something to do with them.

Does poetry come from the same place as rap?
Writing that book of poetry was really just kind of a reaction. I just did them improv really quickly. Writing poetry and writing raps can come from a similar place. But they shouldn’t, writing raps should be a form for a more visceral response, with rapping there’s a relationship between the text and the delivery. There needs to be a really strict relationship to meter and how you’re going to kick the rap, with poetry there’s less of a regard to that. I’m really surprised more people don’t rap because it’s really cathartic. It’s meant, it’s literally meant to uplift you, it’s a practice made by disenfranchised young people to enrich their lives. If you do it for a couple of years, you get a lot out of it.

Check out Perfect Hair from Busdriver.

Linkedin
OTHER ARTICLES
Protestors gathered outside Downing Street following the latest atrocities committed by Israel against Palestinians living in the besieged strip.
With the virus now a global health emergency, we must take steps to fight misinformation and demand a swift UK-wide vaccine roll out, writes Phil Samba.
A series of photos by the late Jerry Dantzic taken in 1957 show a tender side to the iconic Jazz musician.
A sharp increase in officers armed with the electrical weapon is resulting in serious injuries and deaths.
From the early originators to the female writers at the forefront of today’s scene, we talk to the artists redefining graffiti’s consciously macho origins.
In the latest instalment of Photographers in Conversation, the creator talks portraiture, platforms and taking inspiration from Little Simz.