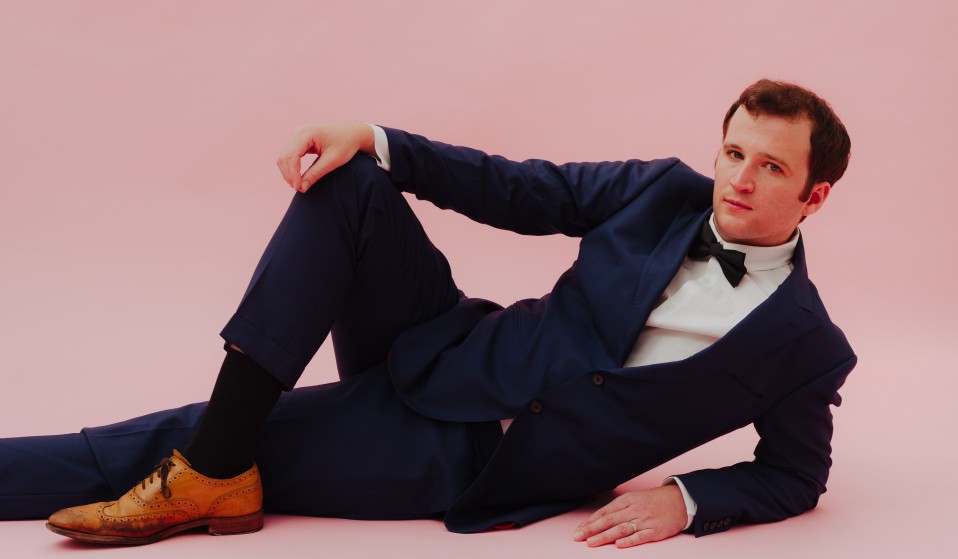 In Man of the World, Vampire Weekend's Chris Baio deals with the aftermath of the Trump election, addressing his own feelings of anxiety and guilt as an American expat living in London.

In Man of the World, Vampire Weekend's Chris Baio deals with the aftermath of the Trump election, addressing his own feelings of anxiety and guilt as an American expat living in London.

Chris Baio is not, at first sight, your typical ‘protest record’ kind of guy. When we meet near a park in Peckham, South London, it’s during one of the first sunny days of the year. He’s wearing a white blazer and vintage sunglasses, swigging on organic lemonade. He’s friendly and soft-spoken, with a strong New York accent laying heavy on every word. He’s also the bass player of Vampire Weekend, one of the cheeriest bands out there.

Yet despite appearances, Chris – who performs under the moniker Baio – just released his second album, Man of the World – and it’s unapologetically political. Only it isn’t fuelled by seething anger. Rather, it explores other, more frustrating emotions that have become just as familiar to our generation: anxiety, hopelessness and fear.

We settle down under a tree near the basketball court. As two expatriates living in London, conversation inevitably turns to Brexit – the political event that kicked off the whole album.

“I was travelling from London to Berlin when the vote results came through,” says Chris, still sipping his lemonade. “When I landed in Berlin and turned my phone back on, it had been announced that Cameron was stepping down. We de-boarded the plane, went through passport control, and immediately saw the EU logo everywhere.”

“The sensation was that I was living history,”  he adds. “I think you can pass through your life and be unaware of what’s happening in the world, focus on your day-to-day, but in that moment I was really struck by what was happening. I felt a fear for the direction the planet was heading in, because I love living in London. I love how post-national it feels. The vote on the referendum was kind of spitting in the face of what I love about London.”

It was also then that Chris realised that the Trump presidency might actually become a reality. He became engrossed with reading news, and was increasingly concerned and anxious about the future of his home country. All this worry peaked in September, becoming unbearable. That thinking had to go somewhere, and so Chris sat down and went back to writing music, still fresh off his previous tour.

“I really was getting to a place where it was all I could read about, all I could think about,” he tells me. “Especially in regards to the US election – I stopped reading novels, watching TV that wasn’t the news. This xenophobia, racism, flirtation with authoritarianism and really open political violence was very unprecedented in my lifetime. Something crazy would happen every two hours, so you could refresh your Twitter feed, and it was almost as if there was a dopamine rush every time something new happened.”

Man of the World began to take shape as an attempt to escape the anxiety Chris felt over the direction the world is taking.

But much of the album is also based around self-reflection – and Chris’ analysis of his own complicity – with songs such as Shame in my Name written in the direct aftermath of the election results. In Dangerous Animal he voices disdain for climate-change deniers, while acknowledging his own environmental footprint as “a travelling musician who eats meat”.

Having been a Londoner for the past four years, Chris is a Labour supporter and keeps up with politics regularly, albeit not to the same extent as he does in the United States. But I’m curious as to how he navigates this dual identity as someone who can’t vote in the UK. What does it mean to live in a city where people make decisions on your behalf? And how does it feel to not see the results of your political participation back home?

“I find I take US politics way more personally when I’m over here than when I’m over there, in a weird way,” Chris muses. “I think that when you leave your country, you carry it with your identity – when I’m away from America is when I feel the most American. This kind of fear and worry for America is stronger when I’m away, because I feel almost like a representative for this country where a lot of crazy things are happening in everyday life.”

“I guess that’s how the identity shifts and feels weird and different,” he adds. “I feel much more self-conscious. Even when I go to my local and order beer in my American accent, no one says “Truuuump!” But I still feel like I carry it with me, and I carry some shame with it.”

After all this self-reflection, in England and in the US, external and internal, has he reached any conclusions?

“The result of the election, the fact that Trump won and Clinton lost, will be affecting people’s lives. I think when you follow what’s going on with immigration, customs enforcement, the raids that are happening, and the rate that non-violent offenders are being deported at – that’s a real direct result of the election in America.”

Although Man of the World is an exercise in brutal self-reflection and addresses very heavy subjects, it is by no means a collection of sad songs. Recorded in Brixton, as a nod to Bowie, one of Chris’ favourite artists, Baio’s latest offering has humour, and plenty of hope, still boasting with Chris’ unique sounding groove and soothing vocals.

Elections have consequences, says Chris. It’s where we go from here that matters.

“No single person can stay up on everything that’s happening in any country, but for me, because of my strong disgust for this administration, I need to find ways that I can counter them, at least in some specific area that they’re having some success at. Does it make any grand difference? Probably not. But as one person, it’s what i’ve been doing lately. I’ve given money to charity regularly for a long time, but it’s never necessarily been politically oriented. I’m doing that more now.”

As we get ready to leave the park, I remember to ask the question that’s been bugging me all day.

“What’s with all the pictures of Vin Diesel on your Instagram?”

“Oh that,” Chris laughs. “I just found photos of him to be oddly calming and soothing in the immediate aftermath of the election, when I was really distressed about the world. There’s something kind of soothing about Vin Diesel.”

Man of the World by Chris Baio is out on June 30, and and available for pre-order on his website.

Linkedin
RELATED ARTICLES
OTHER ARTICLES
The idea that a younger generation is abandoning work has become a popular narrative online, but it doesn’t necessarily reflect reality.
Yesterday thousands gathered outside Buckingham Palace after news of the Queen’s death broke.
Following the announcement of an 80% hike in the energy price cap from 1st October, crowds gathered outside the offices of energy regulator Ofgem to protest and declare their intention to undertake a payment strike.
Cindy Campbell recounts how her brother ushered in a new era of musical culture at a party she held in the Bronx in ‘70s.
In his 2008 series, the photographer pictured himself as Angela Davis, Martin Luther King Jr., Malcolm X, and other prominent figures.
The two-day long event returned to London this year, showcasing a spectacular parade, steel bands and Caribbean food.