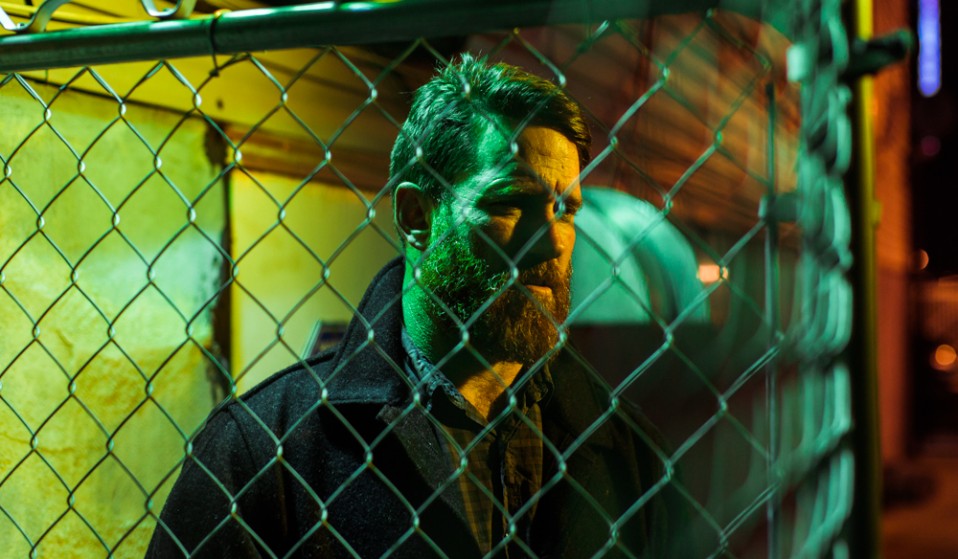 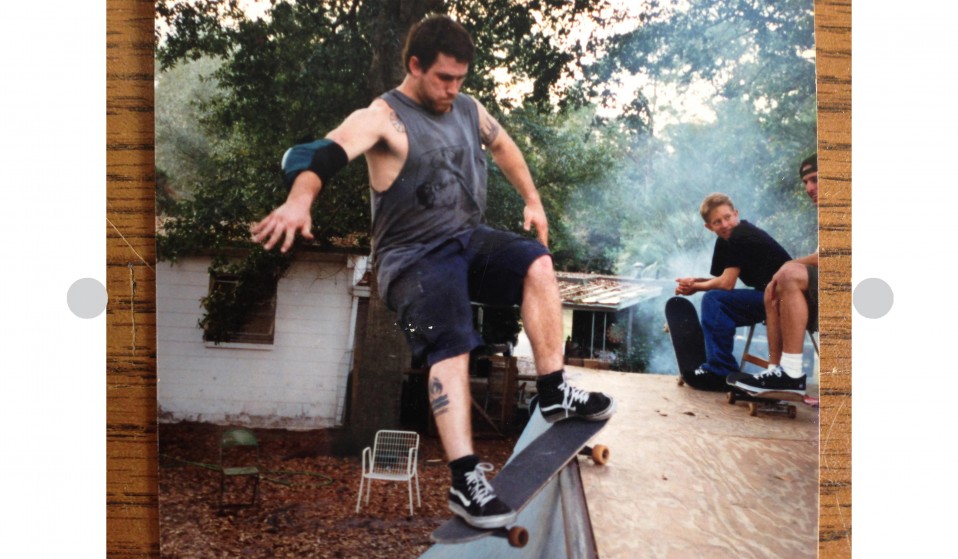 It’s hard to imagine punk rocker-turned-folk hero Chuck Ragan behind the register at Wendy’s. But as a fifteen year-old runaway, that’s where he was. The plan was simple; get through one week in a fast-food joint, collect a pay cheque, and hitch the hell out of Florida to California. Had that happened, Gainesville’s much-loved punk outfit Hot Water Music may never have been. Instead, his life took a detour. Not thirty minutes into his first shift, a cop walked in: “Are you Chuck Ragan?”

It’s a fine fall evening in New Brunswick, New Jersey, and Chuck and I are walking up Easton Ave. to get dinner before his show at the Court Tavern. Red Bull Sound Select brought him to the city for an intimate solo show, with three other punk-inspired acoustic acts. “I’ve set up whole tours around the steel head run,” says Chuck in a gravelly Southern, drawl. He’s talking about fishing – a passion he cultivated growing up in Florida, and maintains near his self-built home in Northern California.

Chuck is a Southern boy. (He actually refers to his maternal grandparents as Maw Maw and Paw Paw.) His mother was a singer/ventriloquist and his father a golf pro. They moved around the South a lot – Texas, Georgia, Tennessee, Louisiana and finally Florida. One grandfather played guitar, the other accordion, so Chuck and his brother Paul were introduced to all manner of Cajun; country, gospel and bluegrass.

Another conduit to music was skateboarding. “There was music leaking into my life whether I was looking for it or not. When I moved to Lafayette in the mid ’80s, I was meeting people, going to a buddy’s ramp, rolling around, and getting hippers so bad that I couldn’t even go to school. All through that, I was getting all these mixtapes – music I wasn’t allowed to listen to like Bad Brains, The Germs, Chili Peppers, The Beastie Boys, old Metallica – whatever was getting us fired up. It scared me, shocked me and excited me, all at the same time.” 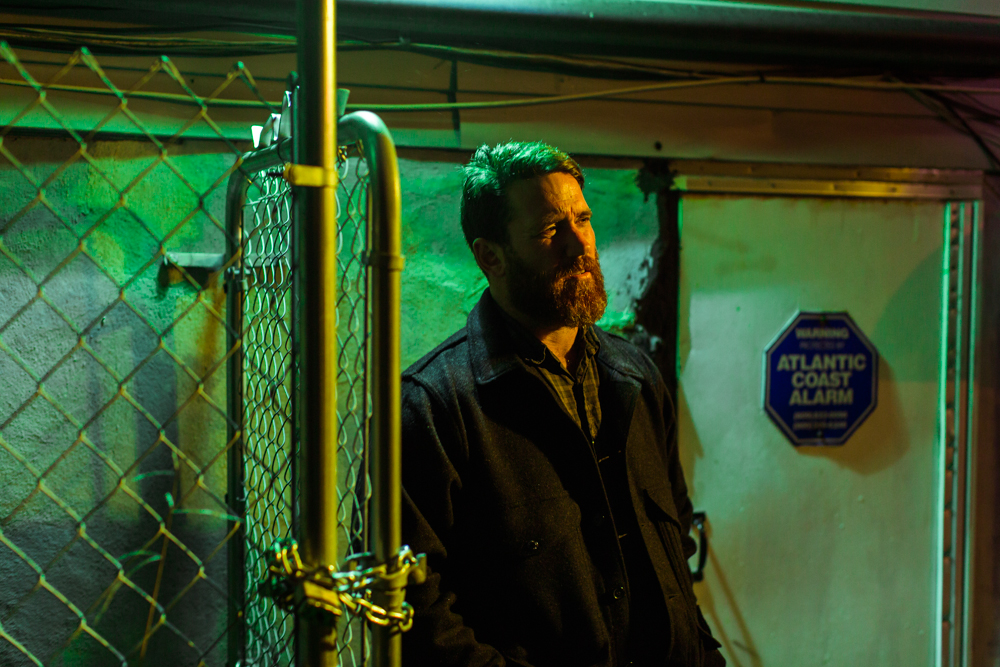 By the late ’80s, his family had moved to Florida where Chuck found a new group of rebels and continued on the path of disrupting his family. He started experimenting with sound thanks to a family friend, Roy Ridenour, who had tried to make it as a travelling musician in the ’70s. “We would sit around and play old Townes Van Zandt songs, Dylan, or Muddy Waters,” says Chuck. “I don’t know if he has any idea what an impact he had. That’s where I found folk.”

Chuck’s mother, who often worked on cruise lines, would sometimes take the family along. When he was twelve, they found themselves at an open mic night at an Alaskan lodge and Chuck took his acoustic guitar on stage for the first time. “It was terrifying and beautiful,” he reflects.

Like a lot of kids who found four wheels and Bad Brains, Chuck was rebellious. But he took it a little further than most, running away from home several times. The ballad ‘Geraldine’ on his first solo record, Feast or Famine, is a soul-baring ode to his mother. He recalls being expelled from one school and let into another, just to, “Mess that up as well.” In fact, Chuck often skips the next chapter of his story and jumps to the formation of Hot Water Music. But his life was about to take a profound turn.

“I missed a lot of stuff that teenagers take for granted, but I wouldn’t have had it any other way.”

He doesn’t get into what he did to get sent away. But Chuck was escorted from Wendy’s that fateful day and wound up at the kind of hell-on-earth detention centre that he’d heard rumours about – for the most depressed, violent, and addicted kids; a seven-step, long-term rehabilitation centre, The Life Program. Living under fluorescent lights, he was forbade shoelaces and a belt, much less music. He didn’t leave for three years. Though Chuck completed the programme in fourteen months, he was asked to stay on and become a paraprofessional facilitator, counselling kids who were his own age or older. The Life Program turned out to be a major turning point. “I missed a lot of stuff that teenagers take for granted, but I wouldn’t have had it any other way,” he says.

He came out of the programme with a spiritual perspective – “Nothing religious, by any means,” he quickly adds – and rekindled a belief that music could open up a whole new path.

After the programme, Chuck immersed himself in Sarasota-Bradenton’s hardcore music scene. Along with a crew of other bands he made plans to move to Gainesville, where underground music was thriving, but in the end only George Rebelo, Jason Black, Chris Wollard and Chuck actually went. They defaulted into one band. To this day, there has never been another member of Hot Water Music.

Living in an apartment where they couldn’t plug into amps, every song was written acoustic. “Our sound developed from four guys who listened to everything; skate rock, jazz, country, classic rock and whatnot. There were all these strange elements colliding,” says Chuck.

Growling over complex layers, Chuck became a pillar of punk rock at a time when the scene was reigniting. Through the ’90s, a new generation was able to build careers that lasted more than two or three albums. Hot Water Music was right in that mix.

“It was important to us to play until we were bloody, raw, and busted up, and to learn how to become better people, better friends, through music,” he says. “I feel really lucky to have had it go the way it did… Just meeting people and finding the ethics that I did. Part of it has to do with how I was raised. How my mother and father taught me to treat others – and part to do with who we met along the way.”

Linkedin
RELATED ARTICLES
OTHER ARTICLES
Scottish photographer Ivar Wigan explores urban poverty and the lives of marginalised groups in North America’s Deep South.
Cochise led the Satan's Sinners Nomads street gang on New York’s Lower East Side in the late 1980s. After being sent to prison for the attempted murder of two gang members, he turned his life around and now makes art.
This year Huck is going in search of a manifesto for indie culture - a crowdsourced how-to guide where everyone shares a little something they picked up along the way. First stop: Origins. Stories of new beginnings and authentic roots.