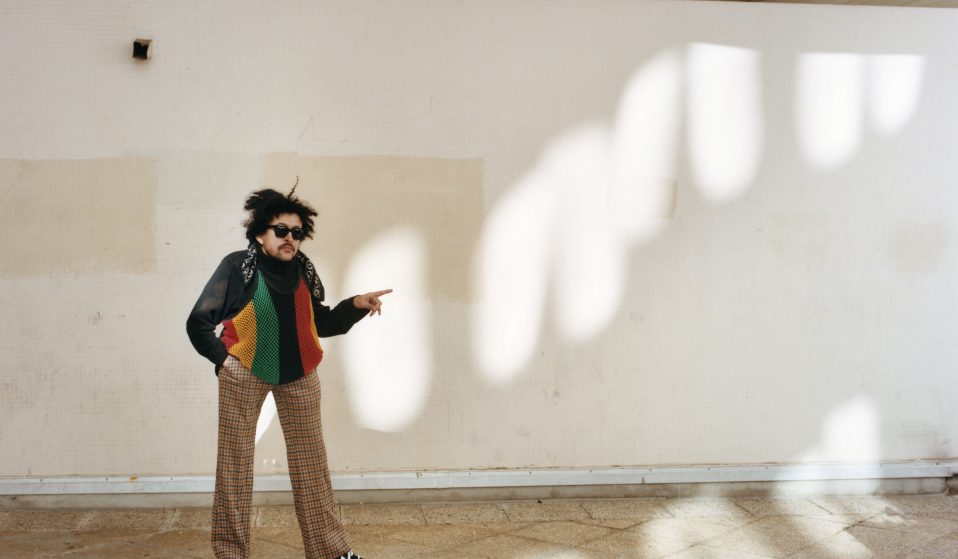 Whether its the mistreatment of immigrant communities, or his experience living as a disabled person in Trump’s America, the singer and multi-instrumentalist is ready to speak up.

Whether its the mistreatment of immigrant communities, or his experience living as a disabled person in Trump’s America, the singer and multi-instrumentalist isn’t afraid to speak up. For Cola Boyy, music is a tool for change.

Californian summers in Oxnard, Ventura County played an important role in the formation of Cola Boyy.

Whether it was the sweltering afternoons spent sandwiched into a blow-up pool with his twin brother and their father listening to Bob Marley, or, years later, the punk gigs he’d attend as a teen during the long, summer evenings, Oxnard – the place he was born, and where he still lives today, in the same house he always has done – was pivotal in creating the artist he is today.

There’s the sound that feels particularly indebted to his hometown: a luminous blend of disco, funk, Latino and pop, of which is suitably representative of Oxnard’s rich cultural diversity. On top of that, the palpable, non-conformist energy – one that informs both his musical input and his commitment to local activism – is impossible to separate from his time in the city’s punk scene (Oxnard, thanks to the “Nardcore” movement of the ’1980s, remains somewhat of a mecca for those affiliated with the genre).

Real name Matthew Arango, Cola Boyy is an artist who recognises the platform he’s been granted. He’s proudly vocal on a number of issues that exist outside of his music, from the mistreatment of immigrant communities to his experiences as a person living with a disability – he was born with spina bifida – in Donald Trump’s America.

“A year from now, yeah, I hope I’m alive,” he says. “I hope that I have some more cool instruments to play and record with. I hope that I’m meeting more disabled people, more politically-minded people, those who are fed up and believe in the people. People that can fuck some shit up – in a good way, a transformative way.”

On a suitably warm Oxnard morning, the 28-year-old singer and multi-instrumentalist sat down with Huck to talk representation, radical politics and whether the darkest times result in the best art.

What’s your earliest memory of performing?
Something in me always wanted to perform in front of people. I remember my dad’s 40th birthday, when my mom threw a big old party for my dad. I don’t remember what song it was, but I just remember dancing in front of everybody – I must have been like six or seven. There was something in me that wanted to do that. I’m surprised that my young self wasn’t worried to go up and do that. I was super willing.

Your real introduction to music came through the Oxnard punk scene though, right?
Yeah. It was super fun. Junior high school, eighth grade, when I started playing guitar, I met kids in school who were punks. They were nice to me. I got bullied a lot in junior high, but these kids were welcoming and always inviting me to shows and stuff. We all became really close. There were shows every weekend back then. You’d see the same band so many times you’d get tired of seeing them. We take that for granted, now – there’s nowhere to fucking play.

What did your time in the scene teach you?
I had a lot of anxiety growing up – going to punk shows let a lot of that loose. When you’re a teenager and you’re going out getting fucked up, being in a part of town you’re not supposed to be, it was helpful for me in coming out of my shell and feeling a little more comfortable with myself – in my skin. I was able to dress kind of funky, too. And I was around people who don’t necessarily judge – at least not in the same way that the average person would. A lot of people I met I’m still friends with to this day.

I wanted to bring up the way you dress, actually. You have an awesome sense of style.
Oh, thank you! it’s funny to mention that, cos just the other day I was hanging out with a friend. She told me, ‘yeah, you always had fucking style.’ But I look back in pictures of myself and I think, ‘oh man, what was I thinking, what was I wearing?!’

It goes back to junior high, elementary school. I always wanted to look a way that [made me] feel good about myself. In elementary school, I was super into hip hop, R&B and all that shit. So I had my mom buy me that season’s Fubu and all this fly hip hop gear.

But there was still a part of me that wasn’t fully confident, either. The clothes wore me more than I wore the clothes. I think there was something in me that wanted to not give a fuck that I was disabled, or I looked this or that. I just wanted to experiment and wear weird shit – cool shit. 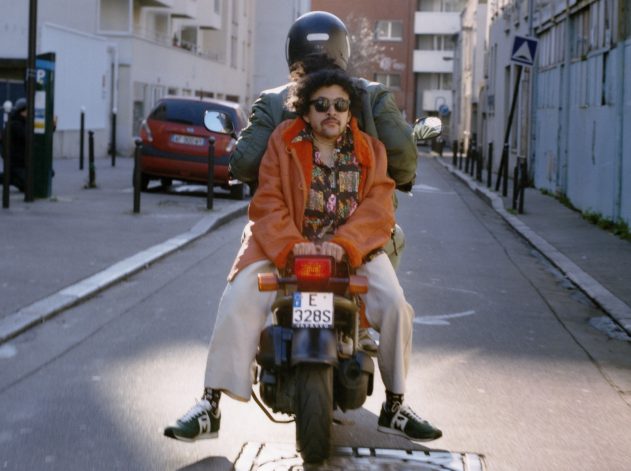 Growing up, how important would it have been for you to see someone that looked like you – a person of colour, with a disability – up on-stage making music?
Oh man, that would have been awesome. I’m sure I would have loved it, I’m sure it would have impacted me. But I kind of want to say [that] I think I would have a better grip seeing it now.

How so?
When you’re a kid, you have an understanding, but there’s also something in which you don’t really understand the dynamics of what you are – the things that make you different. I don’t know if it would have really struck me, or if I would have understood, because at that time you just think you’re the same as everybody else – you don’t really have a grip on the differences.

But I would say that I hope now that I can be that person. I want to be able to have conversations. I wanna be the person to say, ‘yo, let’s have a conversation, let’s get together and talk.’ Even if somebody isn’t a musician, how can we work together on something? How can we build something together, now, in this moment?

If you could go back and talk to that kid – you – and give him one bit of advice, what would you say?
I would say, ‘keep doing what you’re doing, don’t be too hard on yourself, what’s going to happen is going to happen based on the risks you take and the decisions you make.’ I would tell him that he’s doing what he’s supposed to be doing.

… Actually, wait, I don’t know! I don’t even know if I would say something. I would probably just, like, watch myself. That actually sounds creepy, an adult man just watching a kid, kinda fucking weird. But maybe I wouldn’t talk to myself!

Let’s talk about your activism. You’re part of an organisation called Todo Poder Al Pueblo.
Yeah. The group started about eight years ago as an immigrants’ rights group. It’s an 80 percent Latino population here in Oxnard, much of which are immigrants, much of which are undocumented. So, you can imagine that immigrants and undocumented people are not treated very well by the state.

There’s an abuse of power by the police and the landlords and the farm owners. There’s a lot of exploitation. So this group was formed to organise with and for the rights of the immigrant community. Rallies, gaining public support, putting public pressure on these mechanisms.

I joined about two years ago. I started getting politicised – truly politicised – about two and a half years ago, around when Trump announced he was running for president. So I joined a reading group where we analyse the news. I slowly became politicised from that, and then eventually it organically turned into me joining the collective, which is a separate entity, but had members of the collective in there. From then on, I was into that shit.

Do the darkest political climates result in the best art?
I think that any environment has an effect – a material effect, an ideological effect, a cultural effect – on the things that exist within it, whether it’s a positive or negative environment. Let‘s say we live in a world free of oppression, free of exploitative conditions, I would still like to say that awesome, dope music and art is still being made, based on the happy, positive, non-exploitative environment. You know?

How do you feel that your music and politics serve each other?
Before I was politicised, I used to be in punk bands. Punk music is very political. I wouldn’t say I had a focused ideology, but I knew I was angry and had opinions on shit. But as far as this stuff goes, it was never intended to be ‘political’. But looking back, I was writing songs based on narratives – narratives, the way that I looked at them, that were very political. My experience as being a disabled person and how that shaped my outlook on things and my perspectives, that’s something that showed in my lyrics prior.

Nowadays, with the lyrics, I’m definitely sneaking in a lot. Not words, but messages, little nods. It’s becoming more consciously political, while still – at the same time – keeping that pop-iness, the illusion of decadence. With that aspect, as far as content goes, I think it’s serving me pretty well. I see my music career as a hand in my organising, a tool in revolutionary purposes. Right now, having this conversation with you, I’m using that musical platform!

Today, in Trump’s America, you’re obligated to say something. A lot of artists, in interviews, they say what they’re saying. It’s dope that they’re speaking out and standing by marginalised people. But, I’m excited – and hope to see – some further growth in transformation in those people, those artists’ ideologies. Some further political development, you know? Because I think it’s important to study and read to better understand these fucked up conditions, and also understand how we can fight them and we can destroy them. 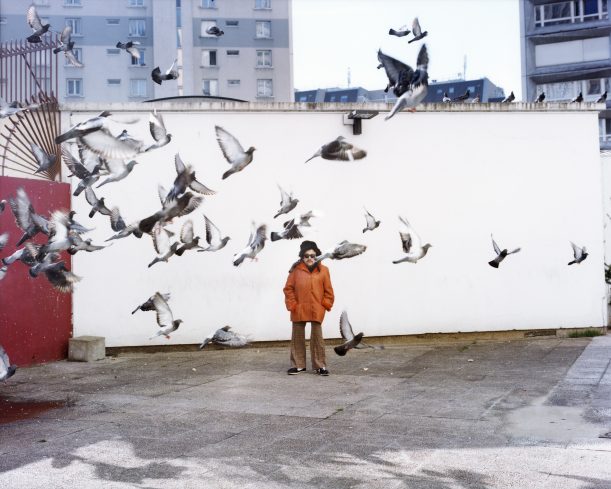 Linkedin
RELATED ARTICLES
OTHER ARTICLES
For decades, an area of East London has served as a community hub for Vietnamese people looking for a taste of home.
Photographer Matthew Brookes recalls following a group of young people in Venice Beach living in search of the perfect wave.
The past five years have seen a staggering increase in foodbank usage across the UK. Now, staff fear things are set to get much worse.
Thomas Hoepker‘s images taken during a road trip across America provide a searing social commentary about a divided country.
Photographer Arthur Grace recalls travelling through the Soviet Bloc and finding ways to evade the surveillance of his work.
A new edition of a seminal book brings together iconic images of the band onstage in their full glory and backstage in moments of unguarded camaraderie.