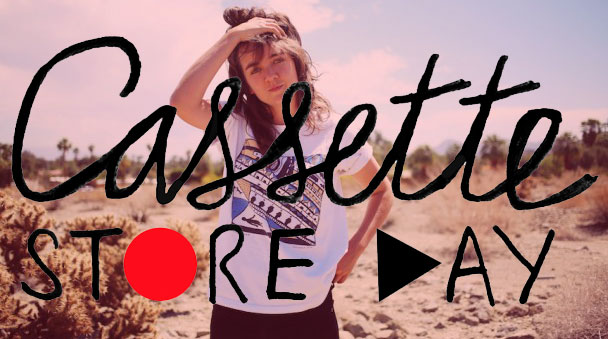 Australian singer-songwriter celebrates the tape in the run up to Cassette Store Day this Saturday, September 27.

Australian singer-songwriter celebrates the tape in the run up to Cassette Store Day this Saturday, September 27.

In the run up to the big day, this Saturday, we’re asking some of our favourite Cassette Store Day artists to tell us about their favourite cassettes and explain what cassettes mean to them. First up is Australian singer-songwriter Courtney Barnett.

What’s the first cassette you owned?
Ugly Kid Joe – America’s Least Wanted. Favourite tracks were Mr Record Man and Everything About You.

What was the last cassette you bought?
Bonnie Prince Billy.

What’s your favourite cassette ever?
Janet Jackson – Together Again.

What’s the best mix cassette you ever gave/received?
Nick Williamson made a mixtape for me and my bro. It was the only music we owned and we played it to death. It had EMF, Unbelievable. Jimi, Voodoo Child. Guns N’ Roses, November Rain. Nirvana, Lithium. Red Hot Chili Peppers, Give It Away. Spiderbait, Calypso. Killing In The Name Of…

Why are cassettes awesome?
They are the same shape as a packet of cigarettes but cheaper and better for you.

What release are you most looking forward to this store cassette day?
UV Race – Greatest Hits.

Linkedin
RELATED ARTICLES
OTHER ARTICLES
Martha Cooper’s photographs of New York graffiti in the seventies and eighties helped catapult hip hop around the globe.
Sini Anderson, director of Kathleen Hanna biopic The Punk Singer, on her seminal new Riot Grrrl film and the Fourth Wave of feminism sweeping the States.
Videos, writing and images from former Sonic Youth frontwoman and Huck 42 cover star Kim Gordon.
Artist, writer and 'zinemaker Jocko Weyland exhibits a collection of his cassettes, 1980-2005, in San Francisco.
With DIY Space For London Bryony Beynon is helping to create a long-term, sustainable social centre for DIY music, culture and radical activity in London.
Chan Marshall, enigmatic frontwoman of the cultish Cat Power, gives us the lowdown on some of the things she thinks are rad.