Art & Culture / Music / Is Craig David still a Tory? We try to find out 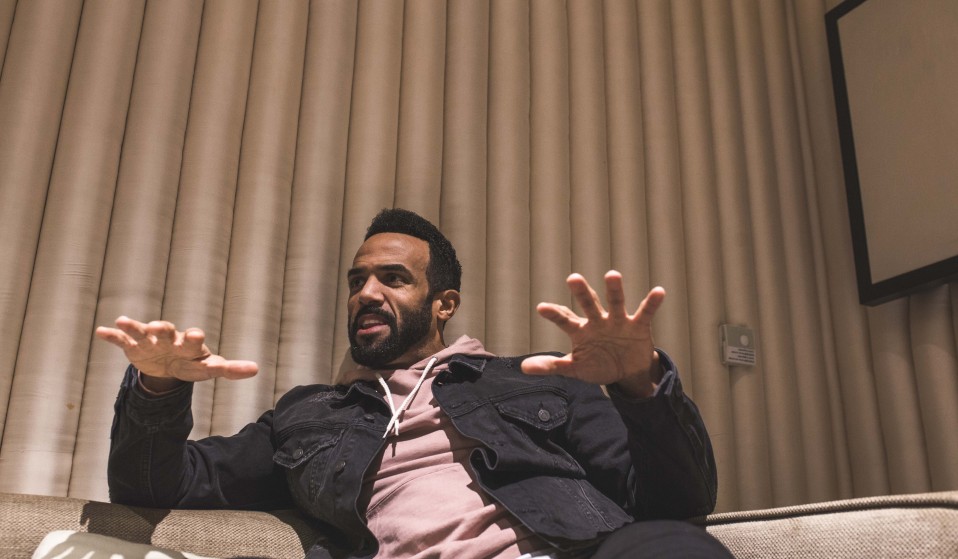 Back in 2010 Craig David made a DIY video and sang about supporting David Cameron. We sit down with the legendary pop star to ask him why.

Back in 2010 Craig David made a DIY video and sang about supporting David Cameron. We sit down with the legendary pop star, ahead of the release of his new album, to ask him why.

If you’ve seen Craig David perform since the cogs of his comeback got into motion, then you’ll have noticed that he’s genuinely thrilled to be back on stage, making music and performing. There’s a smile and an honest appreciation that’s striking when he’s looking out at his crowd at the end of a set. He knows all too well his second coming was never a given.

In the weeks before I’m set to meet him, I see him perform twice: once at a corporate Vodafone gig, and another at a sold out Brixton Academy. He has the voice of an angel. Both times I wonder whether I might be a little bit in love with him. Now, we’re sat together in a plushly kitted out room at his label’s Kensington offices, a busy day of promo lined up ahead of the release of his new album, The Time Is Now.

It’s like a childhood dream and I can’t stop grinning. I say hello, he says hi back. There’s a silence. He’s looking at me. Then I remember I need to ask him questions, that I can’t just stare at his face for 25 minutes.

“I always hoped in my heart that it would happen,” says the 36-year-old singer, when I finally ask if he ever thought that his moment had simply come and passed. “I had a realisation that I have this God-given gift to sing songs and to write songs, and that it would be such a shame to not utilise that.” 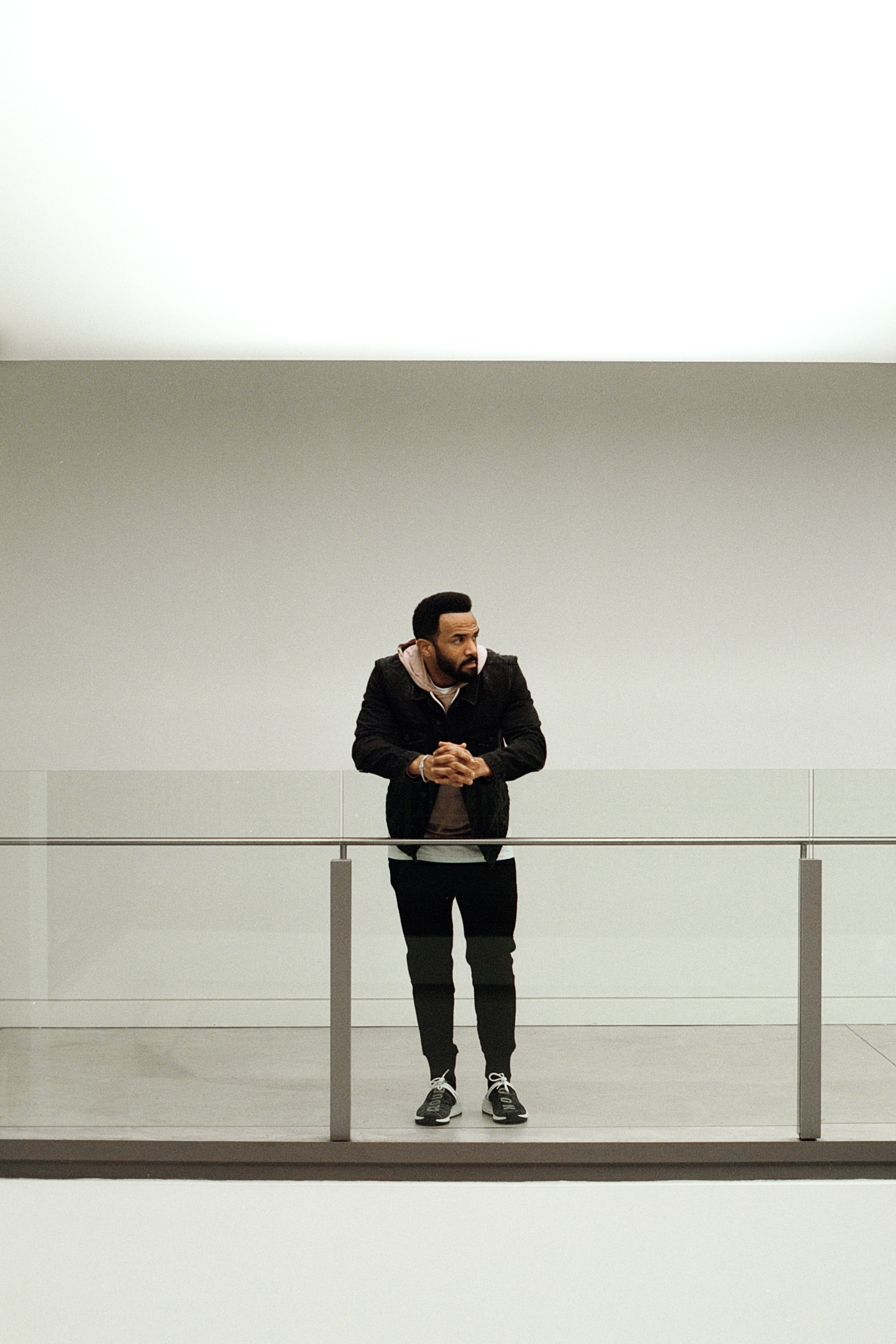 And, to be fair to him, what a comeback it has been. In the early 2000s, Craig David was everywhere: “Fill Me In” and “7 Days” both hit number one in the UK charts – his first two singles. “Walking Away,” “Rendezvous,” “What’s Your Flava” and “Rise and Fall” kept his chart-topping streak alive. Born To Do It, his classic debut album, sold some eight million copies worldwide.

But his third and fourth albums failed to make as big an impact, and by the time Craig David got to his fifth studio album – Signed, Sealed, Delivered – in March 2010, it seemed that he was starting to drop off the radar. Universal had only signed him for a one album deal, and after a poor critical reception and comparatively disappointing sales, Craig David found himself no longer signed. He moved to Miami and bought himself a plush white pad. His back catalogue of bangers endured, but so too did the endless Bo’ Selecta piss-taking.

“Do you know what I’ve realised? Everything was sort of necessary,” he says. “Culturally and musically everything felt right when I came back about two years ago.”

Now he’s got a new solo album about to drop. In 2017, he played Glastonbury’s Pyramid Stage after completing an arena tour. His nostalgia-driven TS5 set is, without doubt, the best 90 minutes you can spend dancing to UK garage. No wonder he’s excited.

“It was walking into the One Extra building with Kurupt FM and Mr Jam and Big Narstie when the stars just aligned,” Craig David continues, thinking back to when it properly hit him that the comeback was on. “Something really special happened in there. When I performed that freestyle – the “Where Are You Now” instrumental – and that went viral, it was a moment.”

“It’s so much sweeter to see all this unfold because you have to have something taken away from you before you really appreciate it. When you have the opportunity to do it how I am now? I got to play Glastonbury man! It was a lot. It was wicked.”

As conversation starts to flow, I find myself semi-consciously dropping song references into the conversation for no obvious reason. “It’s a real story of a rise and fall,” I offer up, and Craig laughs politely. “You really must have just felt like walking away,” I find myself blathering again, at which point Craig David nods, possibly growing tired of humouring me. Eventually, I drop my final song reference and steer the conversation to politics, a topic that Craig David has seemingly avoided in interviews until now.

“Can we just rewind back to 2010?” I ask him. It was then, just days before the general election, that Craig David released a video on his Youtube account with a slightly different tone to his RnB tunes.

[Three hours after publication of this piece the video in question (which was embedded here) was mysteriously  deleted from Craig David’s Youtube account.]

Craig David presses play on his car stereo. The intro to “Fill Me In” starts playing. Camera Woman is still holding her camera. Then Craig David starts to sing about David Cameron.

“Oh Mr Cameron wants to change what we’re going through,” sings Craig David, with his beautiful voice. “I hope that his policies will protect me and you.”

He carries on for a while, Camera Woman spurring him on. The song comes to an end. “They just need a bit of honesty,” 2010 Craig David says to camera, referring to young people. “A bit of honesty, and a bit of freestyle, and it’s all good.”

I decide to ask 2018 Craig David about it. He says he doesn’t remember.

“Okay so you’re singing to “Fill Me In,” and you’re talking about voting for David Cameron…” I begin. Suddenly, he seems to remember, looking a little uncomfortable.

“Oh that was some waste thing that man,” Craig David says, “I’ll go on record, because it does come back now. In that period, 2010, I was in a very… well, I was unsigned, listening to what people coming in… At the same time, interviews were coming in and back and forth. ‘He’s in a really sad place, he’s really angry about situations…’ And then given that in particular, I was doing some nonsense thing. I will go on record and say: I don’t know what was happening there.”

“What I’ve found is that the only way to overcome any sort of politics – and this isn’t just me being a hippie – is to make sure they resonate from a place of love.”

It’s a pleasant sentiment, one that most people wouldn’t really find fault with, but I’m still not entirely sure whether Craig David is a Tory. So I ask him again.

“Listen, you can easily get boxed into the duality: are you Jeremy Corbyn? Are you Theresa May? My thing is, if you feel passionate then I’m definitely down with people who say get out and vote, get out and vote. But I think that a lot of the young kids out there are boxed in as to who they have to vote for, because who they really want to vote for may not even be being represented out there fully.”

Craig David says he feels compassion and that he wants to make a difference, and that people are starting to collectively come together and say ‘we are seeing the madness here.’

“You’re still, by the question, defining it to be a box. A duality. You’re still saying you need it to be this or that. That’s what I’m saying, once you start to get it… What everyone wants is a good standard of life, full of opportunities, that they’re not repressed. That everyone can afford to enjoy life and has access to opportunities, an education that is not biased. It’s old and played out that you have to go to school and then university and then get married. I’ve just been able to relax, ease back. You’re seeing it happening. It’s not what my opinion is – who do I support, who do I not support. That’s why I’m not vocal about it, I’m not jumping up.”

Except in that video where he’s singing about David Cameron he is very much jumping in. I get the feeling it’s time to move, still not entirely sure as to whether he’s a Tory.

I suggest we play a game of truth or dare to cut through the tension (pulling out two bags of marshmallows and see if we could start off by seeing how many he can fit in his mouth), but he’s not biting.

“That’s not what I’ve come back to do,” says Craig David, which is probably fair enough. “It’s why I don’t want to talk about politics I’ve just come off the back of releasing an album I’m very proud of, I’ve got new music coming, and I just want to be a timestamp in people’s lives. I’m genuinely that guy, anything that deviates from it is nonsense.”

Instead, I ask what Craig David wants to do next, thinking if I have any chance of getting him to fall in love with me it might be best, for my final question, to steer us back to less treacherous waters. “I want to reinforce the album title – The Time Is Now. You realise it’s not always about getting to the next stage, or achieving that thing. This is the moment. If I’m resonating from a good place now then that’s cool.”

The next day I receive an email from a member of his team asking me to “refrain from including any of the political-themed content” from the time Craig David and I spent talking. I decide to indulge myself one final time in a game of ‘Use Craig David Lyrics In A Conversation About Craig David’. When it comes to talking politics, I really do think that The Time Is Now.

Linkedin
RELATED ARTICLES
OTHER ARTICLES
After fleeing the war in Ukraine, people are finding it impossible to secure affordable and decent housing in the UK.
After building his reputation covering the US civil rights movement in the 1960s, the photographer went on to produce some of the most enduring images of the past century.
The pro skateboarder withdrew from the 2020 Olympic Games so he could come out as trans. Now, he’s hoping to encourage others to live as their authentic selves – within the sport and beyond.
After a two-year hiatus and a new album, the Nigerian artist is riding high. Now, he wants to bring his alternative, genre-bending sound to the world.
After blocking the Scottish government’s gender recognition reform bill, Westminster is now devising further changes to the law to make it harder for trans people to self-identify.
A group of aid workers face prison for helping to save people fleeing their homes at sea. If they are charged, it will have a chilling effect on humanitarian efforts.