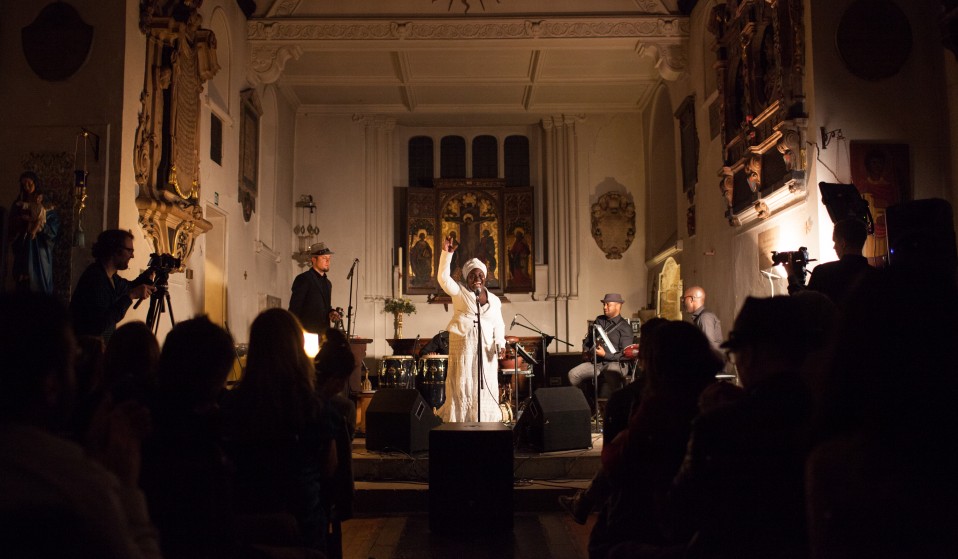 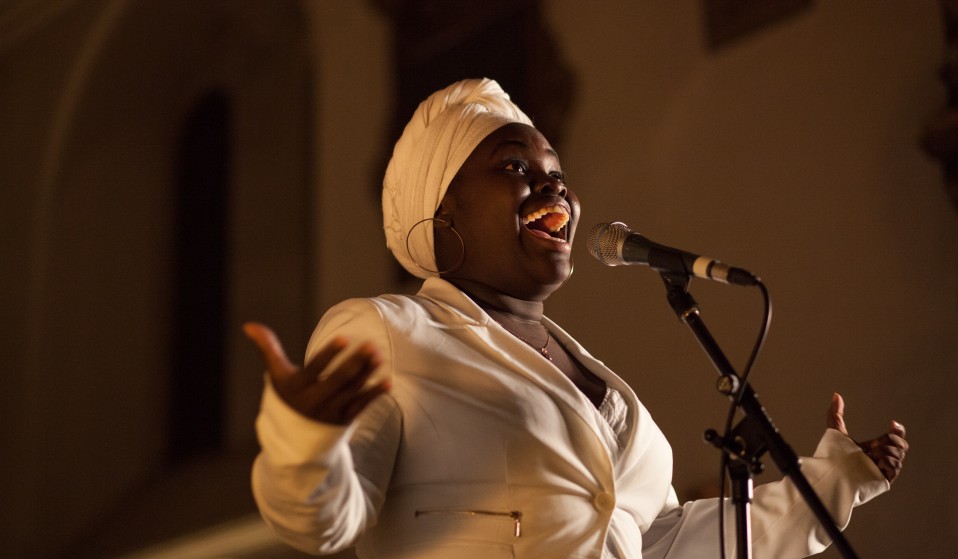 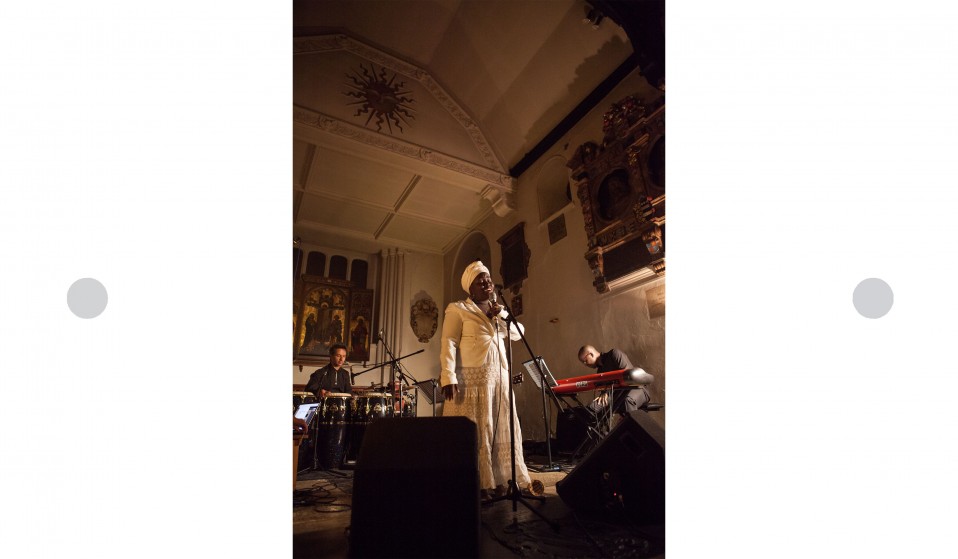 “My life just changed,” explains Cuban singer Daymé Arocena. “It’s like you’re reborn.” Aged 22, Daymé went through a seven day ritual to be inducted into Santería – the religion born out of African slaves’ encounter with Catholicism during forced labour on the plantations of the Caribbean. “The names are African but we adore the same saints, the same virgins,” she explains. “A friend once described it as a fusion, but I said, ‘No, it’s syncretism.’ It’s like when you have a mother and a father who have a child. That child has things from the mother and father but it’s a new person. It’s not a fusion, it’s more than that.”

Already a prodigious talent who had wowed audiences both inside and outside Cuba, Daymé feels the ritual allowed her to open a new chapter in her life, in which she finally took centre stage – announcing her spirituality-infused neo-soul to the world with her remarkable debut album Nueva Era. When we meet in Havana’s historic, wood-panelled Egrem studios, she’s pushing forward at full speed: recording for Gilles Peterson’s new Havana Cultura project, centred around Afro-Cuban rumba; taking Peterson and his filmmaking team to concerts and parties around the island for an accompanying documentary and there’s a new album in the works with his production partner Simbad.

A year ago, on the first day of her Santería induction, Daymé was taken to the river to cleanse herself of the past. Much like a baptism, she slipped out of her clothes to be immersed in the water and pass symbolically into her new life. She spent the next seven days in a room filled with animals and plants, shut off from everybody except her grandmother and the Oba, or priest, who would read her past, present, and future, and assign her Orichás, or saints, to guide and care for her. After receiving Yemaya, the saint of the sea, and Ochún, the saint of the river, on the seventh day she emerged into the church, completing her transformation. “You become more spiritual afterwards, you’re blessed by the gods,” she explains. “You should believe, because after I got my saints my life just changed.”

Cuba is a cultural crossroads, where Yoruba mythology and Christian lore; hymns and spiritual chanting; palm oil, cocoa butter and animal sacrifices come together with bread, wine and holy communion, to create Santería. It’s a rich melting pot in which African rhythms meet European instruments and where the innovations produced have travelled on further around the globe to touch jazz, hip hop and even house and club culture. And many of these swirling currents merge in Daymé herself.

Daymé studied Bach and Mozart, Brahms, Strauss and Stravinsky before settling on jazz – not a popular choice in Cuba, compared to salsa, reggaeton or rumba. She experimented with violin, trumpet, piano and guitar before realising her voice was her instrument. Growing up in her grandmother’s house she was immersed in Santería and adored the Cuban boleros she sang around the house after a few sips of rum. “It was always in my blood,” she explains. “The influence from Santería was in my music even before I got my saints. My grandmother influenced me because she sings beautifully and is so open-minded. She’s 60-something and she still dresses like a teenager, with high heels. She’s so beautiful and such a sexy momma.”

At school, Daymé founded Alami, an all-girl jazz band. After graduating they were invited to perform in the Jazz Plaza by Cuba’s Minister of Culture, where she met Canadian jazz saxophonist Jane Bunnet. Bunnet was blown away with what she heard and invited Alami to join big name Cuban jazz players in Maqueque to play in Toronto. Gilles Peterson first heard Daymé perform as a teenager, but recording sessions for his Havana Cultura: The Soundclash project in 2014 lead to her signing with his London-based Brownswood Recordings and her debut album.

In May 2015, Daymé performed her first solo show in Europe to a sold-out crowd at London’s St. Pancras Old Church. “It was one of the best nights of my life,” she explains. “Even before the show I was so happy and when I came through and saw so many people I felt a beautiful energy.” As flickering candlelight danced against the empty mojito glasses littered around the Victorian chapel, Daymé took the stage in bare feet and an all-white robe to perform Nueva Era live for the first time. She opened with ‘Madres’, “composed to my saint Yemaya” and held the crowd in awe throughout. The album is predominantly jazz, showing off Daymé’s impressive range and influences by dipping into pop and soul; english and spanish, but it’s the tracks that draw on her Santería roots that are highlights – and evoke the strongest reaction from the audience.

Daymé’s warmth, openness and infectious laughter easily create a tight bond with the crowd, and she appears totally comfortable in the limelight – which she puts down to her upbringing in Havana’s creative but rowdy Diez de Octubre neighbourhood. “People are always in the street getting funky,” she explains. “You should get the spirit from the people on the street. Even after I studied classical music, I’m proud to be a street girl. I am always laughing, talking loudly and I talk about my personal life in my concerts. Diez de Octubre gave me that: because my area is too open, they share everything.”

Daymé’s street knowledge has served her well on the world stage, but it’s rare for Cuban artists to gain the international exposure she’s received. Few opportunities to record, restrictions on travel imposed by foreign embassies and very limited internet access make dialogue with the outside world difficult for musicians. “In Cuba to get this is a huge step,” she explains. “Because we are like 50 years late, 50 years behind. We are almost on another planet so to have someone bring you into the contemporary music world, to help you share your music with people, that is a dream for Cuban musicians and I am so lucky for that.”

Linkedin
RELATED ARTICLES
OTHER ARTICLES
Afro-Cuban rumba’s pumping rhythms have influenced house, hip hop, jazz and beyond. Musical explorer Gilles Peterson followed the rumba beat all the way to Havana for new new album and documentary that explores the genre’s huge impact.
Fiery twin sisters Ibeyi tap into their Cuban roots to create powerful contemporary spirituals.
Cuban surfers are among the most dedicated in the world, risking imprisonment to find materials and relying on donations from foreigners to get boards and leashes. Never mind the blockade.