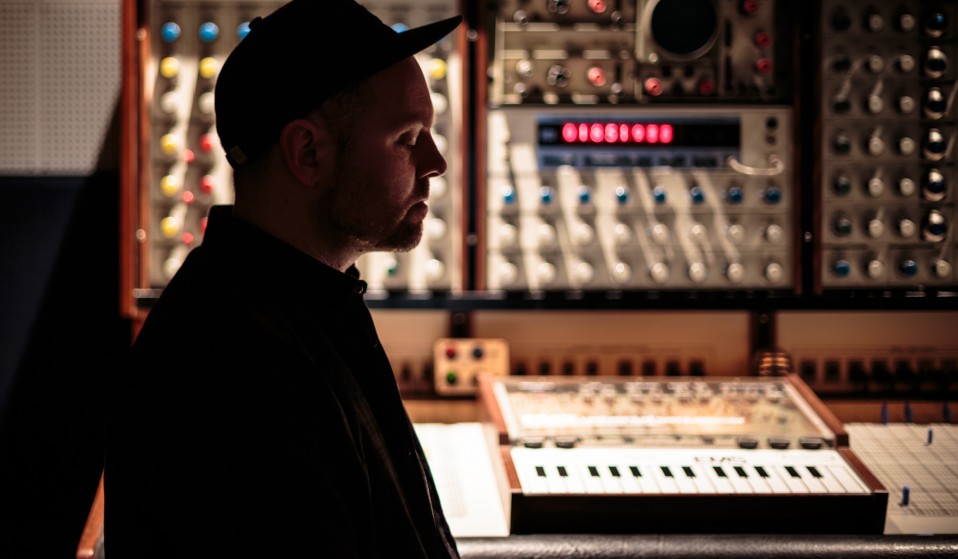 Twenty years on from Endtroducing, the production pioneer explains the mentality that’s shaped his career.

DJ Shadow believes in following your instincts at all costs, steering clear of crowd-pleasing even if it makes life more difficult. Twenty years on from his seminal album Endtroducing…, the production pioneer talks us through the mentality that's shaped a singular career.

It might be difficult to imagine now but Josh Davis was an innovator long before the world embraced him as DJ Shadow. As a middle-class suburban kid in Davis, California, he learned how to mould genre-bending beats while still in school, even co-founding the underground label Solesides by the time he got to university.

Today, Shadow’s name is inextricably tied to 1996’s Endtroducing…, his first and most famous album. Sounding like nothing else that had come before it, the record turned a chaotic array of source material into a postmodern masterpiece – setting the benchmark by which his four albums since are inevitably judged.

But it’s the trickle of low-profile releases and collaborations in-between LPs – as well as the music he showcases on his own label, Liquid Amber – that reveals the bigger picture: someone who’s constantly exploring the possibilities of music for its own sake.

The only time Shadow even entertained the idea of homogeneity was on his last album: 2011’s The Less You Know, The Better. It was intended as a parting gift to listeners who may have felt alienated by the more extreme elements of his catalogue. But that didn’t work, he says now. Nobody heard the damn thing.

So this time, for new album The Mountain Will Fall, Davis took his first DJ gig in 10 years and began immersing himself in the minutiae of what it means to make contemporary music. Now that he’s come out the other side of that process, Shadow explained some of the most important insights gleaned from the very outset of his journey.

“One of the many reasons I could never make Endtroducing Junior or whatever is that if I ever start making a track and I feel like I’m treading familiar ground, I just shut down creatively. I can’t continue. So that’s why with every album I always try to mix it up, whether it’s making music on a new platform or reaching out to a different type of artist.

“That’s also why I don’t make albums every year or two years: I feel like I need to live and experience things and learn from my peers, not only from the present but the past – things I never listened to before – to have something to say or even just to know what to say. To me, a career is this ever-expanding geometric shape and I’m always trying to add a new plane to it. I don’t want to go over the same portion I’ve already done.”

“It’s really difficult for me to externalise or anticipate people’s reactions. And I think on a certain level I probably shouldn’t try to do that, especially during the music making. I thought everybody would hate ‘Organ Donor’. I thought [Mo Wax’s James] Lavelle would ask me to take it off the record.

“The only reason I felt that way is because I made it really quickly and it felt fun. It wasn’t difficult the way most of my songs are, so I thought he would just hate it. But I hear music all the time that I think will be a hit and then isn’t. I hear music I think is terrible and it becomes a massive success, so I definitely do not have that skillset to be able to anticipate – not only in my music but in other people’s – what’s going to work or not work.

“I’ve had more knock-backs than success, definitely. If you’ve been making music as long as I have, you have to put aside any distant memories of selling 40,000 copies in a week – of a 12-inch! Now you’re like, ‘Five thousand people were willing to download it for free – yay! We’re makin’ moves!’ You definitely have this massively re-calibrated notion of what success is. But that shouldn’t be why you’re doing it in the first place anyway.”

Recognise what getting ‘in the zone’ really means

“To me, good music always has a certain amount of sacrifice connected to it. In all honesty, any second-guessing I do isn’t about, ‘Will people like it?’ or ‘Will this person I admire think I’m cool?’ It’s more about feeling like I’m in touch with my ability to make emotionally resonant music, so I have to allow myself the space to tap into that frequency. That means if I have a day where I look at my phone and it’s like, ‘Right, got a call with my lawyer at nine, then an hour to work on music, then a haircut, then more music’ – those days don’t work out for me in terms of creativity. I need a clean slate.

“It’s taken 25 years of making music to become efficient at knowing what the right circumstances are for me to tap into a certain subconscious frequency. That’s not to say I have some gift or anything. But from listening to spiritual jazz – the only genre that talks about things like ‘God frequencies’ – it’s been rewarding for me to experience that music and learn about that because I never knew what to call that connection I was trying to make.

“Everyone calls it ‘the zone’ but you can be in the zone and still not tap into the frequency. There’s more to it than that. It has to do with a state of mind, a clarity and a willingness to lay yourself out there, to go to places that you maybe don’t want to go on a regular basis.”

“The one thing I wish I’d done a little bit more is to be aware of the moment when you’re ‘that dude’. What I mean by that is I had no idea when I was ‘that dude’. I was getting all these offers submitted to me; all these people from Hollywood were calling me up. I didn’t realise the currency I had in that moment just after Endtroducing… came out. There were any number of opportunities. I was literally offered to remix the Star Wars theme. And sure, some of them sounded like shit ideas and still do. I turned down 99 per cent of them. But I thought, having never gone through it before, that once you were the dude then you always would be. I quickly realised, ‘Oh wait, I’m not the dude anymore. He’s the dude.’ It’s the next person to come along where all of a sudden everyone wants a piece of them.

“And I guess while I don’t regret any of my decisions, I wish I had been more aware of what I was experiencing. Rather than possibly consider some of those things that were thrown my way, instead what I did was kind of let James [Lavelle] and Steve Finan, who was the other half of Mo’ Wax, navigate me towards committing exclusively to UNKLE directly after Endtroducing…

“Again, I don’t regret it; don’t begrudge them. Nothing like that. It’s just that by choosing to do that, I didn’t realise what I was inherently choosing not to do. I wouldn’t change it but [if I could go back] I would tell myself, ‘Just be aware and try to enjoy it more.’ Because I don’t tend to enjoy the very rare successes that come along. Most of it is varying degrees of disappointment. The odd occasion you do have genuine success, it’s kind of hard to trust it. I didn’t feel like I was allowed to enjoy it at the time.”

Be careful how you balance craft and career

“I’m very much a pragmatist. I do free shows all the time but I can’t do that if I don’t also do shows that pay me money. Because I have bills. I have two children. I have a lawyer. I have a manager, a publicist. I have a business manager. I have digital management. There’s literally a machine that needs to be fed on a monthly basis. Somehow I’ve figured out a way in my mind to be creative and true and inherently sound and to be able to protect what it is that I do…

A profile of DJ Shadow appears in Huck 56 – The Independence Issue. Buy it in the Huck Shop now or subscribe to make sure you never miss another issue.

The Mountain Will Fall is out on Mass Appeal.

Linkedin
RELATED ARTICLES
OTHER ARTICLES
Theo McInnes’s photos of the annual event provide an intriguing snapshot of contemporary Britain.
Photographer Becky Tyrell went down to the fading banger and stock raceway to meet a community desperate to keep it alive.
As she gears up for the release of her first book, the 24-year-old climate activist talks standing up to authority and building a more inclusive movement.
A new exhibitions brings together the work of photographers who documented the deep unrest of these pivotal decades.
A new film from Berghaus traces the story of Adam Raja, who left behind a turbulent upbringing to discover the healing power of climbing.
Activists and campaigners are fighting back against new laws that would seriously undermine the ability to take industrial action, calling it an attack on fundamental workers' rights.