Art & Culture / Music / ‘Punk can be horrible and parasitic and judgemental’ 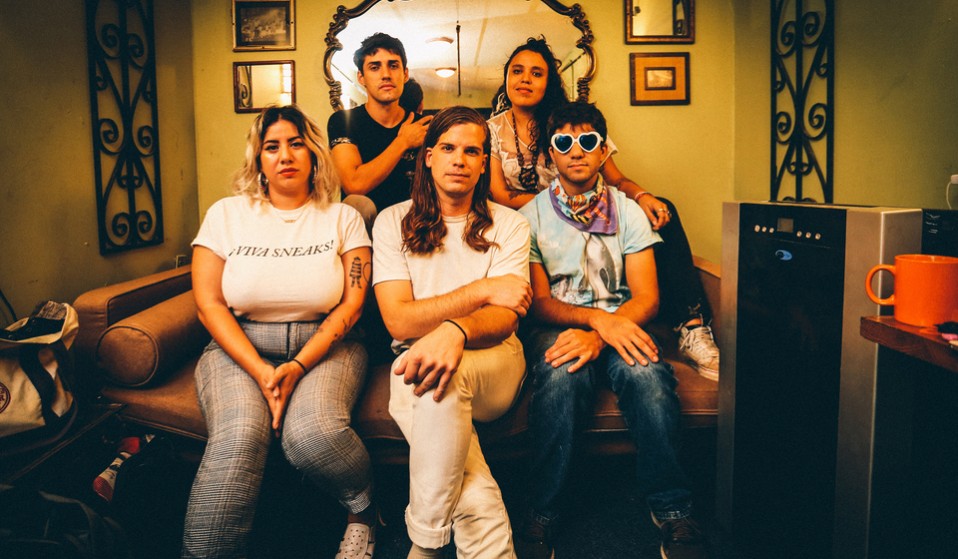 With their powerful live shows and politically charged lyrics, Downtown Boys are bringing punk music into 2017 – tackling everything from Trump and DACA to homophobia.

With their powerful live shows and politically charged lyrics, Downtown Boys are bringing punk music into 2017 – tackling everything from Trump and DACA to homophobia.

It’s 7PM on a gloomy British Monday, and Downtown Boys are sitting backstage at The Dome in Tufnell Park, waiting to start the first London show of their tour. The mood in the room is subdued – the five-piece have been caught in the English rain, and are looking a bit sniffly. But looking at the stage a couple of hours after the interview, you’d never be able to tell that anyone’s got even a hint of a sore throat.

With passionate speeches that sound more like spoken word poems in their cadence, lead singer Victoria Ruiz weaves real-world politics into the group’s live performances. Although the subjects of the songs are heavy, tackling exploitation, institutional violence, racism, and misogyny (to name a few), the energy of the gig is hardly sombre. In fact, the anger present on stage is one that challenges – one that says “fuck you, we’re here to stay, and we’re not scared of you.” The crowd passionately agrees.

The band started in Providence, Rhode Island, where Victoria Ruiz and guitarist Joey DiFrancesco met while working at the same hotel and trying to unionise. And although the line-up is flexible, formed of many friends from different bands, today we’re speaking to: Victoria Ruiz (vocals), Joey DeFrancesco (guitar), Mary Regalado(bass) and Joe DiGeorge (sax).

The punk energy that drives the Downtown Boys is clear – it’s in their political message, their unabashed energy, and in Joe DiGeorge’s X-Ray Spex-esque saxophone – but they’re not keen to remain comfortable in a singular genre. They’re also not afraid to criticise a scene that – despite being revolutionary and offering a space of shelter for many – has been guilty of heavy contradictions and of ignoring anyone other than straight white men.

“I think for me, it has been a big struggle to be a part of punk,” says Victoria, piping up after a thoughtful silence. “As a participant, I really loved it. I loved going to shows, I loved being able to be either completely anonymous, being myself at a show or being with friends, and finding community. There’s a place for everyone to be a spectator.”

“But,” she continues, “as a person who eventually had power and a seat at the table in punk, it became horrible and parasitic and judgemental. It completely killed my desire to be a part of its community. Because it sees anyone who tries to leave it, as someone who’s ‘sold out.’”

Downtown Boys have not been shy about calling out bad behaviour or music industry bullshit – via their written outlet, Spark Magazine, they have called out the Coachella festival in regards to the anti-LGBTQ views expressed by its owner, as well as what they believed to be unfairly distributed wages. They also signed an open letter addressing SXSW’s “deportation clause” towards international musicians.

Using their songs to address political matters that are often left untouched due to their inaccessibility and purposeful hyper-complexity, the band is not constrained by the English language, covering songs from Yugoslavia and beyond, as well as writing in both Spanish and English. The video from their latest single, “Somos Chulas (No Somos Pendejas)”, for example, was made in response to Trump’s decision to end DACA – a move that will affect many immigrants in the United States.

At a time where politics are driving many of us to the point of desperation, being so heavily involved in it daily can get exhausting – but when asked about self-care, bass player Mary Regalado tells they turn to the music itself.

Saxophonist Joe DiGeorge agrees, adding that music is particularly important in times like these. “[There’s] this analogy that music is sort of a prism through which you reflect and refract the world that exists, and you bounce it back inside yourself, and it comes out. With music, you can exaggerate the spectrum and pick out these feelings that are in the white noise of the world and get the individual colours out of there. That’s something I think about on stage.”

It’s not easy to constantly be seen as a hyper-political band – the pressure is high, pigeonholing is rife, and the dissonance between the hyper-capitalist music industry and remaining true to your principles is challenging, according to Victoria. But they have no intention of backing down.

“Right now in the United States, we have a fascist president, and everybody is finding a way to use their platform to protest,” she tells me. “So protest music is becoming more of a niche that the media is paying attention to. It’s always been there, it’s always been powerful and it’s always been by people of colour, women, and non-gender conforming people.”

“But now the media is paying attention to it more,” she adds, pensively. “So the challenge and the stakes are very very high, but our truth and who we are as a band never changes. And that’s what becomes your guiding compass. So as long as you can find the prism for the light to reflect and refract, and become infinite, you’re ok. But that prism gets shook by time, and I think that being in an overtly political band makes that shaking even more intense.”

The Downtown Boys are currently on tour – find out how to see them here.

Linkedin
RELATED ARTICLES
OTHER ARTICLES
Yohon Tatum, aka Legendary Father of the House of Tisci, reflects on nurturing a new generation of talent.
A group of aid workers face prison for helping to save people fleeing their homes at sea. If they are charged, it will have a chilling effect on humanitarian efforts.
A new film from Berghaus traces the story of Adam Raja, who left behind a turbulent upbringing to discover the healing power of climbing.
Mass crustacean die-offs in the North East have led a community of fishermen to take action to save their seas.
After blocking the Scottish government’s gender recognition reform bill, Westminster is now devising further changes to the law to make it harder for trans people to self-identify.
A new law change is enabling Britain’s donor-conceived children to know the truth about their origins – but campaigners say the fertility industry must do more to protect people.