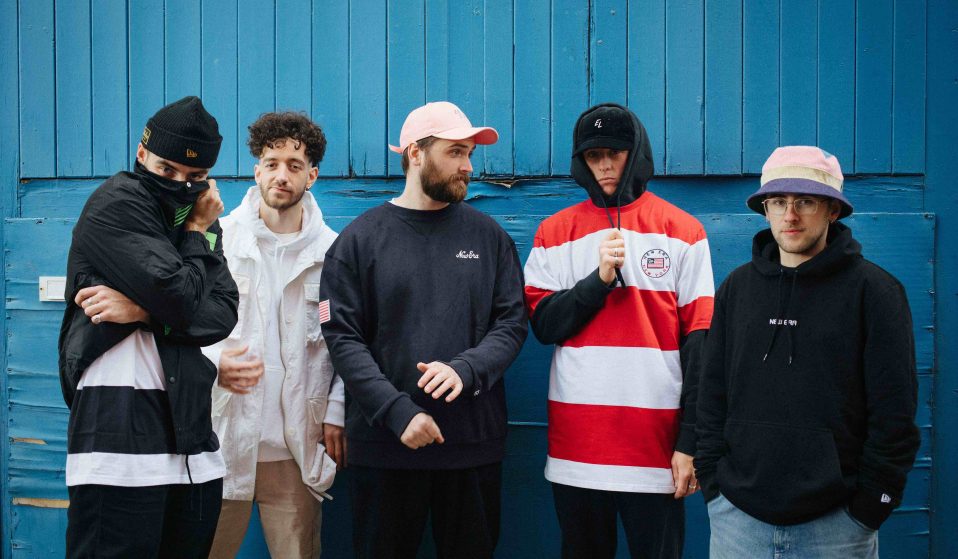 We catch up with the Leicester quintet to talk inspiration, innovation and their involvement in New Era’s The Music Generations project.

To mark their involvement in New Era’s The Music Generations campaign, we catch up with the Leicester quintet to talk inspiration and innovation.

Easy Life are an alternative R&B quintet from Leicester. Dubbed one of the most promising emerging voices in UK music, their latest album Life’s A Beach narrates a trip to and from the titular location. It’s an amalgamation of melodies and arrangements borrowed from pop, funk and dance music – all of which come together to journal the highs and lows of being young.

The band are currently appearing alongside the likes of rapper-producer AJ Tracey as part of New Era’s The Music Generations campaign. The project sets out to capture the wealth of talent within the UK scene by inviting different artists to provide their own interpretations on style, through the creation of their own bespoke, limited-edition collections.

Transposing the lightness of their music into the line, Easy Life have colourfully reimagined the classic 9FORTY cap as part of their involvement, as well as sharing their own unique take on the 9TWENTY, which been fashioned in timeless black velour to work as a staple piece. The collection aligns with the philosophy of Life’s a Beach – a genreless testament to making the most out of life’s twists and turns.

To celebrate the collaboration, the five-piece — scaled down to lead singer Murray Matravers and drummer Oliver Cassidy today — sat down with Huck to discuss experimenting with personal style, hometown glory and their eclectic sound.

Murray Matravers: Well, we always wear caps. The five of us are always in New Era. We’d get approached by brands from time-to-time and some of those we declined. But when [New Era] approached us it was sort of an obvious choice and one that felt natural. Cassidy had a huge collection of New Era before we even teamed up with them.

Oliver Cassidy: Yeah, Sam – our bass player – and I, we were mostly the ones wearing caps because we’ve always got bedheads. I think we’ve all always found our way and done whatever feels good. But just in terms of influence: Chance The Rapper, he did a great campaign [with New Era] and we dig his music. We’ve always respected his style and that was another thing that pushed us to collaborate with New Era.

MM: Baggy tees, clothes hanging off us, double XL everything, that’s always been our style – even though I’m about five feet [laughs]. But I guess also, practicality is important for us. That’s why the cap thing was great. It keeps you warm, it keeps you cozy, all those things. But I agree with Cass that we definitely tend to do our own thing. There’s five of us [in the band] as well, so you’ve got to remember we’re individuals. I can’t speak as a whole band, but we try to bring ourselves. We’ve just found our own style as a band. 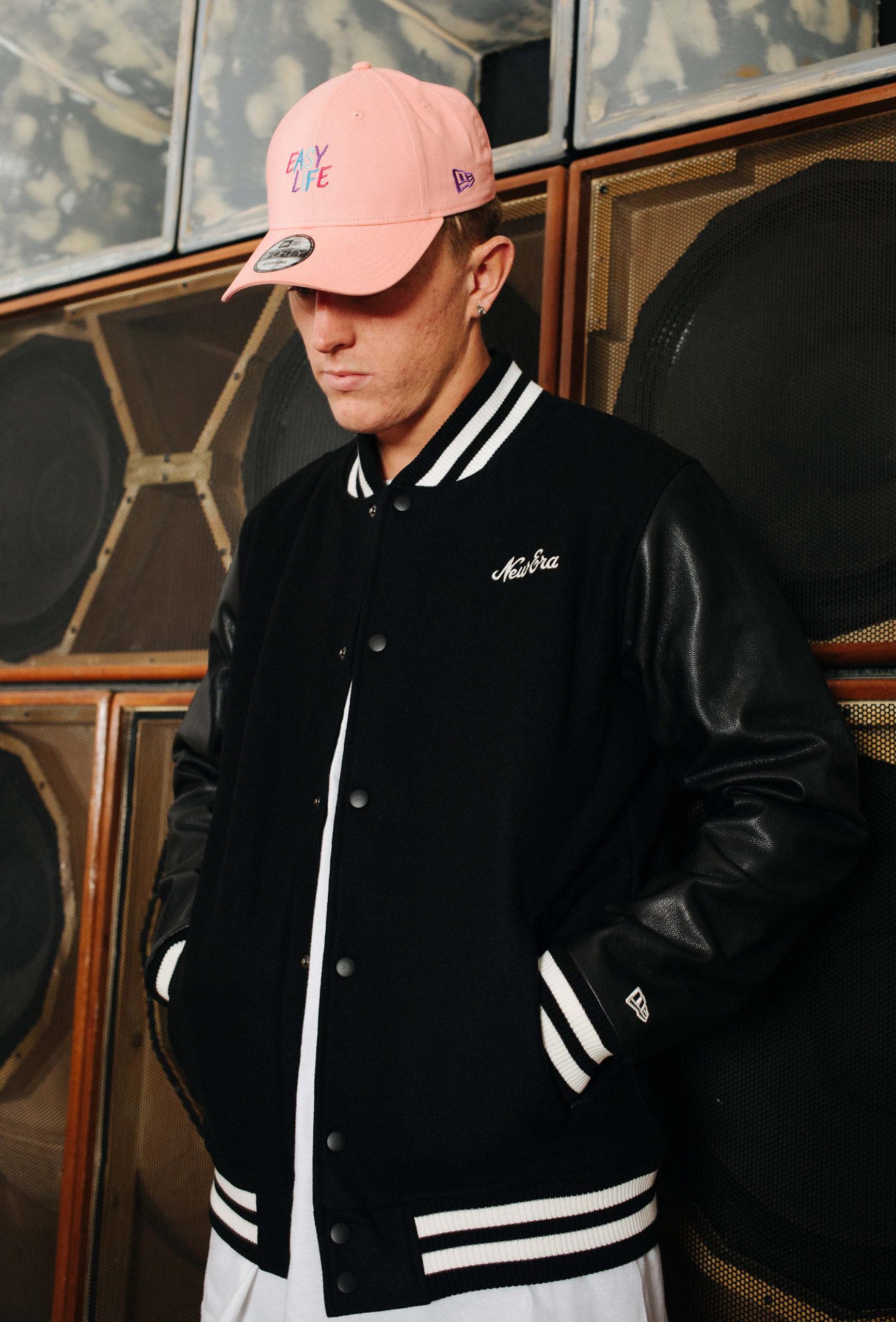 Can you talk me through the designs?

MM: So the piece I’ve got on at the minute has this leopard print lining and it’s this soft-to-touch velour material. It’s got a peak you can fold easily and throw in your bag, that way it doesn’t get destroyed.

OC: Especially since we travel a lot, it was important for us to have a piece that you could just shove in the bottom of your bag. But I think everyone needs a black cap in their collection. You always need something in your wardrobe that’s simple.

MM: On the flipside, we made a crazy bucket hat for all the mad kids we see at festivals. It’s this pastel corduroy number that ties in really nicely to the colour palette in all of our artwork and our everyday style. That was  definitely a shout-out to them.

OC: Our third one in the collection was a 9FORTY cap with ‘Easy Life’ printed in pastel colours. It’s very colorful, each of the letters is different.

MM: I think we’re pretty easygoing as people, we never take ourselves too seriously. In fact, when we were designing the headwear we’d make them look well ugly – then it got to a point where it was like, ‘Guys, we need to make this look okay.’ Put it this way: the one I’m wearing now did not start off looking like this. But it’s the same for the music. We start off on one end, and then we dial it back a bit afterwards – to make it more cohesive.

You mention, particularly with this collection, that this headwear is still going to be cool in 20 years, just as they were 50 years ago. With that in mind, how important is longevity for you as musicians

MM: I mean, New Era is legit isn’t it? We’re super stoked for this collection to come out with them.

What was your journey like coming up in the music industry?

MM: I’ve been writing music my whole life. With Easy Life, it was a bit different, we were experimenting, I started to do a lot of production. At the time that we formed we were having a laugh. All five of us were in dead-end jobs, going nowhere with it all and we felt frustrated – as a lot of young people are right now. We started the band to counter that frustration and those anxieties.

We’d get together and write music after work and then for some reason we got signed and here we are. It was mad because growing up I thought you had to write music that other people loved in order for it to be successful. But as soon as Easy Life happened and we were digging everything that we were into, things seemed to work out much better. I have to constantly remind myself to have fun and that everything eventually falls into place. 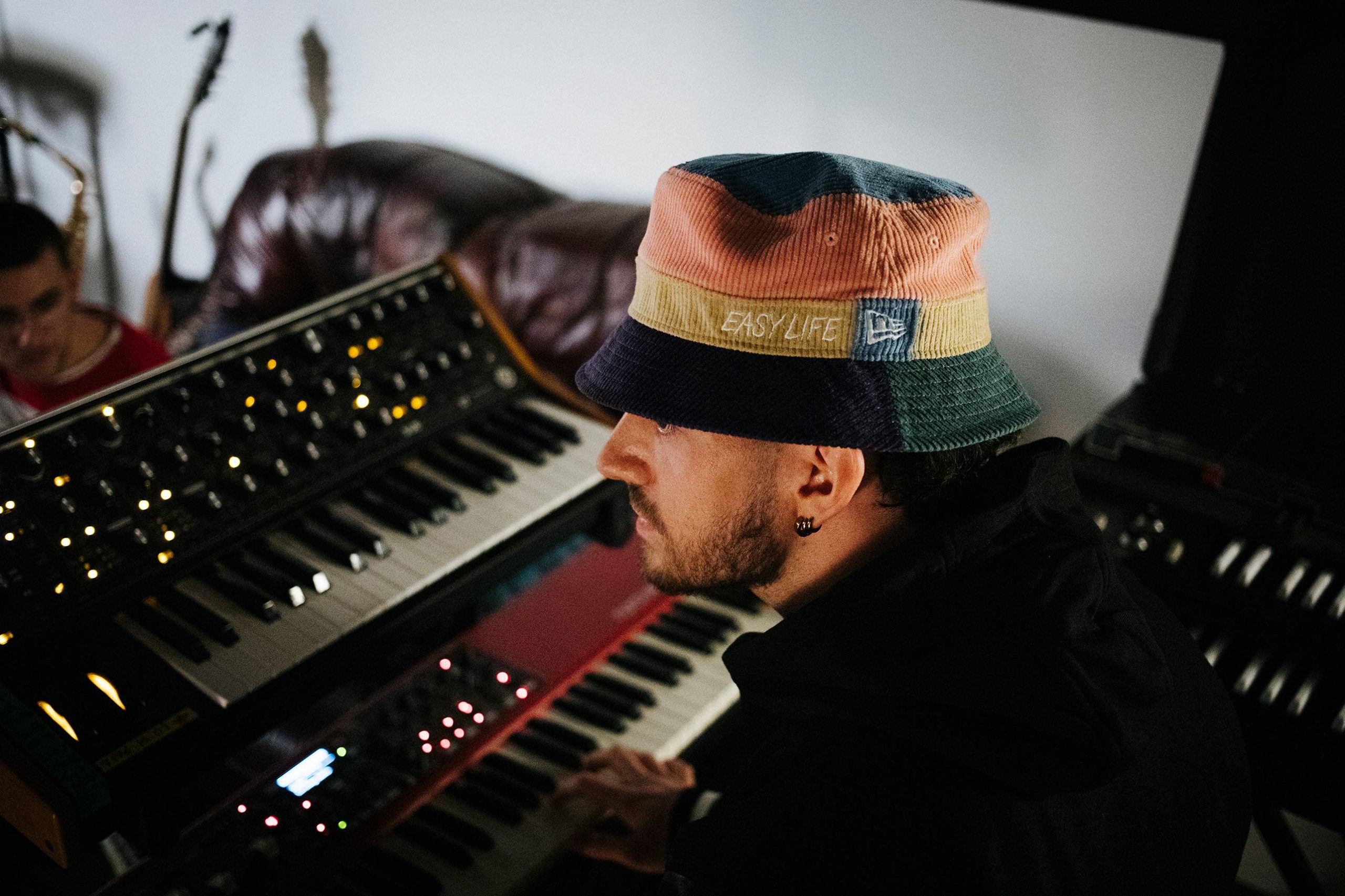 You approach those anxieties with such a vulnerability in Life’s a Beach. Softness, humour, contradicting masculinity – these are big themes in your music.

MM: There’s a lot of fronting and masculinity in the world. With the band, our music has always been about [playing on] how anxious and insecure I am. I wanted people to know that’s okay. Maybe the reason it started working in the beginning for us was [because] people could relate to that. People put you on a pedestal, ‘the singer from a band that I like’, and they think you’re indestructible – when actually, I’ve got so many problems I’m trying to deal with. As artists, I felt talking about it is important. Because it might help.

Leicester is a huge part of your story and it’s a place with a lot of different identities. How has it influenced your artistry?

MM: We bang the drum for Leicester because no one else is. It’s such a key part of our identity and like you said, it’s such a melting pot of culture and music, much like most cities in the UK. But Leicester is unique because we have this huge Indian, African and Eastern European community.

Where we started – a place called Narborough Road – that’s the most diverse road in the country. Coming from that, it made us feel fearless because we could pick and choose things from different cultures and genres because that’s what Leicester is. It definitely informed our sound. We haven’t done this, but it was like, ‘Of course we can make a drill record or a samba tune because why not?’ Anything goes in Leicester – our sense of fearlessness and creativity comes from there.

Shop the first collections now at New Era, or through JD Sports.

Linkedin
RELATED ARTICLES
OTHER ARTICLES
Priti Patel’s Bill relies on falsehoods around the illegality of channel crossings and will only endanger refugees.
Photographer Jake Miller recounts travelling to Chernobyl to capture the relics of a former way of life 30 years on from the nuclear disaster.
A new exhibition is celebrating the activist, abolitionist, and feminist, and exploring how she utilised her image as a tool in the fight for freedom.
Why is the Labour leadership alienating Green New Deal campaigners as the planet burns?
British photographer Tariq Zaidi recounts documenting a subculture of people making bold fashion statements on the streets of Brazzaville.
In 2024, breakdancing will feature as an Olympic sport for the first time – but what does this mean for its radical roots?